Back at PAX East this year, our own Eliot Lefebvre checked out a weird and wonderful new MMORPG called Destiny’s Sword. It’s a tactical MMO, with a focus on “community-first” PvP and management of your squad’s psychology and mental health. There’s nothing else like it in the MMO space: This is a game intentionally “highlighting the long term consequences of conflict” instead of just, you know, mindlessly sending murderhobos on toward their next genocide.

2Dogs Games Creative Director Ken Hall has graciously penned a dev diary for us this week explaining the impetus behind the studio’s decision to pursue such an unusual angle for an MMO. Enjoy!

Since we announced Destiny’s Sword, we’ve received a lot of questions from the community about why we have such a strong emphasis on mental health. While not the singular focus of the game, the effect that the more visceral gameplay elements have on characters is an important one and provides players with a unique take on the “typical” MMO experience.

Why Focus on Mental Health in a Combat Game?

Early in his development career, Destiny’s Sword creative director Ken Hall created the award-winning historical flight sim, B-17 Flying Fortress : The Mighty 8th. Part of Ken’s role on the project was to liaise with the veterans and research their experiences. It became obvious early on that most of the books and films about the war experience only talked about the few seconds per mission when the crews were pulling the triggers. They were not exploring how the men kept themselves and each other going in a foreign theatre for years on end, or how they got back onto the aircraft after getting wounded, or losing their friends.

Inspired by these stories, Ken compiled an audiobook of the experiences of British sherman tank veterans. During the course of interviewing these gentlemen in their 80s, Ken learned that some of them still woke up on their bedroom floors in terror, “trying to get out of their burning tanks”.

The scars of combat and trauma can last a lifetime, and as a team, we felt that our entertainment could do a better job of depicting these long term consequences. In Destiny’s Sword we saw an opportunity to explore some of these consequences in a way that raises the profile of mental health for everyone.

How Does Mental Health Affect Gameplay in Destiny’s Sword?

In Destiny’s Sword, players command a squadron of troops in futuristic combat. There are the usual things we’d expect to see in an MMORPG: diverse skill and ability development, the crafting and upgrading of super-cool technologies, and a rich narrative that is affected by the player’s decisions. But when the dust settles, what affects the gameplay most is how a player’s characters are feeling.

Along with the physical effects of combat, a character’s emotional state will also affect their performance. Additionally, what a character experiences, both in combat and also in the metagame, will affect the way they think and feel. It’s a circular relationship that has the player’s fingerprints all over it. 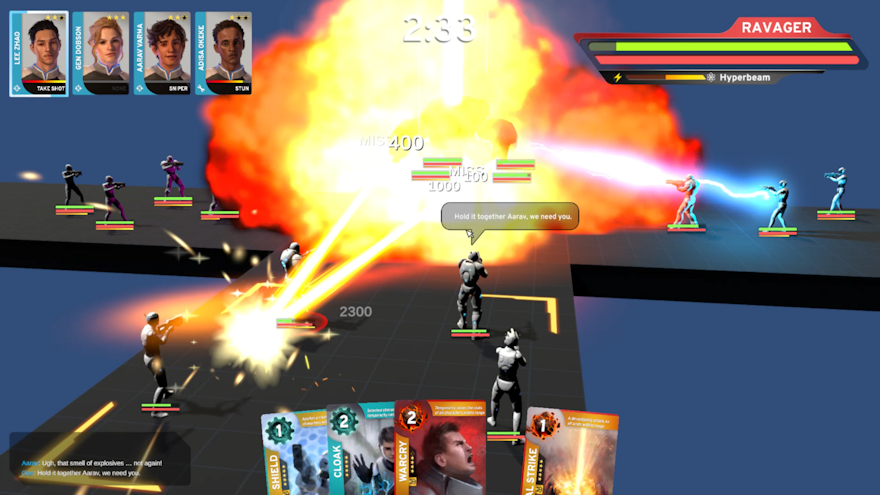 A character’s personality will filter the way they perceive events. Some characters may live for adventure, while others will be meticulous planners. Some may be chatterboxes who seek constant interaction, while others may want to engage in conversation only when necessary.

Each character will react differently to events depending on their personalities, so getting to know what makes each one tick is key for players who want to give their characters the best chance of success.

Characters also have an emotional state matrix – a graphical representation of emotion that is inspired by Robert Plutchik’s theory of emotions. It consists of 8 axes, representing a character’s level of basic emotions, which include: Anger, Vigilance, Joy, Trust, Fear, Surprise, Grief and Disgust. These emotions can be combined to express over 80 different feelings in our characters.

Each character has a base emotional state, toward which they gravitate. A character’s fear may spike if they see a spider, but then it will quickly gravitate back to their typical value. A letter home announcing the death of a parent may induce a spike of grief, but over a slightly longer time, this too will pass. Repetitive trauma, or severe incidents can not only displace the characters emotional state, but they can even affect the underlying base state, adjusting a character’s emotions in a more long-term fashion. 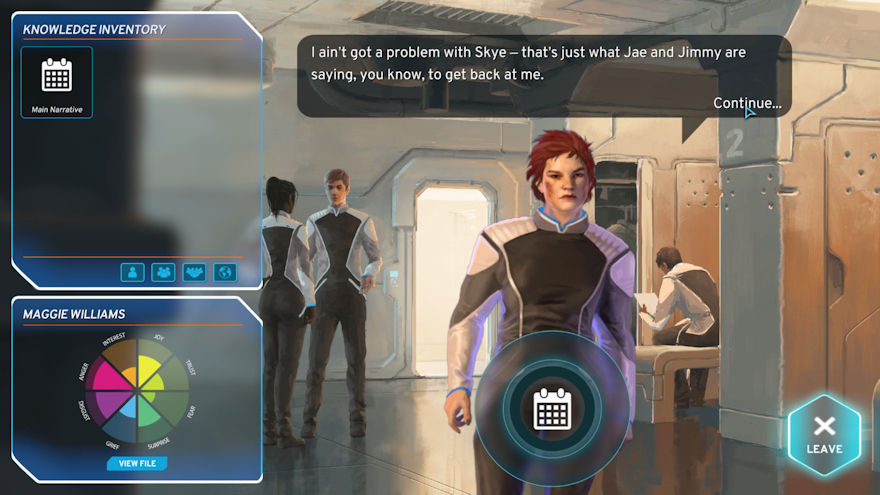 Some characters may develop a synergy with each other, gaining bonuses and benefits from being together on a combat mission, while others may experience discord, and rub each other the wrong way, leading to performance reduction when they’re together.

If characters experience positive events or sequential victories together, they will begin to form a positive connection to each other. If they experience repeated defeats, or negative events, they may start to distrust or dislike each other.

There will be a wide array of cues to draw the player’s attention when something is amiss. Characters may ‘bark’ (a verbal expression during a combat mission). Players may notice performance issues, like a character acting slowly or missing turns, being highly inaccurate, or not responding to commands. There may be non verbal cues that the player can pick up on in dialogue, like bags under the eyes of a character who’s not sleeping, or a bruise on the cheek of a character who’s getting into fights.

The more a player gets to know their characters, the easier it will be to spot issues that need to be resolved, ideally before they become serious problems. Players can help their characters manage their emotions by putting them in appropriate situations (if a character doesn’t like heights, don’t send them on a mission in the high mountains), they can dialogue with them to resolve perceived problems (if a character feels they’re being left out, they can reassure them), and more. Just taking the time to talk to the characters and help them navigate daily situations will build a stronger relationship between player and character and help that character to become more resilient and more likely to come to the player when they have an issue.

When a character does experience severe mental health issues like PTSD, depression, anxiety and addiction, the player’s goal is to encourage that character to seek treatment and then support them through the recovery process. As the commander, players can order a character into treatment, but it will be much less effective than if the character seeks help willingly.

That’s something was really important to us – the idea that we all suffer with mental health issues from time to time, and that it’s not a sign of weakness to reach out for help and support.

How Do You Make Something So Serious Into A Fun Gameplay Experience?

Although we deal with some serious issues, Destiny’s Sword is a game first, and that means we want it to be fun. Many daily events for characters are positive experiences, and players are rewarded for empathic interactions with their characters and other players, rather than penalized for their mistakes. This provides a safe and fun environment to learn and develop useful communication strategies.

We also wanted to make sure we weren’t adding to the stigma that all mental health issues are major psychotic breaks, or that those suffering are unstable or dangerous. Most of the time in Destiny’s Sword, mental health is just something you help your team manage, like their equipment or ammunition. It doesn’t define them, you just have to take it into account. 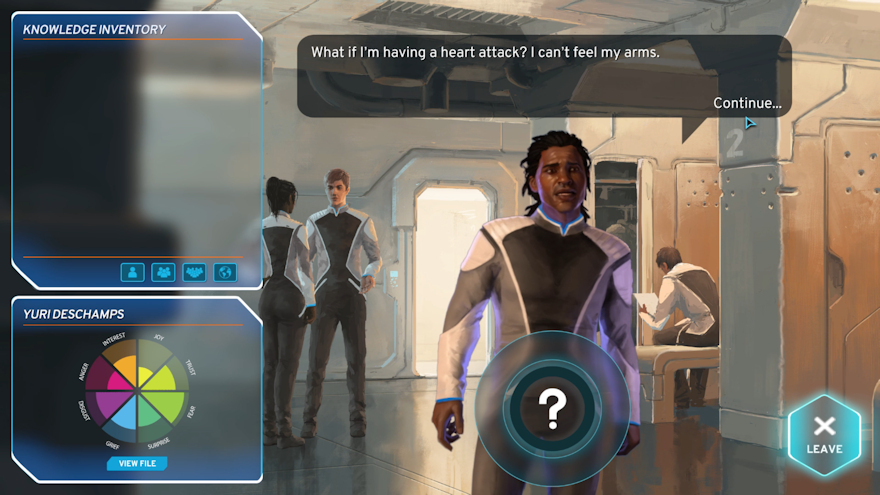 Even when a character does experience something more severe, just like in life, the key to recovery is community support. The other characters and players will all rally around and help in the recovery process, ultimately bringing everyone together and forging a stronger team.

Destiny’s Sword is a game that encourages cooperation and collaboration, and ultimately, interacting with other players to create a shared story is what online gaming is all about!

While coming up with the idea for such an important feature was easy, making sure that it is implemented correctly is a much more difficult process. To ensure that we were heading in the right direction, we reached out to a number of organizations for guidance.

Working with experts from these respected organizations helps us to achieve our goal of creating a healthier, more rewarding gaming experience that promotes cooperation, compassion, and empathy.

By ensuring we’re including the best practices as defined by these organizations, we’re aiming to make our players feel valued, both by us and by one another, as we work together to create meaningful gameplay and social connections.

In the big picture, we’re hopeful that the message sent in Destiny’s Sword will carry over into the real world as well because who doesn’t believe we could use more compassion, cooperation, and strategic thinking in today’s world?

We’d like to thank the devs from Destiny’s Sword for sharing with our readers! You can follow them on their official site and on Steam too. And don’t miss our past coverage of the game as it’s wound through development:

GDC 2018: Depictions of violence and war in video games and Destiny’s Sword
Advertisement