[We’re updating at the end; scroll down for the latest.]

According to Canadian news outlet Journal de Montreal (now verified by several other Canadian news agencies), the physical building where Ubisoft Montreal (among multiple companies) is housed is under some sort of hostage situation, a revelation that’s sending shockwaves across social media this afternoon.

Overhead helicopter footage from yet another Canadian outlet shows dozens of people milling around on the roof of the building (presumably for safety, as they appear to have barricaded themselves outside); Le Journal says there’s a “large security perimeter and several police officers in the area” with other staffers supposedly “barricaded in conference rooms.” However, Montreal police have not actually confirmed what’s going on, only confirmed the “ongoing police operation.” CBC reports “heavily armed officers” descending on the scene.

There is an ongoing police operation at the corner of Saint-Laurent and St-Viateur. We ask people to avoid the area. The #SPVM is currently validating information and more details will follow. pic.twitter.com/44PjWzsCOh

Ubisoft community rep Eric Pope has been tweeting about the situation, saying he’d been “on a call with folks at the office and they had to leave abruptly.” He also tweeted a photo from another news channel, saying, “This is my team on the roof.”

apparently. was on a call with folks at the office and they had to leave abruptly

this is insane. this is my team on the roof. pic.twitter.com/xT12NpTALF

We’ll update as soon as we learn more.

CBC reports now that the situation “seems to be related to an armed robbery.” No injuries have been reported.

Montreal police say officers were dispatched to the scene following a 911 call. No injuries have been reported. Montreal Mayor Valerie Plante says her team is in close communication with police and is monitoring the situation. She urges people to avoid the Mile End area. 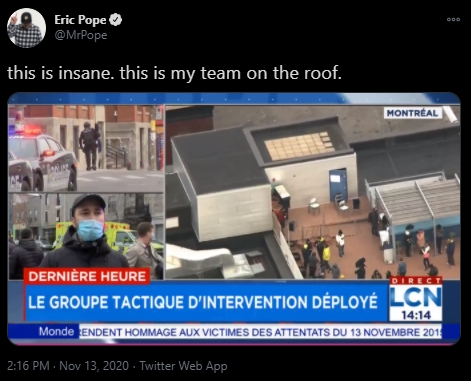 No threat has been identified for now. We are currently evacuating the building. #SPVM https://t.co/7g7eHU2B1T

This was alarming because its a bit too close to home (both geographically and social circles).

Do we get OT for this?

You know someone will ask that for having to stay late. Up on the rooftop.

Being “Swatted” is the first thing that comes to mind…

It’s a confirmed hoax call as per CBC:

“The 911 call that sent police and ambulances to the offices of a Montreal gaming company on Friday was a hoax, police sources have confirmed. ”

I’m glad to hear it wasn’t a real threat, but i’m also annoyed that people are still doing fake calls like these, resulting in a crap ton of lost money and added psychological stress on the people.

Surprised they dont catch them more often. I remember when I was a kid there were a couple bomb threats to the school and they caught both of them.

It’s probably also far easier to spoof the numbers these days than it was back then. They get caught eventually if it is a constant thing.

Hope it’s a false alarm. Would rather that, than an actual event. Even better if they prosecute the person responsible for a false report, if it is one.

If this turns out to be a SWATting, I hope they find the person responsible for calling it in and make a F’n example of them.

imnal but I did do police work up here, and it is going to depend on the age of the swatter, when they find him/her.

Canada doesn’t play around with that, thankfully. They try the idiots who do these things as terrorists. Age may play a role, but they should still have a long road ahead in order to ensure they understand what is and is not acceptable. Frankly we coddle kids who do these things a little too much.

We coddle kids who do a lot of bad shit way too much. Bullies are a prime example of coddling too much. They never get in trouble, but you fight back you will. Kids don’t learn that there are repercussions for their actions these days because no one punishes them properly.

True enough, the point being that we as modern society seem to have forgotten that sometimes love must come a little tough.

I mean it’s not GOOD…but the update that there’s no hostage situation/Ubi wasn’t targeted is “good”.

Hope they can resolve the armed robbery issue without injury or incident. Appreciate the speedy updates on this, MOP!

Holy shit haven’t these people been through enough?

Horrible news. That looks like a lot of employees still working in the building. Hoping this turns out fine.