While many tech companies are offering up weak quarters or even outright struggling, Nexon’s financials are on the rebound. The company’s Q2 investor report this week saw revenues increase significantly compared to Q2 2021 – a boost from ¥56B to ¥84.1B. The majority of those revenues are counted in Korea and China, of course, with two-thirds still on PC.

So which games are responsible for the boost? FIFA Online 4, Dungeon&Fighter, and MapleStory once again. In his prepared remarks, CEO Owen Mahoney chalked the successes up to “how Live Ops impacts game performance” specifically for MapleStory, which saw a 38% revenue boost this quarter following a decline in 2021. If you read between the lines here, Mahoney is effectively arguing that Nexon’s transparency when it comes to gambleboxes brought back lapsed players with renewed trust in the company.

“The MapleStory franchise launched in 2003 and has been on a steady – if non-linear – growth trajectory ever since, including a near-doubling of annual revenue in 2020. Over the last 3 years it has grown at CAGR of 25%, and is now in its 19th year. Growth in a live game over such a long period of time has never been done in the global games industry, not even close. In 2021, players voiced concerns about probability disclosures related to the purchase of in-game items. The entire sector was put on notice, but Nexon was uniquely aggressive in responding. We expanded disclosures on in-game purchases and opened a new and ongoing channel of communication to get input from players. This process resulted in our prioritizing stronger relationships with players over short-term monetization. These initiatives meant slowing monetization while adding new content to excite the base and bring back players. Net Promoter Score – or NPS – an important indicator of player satisfaction – tells the story of how the team in Korea has strengthened player trust. In July of this year, MapleStory recorded a Net Promoter Score that is actually higher than the great year in 2020. Throughout this period, our communication to investors has been clear and consistent. In 2021 we urged investors to not worry about short-term variance in monetization, and that MapleStory’s best days are still in front of us. Our results in Q2 and early in Q3 support that prediction. Thanks to best-in-class live operations, MapleStory is back in position for dynamic growth in what will soon be its third decade of operation.” [Emphasis ours.] 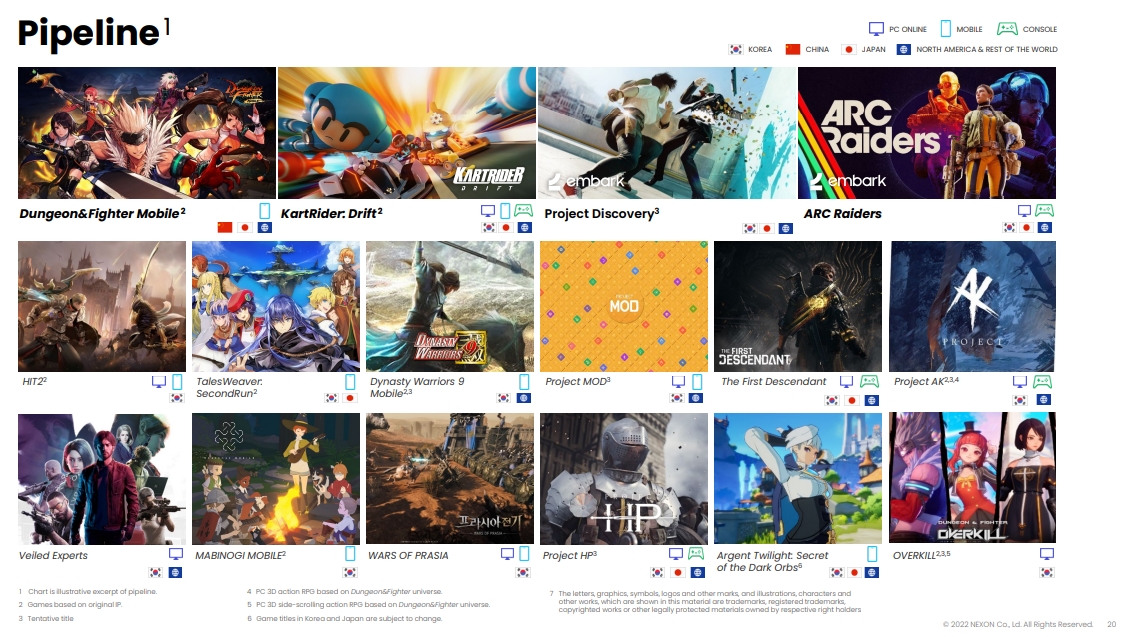 Meanwhile, Nexon-owned Embark Studios announced a delay for ARC Raiders, bumping it back to 2023. Embark explained that ARC is just one of the games it’s working on and that it’s decided to release team-based first-person shooter Project Discovery first rather than try to release two games at once.

An update from the team: pic.twitter.com/0J3imUtZP4