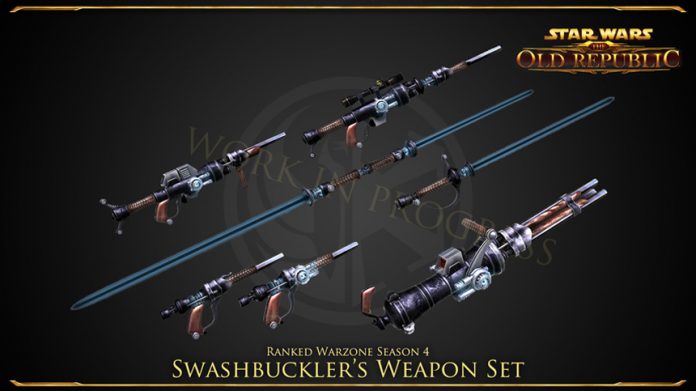 END_OF_DOCUMENT_TOKEN_TO_BE_REPLACED
In previous PvP seasons for Star Wars: The Old Republic, players never had a clue what the rewards for their efforts might be until midway through the season. But this time around, BioWare has teased us with a single image of the weapons we can expect.

According to the official post, these weapons are called the Swashbuckler’s set, but they aren’t the end of the rewards. The developers also hinted at “decoration trophies, unique titles, a unique color crystal, a beaut of a mount, and a Top 96 character reward” to be revealed later.

They don’t look as badass as they should, but any new update for this game is a must and we should be happy they are actually trying to make the game less boring.

I don’t PVP much in that game beyond my desire for a few pieces of the warzone here, as the PVP is meaningless outside of that, but I won’t mind if this gear shows up re-skinned in a cartel pack :P

I have to admit, if there’s on area being based off the Star Wars ip that heavily holds this game back in terms of typical MMO carrots (hold the snark, “only one!?”, and misc. swtor hate, please), it’s that they basically have an entire avenue of the barbie effect they are unable to do much with. You can only design so many subtly different lightsabers, after all.

Shaddoe I suspect it’s probably a reskin of the Rishi Legend Vehicle, given that all the other rewards are Rishi based.

Xijit Greaterdivinity None of them do, its just lazy photoshopping.

Oh my god that crystal color.  If I were still playing SWTOR I would be all over that color combo.  Light Blue + Black is pretty much the color combo I always use for stuff when I’m able to.

I’m wondering what “a beaut of a mount” means. It sounds a bit like overselling to me.

Guild Wars 2 takes fans through a tour of the new...