Let’s stop being realistic for a moment. Let’s assume that a game currently running can get a complete visual overhaul. Not changing the overall art style or anything, but have an entire new graphical engine, a total reconstruction from the ground up, all of the graphics of a game that’s been in development and just released but with all of the systems of the existing game. Like taking Ultima Online and giving it the same visual polish and fully 3D look of Anthem, for example.

So which currently operating MMO would benefit the most?

My personal vote is for games like Lord of the Rings Online, games with sufficiently modern systems and design that are still looking a bit janky in the visual department. Of course, some people just want classics to be upgraded; I can’t begrudge people who want World of Warcraft to have the same level of visual upgrade you see in Warcraft III: Reforged, for example. So which game would you pick as getting the biggest benefit?

Final Fantasy XIV could do with some environment and texture improvements. The Realm Reborn zones are detailed but too tiny, while the expansion pack zones are quite the opposite (the Gyr Abania zones are so barren and low-texture I almost thought I was playing FFXI, though that is likely the zones working as intended).

Adding an optional HD Mode with higher-quality textures, more grass and non-intrusive environment models, more physics/animations/effects, would greatly affect the game’s aesthetic. A lot of people like to recommend better shaders and the like, but without improving textures and aesthetic details it would be akin to putting lipstick on a low-poly pig. Once PlayStation 5 inevitably releases, this would be a good thing to time the release for.

Anarchy Online. Add SWL to it if they have room.

A visual upgrade might help LOTRO if it included an engine upgrade. Not too many folks are really running a 32 bit OS these days.

What I mean by that nebulous, non-commital answer is that I’m always very worried that any attempt to update something will lose its aesthetic. So for every Spyro Reignited, you’ll have a number of sorry entries like The Secret of Monkey Island: Special Edition (the second, thankfully, did better).

The issue is, really, that you need artists that fully understand and appreciate the aesthetic of the game. This is why I often find HD texture mods of older games dubious at best. Some absolutely nail it, whereas others butcher an otherwise at least serviceable look. So, again, for every Thief II HD, there’s an Elder Scrolls IV: Oblivion texture pack.

Sometimes I can understand where Bethesda is coming from with their bitterness over mods, but with their later games being so homogeneous, lacking in both aesthetic and narrative identity, and being utter bug fests? I can’t say that I feel especially bad for them.

Whether official or unofficial, remasters can ruin what was once incredible. So I always view them with utter trepidation. There are so many art design leads who believe they know better than the original designers of the game, who’ll take the game’s visual identity off the rails rather than just bringing it up to spec with contemporary expectations.

One example of this, unfortunately, is World of bloody Warcraft. Isn’t it always? Some of the HD updates are nightmarish at best. 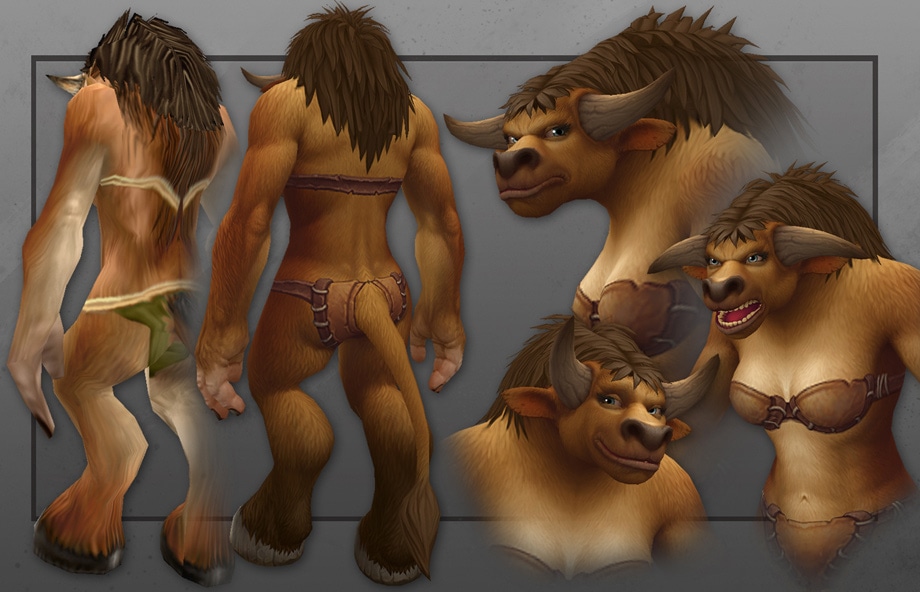 Someone needs to inform Blizzard of what lady bovines look like. Since it isn’t a gorilla with a flanderised feline nose and a goofily extended face. The old models were so much better… so much. 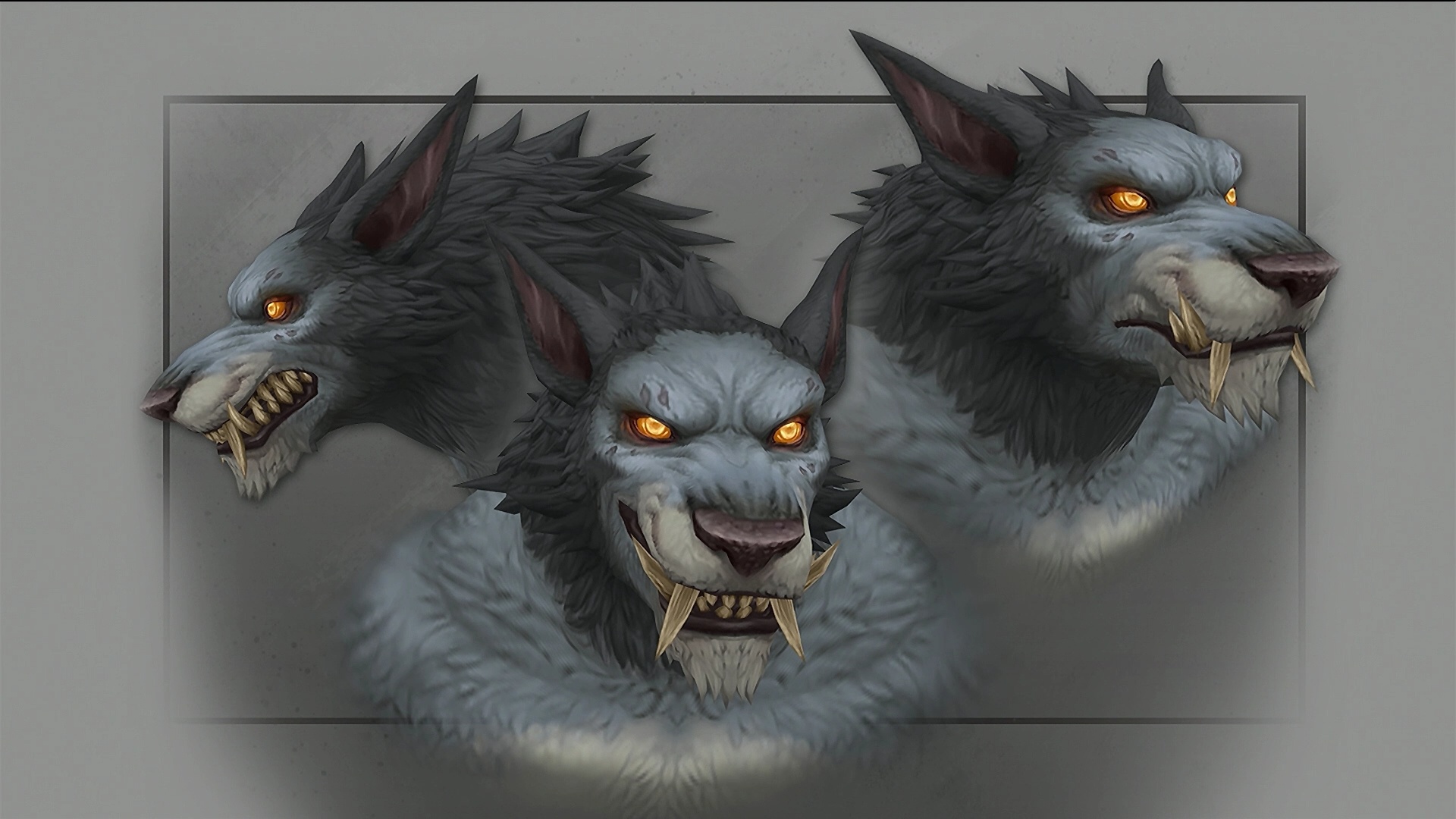 What a bug-eyed mess. The eyes are so unnecessarily large and detailed, they looked better as glowing, beady little orbs. It carried the bestial look so much more than whatever this travesty is supposed to be. 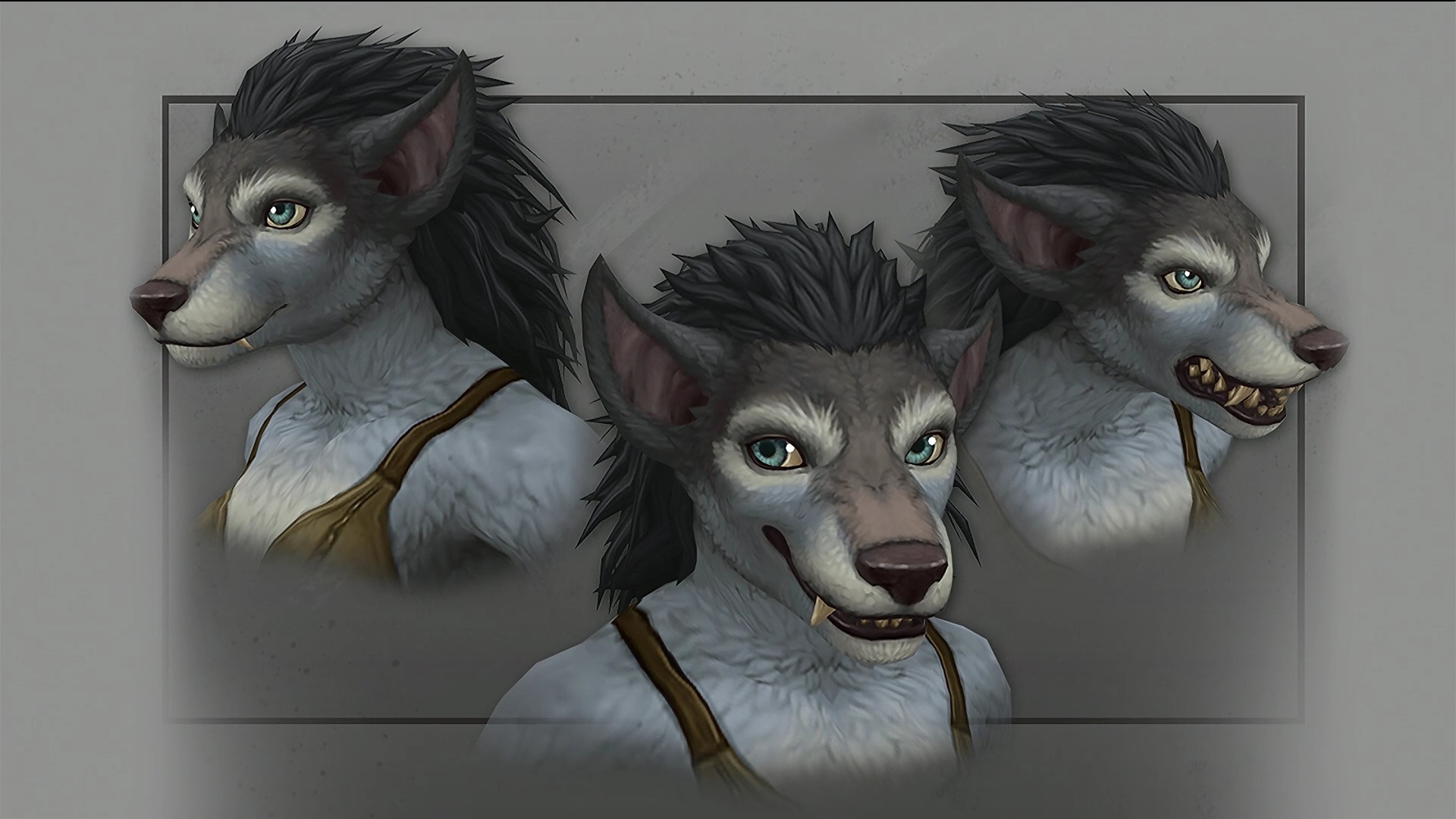 “Hi, so I just got back from watching Zootopia with the kids and I have the perfect solution to our chihuahua problem!”

I’m as big of a Zootopia fan as the next person. I mean, I would’ve initially said even bigger, until I read about just how popular and successful it is. That made my head spin, as I wasn’t expecting an audience to have so much of an appreciation for something so outside of the sphere of homogeneity that’s become so common in modern entertainment.

Worgen, including the women, are supposed to be fierce werewolf analogues. And neither gender’s aesthetic could own that descriptor, now.

Yes, there were elements of the alpha worgen that I wish they’d kept (teethsplosion doesn’t do anything for me, but the streamlined fur and ears was an improvement), but generally, at least the males captured the essence of what they were supposed to be. Even the women, too, sometimes, and from the right angle.

The original model for worgen women could actually be tweaked into something that could be respectably considered feral and ferocious.

The Zootopia suit, though? Unlikely.

This is why a graphical update isn’t Universally a good thing. If you’re an artist with a decent understanding of aesthetics, then you might even appreciate the muddier textures and lower-poly models over most proposed updates. I use TES IV as such a stand-out example as I feel not even the community could understand what they were trying to do with it.

They were attempting to evoke an idyllic, fairytale aesthetic akin to Twilight Princess. Now, I know, they weren’t nearly as successful at this as Nintendo was. That’s a given, as we are still talking about Bethesda here and they’ve never been what one could justifiably call a creative powerhouse (with Morrowind being the only, odd blip). Still, though, I appreciated the effort and there were moments where they hit their mark and it was a beautiful game. And other times, not so much.

The vast majority of texture mods and graphical updates wash the game out, trying for a hyper-photorealistic aesthetic that doesn’t suit it at all. There were some mods that really did do wonders for the aesthetic, though, like the Unique Landscapes series of mods. Yet for the most part, those that actually improved upon what Bethesda attempted to create were few and far between.

A focus solely upon realism is the sign of an amateur artist as it betrays a lack of imagination. An artist’s talent is inexorably linked to how much they can develop their imagination, their capacity to dream, envision, and then realise. The very best artists are known for their ability to create hauntingly unusual pieces which defy expectations.

Even in classical paintings that one might think of as “realistic,” there are many stylistic, romantic, and aesthetic choices made to weave a narrative, message, or motive into the work.

Sometimes, a pipe is not a pipe.

Punching up fidelity is fine, it doesn’t do much for me but at least they’re preserving some of the original aesthetic. The very best examples, though, are those which can capture the very spirit of the original work, the feel of it and what it’s meant to evoke. It always stuns me that people don’t realise the effort that’s involved with this even in games aimed at much younger audiences.

It’s why I cite Spyro: Reignited Trilogy as one of the most impressive examples of late. They really captured the feeling that Insomniac was going for, and updated it without losing any of the qualities of the aesthetic. That approach is far better than simply layering on fidelity when it can be achieved.

The problem with fidelity is that it’s just noise. And that noise can get in the way of whatever the artist was trying to achieve with the more limited tools at their disposal. Instead of improving the work qualitatively, it negatively impacts the feel of the aesthetic as it can be difficult to see beyond the noise. That’s why no one tampers with Okami, for example.

That’s why I’m dubious and hesitant whenever I hear of a remaster of a game. I don’t share in the excitement and hype as so many of them are middling to bad.

I don’t know what else I can say about this. For the most part I’m fine with the aesthetics of the older games I play, I don’t really require that they be updated in any way as I worry it would lose what makes them so meaningful to me.

In closing, consider Dungeons & Dragons Online: Stormreach, and what was achieved with the more limited technology at the time. Just think about how adding noise or completely changing that aesthetic would affect the game. It looks ancient, yes, but I’d question whether it would really need an update. A question I’d invite everyone to ask.

None. For better or worse the graphics is part of the memory. You will not get better memory’s by just upgrading the graphics. My thinking.

Now if were talking UI then we open a whole new can of worms. Including myself going back and playing the game anew.

LOTRO has not aged well (it looks fucking disgusting now and performs very poorly, and yes, it’s ok if you still like it, no need to tell me) so it definitely would benefit from complete overhaul, with a brand new engine with proper multithreading support and graphical fidelity to at least the level of FFXIV (or higher). Too bad this will never happen.

FFXIV could also use a better lighting and shading system – something similar to Reshade but actually built into the game so people would not need Reshade to take screenshots like this:

Some higher res textures would also be welcomed.

Great games all around, could use some love, specially in the graphical department. Just thinking about how awesome Neocron would look with some graphical investiment.

My issue is that the gameplay gets dumbed down over time so by the time an MMO needs it’s graphics updating, the game itself is barely worth playing.

That said, I’ll go for LotRO too. Whilst the game itself has no appeal left for me due to dumbing down of combat, the world itself is pretty great and I can only imagine how good it would be if the graphics were up to date. Especially the animations, which were pretty bad from day 1…..

LotRO, SWTOR, RIFT, SWL… most of them are getting outdated at this point tbh.