Runes of Magic turned 10 earlier this year, and when I saw a 10-year-old screenshot come up in my Facebook memories, I felt as if the stars were aligning for another look at this free-to-play title developed by Runewalker and published by Gameforge. Welcome back to another edition of MMO Cartographer, where we’ll do just that!

I had some trouble getting into the game through Steam and through the launcher, so let me save you the same pain: If you forget your secondary password for a Steam account, you have to contact support to clear it for you. (To give Gameforge its due, I will say the turn-around on that was pretty quick; I was able to set a new secondary password the next day.) The other issue that gave me some trouble is that you have to enter the game in the same region (EU or US) that you registered your account in or it will tell you that your information is incorrect. There’s no crying in baseball and there’s no region switching in Runes of Magic. If the URL when you register starts with “en,” that’s the English EU site, and if it starts with “us,” that’s the US. And that is how I ended up with two new EU accounts and one new US account. I am now playing on an EU server through Steam and a US server through the launcher.

I remembered almost nothing about this game, except that it looked suspiciously like a whole lot of other games that came out between 10 and 14 years ago. That’s not a slam; I loved MMORPGs back in the good (or bad) old days, and I had fun during my short run in Runes of Magic. It just felt very familiar.

There are three races to choose from: humans, elves, and dwarves. The dwarves are male only, but your dwarf can be female in your head. Who can tell the difference anyway? Each race has its own starting location, which is a nice touch. Humans start at an outpost in the woods, dwarves start underground, and elves start in a place that looks like elves would start there.

Every race has six classes to choose from, with some overlap. Some of the classes are specific to each race. Only humans can be knights, only elves can be druids or wardens, and only dwarves can be champions or warlocks. I tried out all three races and a number of classes, but I found myself playing a human mage the most, since I figured I should focus and make some progress before writing this article. 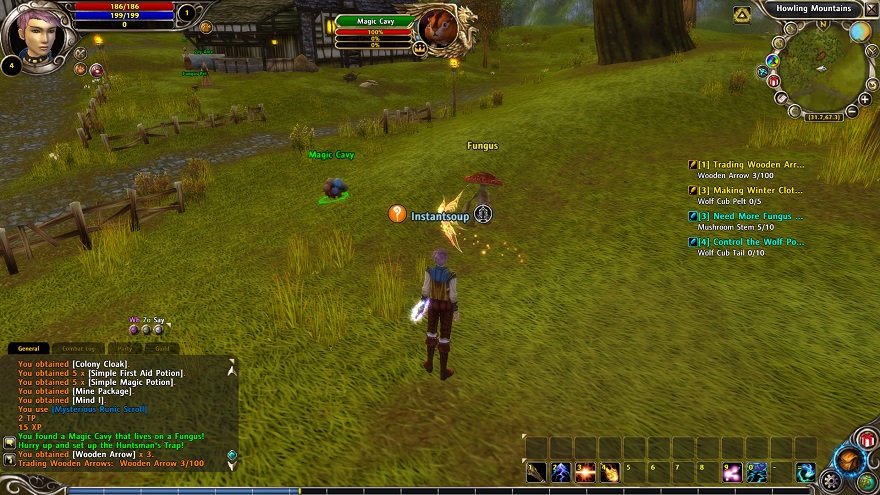 When you first start the game with your shiny new character, you will have the opportunity to do a quick tutorial instance that will teach you to move and fight before you are set loose in the rest of the game. There are some rewards for doing it, but you won’t find yourself left wanting if you don’t. Many of the newbie quests yield useful gear.

Humans start in an area called Pioneers Colony in the Howling Mountains zone. There are a bunch of NPCs standing around who have the usual sort of newbie tasks to send you out on. Nearby, there are fungus men and wolf cubs to kill in order to complete those.
You’ll also get to meet the local gathering skill trainers who will get you started on woodcutting, mining, and herbalism. If this sounds like every older MMORPG that you’ve played, that’s because it is exactly like that.

Combat is tab-target, which should not be a surprise, given its age and the era in which it was made. The pacing is not too bad; I’ve played games with slower combat. Sometimes when you kill something, a glowing icon will appear above it and going through it will grant you a short buff. 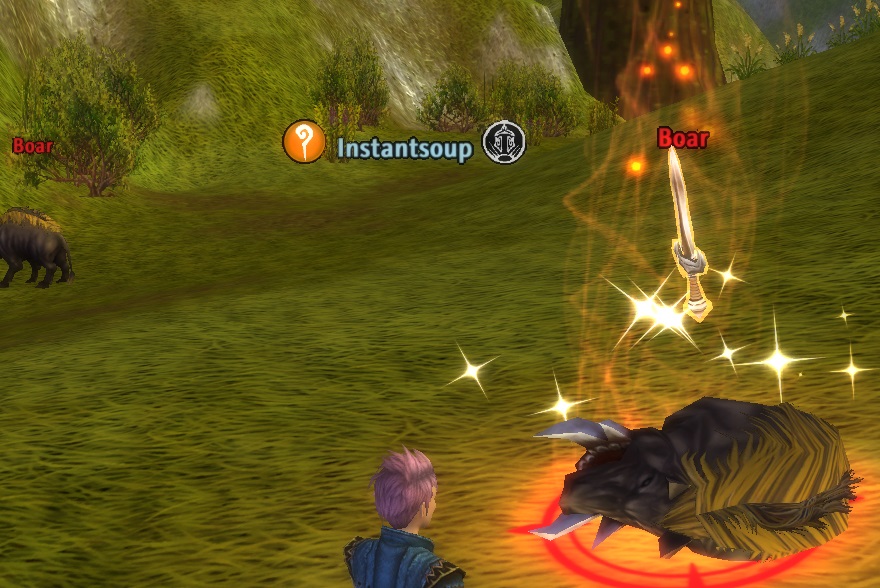 One little detail that tickled me was that there’s a sound when you achieve the requirements for quest completion that sounds something like some default cell phone text tone. It is strangely satisfying. It’s not quite the EverQuest level-up “ding,” but it is a nice sonic pat on the back.

There’s a somewhat larger town called Logar toward the center of the map. (I keep reading it as “lugar,” which is the Spanish word for “place.”) There are a number of dungeon-type area entrances around the edges of the map. You get to go into those to complete quests as you play. Logar is, as you would expect, another nest of quest NPCs. There’s also a bulletin board from which you can get daily quests, if you were possessed by some unholy urge to do some daily drudgery.

Among the quest givers is a little girl named Lola in Logar, who will send you all over Howling Mountains to gather things for a series of quests to collect her “treasures” that she has hidden. I enjoyed completing and reaping the rewards of each step of that one.

There are so many quests, I ended up outleveling the quests I had picked up before I finished all of them. I didn’t abandon them, though, because that’s not a thing I do. I will finish them all eventually. At least that’s what I keep telling myself. 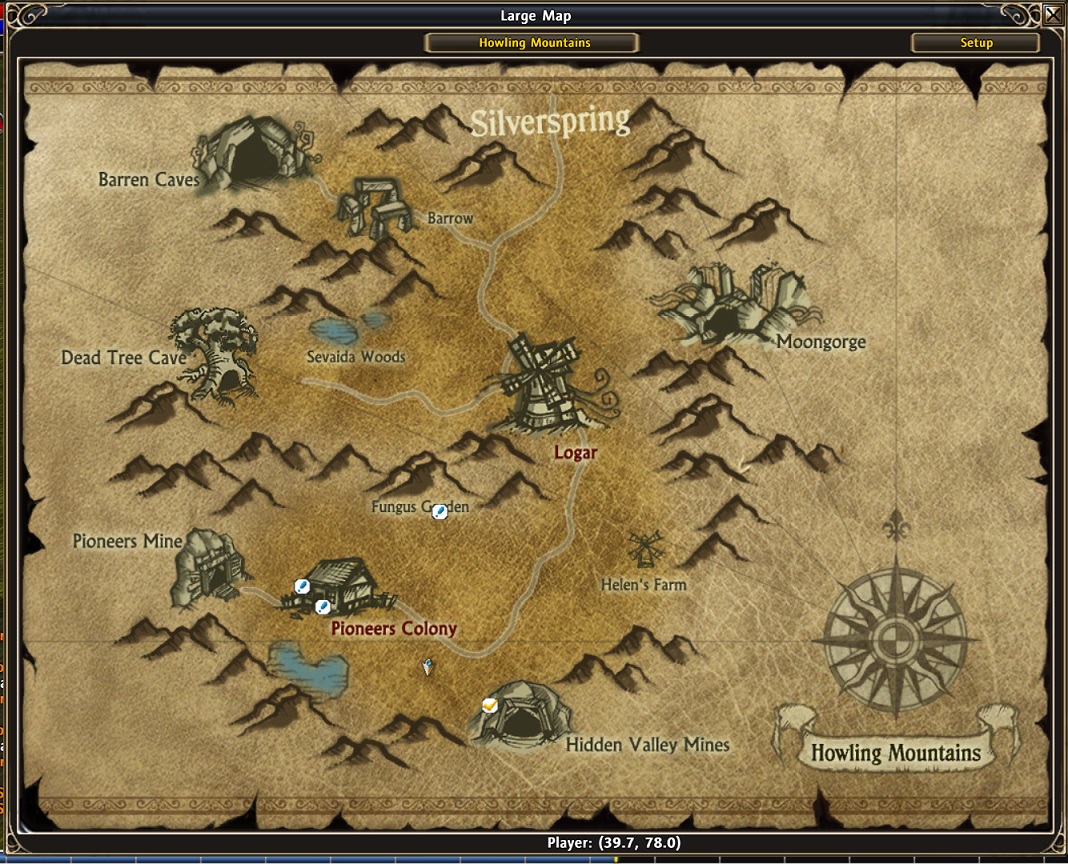 At the bottom of my overflowing quest log, I had two quests sending me to the city of Varanas in the next zone, Silverspring. The game informed me at level 10 that I could go to the city to select my secondary class, but I didn’t actually make it there until level 12.
One of the quests that sends you to the city also allows you to rent a horse for free to make the trip. I took advantage of that, since I didn’t know how long the run was, and I was about tired of running around at foot speed. It was a good long jog to Varanas from Logar.

When you get to the city, there’s a set of typical “get to know the city” quests that send you from one useful NPC to another. I did a good deal of that but left off before finishing to go see the trainers in order to select my secondary class. You have to go all the way to the far end of the city to get to the trainers.

“Sometimes at the end of a long day, I don’t mind playing a game that tells me what to do, where to do it, and how many body parts to bring back to the quest giver. It’s a stroll down memory lane.”
Outside the city, there is Silverspring, which appears to start with level 8 critters to kill, with the level going up as you go further into the zone, as you might expect.

I chose priest as my secondary class and then made it my primary class. You can switch classes there or at the housing vendor. There’s one of those that’s quite convenient in Logar. You get gear for your new class when you pick it, and there’s a convenient quick change button. After the change to priest, I was back at level one and went back to Pioneers Colony to start the process again. I put on 5 levels and decided it was time to go write.

I didn’t look at the cash shop at any point, so I can’t tell you what that’s like. I didn’t want to ruin my nostalgia trip with all that. I did see a few other newbie level characters around, and there was a little bit of world chat on both the EU server and the US server I tried out.

Runes of Magic looks and plays like a lot of games I tried out a decade or so ago. This isn’t necessarily a bad thing. Sometimes at the end of a long day, I don’t mind playing a game that tells me what to do, where to do it, and how many body parts to bring back to the quest giver. It’s a stroll down memory lane. On the other hand, newer action-oriented games have ruined a lot of older games for me, and nostalgia takes us only so far.

I just couldn’t get into it, it always felt like a cheap WoW. And considering I could play WoW on p-servers, I had no reason to play RoM. I tried it last year only because I wanted to see the zones of the game. The first Human zone looks like Elwynn Forest, I expected the second one to be something like Westfall, but it kinda looked like another Elwynn Forest, but with pine trees instead of oak trees. Not to be mistaken with Hinterlands or Hillsbrad Foothils, those zones had an entirely different feel to them. Ten I skipped that zone to go to the next one, I think it was ANOTHER forest kinda like Elwynn Forest, then the fourth one was kinda like Dun Morogh – snowy pine forest, after that I think it was a gloomy forest and after that I ran out of patience.

Part of why I love WoW so much to this day is the sheer variety of zones – for Humans you get:

There are other zones I did not mention, but I believe lack of funds (RoM) shouldn’t mean lack of imagination. They could’ve copied WoW’s zones more and it would have been better.

I’m saying this, because I really value variety in zones and the impression and feeling they give out.

I played RoM back in the day. I enjoyed it, especially class switching and housing. What I didn’t enjoy was the pay to win “runes” of the game’s title. Acquiring them and upgrading your equipment was either a deadening grind or an expensive undertaking. In those days, I didn’t like paying real money to improve my gear. Come to think of it, I still don’t. It was the first real pay to win mechanic I encountered.

The game still has the memory leak issue it’s had for years which causes the game to crash a lot for people. I love how they just ignore it. They tried to do a steam release which failed badly for them.

That is a good point. I did get the memory warning a few times and had some hiccups in performance while playing, which was a bit of a red flag, as it is a 10 year old game and I have a pretty substantial gaming laptop.

I still have lovely thoughts of playing this game when it first came out.