As gamers will recall, the UK government’s Digital, Culture, Media and Sport (DCMS) Committee panel has been investigating addictive technologies for the better part of the last year – if you saw EA’s “surprise mechanics” nonsense speech, that came from one of the committee’s multiple hearings on the topic. The committee’s research has now concluded, and it’s delivered a final report.

You can read the entire report over on the committee’s website, but the short version is that it “calls upon games companies to accept responsibility for addictive gaming disorders, protect their players from potential harms due to excessive play-time and spending, and along with social media companies introduce more effective age verification tools for users.” Specifically, it’s determined that the government should indeed be regulating lockboxes under the Gambling Act, that the sale of lockboxes to kids should banned, and that the “games industry must face up to responsibilities to protect players from potential harms,” among other things.

The committee’s summary is particularly venomous toward the games industry, saying it’s been “wilfully obtuse” on the topic, so yeah the MPs didn’t buy the awful Kinder Egg argument either.

“MPs found it difficult to get full and clear answers, expressing disappointment at the way some representatives engaged with the inquiry, particularly in acknowledging what data is collected, how it is used and the psychological underpinning of how products are designed. Representatives from the games industry were found to be wilfully obtuse in answering questions about typical patterns of play, considered essential information in better understanding of engagement with gaming. Some games and social media company representatives were found to have ‘demonstrated a lack of honesty and transparency’ in giving evidence, with the Report questioning what companies had to hide.”

GIbiz says it contacted multiple major companies, but only EA, bless its heart, replied. “We have reviewed and are closely considering the findings of the DCMS Committee report,” a rep told GIbiz. “While we don’t agree with all of the conclusions and recommendations in the report, we do take our responsibilities to players of all ages very seriously.”

Researcher stomps the ‘lockboxes are Kinder Eggs’ defense into paste

“Wilfully obtuse”. Yep, that about covers it, most days.

Great :) Good Article thanks o/ Gonna share around Wicked Wide web. Hope this affects Filthy Gaming Policies followed by Shameful Company known as EA – Electronic Arts. Then their Bad way of Handling Mmo based on biggest IP known as Star Wars: The Old Republic need to feel it. Shame on ya..

Seen the Rise & Downfall.. I & many other Veterans remember Great times & also sad downhill that’s been going on for 2+ years now in Swtor’s Development & there in general. Pre Ordered SWTOR D.Deluxe Edition. Was around from First Beta Day & Sub Since Launch up to End of 2016. Returned Oct. 2017, but Got Sad & left again cause Still Lack of Proper MMO Content & no Good Plans on sight. These sad Facts Kinda still apply on Sep. 2019 cause upcoming 6.0 now finally coming & Still release date Silently Pushed Back :o :D :D :/

“Kids buying lock boxes without their parents consent eh? Sounds like something the government should definitely get involved with, because parents certainly cant be expected to accept the responsibility of fallout from not paying attention to what their children do when given access to money, and they certainly can’t be expected to learn anything about these arcane ‘vidja games’ that must be brought to heel using unnecessary government intervention for non problems because it may get us a little extra political support to stay in office!”

So Parliament politics aside, the committee’s summary of the situation is right on point. And it should be noted that despite the obvious pressure AAAs can exert on political will the committee did not hold back.

So, what will come of this, is hard to tell. But you can bet that this report and its summary will be used by others in their efforts. Lest we forget this is a global issue and other countries will benefit.

And to those who claimed just a few months ago that nothing would really happen? I give them this little diddy from back in the day:

And to those who claimed just a few months ago that nothing would really happen?

Has anything actually happened?

Have things changed? Can games no longer sell lock boxes in the UK? Are there stricter restrictions on children games?

Whoop is the report. From nothing to worry about to a continuous fire that is not getting stamped out. 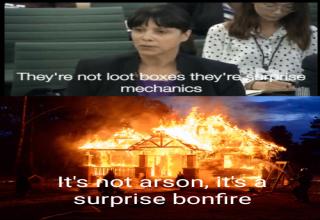 So I just got off the phone from EA and it sounded like they had a pretty good last quarter and you should keep having your fun making memes while they keep raking in YOY profits.

The report is exactly what everyone expected. More lawmakers who condemn loot boxes but concede they don’t fit the legal definition of gambling and the laws need to be changed to make them fit.

LOL! Their profits are based on the loot-boxes you have no issue with. But the golden goose is only good as long as people remain ignorant of their unscrupulous practices.

And guess what? They are less ignorant today due to this report. And here in the US, those that care now have more ammo. Not to mention what other countries including the EU might make of the information.

So, keep hanging on brother. It’s ok. Eventually, you will have to unclench, but let it be on your terms and rationalizations.

If you think I have no problems with loot boxes you have fundamentally misunderstood the point I’ve been trying to make over the various lockbox threads. I don’t want them anymore than anyone else does. They’re absolutely predatory and awful.

However what I don’t want is any ham-handed solutions that either don’t really address the issue and make it quietly go away or end up doing more harm than the problem (which is easily forseeable with some of the solutions presented).

The report goes both ways for knowledge and ammo. There are many cases in the report that state things like there’s absolutely no causal link between lockboxes and problem gambling and that there is essentially no real science in place to back up that connection. There’s also a lot of concern over psychological trickery based on data collection but they weren’t able to confirm any of that because the companies were “willfully obtuse” and wouldn’t confirm it for them.

There’s no need to hang on, my feet are firmly on the ground that very little to nothing has actually changed. People “whooped” when Chris Lee was ripping into game industry reps and absolutely nothing came of it months later. Pretending progress is being made when it’s not, accomplishes nothing.

This is a lovely accumulation of dishonesty:

(1) Dishonest politicians trying to score “vote to me” points by jumping on a popular bandwagon about “gaming addiction” and the “unsuitability” of certain games for certain age groups. Reminds me of the anti-D&D crusaders of the ’80s and ’90s.

(2) Dishonest game company PR flaks (like EA and Epic) trying to conceal that Loot Boxes are real-money cash gambling, albeit with no cash payout – or at the least, a cash payout that’s extremely difficult to cash in.

Personally, I consider loot boxes unethical (from a game design and development standpoint), and agree they are real-world, real-money gambling for nothing more than virtual items whose value is too easily manipulated by those same designers and developers.

However, regulation and its handmaiden censorship is an answer only politicians love. Residents of Germany and Australia can tell you what kind of game censorship chaos happens people try to manipulate the ratings board, or worse, when shrill crusaders actually become members of those boards.

Good, they just need to get a bill passed to put these recommendations into law, I guess it will take a while because of Brexit though:(

Today i had my 72 year old Grandma ask me what the news was on about “saying computer game lot boxes are a gambling scam” so its finally breaking the mainstream. We all know from shit like the famous “Left 4 Dead 2 Boycott groups” and the like that gamers love to bitch and moan but so many on the downlow do exactly what they say they hate “because i’m only dropping £200 on overwatch cosmetic textures already on the disc, i’m just one person!” says a few thousand people as they chase the dragon for that perfectly designed to generate a dopamine rush focus tested box opening animations for that flash of yellow -which of course 1 frame of every box has just for a little spurt and a feeling that you got real close that time- and its not going to change.

But now the mainstream and parents are being made aware. Thats a different kettle of fish entirely. Parents aren’t getting the jitters because their habit forming scam is going away and they can’t make youtube montages of “MOST EPIC PACK OPENING EVER?!?” and instead are just going “MY KIDS USING MY CREDIT CARD FOR WHAT?!?” and of course its also up to parents to police this shit, but its becoming increasingly apparent that games publishers and the journos in their pocket with the ransom of review copies and paid flights to shows have done their damnedest to make sure joe bloggs and the missus have no idea that this shit exists and has been designed to predate on their children.

It all reminds me of something i read like 4 years ago about King, now Activision-King i guess, designing malicious scams and saying its okay “because only .15% of users are the ultra heavy whale” and take a guess what percentage of the population has a predisposition for gambling addiction?

No doubt every site talking about it will be flooded with comments from people talking about Kinder Eggs and Tading Card packs but the fact they are getting so worried about their fix going away they are going to bat for the bloated corporation, you know, the little guy, that maybe that says something about their own “i-its not designed to form a habit! its surprise funpay micropartys!” bunkum.

Clearly, and completely cynically, EA et al. have not yet figured out the correct amount of bribe required to keep European lawmakers in line.

There are some groups/types of people you’re never going to be able to bribe. Like someone who makes their public image based on the idea that they’re “for the common man” is going to be hard pressed if it ever came out they took money from big business. The key is to bribe enough of the others so that significant progress can’t ever get made. You don’t have to stop people from trying, you just have to stop them from succeeding. Then it’s simply a cost benefit analysis if the income you’ll lose from loot boxes in a country exceeds the cost of lobbying. In a country like Belgium, it’s unlikely it would. Something like the UK or US it might be worth it.

I am mechanically surprised Parliament has managed to do anything recently.

The Daily Grind: Do you have a favorite MMO PvP moment?

Massively Uplifting: Speech therapy, a college class in WoW, and the...

The Repopulation promises new skills, system revamps, and more in its...