E3 is looking to be a completely different show in 2020 if the plan slides distributed today mean anything. Pitch slides and details shared by GameDaily.biz have organizers looking to make E3 2020 a “fan, media, and influencer festival,” along with plans to further police its coverage with major media partnerships.

The ESA proposes leaning towards deals with influencers and celebrities from talent agencies like UTA and CAA. Examples of events given are having members of the LA Lakers playing a basketball video game or actors competing in a tournament. It also has been confirmed that an additional 10,000 consumer badges have been made for E3 2020, bringing the formerly industry-geared event closer to a consumer event with 25,000 consumer badges in total. There are plans to have an industry-only day on Tuesday. 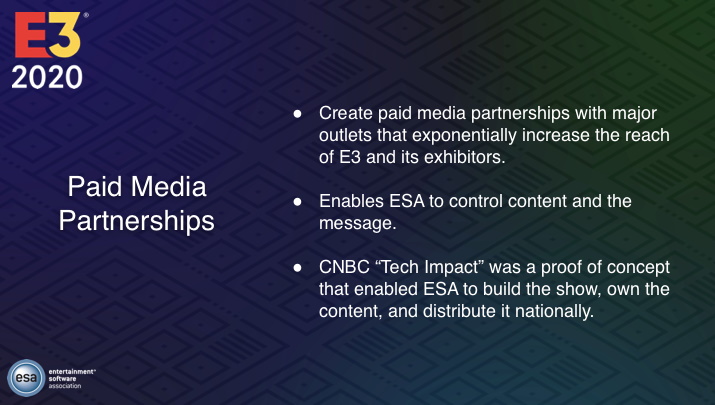 What’s most alarming, though, is the above slide from the proposal that talks up paid media partnerships. The slide reasons that these partnerships will help the ESA “control content and the message” as it seeks major media outlets that “exponentially increase the reach of E3 and its exhibitors.” The slide also points out broadcasts from the show Tech Impact as a “proof of concept that enabled ESA to build the show, own the content, and distribute it nationally.” The episodes in question, which can all be viewed online, do not have any disclosure or legal copy mentioning paid promotion from the ESA.

These revelations will likely add to the growing pile of concerns about the trade show. A list full of personal details for over 2,000 attendees was pulled from the ESA website this year along with similar security breaches in 2004 and 2006, while the show’s attendance has been in a steady decline when compared with other video game conventions.

Talk about stoking the flames of a dumpster fire.

E3 peaked for me in 2009, that was the last time i really took it seriously or got excited over it

So basically making it not about what it’s about even more. You know, since it’s about the games/technology. Not what you want to say about the games, or talk up about something, or use scantilly clad etc to intrigue people with.

I sometimes watch on stream nowadays, but this last one there was barely anything I was even interested in.

A ton of ‘retro’ style games being made. Barf.

If you are trying to make yourselves irrelevant, it’s working…

Like every trade show ever, it’s wandering mostly-aimlessly for miles, being deafened by titantic advertisements populated by improbably-breasted usually-humans in order to (once in a while) stand in interminable lines to *maybe* get a chance to sit in a cloud of the previous 18 underbathed gamers’ nerd-sweat miasmas to play some semi-functional alpha version of a game that’s not coming out for at least 3 years OR you can speak to the interchangeable marketing flack wearing the finest merch from their company belch forth the rote statistics they feel are most compelling to “the average gamer”. But wait, you DO get to carry around a bag of promotional and other crap that either a) you got for free and it wasn’t even worth that, or b) is some collectible thing you paid way, way more than you objectively should have and you spend the rest of the show desperately attentive to the safety of said trinkets.

I was very fortunate in that I was there for professional reasons, and so got to interview some really fantastic, generous, interesting luminaries of the industry like Jack Emmert, Bruce Shelley, etc some interviews I’ll never forget. One of the most interesting spontaneous conversations I had was with a young woman who was a professional “booth babe” – her term, not mine (but TBH it would have been mine, too). I was in the VIP upstairs lounge of one of the big dev houses eating some of the free food, and she’d sat down at the table with me to eat her (obligatory) minimalist salad. I was going to leave her alone to her deserved privacy, but she asked who I was (must have seen my badge). Ended up writing what I thought was an interesting, differently-angled piece on how they viewed the show, the attendees, and the industry. Nobody was interested in publishing it tho. (Shrug)

So I had “access” making it worth doing but to just go as one of the vast unwashed (literally) hoi-polloi? Pass.

Meanwhile the ESA is also disagreeing with the UK’s attempts to regulate lootboxes.

Never watched. Never will. I care about playing games, not being spoonfed hype about them.

I’ll worry about playing them.

The hype can be fun. Sometimes more fun than the games themselves end up being, sadly, lol. But I enjoy that experience of collective excitement and the speculative discussions.

i’ll do what i do every year and follow massively’s stuff and the giantbomb nightly show that has the best talk show interviews in gaming.

E3… attempting to become completely irrelevant as quickly as possible.

Meh, the paid media stuff is kinda “whatever” to me. It takes two to tango with that, and media would have to accept their payments to give up their editorial freedom.

But as to the other changes…fucking gross. Not looking forward to this. It seems like they’re trying to turn it into a more gamescom-esque affair, and given the shitshow that the show has already been logistically for years (not even touching on their terrible data security) I have lower than zero faith in their ability to do so.

I imagine most of the collective media/industry folks are looking upon this news as a whole and recoiling with horror. We already have enough shows mobbed by “influencers”, that’s what the PAX’s and the likes are for. E3 was a different type of crazy, but this is just adding more chaos and insanity on top of it.

If their poor data security didn’t put another large nail all the way in the coffin for the show, this news is driving that in with a damned sledgehammer.

Mad props to Futter for this break. He’s fuckin awesome.

Fantastic decision! I can’t wait to skip being there again!!!!

TitanReach turns off its servers to enter a multi-month ‘private development’...

Overwatch shares reworkings of Bastion and Sombra coming to Overwatch 2