Now that you know there is a host of lore to find in Warframe, you are probably more eager to gather it all. And maybe you’ve dived into some of the comics or started reading the Codex to learn more about Ember, Excalibur, Mag Prime, and Rhino Prime. (Read up on those frames includes spoilers if you haven’t finished The Second Dream!) But the bulk of the lore knowledge comes through scanning: scanning enemies, objects, and fragments. You can come across enemies easily enough — that’s what missions are all about! The fragments, however, are another story; there are so many types scattered all about that we couldn’t possibly cover all that in the last guide! So as promised, today we’ll focus on the fragments.

END_OF_DOCUMENT_TOKEN_TO_BE_REPLACED
In this guide I’ll delve more in-depth on what fragments are available and what type of lore they unlock. While I won’t be sharing the exact locations of fragments (they spawn in missions as you play), those who desperately want to read the lore without waiting or see complete lists can head to the Warframe Wiki to check it out. I will, however, give an extra bonus for those hoping to complete the 14 verse Kuria poem: One Warframe player compiled The Hitchhiker’s Guide to The Kuria. With a title like that, how could I not share it?

Before delving into the fragments themselves, I simply must point out that missions must be completed for scans to be counted as successful. One exception to this is that when a junction requires a scan of Cephalon fragments, that task will be counted as completed whether or not you fail or succeed at the mission you are on.

Besides using the Helios sentinel to automatically scan items within range (make sure you stock up on scanners!), you can also use loot radar mods to make Cephalon Fragments, Somachord Tunes, and Frame Fighter Fragments appear on the minimap.

Don’t forget to find those hidden audio files once you fully unlock an item! Do this by rolling your mouse across the image in the Codex until the audio file starts playing.

Found in random locations in most missions types across the system (the exceptions being except defense, interception, and archwing missions), these fragments require multiple scans before the corresponding Codex image can be unlocked. That doesn’t mean scanning one fragment multiple times; you have to find multiple fragments and scan each one once. These fragments will offer general background information about the planets and the setting. Once you unlock the audio files from a completed unlock, you’ll hear Cephalon Ordis narrating his tragic origin story as well as reveal the secret of how Cephalons are created. There are 43 types of Cephelon fragments, ranging from planets to races to environments.

The Cetus Fragments are also known as the Thousand-Year Fish Fragments. That’s because these are unlocked by scanning small glass fish statues hidden throughout the Plains of Eidolon! Once you complete scans of the entire collection, you get one of the statues as a decoration to place in your Orbiter. These fragments provide general information lore concerning Cetus and the Ostrons. When you listen to the story by mousing over the unlocked image, Quill Onkko’s voice shares the origin of Cetus, why the Ostrons settled there, and how the tower of the Unum protects them.

A very specific set of fragments, the Gara ones (aka glass shard fragments) give the backstory of the Gara warframe. Players don’t need to worry about missing out on these five because they are unlocked during the Saya’s Vigil quest. The completed image mouseover story is narrated by Quill Onkko and provides more of Gara’s backstory.

Called the Ghoul fragments for short, the Encrypted Journal fragments can be gathered only during the Ghoul Purge event. This event transpires every month or two on the Plains of Eidolon. The fragments can be obtained either as drops from killing Ghoul enemies or as rewards from Ghoul Purge bounties. The story unlocked by the mouseover is narrated by a Corpus researcher named Sigor Savah. Oddly enough, this lore is not about the ghouls at all but instead about the history of the Khora ‘frame.

Like the Gara Legend fragments, the Nakka Memory (or Revenant Legend) fragments are obtained during a quest: the Mask of the Lost One. This is the quest where you get the Revenant ‘frame, so it makes sense that the mouseover story here, narrated by Nakak, shares more about that ‘frame’s backstory. (One quirk to note is that on the terminal, these three fragments are listed under the “Cephalon” category.)

With the introduction of the Fortuna expansion, players got an increase in fragments to find. These Fortuna Fragments are unlocked by scanning small data logs hidden in fixed locations (usually resembling journals) throughout the Orb Vallis. Unlike the other fragment collections, this one does not include a special audio log hidden within an image after unlocking them all. Instead, each audio file is just the caption text below each image but narrated by the relevant Fortuna NPC. If you’ve met these NPCs, you know it is worth listening to these personalities!

Partnership, or Corpus Glass City fragments, are found by scanning Sentient figurines inside transparent cases hidden throughout the new Corpus Gas City. The locations of these canisters are fixed instead of random, but some can be hard to reach without using a warframe with good aerial mobility (looking at you, Titania). The lore these provide is a bunch of background and more context as to what’s going on with the Jupiter rework, the new Amalgam enemies, and the Ropalolyst boss fight. Warning: This information contains spoilers for players who’ve not yet played the Sacrifice and Chimera quests. There’s also no mouseover story for these; like the Fortuna fragments, these audio files are just the caption text below each image, here narrated by Alad V. 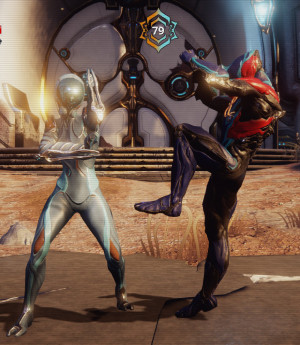 Not all fragments you find throughout the solar system in Warframe offer lore — some give goodies! I am all for some cool stuff, so these are equally worth finding.

The Somachord fragments are four pieces that when found and combined grant playable background music for your orbiter. Those who have completed The War Within quest can start finding these anywhere in the solar system; those who haven’t yet can’t even see any.

Frame Fighter fragments (which are spread throughout the solar system for anyone to discover) will unlock new ‘frames for players to use in the Frame Fighter mini-game. Unlike other fragments, however, each of these will grant a new frame; there is no need to collect a certain number before getting your goody.

Not So Massively: Age of Empires IV is a thoughtful love...