Let’s take a quick break for what’s fast becoming MMO Anniversary Week around here for a peek at a brand-new MMO still on the horizon: It’s called Antares Open World, and it’s new to our pages, having just been profiled by Improbable as one of many games being built with SpatialOS. Here’s the pitch:

“Antares Open World (AOW) is a hybrid open-world MMO RPG agent simulation, based on a 4X strategy and survival player-driven sandbox concept. It follows the natives of Antaria, a civilization driven by conspiracy theories, hard facts and ideologies, in a world seemingly swayed by myths and legends. In Antares Open World, reality and perception will become blurred. Trade wisely, because nothing is how it seems. Get to the bottom of mysteries. Question postulated facts. Trust no one. Antares Open World will take you into an ancient world where you have to draw your own conclusions, decipher messages, and rewrite Antarian world history.”

Developer Jan Ohlmann warns that it isn’t going to be a casual-friendly title – that the “goal is for it to become one of the most complex MMOs of tomorrow,” and by that he’s referring to what sounds like a true virtual world simulation with a focus on meaningful decisions in a detailed ecosystem. The downside is it’s a long way from completion and still in search of more devs, with a Kickstarter coming “in the next few years.” 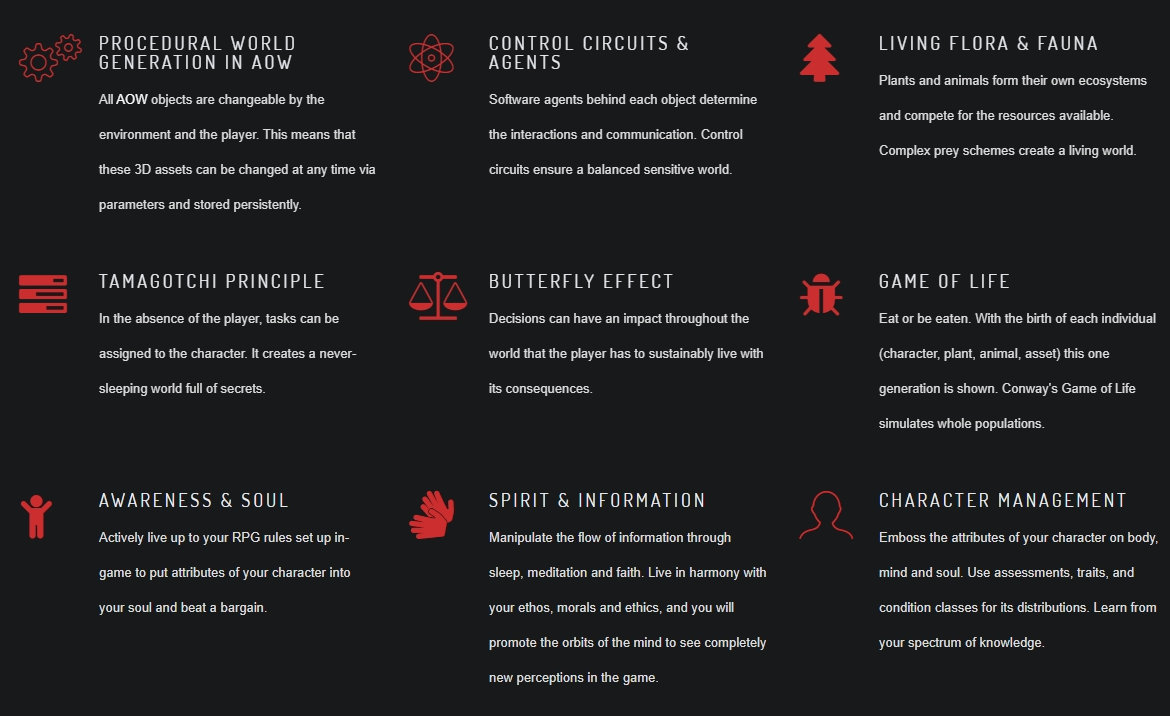 And then, after aeons of development, Antarian civilization will become legendary… And will emerge in Master of Orion.

Spare me. While I’d love to see them succeed in reality most developers planning something like this had no idea how to build system that complex. Last try that comes to mind was Revival.

There’s some big red flags here, as much as I enjoy the idea of actual virtual worlds. There’s also a few problems that need to be addressed in development of such titles, not the least of which are trolls and player habits (AKA the UO issue).

I still think UO had a great chance to set the gaming world on a very different path by sticking to their guns, letting the players suffer the consequences of overkill, and even making predator attack events as a result of the culling of too much prey… the choice to not do so led us to the mostly static MMOs that are, and they are, frankly, rather boring all in all if you aren’t interested in the combat aspects for months on end.

Eugh, getting awful Hero Engine flashbacks every time I read about SpatialOS. All the great new games being built on it, going to revolutionise the MMO scene etc. etc.

I’d be happy to be proven wrong, but I see disasters looming.

Love the sound of it cant wait for more information.

So they’re trying the ecosystem thing that Ultima Online tried so long ago.

Maybe they’ve got a better way of doing it I guess. From what I read, it didn’t work in UO because there were too many players killing everything that moved. I guess if the land were bigger with less players swarming it, it could still work. Or if it just basically made certain things spawn more or less.

They’re talking about “complex systems” that make plants and animals compete for resources, but I thought the complexity was what hasn’t really worked in the past.

I guess there isn’t really any reason why it couldn’t work if done right. You can’t (or shouldn’t) actually let things become extinct though, so it can’t be that complex (if someone did, that would be a horrible move and waste of resources, unless they were going to do a slight re-design on the creature and put them back into the game again as a more hardy version of them or something). We’ll see in time.

There are a lot of big ideas for not having more than a single person working on it at the moment. Maybe he really will be the first one to do that ecosystem thing with complexity and have it still work.

This seems vastly too ambitious, to be honest; audacious, admirable goal to create a game of that scope, but also beyond reach – the complexity would have to be scaled down (in my opinion) and they would still have to have a big budget and large staff to deliver this, whatever the intended launch year.

I stopped reading there. Those two things are almost mutually not exclusive. Facts bounce off conspiracy theorists, because they don’t trust the facts, and would rather believe in ‘alternative facts’ (Read : Non-facts.)

I would never play something that caters to the crowd this is catering to. We already have enough of a problem with people like this in the US shooting people to death. Why someone thought it was a good idea to give them just one more platform to air this stuff, I don’t get. I expect it will make a poor showing, but the way these types are proliferating in this day and age, it wouldn’t surprise me if it found a huge following…

Bugged me too. This is the game of “The world is flat, even though all our evidence keeps saying it is round. Something is obviously wrong with these tools, or maybe something is purposefully interfering.”

Just looking at the site, it almost sounds like they’re trying to build an engine more than a game, based on google’s very rough translation.

Weird that they’re looking to hire people with UE4 experience, since that video is from the Unity Engine. And not to trash talk them, because I think complex AI driven ecosystems are the next big thing for MMOs and I’m glad to see people pursuing it, but the progress in the video looks like what someone can slap together in Unity over an afternoon. So I’m very wary of this project. It seems impossibly ambitious for a company that doesn’t have an incredible amount of money behind it.

I’m all for new indie MMO titles coming out since they seem to have SOME sort of innovation or hybridization of features from a bunch of other games/genres that just work well on paper. Proof on concept. STOP trying to sell us on a vision, Triple A companies are doing that now and it allows them to prey on a majority of folks wanting to experience the game that was written on the page, and then the implementation comes and it falls far, far short of what we expect and want. Proof of concept. Show it off in a playable, albeit condensed/concise way, and allow us to play it maybe in demo/trial form or something like that. Tons of communication, tons of gameplay showcase streams/vids, more of what we want to see to know our investments are down the toilet. This game could be cool and I’m looking forward to seeing what SpatialOS can bring to the MMO table.

What you fail to realize is that hope is a fragile flower that only grows in the dim light of uncertainty.

I feel like I’ve heard some of this sales pitch. Wildstar comes to mind regarding the ‘hardcore’ nature.