As December continues to draw to a close, the developers of Fallout 76 are looking back at the past year’s efforts in the most recent dev blog. As one would expect, the post lauds the wide variety of updates made to the multiplayer title, not the least of which being the big Wastelanders update, the arrival of a public test server, and the One Wasteland update. It also has an infographic with a variety of stats like the most nuked location, the most popular Asylum nurse color, and the amount of Wendigo teeth harvested, and spotlights several community creations.

The post closes out with a nod to the recently released update, which has added the third season’s Scribe of Avalon scoreboard. It also offers up a small calendar of events for the first three months of 2021, with dates for several in-game events and upcoming updates like Pip-Boy menu changes in January and a loadout feature for SPECIAL in March. You can check out that calendar below for more specifics; click on the image to expand it. 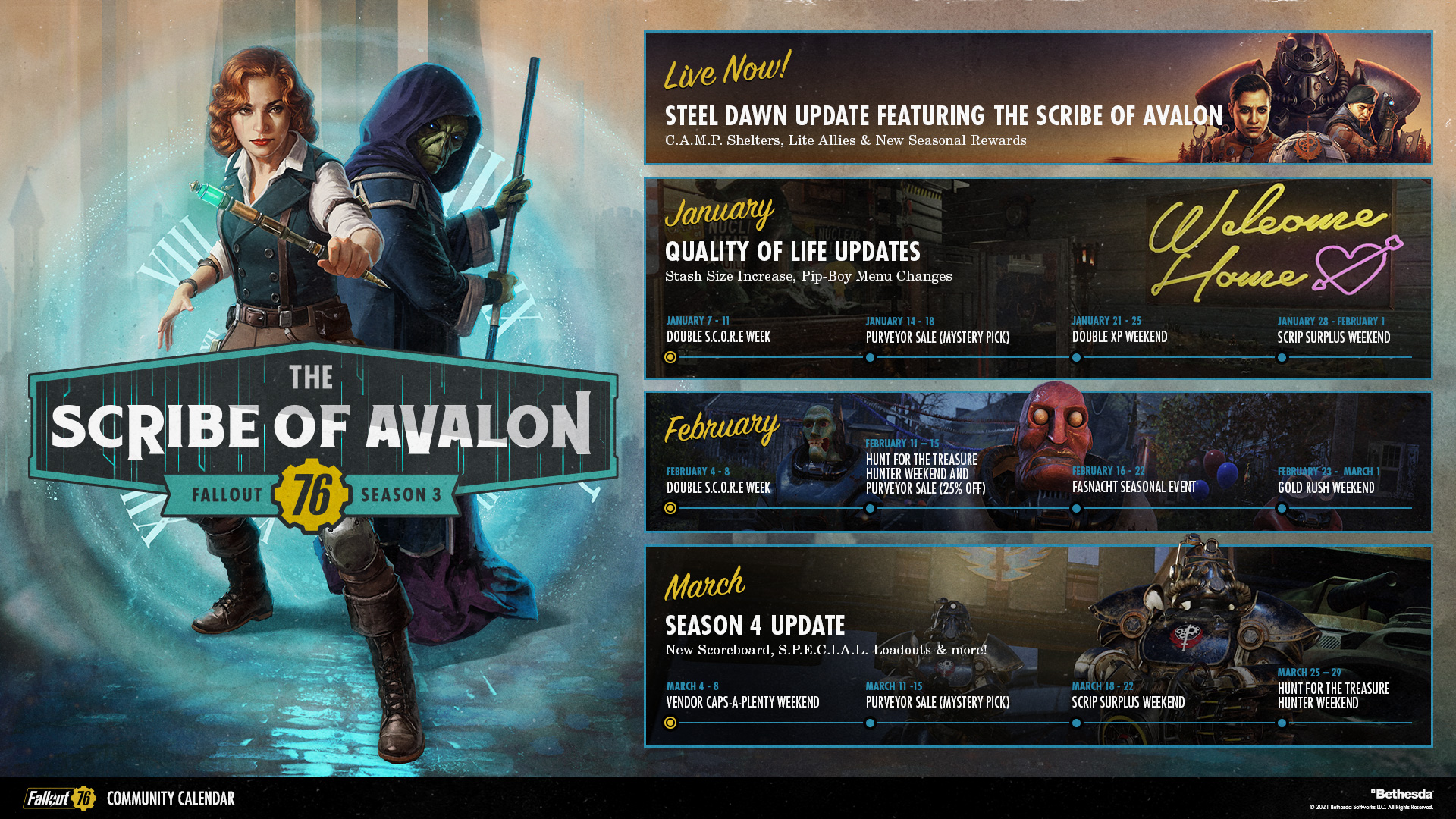 Bethesda executives in their office this week are doing the “At least 76 wasnt as buggy and unfinished as Cyberpunk” dance.

They’d be deluding themselves in that dance.. I love both games, but FO76 has taken a while to get to a point of being a whole game.

Can’t wait for the stash increase, apparently my junk hoarding and gear dismantling tendencies is the source of my biggest problem. Spent a solid 20 minutes freeing up a few hundred pounds in my darned stash finally.

And I’m actually considering Fallout 1st, at least for a bit, so that I can just dump ALL THE JUNK into my scrapbox and save up massive loads of the stuff so I’ve got a nice supply when it ends. The cash shop currency helps too, but I honestly haven’t seen much that I think I’d actually want outta there.

For me its worth it for the infinite junk stash alone but the other benefits (extra free fast travel point from the tent, private server for when I want to spend an evening sitting on workshops to restock fusion cores and for such things its a pretty decent amount of currency per month) make it a no brainer. Of course even with infinite junk space I’m always out of space for other stuff lol

I’d say 1st is worth it for at least one month. You get a bunch of permanent goodies to keep and then some not-permanent stuff that can at least let you move all your current junk into the scrapbox. The TENT you get to deploy anywhere (that it can be placed) for free is incredibly useful as well when you’re out and about and need to dump junk into the scrapbox or stash, as well as cook up any meat you get. Also has a banjo chair + sleeping bag for those respective buffs.

That and the Atoms you get out of it is like $15 worth, so similar to ESO Plus that alone can pay for itself if you have any interest in the Atom Shop offerings.

And of course the benefits of a private server are pretty numerous, in particular though is the ability to freely farm pre-placed items like Military Ammo Bags/Military Grade Ducttape which is used for Ballistic Fiber, and that’s a pretty hot commodity once you get level 40+ gear or so.

still going huh? You woulda thought they would just cut their losses and make fallout 77 instead.

6,591 spoiled meat dropped by one player. What? That has to be cumulative for the year right?

They are from a Duper/Hacker, the game is absolutely riddled with them since the game is a singleplayer engine designed to be modded with netcode stapled on.

For most of the beta events player animation speed was directly tied to framerate, so unlocking that gave you super speed, and doing anything that would cause hick-ups for others would make pvp even more lopsided (back when the game couldn’t figure out if it wanted to be a gankbox or not).
They do what they can to combat duping, but they would need an engine rewrite to stand even the tiniest of a chance.