Here’s something that might bake your noodle: A new study suggests that children playing violent video games cooperatively such as Fortnite are actually more willing to engage in prosocial behavior.

The paper, titled The Fortnite social paradox: The effects of violent-cooperative multi-player video games on children’s basic psychological needs and prosocial behavior by Anat Shoshani and Maya Krauskopf, pulled together a sample of 845 nine- to 12-year-olds, had them play games that were either violent (Fortnite) or neutral (Pinball FX2) and single-player or co-op, measured the players’ perception of the level of violence, and then afterward had them engage in two types of prosocial tasks where they could provide assistance to the experimenter and donate raffle money to charity.

According to the researchers, participants in violent cooperative games were more engaged in the prosocial behaviors than not, regardless of the actual game’s violent content: 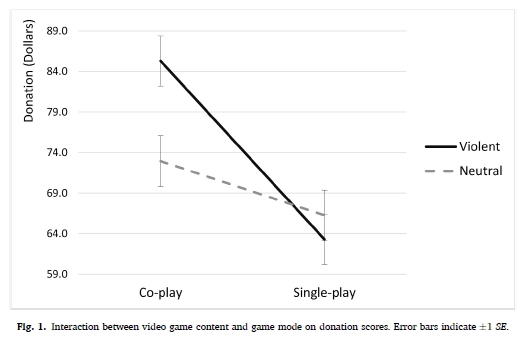 The paper is paywalled and set for publication in the journal Computers in Human Behavior later this spring; the preprint we viewed aims to “[contribute] to the growing number of studies that challenge the common assumption that violent video games lead directly to a decrease in prosocial behavior” with results that “emphasize the importance of the context of the game, not just the content, when examining the effects of video games on social behavior.” The authors also note that they hope future studies will have a more even balance of gender (more boys than girls participated in the survey) and a broader range of games (though they note the prosocial effect was stronger for people playing violent content in Fortnite than neutral content in Fortnite).