I’ve mentioned a lot of times, in passing, how my wife and I connected in part through World of Warcraft. But I’ve never actually gone into any depth on the subject, and it didn’t actually happen because I wanted to be involved with her.

It happened because I needed a healer.

At the time, I had a collection of friends in the game who were all happy to play with me, but we also were all DPS. In the days before the dungeon finder, this meant that forming a party was more or less just something that was not going to happen. So I recruited my best friend at the time with the explicit statement that I wanted her to be our healer.

We’re now many years on from that, and pretty much 90% of the time she plays a tank. So from one perspective, that plan was an enormous failure. 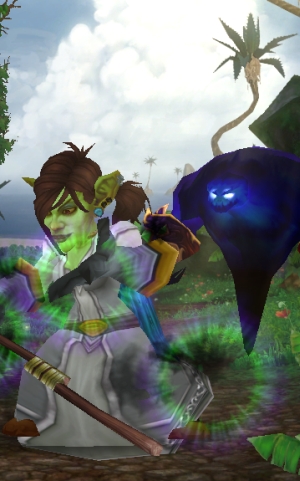 My wife and I had known each other through all of college and we had always been close, to the point that I was informed (after the fact) that basically everyone who knew us was just waiting for us to hook up. That didn’t actually happen in college, though; while there was flirting, we were both in committed relationships. And when the time came that we almost hooked up, we… well, fell out of touch for a while.

But we were talking again, and I was hanging out with her when I mentioned that I needed a healer in WoW. “You would like it,” I said.

“I don’t have a whole lot of time,” she protested. “I have grad school that I’m aiming for, and then there’s work, and I know how those games can suck you in. And that roleplaying stuff you like is dumb; I’m not interested.”

At no point did I actually see her put her shoes on; I saw a blur and then she was there with her keys and purse. “Come on,” she growled, “let’s go, I want to play.”

We took a trip down to the nearest Walmart and picked up a copy. This was in the days before any expansions, so it was just the one thing and a quick-ish spot of installation. I explained the various healing options available to her, wondering what she would play but kind of expecting an Orc Shaman or Undead Priest. (I was Horde at the time.) So she surprised the heck out of me by immediately going Tauren Druid and never looking back.

The next day, she called me up while I was at work. “I am a bear,” she helpfully exclaimed, prompting the nickname she has had in our household for the following decade-and-change.

I didn’t explain to her that bear-form druids were, at the time, suitable only for confusing low-level bears into thinking that you were one of them. I may have only been peripherally aware of that myself, really. What followed was a nightly session of what we dubbed the Mulgore Power Hour, despite the fact that by the time we started playing together on a regular basis her druid was long since out of Mulgore.

At first, it was a matter of just playing on my Warrior and helping her out with lower-level quests. Then it was a matter of guiding her through dungeons. Then I was catching her up and farming things with her. Then she was making alts, and she was starting to see the appeal in roleplaying, something I had never expected or planned for.

I remember distinctly one night that we were farming in Un’goro Crater, chatting away while ambling along on normal-speed mounts. We were making plans to move in together, albeit strictly as roommates; it’s important to remember at this point that we had been friends for years at that point. It was a means of saving money and being sensible, and half of the time we shared the same living space anyway.

“I’m scared about us moving in,” she said.

“Yeah, I get that.” I was too, really; it was a big shakeup to our existing dynamic.

She wasn’t actually finished, though. “I want to be your friend and your roommate,” she continued. “But I’m falling in love with you a little more every day.”

I don’t remember what I said at that point. We might have turned it into a joke. It’s definitely possible.

By the time we did move in together, we were broke. But we could still manage to keep a monthly subscription going, and so our nights mostly became sessions of her on her laptop and me on my desktop playing WoW in the same room, joking around as we plowed through enemies and leveled, dipping our toes into roleplaying together.

When The Burning Crusade came out, we were pretty decidedly an item. I remember both of us scheduling work around making sure that we could attend the midnight release, standing in the cold weather outside, ready to get home and make our characters. We drove home talking in excitement about what came next, installed with nearly breathless anticipation. We played our two planned mains for the expansion, a Draenei Paladin and Shaman, until we finally passed out around two in the morning.

Those characters wouldn’t even make it to the next expansion, as it turned out. But the goal was still there. 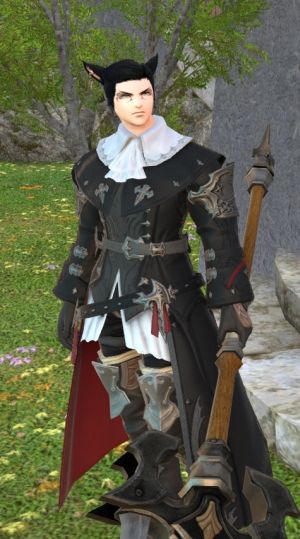 The thing was that even when we moved on from World of Warcraft, we didn’t move on from staying together. As she wanted to explore other games, I went with her. She wanted to try Final Fantasy XI and City of Heroes because I had played them. She wanted to play Final Fantasy XIV with me at the initial launch so she could enjoy it right alongside me (that didn’t wind up happening with the initial launch, but it did happen with the relaunch). We’ve kept playing together, for more than a decade of being together, through all of our years of marriage.

On our wedding invitations, she drew pictures of our major RP characters to line the invitation. It was really cute.

I didn’t form the relationship with her through MMOs; we had been friends for years beforehand. But MMOs gave us a way of exploring that relationship from a different perspective, having a shared goal and play experience we could both enjoy equally. It meant that instead of just playing games separately and metaphorically comparing notes, we could both exist in this same game world together. We could help each other, team up, have separate experiences, come back together. We could roleplay characters as allies, lovers, enemies, family, and strangers, all while coming back to rest upon the foundation of friendship and communication. It was something to reinforce our relationship.

And it’s been a grand journey. Nor is it one that’s ending. I’m writing this right now as we’re getting ready for a trip, but before we go we’re trying to make sure to run some dungeon roulettes in FFXIV for fun. It’s one of the things we do, a shared hobby we can both enjoy.

And yes, I still tell her that she’s a bear.