What’s that sound I hear? Or is it just a feeling? It might not be a super power, but something in the back of my mind is calling for my attention. It’s much like the old adage “every time a bell rings, an angel gets its wings.” Every time a multiplayer PvP game goes free-to-play, I must log in right away.

That’s exactly what happened this past week when I learned that Galahad 3093 dropped the upfront box price to encourage players to give it a shot and play. It’s a team-based, FPS arena shooter where players ride giant mechs into battle. Why does that feel so familiar? Oh yes, I did recently take a deeper look at Gundam Evolution – another team-based, FPS arena shooter.

However, here we swap out the Gundam theme and replace it with… King Arthur and the knights of the round… in the future. Of course I’m being factitious and there are many more differences. Besides, why not play as King Arthur in a mech, right? The graphics look cool. Mechs are cool. PvP arena games are cool. So let’s check it out and find out if this game is, in fact, hot stuff.

Combat is fast-paced without headshot deaths

It might seem obvious that a game focused on mech combat wouldn’t include headshot kills, but what I mean is that you don’t drop dead instantly or near instantly when you initiate combat.

That was always my greatest grievance in Valorant. And I do get it: You get shot in the head, then you’re dead; it makes logical sense, and there’s a great sense of achievement when you get a headshot kill. Moreover, watching playback or matches where someone is able to take out a team with a few well timed pops can be exciting. More power to you and your games, all you CS:GO and Valorant players, but it’s just not for me. I say one of the worst feelings a newcomer (or even a veteran who’s still hate-playing) can experience is combat where it feels like you have no chance to even learn the game because you’re already dead. 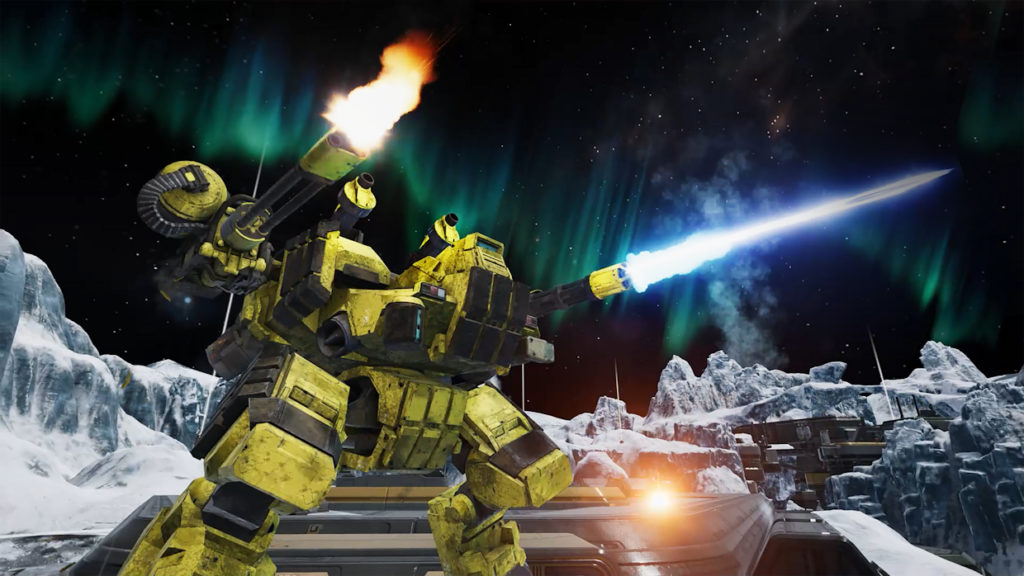 So in that way, combat in Galahad 3093 is quite like that of Gundam Evolution. I mentioned it jokingly before, but the games do actually have a bit more in common other than being focused on FPS mechs. In both, players have an armor bar and a health bar. From what I’ve seen, armor always depletes before health, but perhaps there are weapons that can damage players by ignoring armor. Your mech, called Lances here, operate at full capacity until defeated, meaning that you don’t take arm damage and lose your arm, leg damage to lose a leg, or the like. Your Lance is a complete machine or a busted one.

At a high level, you could really see these games as interchangeable. But if you dig into the combat a bit beyond “point-and-click to make baddie go boom,” you’ll see that Galahad 3093 has much more depth than Gundam Evolution. And to do that, the game opens up player creativity and builds rather than expanding the number of selectable heroes.

Your Lance will have four standard weapons, a turret/drone to deploy, a profession-based ultimate ability, energy for dashing, and a separate energy meter for super jumps. You will also frequently be zooming in and out while firing off all these abilities, which can get pretty hectic. The dash ability sort of skids you across the ground quickly, so it isn’t so much a dodge as a sprint ability.

Weapons damage comes in a few different flavors, but in general the two main types are energy and kinetic. I believe the game refers to bullet weapons as kinetic, but I’m sure we all recall from high school physics that kinetic is actually just a term for movement energy. And I guess bullets do have kinetic energy. So I’ll opine that the name isn’t completely wrong, but it’s also decidedly not different from just energy. Maybe we can have energy weapons and mechanical weapons. Or energy damage and physical damage. Let’s shop this one for now. Where were we again? That’s right, giant robots fighting in the future.

Each of the two types of damaging weapons have bonuses depending on what you’re attacking. Energy works best to deplete armor, while kinetic is best for physical damage to finish off the Lance. It makes for a nice area of coordination for teams; some of your members can focus on the energy damage to knock down the armor, and your kinetic warriors can move in to finish them off afterwards.

The level of customization for your Lance is fantastic

I ran through the tutorial first, which I thought was quite adequate and even helpful for getting a feel for the controls. However, when I left and went to the armory to see what customization options we had available, I have to admit to being a bit overwhelmed. Galahad 3093 did attempt to make it less so by including some pop-ups to guide you through the armory, but there was just much more than I was expecting.

At the highest level you have the type of Lance itself; there are four based on weight from light to super heavy. Then there’s your pilot, and this is where the game gets its Arthurian theme with pilots such as Morgan (Morgana) and Gwen (Guinevere). Each one has a unique active and passive ability, the active one being your Lance’s ultimate move during combat.

Next you’re able to customize each of your weapons – that is, each of the four guns (left and right arms and each shoulder) as well as your turret or drone. After that, you can choose your variant, which appears to be largely a leveling system that unlocks by achieving certain conditions. Finally, there are mods, which are basically various passive bonuses like increased movement speed, greater radar range, and damage reductions.

There are just so many ways you’re able to customize your mech to fit your playstyle, which I really love. Maybe you want to have a sniper gun on one arm and a shield breaker on the other. Maybe you like having your own shield. It’s totally within your control, and that is fantastic.

Now, as a newbie, I know it would’ve taken me forever to wrap my head around all this, but the developers at Simutronics actually included several pre-made builds for everyone to use. They are named in a really easy, straight-forward way too. You want to play like a tank, pick tank. Do you want to play a sniper or a support role? Then choose those. If you like most of the build but want to customize just one weapon or mod, then you can just do that. You don’t have to start from scratch. It’s so easy that I wish every game did it. It lets you feel like you are your own character rather than like you’re playing the same hero as every other player. And if you like to experiment, you have four quick-swap build templates to use.

That really is a lot for customizing your loadout, but there’s also emotes and your mech’s paintjob. There’s a palette of colors to pick from and even a few different skins to put on as well, with more to purchase, but even the free base ones look solid. Check out those flames! It’s like my Lance is tearing around the armory. But it’s standing still. Still waters run deep.

You may not have heard much about this little indie title, but there’s a lot to like about Galahad 3093. If you want to jump into some mech battles but think Gundam Evolution is a bit too anime for you, then you could do a lot worse than play Galahad 3093. It’s fun, free, and available right now.