The other day a friend was telling me that he used to play EverQuest Online Adventures very regularly back in the day, but fell away from MMORPGs following that. “I’d like to get back into them,” he said, “but I don’t have a gaming computer. That’s too bad.”

That doesn’t matter, I replied. I went on to inform him that out of all of the genres of games these days, MMOs may be the most forgiving for low system specs. That’s partially because these games were designed to run on as many types of computers as possible, and it’s also partially because many of the MMOs we have these days were released five, 10, or 15 years ago.

So while even your potato could run most MMOs, let’s run a fun thought experiment in which a friend asks for recommendations for an actually good online game that would be very forgiving to an older machine. Pushing aside the pile of browser-based games and smaller titles that probably aren’t worth your time, here are the first 10 MMOs that come to mind.

One of the biggest reasons for RuneScape’s success was that it saw a need for an MMORPG that would run on, well, anything at all and filled that role admirably. Kids in the early 2000s who lacked a rig that could play a high-end MMO (or a subscription that could fund it) gravitated toward this browser-based title. And even today, both versions of RuneScape are still perfect for computers of all types. The general rule of thumb here is that if they’ve managed to get this game running on a tablet, then your eight-year-old Dell is probably more than enough to handle it.

Trove’s light footprint is one of its more underrated qualities. I always loved being able to boot up and get into this world very quickly, and Trove never seemed to take up much of my system’s resources at all. I guess that’s what you get when everything on screen is a jumble of blocks instead of complex polygons!

Just because City of Heroes recently came back thanks to the emulator scene doesn’t mean that it’s a modern game with modern system requirements. This is a title that originally launched in 2004, after all, so it won’t be taxing your computer. There are also plenty of graphical sliders to adjust downward if your TRS-80 can’t handle all of the particle effects and pasted-on faces.

When evaluating MMOs for low-end computers, it helps if you gravitate toward games that are heavily instanced, as that’s much easier for home systems to handle. The original Guild Wars is nothing but instances while still giving you that MMO feel and those social connections you crave. It doesn’t hurt that this is a pretty awesome game that everyone should go through at least once!

As an aside, many players have testified that Guild Wars 2 is also very friendly to low spec machines, so don’t let that stop you from giving it a try.

Yeah, you didn’t really think about this one when you started this list, did you? But DDO is absolutely perfect for older machines with its lower graphical fidelity (that still manages to be attractive in its own way) and heavy use of instancing. Plus, it’s a great game with fun group dynamics, challenging puzzle solving, and robust character building. More people need to be playing it, is all I’m saying.

Nobody is going to accuse Wizard101 of boasting the most polygons and particle effects in the world, and that’s great news for older systems that don’t need to be taxed. Yet this Harry Potter-esque game augments the simpler graphics with bright colors, a whimsical style, and over-the-top animations. Plus, it’s great fun for the whole family!

Speaking of older graphics, EverQuest does look somewhat better than its 1999 incarnation, but it’s still not going to win any beauty contests. Still, underneath the visuals is a deep well of content and world building to explore that have been fascinating players for decades now. Why not try it out?

With a new expansion out this summer, this imaginative MMO is better than ever — and in fact, we consider it one of the best-kept secrets in the genre. And if Villagers and Heroes can run on a tablet (which, you know, it does), then it’s going to operate on your older desktop or laptop just fine.

Cryptic is a big believer in chunking up and instancing its MMOs, and that does have a positive net effect on performance. Between that and numerous graphical settings that can scale down to what your computer can handle, Neverwinter is a prime candidate to deliver a premier experience without sacrificing fun.

In my research for this article, EVE came up a lot as a great option for a low spec PC. That’s mainly due to the fact that space-faring MMOs don’t have to do a lot in the way of throwing gobs of landscape on the screen (black is pretty easy to draw). Sure, you might not be able to participate in those massive fleet battles, but older computers shouldn’t have a problem scooting around this galaxy.

I think I have one of these somewhere. Got any MMOs I can run on it? :D

It seems that MOP has an incessent need to mention CoH at every single possible chance. First, why is an illegal emulator on this list? Second, since it is, why not also one of the SWG emulators? I’m not an SWG fan, but surely at least one or two of them can be run on a low end system.

It seems that MOP has an incessent need to mention CoH at every single possible chance.

First, why is an illegal emulator on this list?

Because the game isn’t avaliable for being played, and the “illegality” of it, very much up for debate, according to specific country laws.

Second, since it is, why not also one of the SWG emulators?

I’m not an SWG fan, but surely at least one or two of them can be run on a low end system.

I guess. Probably because SWG is a way harder game to get into, and also because all SWG pservers are OBLIGATED to say “you need the original disks to play it”.

Years ago, when I used to play WoW, the only system I had available for a while was an old, low-end CPU (even for back then) with no graphics card (had to use the on-chip graphics engine when my graphics card went belly up one day). I couldn’t turn on any eye-candy, but it ran good enough.

Another one I played for a while on a dirt-cheap PC was Anarchy Online. Ran just fine even with all the eye-candy turned on (although, to be honest, it didn’t really have much eye-candy).

This is an incredibly apt article considering I’m stuck out of town for work with only the sad laptop. Of course, the one other downside. Which MMOs can I play where the internet might as well not exist for as unstable as it is? ;P
I’m using the opportunity to try out Villagers and Heroes since the podcast kind of sold me on it. At least after it took two hours to download. See the last point.
The narrated character creator is pretty adorable I must say.

I was kind of bummed when it told me after updating that I could no longer load EVE on my six year old Dell because the ancient economy processor didn’t support some shader version that was only like five minutes newer than the processor.

Dungeons and Dragons Online
Yeah, you didn’t really think about this one when you started this list, did you? But DDO is absolutely perfect for older machines with its lower graphical fidelity (that still manages to be attractive in its own way) and heavy use of instancing. Plus, it’s a great game with fun group dynamics, challenging puzzle solving, and robust character building. More people need to be playing it, is all I’m saying.

I completely want to agree with that, because i know DDO is a great game, but christ almighty, if their monetization model isn’t craptastic.

Yeah, it leaves a LOT to be desired. Quest packs are NOT my idea of fun.

I saw the mention of the TRS-80! One of the computers I programmed on in high school (along with the Commodore Vic-20, Apple II E, and the glorious Commodore 64).

But can they run on this puppy from my childhood? 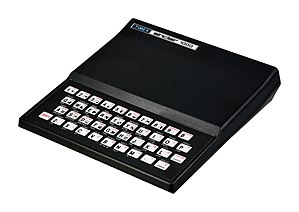 I agree, EVE was included and the LOTRO minimum requirements are on par with EVE’s. So are WoW’s for that matter, except for the 45GB install.

The WoW client is 64-bit now, so that might be an issue. LOTRO too.

I’ve thought about getting into DDO again but everything is so piecemeal, why can’t Standing Stone Games just bundle everything into the cost of the latest expansion, or give a deluxe option like Zenimax does for it’s chapters?