Whenever you see a studio call fans “passionate,” it’s almost always shorthand for “rioting with pitchforks and torches.” Guess what Star Wars Battlefront 2’s execs are calling its players this week?

DICE GM Oskar Garbrielson apologized to the game’s “passionate” community about the missteps that EA made in locking its characters behind a prohibitive grind and aggressively pushing microtransactions. He said that the team is disabling all in-game purchases with crystals, at least until the company can figure out a better way to implement them:

“But as we approach the worldwide launch, it’s clear that many of you feel there are still challenges in the design. We’ve heard the concerns about potentially giving players unfair advantages. And we’ve heard that this is overshadowing an otherwise great game. This was never our intention. Sorry we didn’t get this right. We hear you loud and clear, so we’re turning off all in-game purchases. We will now spend more time listening, adjusting, balancing and tuning. This means that the option to purchase crystals in the game is now offline, and all progression will be earned through gameplay. The ability to purchase crystals in-game will become available at a later date, only after we’ve made changes to the game. We’ll share more details as we work through this.”

This is the latest chapter in a saga that started when EA defended its decision to lock key characters behind an obscene grind by saying that it “provided players with a sense of pride and accomplishment.” Even after reducing the costs of heroes, EA still was taken to task by players for not fixing the situation or apologizing for the business model.

Unconfirmed rumors on Reddit by a supposed EA insider suggest that Disney has cracked down on EA ahead of the theatrical release of The Last Jedi.

I’d love to see Disney get fed up with EA and pull the license.

I recognize their MO from SWTOR, incredibly anti fun mechanic announced like it was the most wonderful thing ever, as player incredulity becomes player rage, they back off and delay it while they study better methods of making us eat that crap sandwich, and eventually it is implemented with a minor decrease in awfulness, with a smug, “we heard your feedback”.

While I 100% agree EA went way too far with this and I’m glad they’re being slapped over it, I actually do want some form of micro-transactions in the game. Because I want them to continue to support it for years to come without paid DLC as was their original idea.

They plan to support the game for YEARS as opposed to the single year of support that BF1 got and they want to do it for free. I’m totally on board for that idea.

They just need to do it through cosmetics, not star cards.

Kotaku just published a story about a supposed EA employee that said he was getting death threats. Only problem is he’s probably a hoax and theres no information he ever worked at EA or received death threats over a company and product he wasn’t involved with. So it seems like a case of stolen valor. https://kotaku.com/the-curious-case-of-the-ea-game-dev-who-said-he-receive-1820474458

Keep that in mind when you read that reddit update about the “EA insider” blabbing his mouth on a reddit victory tour while providing no real information.

Wow even IGN gave it a 6.5, specifically because of the ‘hostile’ progression system riddled with microtransaction hooks.

For now meaning :it’ll be back and double as exploitative as soon as the furor dies down and we can think of a way to get it white knighted”

Undoubtedly. I’m remembering what Fernando Paiz (producer of DDO when it went F2P) told a seminar of game execs way back when Free to Play was revolutionary (2009).

To wit, you can safely ignore what players say, they will still spend in your cash shop no matter what.

Itta be back, just in some more not so over top form. 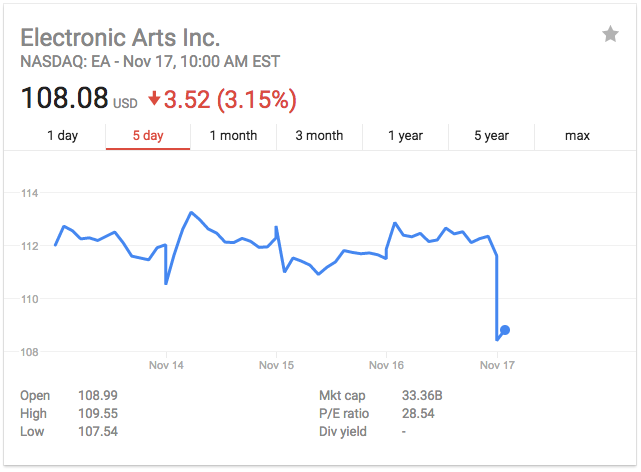 Well it did have a little effect on stocks.

And that ‘insider’ may just be someone BSing and getting lucky, but he did claim that credit costs for lootboxes/credit gains will be lowered/increased respectively within another day or two. So guess that’ll prove whether the dude’s ripping people off or not for karma.

This is apparently the most popular article on CNBC right now. There are plenty of other articles and discussions elsewhere going on about the news, and a lot of them aren’t really setting a positive narrative. EA is of course trying to tell shareholders that “This change is not expected to have a material impact on EA’s fiscal year 2018 financial guidance” via a Security Filing they did. https://www.sec.gov/Archives/edgar/data/712515/000071251517000095/form8kfiled20171117.htm

Overall though this has been one very interesting week and the pressure needs to keep being held on EA to make sure that crystals won’t be able to purchase any lootbox with Star Cards/Credits/Crafting Parts that would give extra advantages.

One problem though is that it makes the Deluxe Edition all the more worthwhile because you’re getting early weapons + specific Tier 4 Star Cards that can’t be obtained by whaling it up anymore. But that’s a lesser problem in the long run I guess.

Hopefully DICE will be able to start making some real changes that make the experience less of a slow, painful grind with aggressive/hostile P2W microtransactions.

You see? The giant can bleed. It may not be much, but it will leave a mark.

Yeah, but it was a bigger giant to make this giant bleed… Still a success for us.

You needed to put mouse ears on him and change it to Papa Disney with the gun. ;)

WRUP: The last Guild Wars 2 elite specs for the next...