Maybe I’m turning the corner. Maybe I’m getting acclimated to how things work. Or maybe the game caught me on a good day. Whatever the reason, this week’s jaunt through Citadel: Forged with Fire was downright enjoyable. I might even say it was fun.

A large part of that enjoyment is likely a result of getting things done. Not only did I snag a few levels, but I also started to really lean in to the systems of the game and achieve what I set out to achieve, which is a mode of transportation. That, of course, didn’t come without a few twists and turns along the way. 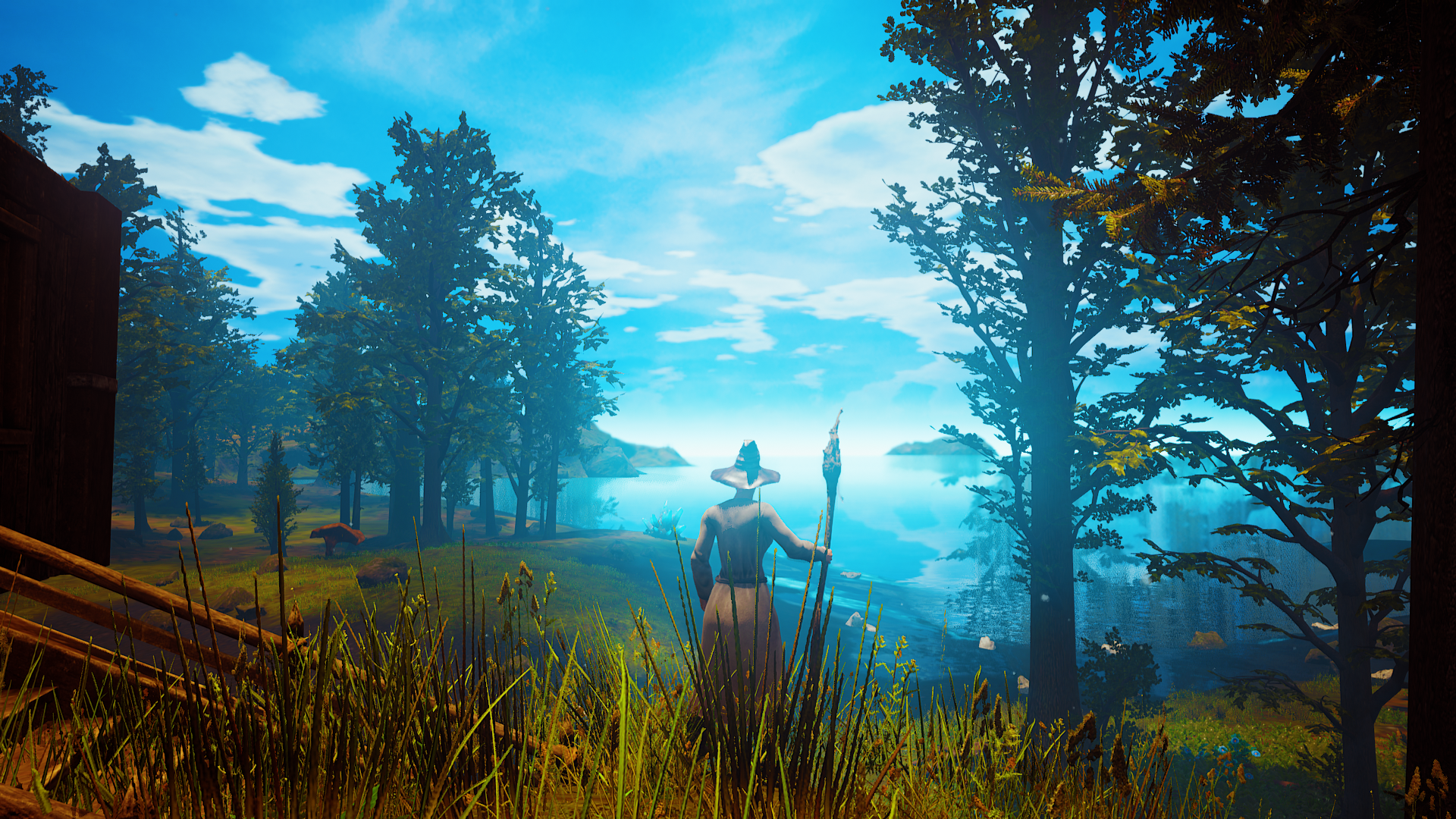 Most of the reagents I needed to build the voted-for flying broom mount were already in my inventory, save for one: Faery Dust, an item that (logically) only drops from faery creatures. Thing is, I only encountered one of these things errantly when I was wandering the world, and the instructions I had found online simply said that these monsters are “everywhere.” Still, I elected to follow through with the other poll choice – wander around and investigate points of interest – and hope that I would run into the monsters I needed.

Most of these POIs are pretty sub-par in the same way that certain landmarks in a game like No Man’s Sky are; they basically serve a singular function and can be effectively dealt with within a matter of seconds. For example, the caves I found are just a small little cave with about two or three enemies to clear out and some treasure to find. I went to a Monolith which provided my character with a quick boost to movement and critical strike chance. Enemy camps are just campfires with enemies standing around.

I’m not sure what more I was expecting, but a tiny bit of dynamism would have been nice. 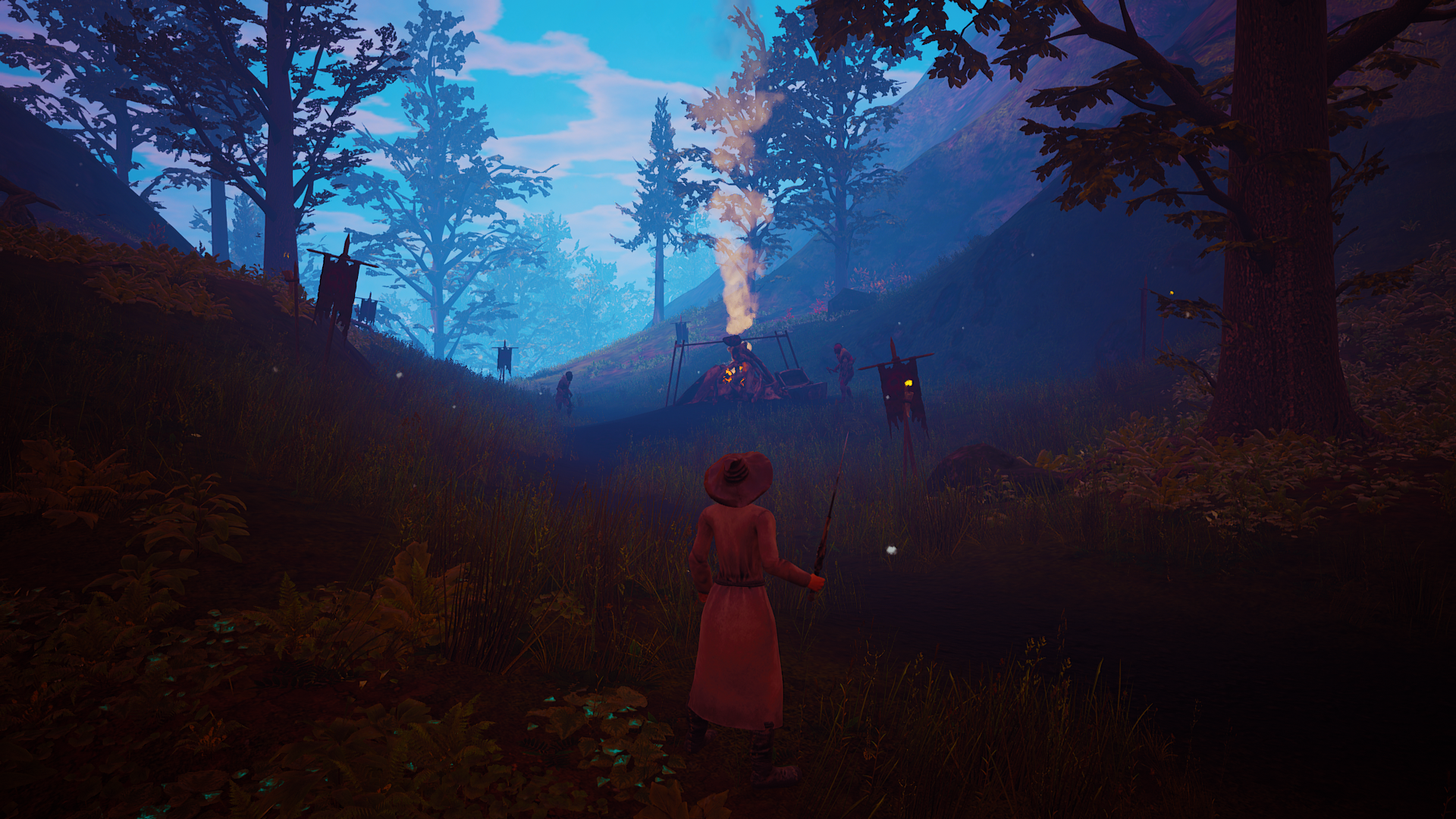 Still, getting to these locations helped me to further open up the map of the world, and getting into the fights I did yielded some significant experience. Seriously, for all of the XP I was getting doing pastoral things like crafting and gathering resources, killing pigs and bears and wolves coughed up big chunks of XP.

It also reaffirmed that combat in this game is basically the combat model from The Elder Scrolls: Morrowind coated in dense mud. Things move slowly, weirdly, and jankily, especially with one of the spells I have that sends enemies flying in the air without any reaction from the target whatsoever. Honestly, though, I started to find enjoyment in the jankiness. Especially when sending enemies into the sky caused them to glitch out and stand there without another move or attack; a glitch that I gleefully took advantage of to score several easy kills.

Pride would come before the fall, however, as an enemy camp full of orcs proved to be a bit too much for me to handle and I suffered my first defeat on this server. Which led to another one of those obnoxious survival sandbox contrivances: the corpse run. To paraphrase a fun movie, damn to the depths whatever muttonhead thought up corpse runs. 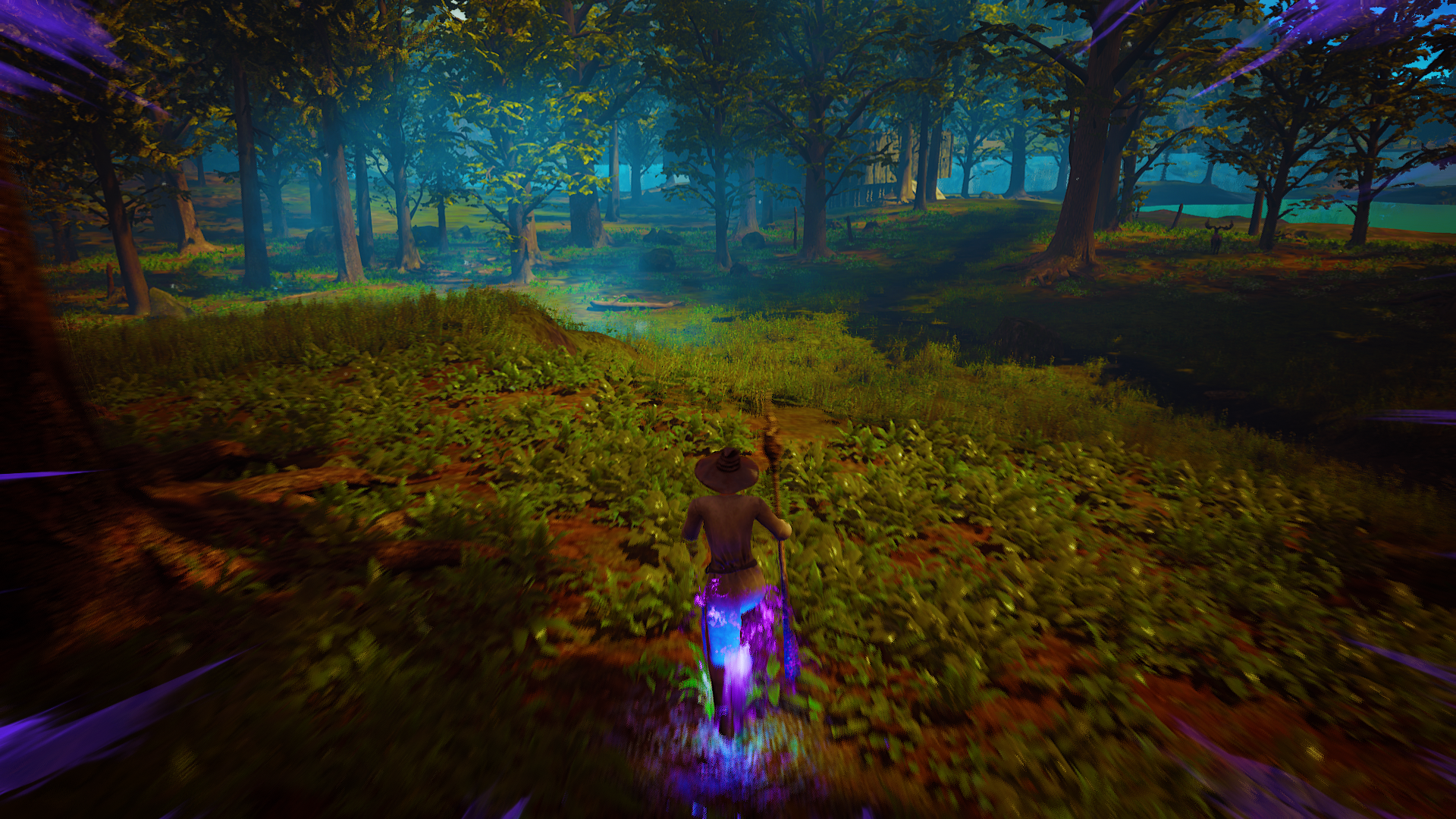 Spawning nearly 1,000 meters away from my body, I was left with a sense of concern. Any number of things could go wrong now. Maybe this would be the day that someone would loot my corpse and all of my reagents would be gone. Maybe I would die again and that meant I’d lose my stuff. Maybe I would get to my corpse, but those same orcs would lay me out again and I’d have to make the journey back once more.

Mercifully, none of these nightmare scenarios played out and I was able to get to my dropped stuff without issue. Still, I didn’t want to risk it and snuck my way over to my corpse bag. I don’t even know if there’s any sneaking mechanic in this game, but I wasn’t going to take any chances.

It wasn’t all failure, though. Changing directions towards other enemy camps and other POIs along the way netted me several sweet rewards, like some new equipment, a couple of wands, a shiny sword, and, more importantly, two enemy camps full of the Sprite enemies I needed to get my Faery Dust. On the way back, I even found a place where Iron Ore can be readily harvested, which isn’t a reagent that I was finding much of before. 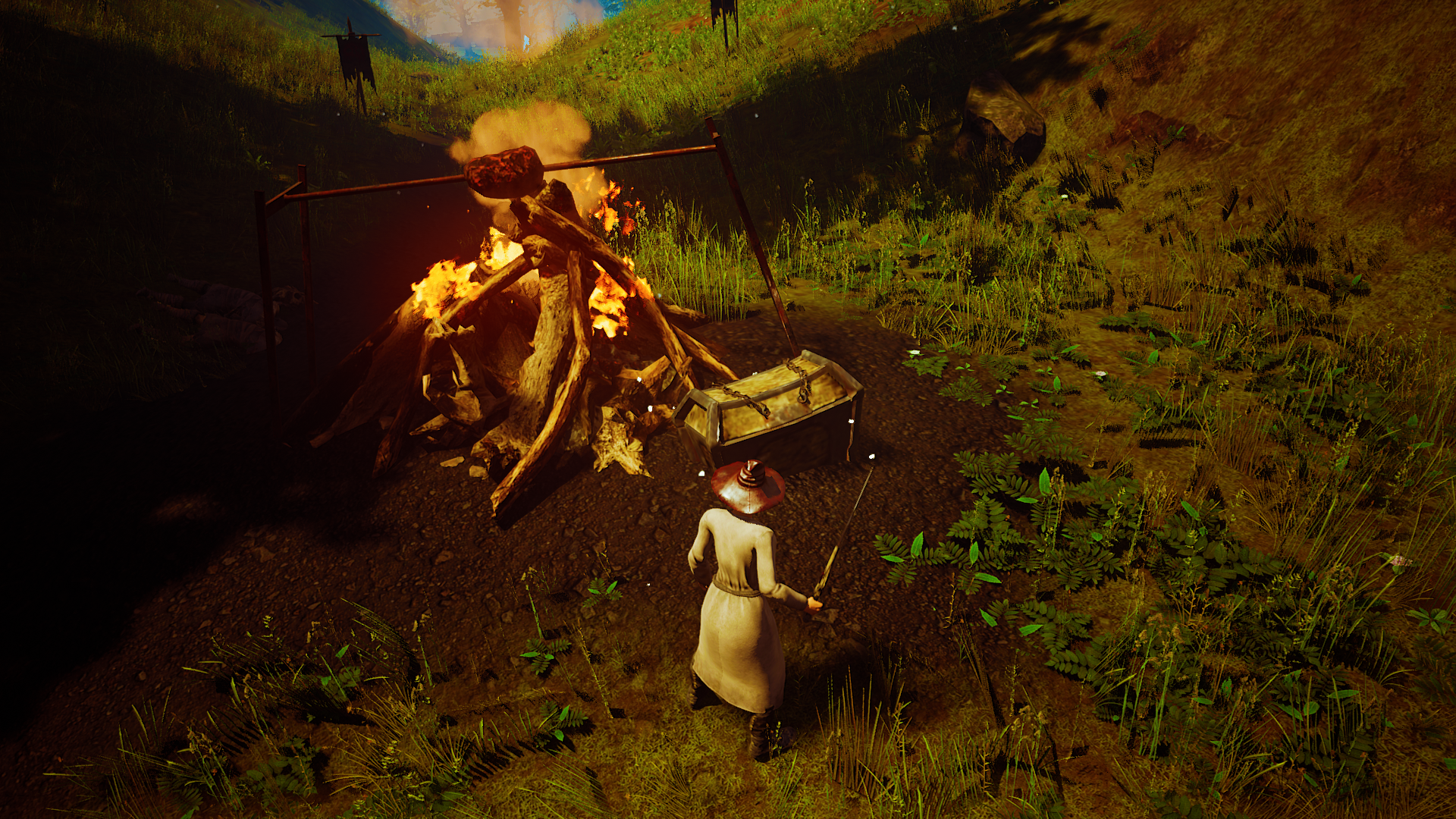 It was an extremely productive few hours for us, friends. We got some nice loot. We uncovered things to do and places to go. And best of all, we got our flying broom. Which, like nearly everything else in Citadel: Forged with Fire ended up being kind of underwhelming and weird but still enjoyable all the same.

I suppose the positive feedback loop of this kind of game is starting to make sense now. I’m beginning to feel stronger both in terms of character stats and in terms of personal ability. I’m getting more tools to streamline my chores and refine my creation processes. I’m having an absolute blast figuring things out and growing familiar. I’m looking forward to heading into the sections of the map covered in a fog of war to see what’s over the next ridge.

Guys, I think I’m starting to like this game. 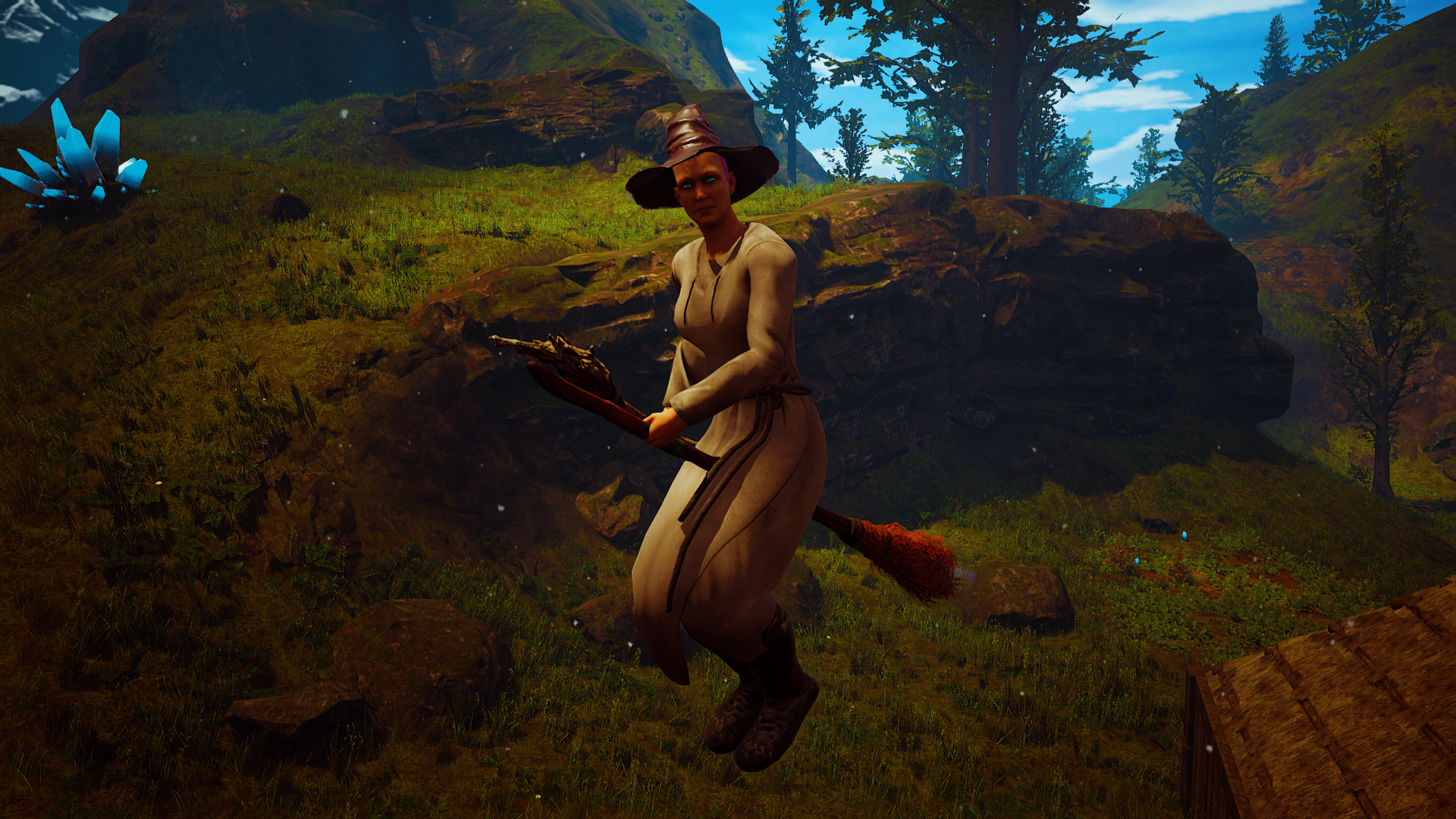 As much fun as I’m having doing the things I was instructed to do, it’s time once more for a couple of fresh polls, though both of these should keep the good times going. The first is effectively an extension of last week’s answer to explore and find POIs, just more a question of which direction to head. I’ve got a couple of ideas here: go north, towards where most of the uncovered territory is, or head easterly towards the general direction of one of the other safe zones, which could still provide opportunities for danger.

So, which cardinal direction are we going?

Which general direction should we head next?

The second poll seems anathema to the first, but I’m pretty sure I can do both of these things. The Noob Box is becoming a bit cramped owing to the amount of crafting tables and other things I’ve been building. It’s not impossible to deal with, but things are a wee bit tight. So I’m curious if anyone reading would like to see me go all Bob Vila and design a better, nicer base of operations or if I should just ignore it and get on with exploring and leveling up.

What should be the primary focus this week? 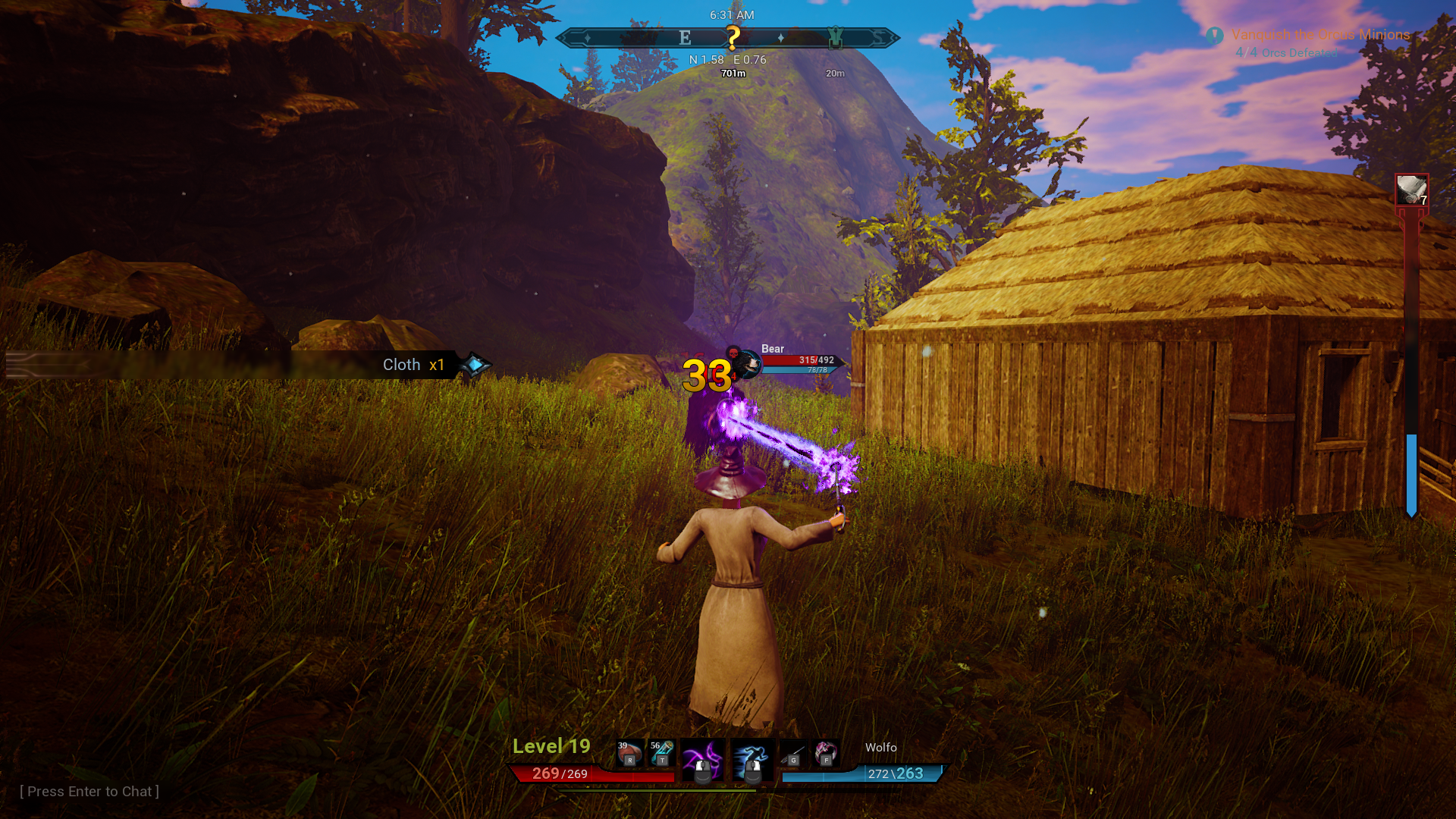 Like usual, polls close this coming Friday, November 22nd at 1:00 p.m. EST. Also, be sure to tune in to OPTV this Saturday, November 23rd, when I go live with some Citadel: Forged with Fire livestreaming as we press on with our chosen activities. Hope to see you there!