I’ve been playing GTA Online for 50-something hours now, and while I’m by no means an expert, I’m a lot smarter about the game than I was three weeks ago. If you’re just starting out in the multiplayer version of Los Santos, I’ve got a handful of quick tips that might save your time, your money, and maybe even your avatar’s life!

Eat, drink, and be merry

Did you know that you can buy food and drink in GTA Online? Apart from the novelty of seeing your avatar take a soda can out of a vending machine, chug it, and toss it on the ground, eating and drinking can also save your life — or at least your time and possibly your pride. See, eating a snack replenishes your health bar, so the next time you find yourself pinned down and taking fire from a bunch of angry NPCs (or players), hit your M key, scroll down to your inventory, and then scroll down again to the snacks entry.

Assuming you’ve bought some food, you can heal up really quick and perhaps live to fight another day. Vending machine sodas like the ones you’ll run across in AmmuNation won’t help you much here, though. You’ll need to go to a supermarket or gas station and instead of holding it up, approach the clerk, press your E button, and stock up on the consumables available from the resulting menu.

Cash is literally king in GTA Online. Missions reward cash, mobs and players drop cash, and you’ll need a lot of cash to buy your favorite aircraft or sports car, not to mention when you’re trying to restock all that ammo you chewed through on your last job. Though you’ll occasionally need cash in hand to purchase things like the snacks mentioned above as well as some of Los Santos’ more illicit services, it’s better to bank your hard-earned money as soon as you finish earning it, particularly if you’re playing in a public match instead of a solo or friends-only slice of the city.

Why? Well, as I said, players drop cash, so the next time you succumb to a head-shot, you’re going to leave a little something from your wallet behind — unless you’ve transferred your cash to you bank account, that is!

There are lots of ATMs scattered across Los Santos, and they function much like their meatspace counterparts aside from the need to enter a pin number. I’d avoid these, though, both because they take time to find and because players have been known to camp them. Instead, pull up your cell phone, scroll down to the internet icon at the bottom, and then find the Maze Bank page. From there, you can automagically deposit all of your cash directly into your protected bank account and get on with your dastardly day. 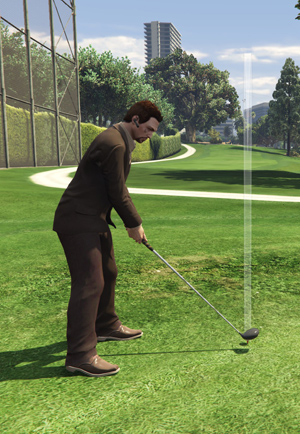 Sometimes I find myself killing time while waiting for my friends to log into GTA Online. Other times I log in and I really have no idea what I want to accomplish in that particular session. It’s good to have a fallback plan so that you’re not just wandering aimlessly around the city pointing your gun at random NPC drivers and laughing as they abandon their cars in the middle of the street and run screaming into the night.

Not that you or I would ever do that, of course.

Anyway, a fallback plan. Mine involves stealing and selling a car before playing nine holes of golf. Boosting cars in GTA Online is good not only for building your own personal collection, but also for making small (but consistent) monetary gains. Every 48 minutes, you can sell a stolen vehicle to one of the many Los Santos Customs shops scattered across the map. The payouts vary based on the rarity of the vehicle, with the top-end Felon GT (basically a meatspace Maserati) netting you $9,500.

Now, you won’t find a Felon on every street corner, naturally, but even the random SUVs and bargain basement clunkers that you can jack basically any time and anywhere will earn you around four thousand bucks. If you find yourself in a lengthy solo session, then, make sure you’re turning in a car every 45 minutes or so because it does add up.

After I’ve sold my first stolen car, I head to the Los Santos golf club and blast through nine holes. Unfortunately Rockstar won’t let me play a full 18; perhaps the firm will remedy this in a future update. In any case, it takes me around 20 minutes to complete a round, and I typically earn a bit over 2000 XP for my trouble. And hey, the golf minigame is really fun! It’s much more fun than actual golf, which in my case amounts to a very expensive curse word brainstorming session.

If my mates are still dragging their heels as I’m walking off number nine, I usually play another round, get some more XP and stat gains, and then jack another car for another few thousand in cash.

When I first started writing about GTA Online, I mentioned the lack of a grind. A few readers took issue with that, which is fine; grind and grindiness are almost completely subjective. I bring it up here mainly because I couldn’t think of a word other than “grinding” to use on this paragraph’s sub-heading!

Technically, what I’m about to detail is grinding, but in my case I find the gameplay involved to be incredibly fun, so even though I’m doing it in a repetitive manner expressly to earn cash and XP/RP, I don’t consider it a grind. 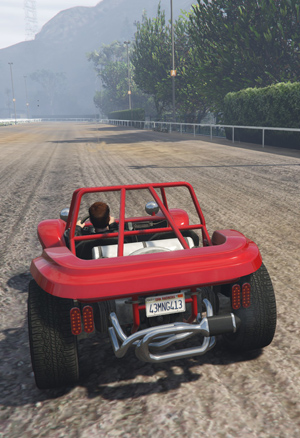 Anyway, one of the fastest ways I’ve found to earn money and XP is through GTA Online’s numerous race lobbies. The only problem with that plan is that some of the people playing this game are unbelievably good at it. Seriously, take a look at the world records for the various race courses and you’ll see what I mean. So, while you can earn a decent wage by entering public races, it’s more efficient to grab a buddy and purposefully trade race wins in your own duo instance.

This is also a quick way to rank up and buy vehicle upgrades, many of which require either a certain character level, a certain number of wins in a particular racing class, or both. And much like the golfing minigame, GTA Online racing never gets old. The hyper-detailed car and damage models coupled with the silky smooth controls and the variety of tracks scattered around the expansive and gorgeous world map combine to form a gameplay activity that I’d happily partake of again and again even without the progression rewards.

Oh and if you don’t have any friends playing GTAO, you can opt to race solo — for a smaller payout, of course!

another way to grind xp is to kill npc’s then outrun the cops and escape. evading the cops gives some xp.

Got my Bugatti online. Still need to complete story though

Since finishing the game in story mode
I use and find multi play now and only just for a reason to be chaotic.
I do everything I can to make money get 5 stars and hide to lose them.
The multi play is rockstars neglection of not really giving thought about what it is and why it was created by modders in the past.

We don’t want to be pounded by the sight of blue “play rooms” like kids in a kindy garden! These only make it look like shit all over the map!
We want the freedom and ability to mass, form gangs, take over areas and defend those points, not in another silly “other” room, but on the actual map!
This is Rockstars flaw in Multi Play as far I am concerned. Rockstar never thought why modders made multi play in the past, all rockstar did was place it in as it was a demand, they did not use any real direction or passion to it.
As per usual in “series game” these days the dev is so ignorant to what the original players wanted, shouted & created for themselves. Hence the Modding.
I do believe Rockstar are so set into their own casing of selfishness with popularity that they are blind to the community needs.

Good tips! Golf is also a pretty decent way to build up your strength stat.

I fight the urge not to run people over on the sidewalk daily now. …in RL….

Craywulf I got the game day one on Green Man Gaming for $45 using a 25% coupon. Not sure if they still have that going on, but the almost always have a 20% discount coupon floating around the interwebs.

Probably be as cheap as it goes until the Steam summer sale 16.

Careful out there kids when playing with pugs. After something funny happened with my account. I popped over to support and there are a lot of people being banned by being shot with money (yes, shot with money) by modders.

Craywulf KenAddeh Of course. I’m also one of those who waits for sales. I totally understand that. If you can hold off until a sale, then more power to ya. It’s all worth it in the end! :D

KenAddeh Not disputing it’s worth, just simply following my own personal gaming budget.