Since its debut on Xbox back in 2001, the Halo franchise has been a massive powerhouse and a mainstay for shooter fans. To date, there have been 13 releases, including spin-offs and repackaging, and at least one new title (Halo Infinite) is on the way.

The ongoing saga of Master Chief and his plucky friends taking to the stars to fight back against the alien Covenant have sold over 65 million copies combined and made an oh-so-modest $3.4 billion in sales. As the franchise evolved and branched out, it shouldn’t be much of a surprise that an MMORPG was considered and even partially developed. Not to be confused with 2015’s aborted Halo Online, this untitled Halo MMO has long intrigued fans of both the game series and the massively multiplayer genre.

What would this Halo MMO have been like? What do we know of it a decade after its development and cancellation? Let’s investigate in this edition of The Game Archaeologist! 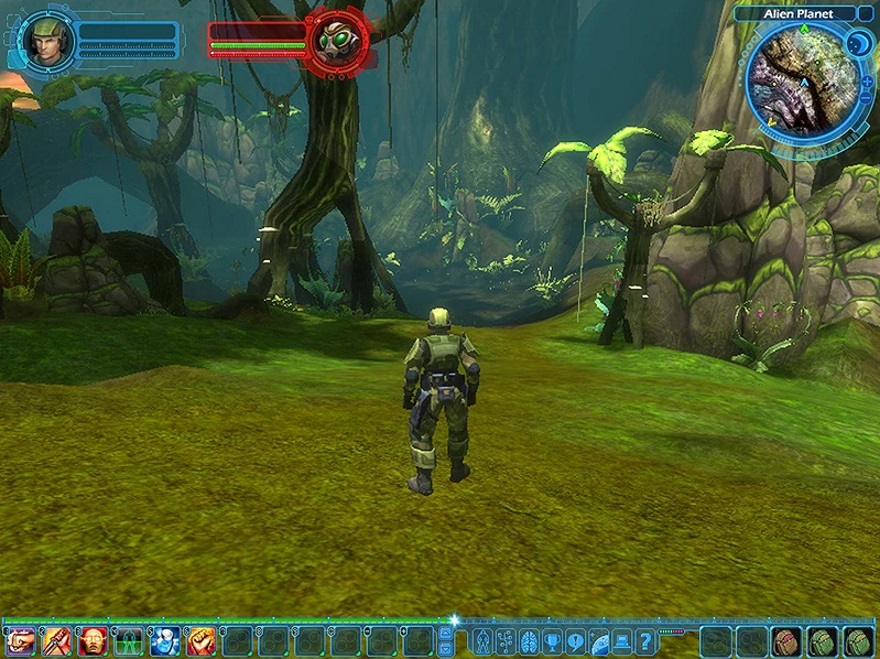 Code-named Titan. Not that Titan.

A joint venture between Halo-creator Bungie and Ensemble Studios, the Halo MMO project began around 2004 thanks to the official greenlight from publisher Microsoft. Ensemble was hot to make MMOs, and this seemed like a great fit. The project, code-named Titan (which had nothing to do with Blizzard’s own Titan MMO), was kept tightly under wraps as money and developers were poured into it.

In the mid-2000s MMORPGs were all the rage. This was especially true thanks to the incredible success of World of Warcraft, which was released in 2004. Ensemble was hardly alone in chasing the model that Blizzard had seemingly perfected.

“World of Warcraft in space”

In fact, the Ensemble team was shameless in widely adapting WoW to the Halo MMO, in particular the fomer game’s “timeless” stylized graphics. From the few glimpses we have into this game, we can see that it’s a little more colorful and cartoony than the regular Halo games of the time — and that was on purpose. It’s why the project was internally referred to as “World of Warcraft in space.”

One WoW Killer, locked and loaded

Everyone involved in the project was deadly serious about taking on World of Warcraft, as rumors had surfaced about this being the fabled “WoW Killer.” An anticipated budget of $90 million was estimated to complete the sci-fi MMO. In a funny twist of fate, World of Warcraft’s Greg “Ghostcrawler” Street was working on this game before Ensemble closed and he moved over to Blizzard.

“You have to remember that Ensemble came from a standpoint of being really good at competing against Blizzard Entertainment [with Age of Empires vs. Warcraft],” said Monk in 2010. “We had all this incredible talent, we had the right people, the right passion, we had a phenomenally successful IP — the Halo IP. We were going back in time for the Halo franchise to broaden the story a little bit, in the exact same way that Star Wars has gone back in time so they can tell a more broad story, and we had a company that had our back when we started and the funding to put together that type of project.”

Mages use mana, PSI use psion

Other features that this massively multiplayer game would have included some sort of public questing system and cover mechanics. Instead of mana as a resource, players would have drawn from “psion,” and all would have the chance to hop into vehicles like the Aardvark or Warthog to rampage across alien worlds.

We have a rough idea of the class lineup that was in development, including Assault, Forerunner, the shapeshifting Mimic, Marine, PSI, Rogue, and Spy. Ensemble had a villain’s gallery of enemies for these classes to tackle, such as the Demons, Sigma, Diggerz, and Sentients.

Changing of the guard

By 2007, a working multiplayer prototype had been created with plenty of the elements that would be in the finished game. Unfortunately, notoriously MMO-shy Microsoft eventually pulled the plug on the Halo MMO that year without ever having formally announcing its existence. This certainly wasn’t the first time that the company had axed a developing MMO, but the news certainly let down some fans looking to play in a wider, massively multiplayer universe.

“[Microsoft] was looking really hard at the Nintendo Wii and they were really excited by the numbers that the Wii was turning,” explained Monk. “So part of this changing of the guard at Microsoft came along with the changing of the attitude to this very expensive, very long and very protacted $90 million USD project we were working on. To cut a long story short, Titan was closed down.”

“[The Halo MMO] was in production for a long time,” confirmed Dave Pottinger. “The Halo IP was a great IP to launch an MMO with. Microsoft hasn’t had the best track record with those. And we worked on it for a long time — we had staffed up an almost 40-person team. And then there was some reorganization at Microsoft, and the new bosses thought it wasn’t the best idea anymore.”

Following the cancellation, concept art, interviews, and other scraps of information eventually leaked out to confirm the existence of the project. There was even a prototype mock-up of the game’s user interface that tantalized fans as to the missed opportunity. And one artist might have possibly revealed the game’s true name: Halo Universe.

In any case, we never knew much about it while it was being made, which is why the odd saga of this cancelled MMO doesn’t hit as hard as some others. Still, it would have been quite interesting to see a massively multiplayer Halo come out swinging.

Could a Halo MMO have taken World of Warcraft down a few pegs — or even knocked it out of first place? Dusty Monk believed that it would have: “Even though a lot of people talk about how you just can’t build a WoW killer, I absolutely believe that we could have built an MMO, if Microsoft had maintained their commitment, that if it hadn’t been a WoW killer it certainly would’ve competed.”