The Skyforge devs have released a pair of infographics summarizing a data dump from an October snapshot of the game. What have we learned? People really like Paladins.

“At the time this data was collected, Aelion had 1,100,000 Immortals inhabiting the planet, the majority of which are spread across 12,439 Pantheons! In addition, clearly proving its dominance, the only class that every player has used at least once is the Paladin with the other starting classes tailing very close behind.”

Obsidian and My.com have also revealed that players have killed almost 3 billion PvE enemies and that the biggest guild has 336 people on its roster. Check ’em out below! 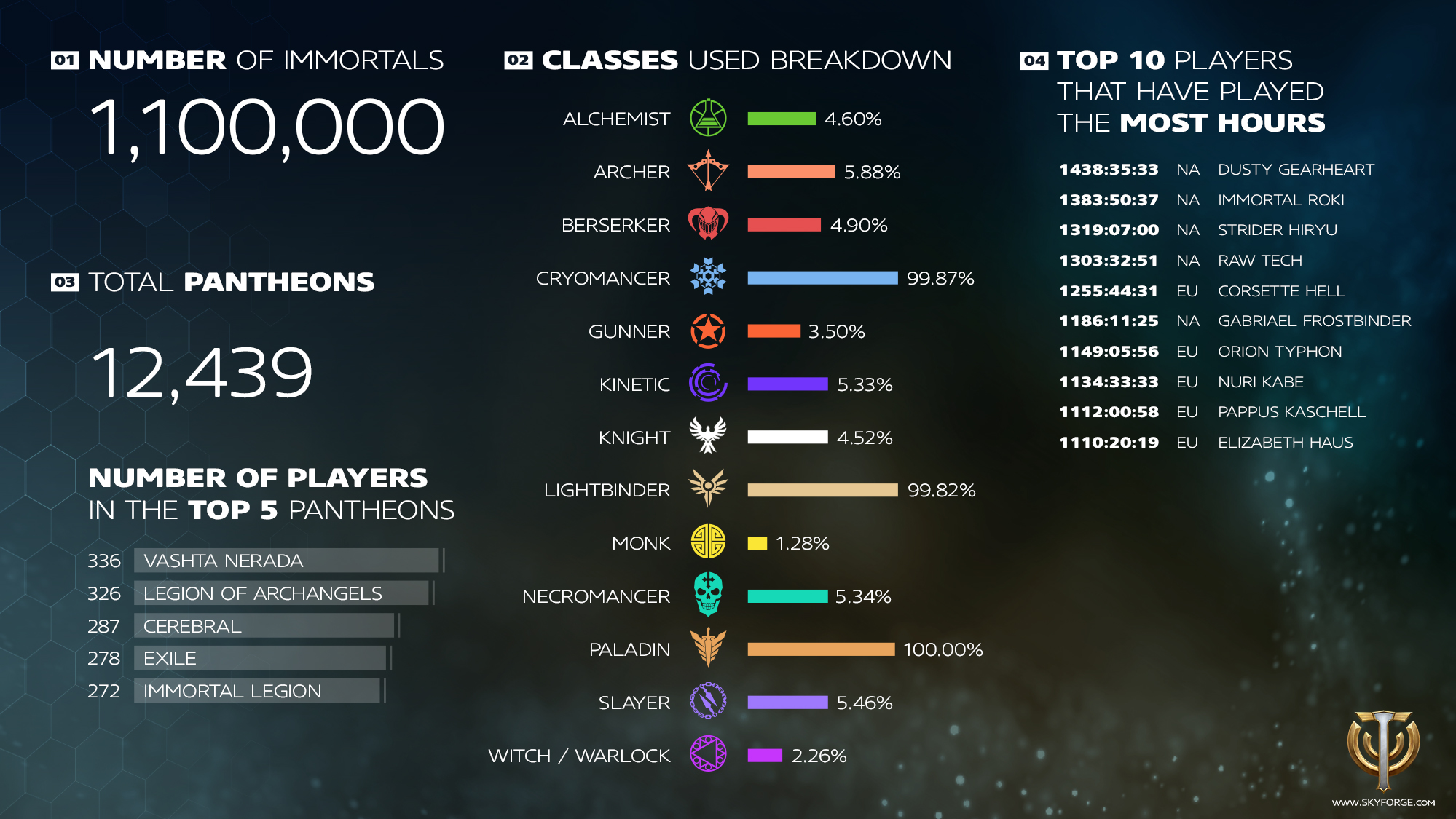 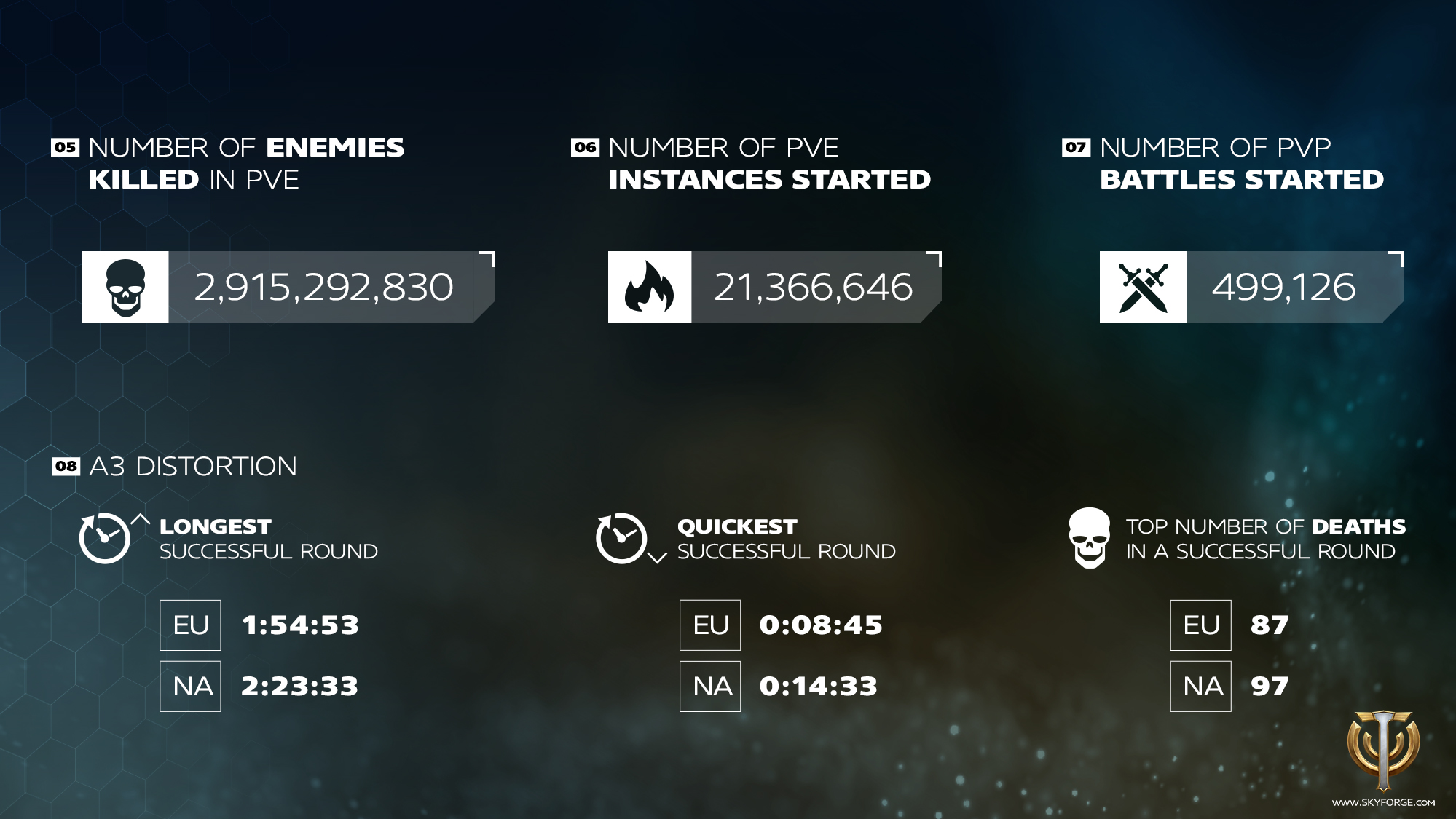 Pashgan Linaea The more lilke reason being that most people simply do not play this game for that long to begin with.

and for good reason.

Icnoevil  …A dozen of them per day behind spambots, of course.

Any time games release figures like this I actually think the opposite of the poop they are trying to sell. Games that release these kinds of numbers are always doing pretty horrible….right along the lines with “”we have 20 billion REGISTERED users”

Vanblod CloakingDonkey alright maybe it isn’t but the point stands. Even TERA and Black Desert have rotations and all they add is a host of frustrating bunny hoppery on the screen and slow moving telegraphing giant monsters, because they’re the only fun thing you can fight with action combat. Because as soon as you fight a group of them you have that ridiculous “queuing up to get slaughtered” nonsense ;)

Not surprised to see Cryomancer that high. I really enjoyed Cryo in Beta. Shame they buried Warlock behind a grind wall. Very cool class design.

CloakingDonkey It’s a problem that won’t be fixed in MMORPGs. The closest I’ve seen to solving the issue at this point is Wizard 101, ironically. It has TGC combat but even in Wiz 101 you will find yourself repeating. The saving grace is if you are soloing places you’ll have to add just your “deck” for optimal damage and defense because some skill are virtually uses on particular encounter because monsters come in 6 different elements.

Wildstar was suppose to make a run at it. I played a Medic but I would only be swapping out skills occasionally. Then again repetitive combat is just gaming in general. You point your gun and shoot in FPS games. That’s basically it haha

CloakingDonkey Skyforge isn’t action combat. It is exactly like every other hotbar MMO, except with even less abilities to play around with. Sure, they “hide” some low gcd abilites on your mouse… but does that really make it an action combat game? Projectiles track, melee attacks track, there is tab targetting, the only attacks you are allowed to dodge are AoE attacks you avoid in every other MMO RPG ever.

I just totally disagree that this game is action combat in any way outside of the camera. It is also awful in several other ways :P

this game perfectly exemplifies why I don’t like action combat in MMORPGs.  It’s all the concessions you have to make. It ends up being just if not more repetitive than hotbar based combat. ESPECIALLY as soon as you figure out what abilities are best.

People actually play this trashcan of a grinder? Wow.

nshelton  I only really know Strider Hiryu out of the NA ones, he’s pretty cool~