I’m kind of in love with Star Wars: Battlefront. I shouldn’t be, really, because underneath the glitz and gloss, it’s a pretty pedestrian multiplayer shooter. Electronic Arts tapped Battlefield maker DICE to clone its tentpole franchise in a galaxy far, far away, and this week the firm delivered the first title since Disney famously acquired the money-printing IP from George Lucas, closed down Lucasarts, and farmed out game production to EA.

I bought Battlefront at midnight on Tuesday, have played it slavishly for 20-plus hours since, and now feel like I have a good enough grasp to profile it for you in this week’s MMO Burnout.

Though it’s hardly an MMO since it maxes out at 40 players per session, DICE’s franchise reboot apes the modern MMO genre’s obsession with progression, and it takes another page out of the MMO dev handbook by covering up its lack of features with dazzling visual spectacle. It’s highly successful at the latter, because it’s by far the best-looking Star Wars video game ever published. But shouldn’t it be? It’s not only the latest and greatest, but it’s also the lovechild of obscenely rich corporate parents. 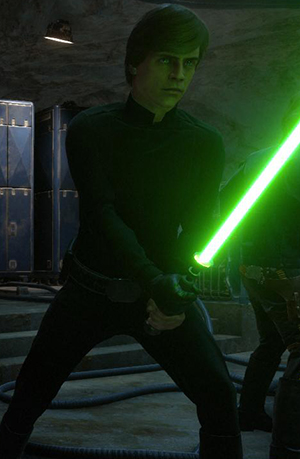 At the end of the day, Battlefront boils down to shooting and dying and shooting some more. I got my feet wet chasing three-star ratings on the five single-player training missions, which run the gamut from arcade-style X-Wing vs. TIE Fighter dogfighting to a breathless speeder bike chase on Endor to controlling AT-STs, snowspeeders, and finally Darth Vader.

After that, it was a cursory glance at the single-player battle missions, which give you the choice of fighting against a friend and a hail of bots or just the bots. Finally, there’s a co-op mode that’s one of those survive-as-many-waves-as-you-can affairs.

The game’s reason-for-being is of course its multiplayer, of which there are nine game modes. Supremacy and walker assault are the most fun for my money, as they feature 40 players and typically offer lengthy games rife with strategy and spectacle. There are also variations on capture-the-flag, small-scale skirmishes using heroes and villains like Han Solo, Princess Leia, and Boba Fett, as well as an amusing one-hero-vs.-everyone else slaughterthon.

Progression is level-based, and you can opt to spend credits you earn in battles to unlock new and more powerful guns as well as star card abilities and cosmetic avatar flair. The star cards are an effective if goofily unimmersive way of presenting Battlefront’s special abilities. They include everything from thermal detonators (i.e., grenades) to shot upgrades to jetpacks. Most of these abilities have cooldowns and some require charges, which you can occasionally find in the game world or purchase using in-game credits earned during matches.

Gameplay is exceedingly challenging, both because of the maps and their various strategies and because I’m getting too old for this sort of game. If I manage to break even on my K/D ratio in a given match, I call that a success. Most of the time I’m dying twice as much due to what I’m assuming are kids who have either memorized the maps in beta or simply have better reflexes. Or both.

For the most part, Battlefront’s controls are rock solid. I’m playing on a PC, though I do switch to my Xbox 360 gamepad when flying ships or driving speeder bikes. Standard shooter rules apply, so you’ll need to have quick reflexes, good aim, and a firm grasp on how and when to use your guns, your special abilities, your melee attack, etc. Fortunately, DICE has done an admirable job both recreating Star Wars weapons with exacting precision and balancing gameplay around them so that most feel distinct and situationally useful. 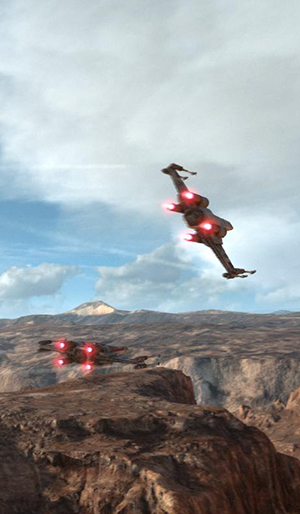 But when I say that the controls are solid for the most part, I’m talking about on foot. Battlefront’s flight models are silly even by arcade standards, and I found the aerial segments nigh unplayable with the default controls due to the oversensitivity. If you even think about nudging your mouse, your X-Wing will break off at a crazy bank angle with a turn rate so ridiculous that enemy players could fly in a straight line and they’d still be challenging to hit on account of your own craft’s crazy pitching and yawing. The right-click target bracketing helps a bit, but flight is far too gamified for my tastes.

Oh, and get ready to be free kill fodder for whoever scoops the play-as-Slave-I (or the Millennium Falcon) power-up as the round begins!

Also, I encountered some brief frustration when wrapping my snowspeeder tow cables around AT-AT legs. The designers decided to remove user agency over the speeder once you fire the cable, and it’s jarring to go from full flight control to a mouse-based minigame where you’re tasked with keeping a ball centered on a series of lines. I got the hang of it after a time or too, but I’d have preferred to just continue flying the speeder myself and doing my best Wes Janson cable-detachment impression when I was darn good and ready.

I should probably spend some time gushing about Battlefront’s presentation, but really what’s the point? Go watch the original trilogy in hi-def and you’ll see what the game looks like. In fact, the game looks better, because it lacks those infernal artifacts around the TIE Fighters and other relics of 1980s effects tech. With apologies to Star Wars: Galaxies and its unequaled virtual world gameplay, Battlefront really does make me feel like I’m fighting in a galaxy far, far away, and it runs at a buttery smooth framerate regardless of map or player count. Oh and the sound, good God, man! The incomparable John Williams plus the legendary Lucasarts effect library equals enough said.

Finally, I can’t stress enough how much I adore the fact that Battlefront is an original trilogy title. I know that those of you who grew up with Episodes I, II, and III enjoy them and that’s swell. But I don’t enjoy them — at all — so playing an OT game of this quality after 15 years of prequel-inspired poodoo is like a long drink of water after crawling across the Dune Sea.

Look, I’ve never been one to hate on Electronic Arts. I played crazy amounts of NCAA Football before ignorant athletes and their opportunistic lawyers pulled its plug, and some of the firm’s original franchises (Dead Space, The Sims) are great fun. With Battlefront’s monetization scheme, though, the publisher seems intent on embracing its evil empire reputation. 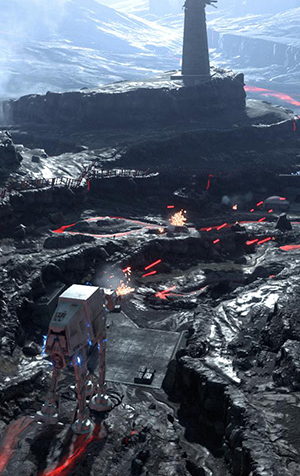 First off, there’s the “season pass,” through which EA is asking an ungodly $49.99 for as-yet-unannounced expansion packs. What will these contain? New maps, surely, and possibly new vehicles, weapons, and progression opportunities. Is that really worth buying the game twice, though?

And while EA deserves credit for resisting the temptation to slather Battlefront in launch-day microtransaction slop, you can rest assured that it’s coming. Look at how Turn 10 recently backdoored Forza 6 to get an idea of how it will play out.

Cash shop support is already in the game; you can see how easy it will be for devs to slap weapons, weapon skins, outfit additions, and the like right into the numerous unlock trees. And that’s before I even mention XP accelerants and various pay-to-avoid-grinding trinkets.

The other major faux pas is DICE’s decision to omit a server browser, which is flatly unacceptable for a PC shooter like Battlefront. I know why they did it — future monetization opportunities and funneling gamers to the inevitable Battlefront 2 — but that doesn’t excuse sacrificing community building and team play opportunities for random, console-style matchmaking.

Ultimately the new Star Wars: Battlefront is exactly what you’d expect — a big and beautifully realized love note to the original trilogy wrapped around an average shooter that doubles as a future microtransaction platform. Harsh realities aside, the developers clearly adore the IP and have given us one of the very few run-and-gun titles worth playing for the production values alone. If you are similarly enamored with Star Wars and you don’t mind constant headshots from a legion of shooter savants who always end up on the opposing team, you will no doubt enjoy the newest Battlefront.