Game Director Romain “Tilty” Amiel has just informed MassivelyOP that The Secret World’s new membership reward system will be launching tomorrow, February 9th. That means that subscribed players will receive their reward goodies depending on which tier of membership they’ve paid for, from 30 days all the way to Grand Master. Those who are still debating on whether or not they want to purchase the GM pack (and get all the goodies up to the one year tier delivered immediately) have only until tomorrow to decide before the pack disappears forever.

Amiel also announced that the Valentine’s Day item store update will also launch at the same time, so if you are in the mood for love — or you just want that dance that you missed last year — you’ll have that chance. 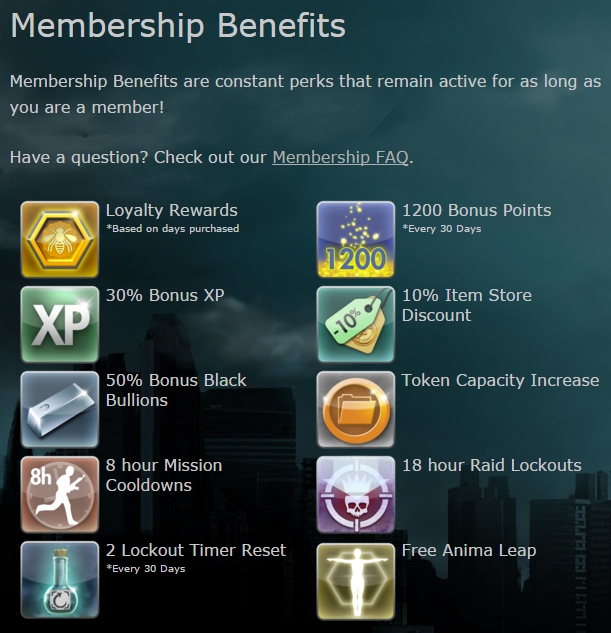 tanek_09 I still have the stack I bought from the vet rewards! Does not ease packrattiness much P

Useable once an hour. That part is annoying. It should be useable all the time or every 15 mins. Why once an hour?

As a GM since beta I completely agree. I should not have to see that screen upon loading in. Or be reminded that sub fast travel for free. I’m the equivalent of forever subbed. I should not have to see this. And the large gold icons showing your subscriber statistics could have just been some type of gold border to my name. Presently everything is too in your face. It breaks immersion, in a game that depends on atmosphere.

Permanent Transdimensional Banking  …  As a packrat I am either going to love the convenience of this item, or hate that it encourages me to keep even more junk.  :P

Welp, the changes are out. In theory the actual membership itself is great but the ugly, tacky, desperate reality is that the whole interface is so intrusive and gaudy even PWE would take a step back. Your sub status is shoved in everyone’s face constantly, most of all your own. Chat spam with (30% Memership Bonus) every time you recieve ANYTHING in game like some xp for killing a zombie. Gold outlines on your team window slot, a big stupid ugly icon next to your name which you can’t turn off. A window blaring membership benefits that takes up almost the whole screen when you log in. If you don’t sub you’re sconstantly reminded that you’re a lower class citizen. If you do sub you’re constantly reminded of what a scrub you’d be if you stopped. If you’re a GM and therefore can’t even change your sub status you STILL get all of this in your face.

Funcom, what in the name of all the eldritch gods are you doing with this? Your remaining high-brow classiness is evaporating. Don’t ruin some good changes by dressing them up in such an obnoxious manner with no way of turning that shit off!

Even though I got the GM at launch, I have thrown additional money at them here and there. Totally worth it.

ZenDadaist Zardoz1972 I’m pretty sure if you google FunCom frozen accounts, you’ll find quite a few interesting, if not downright criminal, stories.

Project54 EBreezy No, unfortunately. I’m the poster girl for bad, young adult decisions. Even though I am fixing a lot of the damage now,  I’m unable to get one. I’m working toward getting a secured card as soon as possible so I could have credit for that very reason – and to buy a house soon! Believe me, it frustrating when things like this come up. But, that’ life.

Do you not have a credit card or a rainy day fund? Used properly and responsibly (i.e. not building up a debt) a credit card can give you 50 days interest free for those times where you want or need something now but need a few weeks to sort the funds out. I can’t imagine how i’d manage without when those unexpected big bills come along. It smooths thing out so you can spread those big bills out over several weeks than the day it happens.

GDC 2021: Accessibility in gaming means innovation for everyone