Daum EU has just announced a new class pair will join the Black Desert sandbox next week: The Musa and Maehwa. You might recognize them as the Blader and Plum from the Korean version.

The Musa is a melee class that relies on high speed and fast reactions to stay ahead of the enemy. With incredible mobility and a specialty for AoE-focused attacks, the Musa excels in small-scale PvP. The Musa is at its best when dashing across the battlefield to dispatch enemies with powerful AoE attacks, but each uncalculated move can be deadly due to his lower defense.

The Maehwa is the female counterpart to the Musa class and boasts similar stats. Like the Musa, the Maehwa fights with a Blade and Short Bow while quickly moving about the battlefield to avoid enemy attacks. While both classes are melee oriented, the Short Bow affords the Musa and Maehwa a selection of ranged attacks used to knock down targets and provide an opening to deliver close quarters attacks. Unlike the Musa, the Maehwa specializes in one-on-one combat with the impressive ability to lock down single targets for an extended amount of time.

Both become playable here in the west on April 20th. Check out the videos and screenshots below!

“Musa (무사/武士) is a term that describes a soldier that practices martial arts (무예/武藝). In case someone wasn’t aware, martial arts is not limited to bare-handed fighting that is prevalent in movies, and there are many different types. It does not specifically mention a blade in the title, and calling it a blader, while it makes it easy for an English-speaker to understand, doesn’t do it any justice and gives a misconception (especially since it is receiving a glaive/polearm (월도) as an awakening weapon).
Maehwa (매화) literal translation is Plum blossom (the tree). The name is a symbolism for the character, rather than defining a role. While it is open to interpretation, we can imagine it has to do with capturing the elegance and the feminine charms of the plum blossom. The problem with calling it a plum, the fruit (자두), is that it gives a completely different image. Just copy and paste the two words 매화 and 자두, then see for yourself.”
“Maehwa means “Plum Flower”, and is almost definitely a reference to flower-warriors in Korea’s history including Hwarang (“Flowering Knights”, a group of male warriors) and Wonhwa (“Original Flowers” a group of female warriors.). “Hwa” has the specific connotation of someone who has refined a skill in Korean, like a flower originally starts as a bud and takes time to “bloom”.”

Leilonii Sorenthaz Darthbawl They /can’t/ call it Samurai OR Blade Master because Ninja Awakening is -that- exactly. A samurai that wields 5 blades at once. It doesn’t make sense either since the Musa awakening is a Glaive.

Sorenthaz Musa=/= Samurai. Musa is a korean warrior that knows martial arts. Both Maewha and Musa are representations of the Flowering Knights, Hwarang. 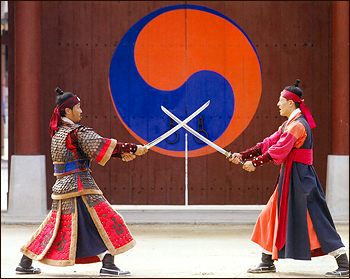 Vellik The unfortunate truth is that the more vocal bunch is always the more toxic. The guys you see on message boards, flooding the general chat, or that wont shut up in Team Speak are usually the worst ones. In this case, they are also the ones who went the extra mile to play the KR version long ago and feel superior because of it. The majority of the community is fine, IMO.

I’m still in “f*** you mode” with Daum about once saying that they wouldn’t release content in the same order as in the KR version, which got my hopes up about seeing Ninja sooner rather than later, as they continue to release content in the same order as the KR version. I’m salty enough about this to f*** up your blood pressure by just looking at you.

Traxius grassisalwaysgreener joshua12jd The only thing they can likely bring up is the ability to put houses down in the open world. BDO didn’t do that for a very good reason as archeage showed that non instanced housing just leads to massive issues….

joshua12jd RagnarTheDrunk Not really a rumor as unless they are pulling a class out of thin air their road map would lead there since they said 2 more classes in may.

Shamancard  Not zerg skill spam festival yet, seems they have issues with servers.

Sorenthaz Darthbawl I agree and I posted that on the MMORPG reddit and got downvoted. Trying to Google the Musa class name didn’t get me anything remotely Korean. What it did get me was a lot of Muslim stuff because apparently it’s a very common name and term there. That is not what I see when I look at an Asian sword master class. Just call it a damn Samurai or Blade Master or whatever. It makes far more sense than a word that Western gamers will not understand. Most don’t follow Korean things at all and will be very confused like I was when I clicked on the Youtube video and got a bunch of really weird “suggested videos” just based on the name. I don’t like it.

joshua12jd whiskysour customize the ranger to a guy, its very possible

The Daily Grind: What sort of monster do you love to...