Gamers tend to harp on game companies for the very public mistakes they make. While most of the criticism is clearly deserved, occasionally a studio will learn from the misstep, listen to the playerbase, and come up with a solution that both meets the financial needs of the studio and the expectations of the players.

END_OF_DOCUMENT_TOKEN_TO_BE_REPLACED
I count the World of Warships dockyard events as an example of such a compromise between those who play the game and those who design the game. Let me explain.

It all started around this time last year, during the new year’s celebration event. I had been playing World of Warships for several months, so I was just becoming familiar with special events and celebrations. For this particular new year’s event, the main attraction was to be the instruction of the dockyard, a cool little addition that allowed players to progress through various phases of shipbuilding by reaching certain objectives (challenges) within the game. The dockyard displayed a ship being built in dry-dock, and the animations progressed as the objectives were met.

To top off the entire celebration, Wargaming claimed that the end result of the dockyard event would produce a top tier American cruiser (the Puerto Rico) that the player would then have in his or her inventory to use in matches and battles. Less patient players could “buy” construction phases in the cash shop to speed up the shipbuilding process.

As players began to get into the event, however, it became clear that the objectives set forth for the dockyard event would be unattainable within the allotted timeframe. That was true even assuming that days of grinding for the ship would not be missed for such inconveniences as holiday gatherings and travel. (Remember holiday gatherings? Ah, those were the days!)

Very quickly, players figured out that they were being suckered into a grind that they would eventually end up paying to finish. After all, once you’ve invested that much time toward a goal, human psychology compels us to power through to the end, regardless of the price. In business, this is called the sunk cost dilemma. It truly is a dilemma: If you wanted to simply skip all of the nonsense and buy the entire ship (through phases) on day 1, it would set you back a cool $230.00. Do I go ahead and pay the money to finish the ship even though I’m angry at the company for trapping me into spending it, or do I quit and let my holiday grind go to waste?

As you can imagine, this event was not a big hit with World of Warships players. To this day, if you type “World of Warships Puerto Rico” into the Google search bar, “disaster” is one of the autocomplete choices, along with “apology” and “refund.” Such an interesting coincidence that the letters PR stand for both Puerto Rico and Public Relations, since PR disaster easily applied to both!

Many longtime players who had been on edge since the aircraft carrier re-work decided that this event was the final straw and walked away for good. It wasn’t just the obvious manipulative psychology being employed that caused players to get upset. Previous winter holiday events had been much more generous in the form of heavily discounted – even free – premium ships. While a game company can’t be expected to lavish loads of free stuff on the playerbase, there was a history of holiday generosity that was not only betrayed but turned into a price-gouging experience. Instead of being given a holiday gift, the playerbase felt as if Wargaming was trying to trick them into paying for their own Christmas presents.

To Wargaming’s credit, the company tried to issue an apology, kind of, though the apology was more about how it mishandled communicating the event and therefore skewed people’s expectations of the attainability of the Puerto Rico. And any attempt at goodwill was subsequently negated as Wargaming proceeded to include a spreadsheet justifying how the Puerto Rico could potentially be earned within the allotted time period. It felt kind of like an “I’m sorry you were offended, but you’re still wrong” apology. I’m willing to cut the team a little slack on this one since it’s a Russian company and it’s possible some nuance is lost in the translation, but it still stung.

Perhaps an admission of fault can best be seen in how Wargaming altered the dockyard event for the summer of 2020. It’s fair to say that a bulk of the playerbase was enthusiastic about watching the ship be built in drydock. (The art department at Wargaming is constantly awarded high marks even as other aspects of the game are criticized.)

Around the fourth of July, it ran a second event utilizing the dockyard mechanic. As Wargaming seems to have a knack for running these kinds of events while I’m traveling for the holidays, I missed seven days of grinding and did not anticipate making much progress toward the end goal, a tier 8 German battleship called Odin. The communication about the event was much improved, as Wargaming made it abundantly clear that players would not be able to obtain the Odin for free. In fact, even if all objectives were complete, the final two stages of construction would need to be purchased with doubloons (cash store currency).

While some players still balked at the notion of having to pay, most viewed it as a huge improvement over the Puerto Rico event. At least Wargaming was being up-front about the cost instead of trying to entice players to start a grind under the false assumption that the ship could be obtained for free. Many players would happily grind the objectives and view the Odin as a ship that had been discounted for the event. The amount of the discount was dependent upon how much of the grind the player could complete. Since Wargaming had a guaranteed income from the final two phases of construction, they were also able to design objectives that were more attainable.

Even while missing seven days of the event, I was still able to complete at least half of the objectives with little effort. For my grind, I was awarded the “halfway” ship, the prize that players received when they completed half of the Odin directives, the Admiral Graf Spee. 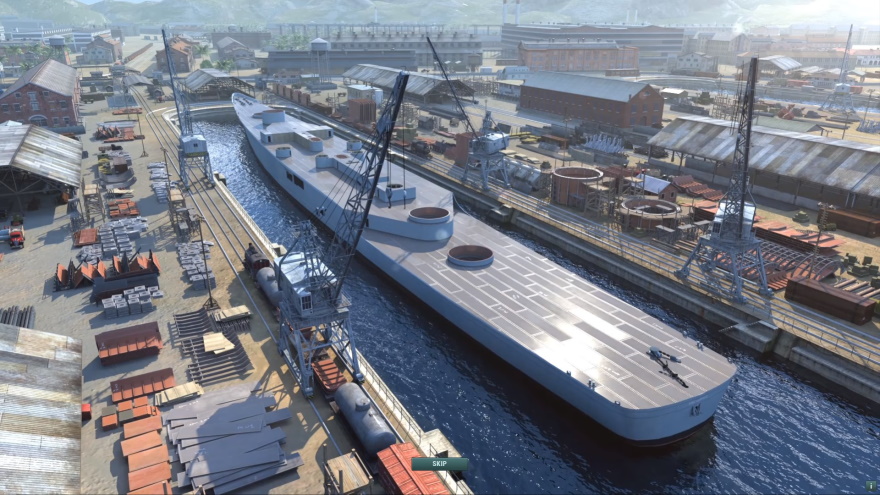 The third dockyard drew from much of the success of the Odin event. In the third dockyard, the grand prize was a tier 8 US heavy cruiser Anchorage. Again, Wargaming made it clear that at least two of the construction stages would need to be purchased and provided an option for those two stages to be purchased up-front for a heavy discount. If players were confident they were going to complete all of the directives, they could conceivably purchase the Anchorage for the doubloon equivalent of about $8 US.

I, having never fully participated in a dockyard, was not so confident in my abilities, so I decided to try to complete as many of the objectives as possible and purchase the remaining stages only if I could get the cost down to a reasonable amount. I found the objectives to be obtainable with some intermediate level of effort (and plenty of different ships) and would have probably benefitted from the offer to purchase the discounted stages had I known.

As it turned out, I was able to grind through 17 construction phases but decided to go ahead and purchase the remaining three, as doing so would also unlock the research bureau for me, which under normal circumstances would require me to obtain five tech-tree tier 10 ships (I have only one so far). It ended up costing me close to $30 US for the Anchorage and research bureau. I’m happy to say that I both enjoyed the event and feel as if I got my money’s worth.

It’s fair to say that the original implementation of the World of Warships dockyard event was rife with issues, both in communication and execution. But after initially being somewhat defensive and combative toward the playerbase, Wargaming clearly resolved to pick up the pieces, move forward, and improve the event. The last two dockyard events were marked improvements over the original Puerto Rico event and even reached the point of being enjoyable. Let’s hope WoWS is able to continue the trend, as the next dockyard event, the one-year anniversary of the Puerto Rico disaster, is right around the corner.