Happy Halloween! Or if you prefer, Happy Scare-Related Holidays featuring the Stylings of Ed Casbar and His Electric Teeth. It’d be the best of holidays if most people didn’t have a prejudice against a middle-aged guy going trick-or-treating. Hey, we adults need sugar fixes too, you know! And just because you don’t understand my saucy Night Elf cosplay outfit doesn’t mean it’s less valid than the tots with Iron Man masks.

At least the online world is more open to adults and youth alike looking for some freaky excursions, which is why I love bouncing around between MMOs looking for a little haunted mansion action. Let’s take a quick tour through 10 virtual haunted houses that delight in the darker side of the holiday season.

In a game that’s full of haunted everythings — castles, laboratories, archaeological digs, bridges, amusement parks — it’s the Franklin Mansion that stands out as the “classic” haunted house, albeit one with a twist.

It looks the part, from its foreboding presence looming right off the road to the actual ghosts that roam its interior. Yet it’s the cats that are actually scarier (especially around Halloween), and one must ask some hard questions about why Eleanor sticks around as she does. This house is also notable for the fact that you get to travel back in time to see how it became haunted, which is a first at least for me.

Until Disney gets a whiff of this trademark copyright and sends an army of lawyers to shut it down, this Haunted Mansion is open for the enjoyment of all. Visitors to the Loping Plains might stumble upon a graveyard, black out, and awaken in this house, where several clues and puzzles must be unraveled before the abode can be cleansed of an evil presence. Note: There are no grim grinning ghosts, so let’s maintain plausible deniability when Mickey shows up.

If I could make a game location a real place for the purpose of throwing a Halloween party, Karazhan would be it. It takes the haunted castle motif and does its utmost with it, ranging from a spectral banquet to an antagonistic opera hall. Plus, its music is just creeptacular!

The tenor and emotional delivery of Japanese words typically escapes me, so I don’t see the word “Haukke” (is it a name? A type of cheese? A chocobo reality show?) as being inherently sinister. But visiting it, this manor is a full-on haunted dungeon featuring three levels of heart-stopping action.

Apparently there was some crazy lady who lived there and liked to bathe in the blood of innocence as a beauty regimen, which sounds a little familiar to me. Oh, I’m not saying Bree does that! Not at all! Why would you ask? 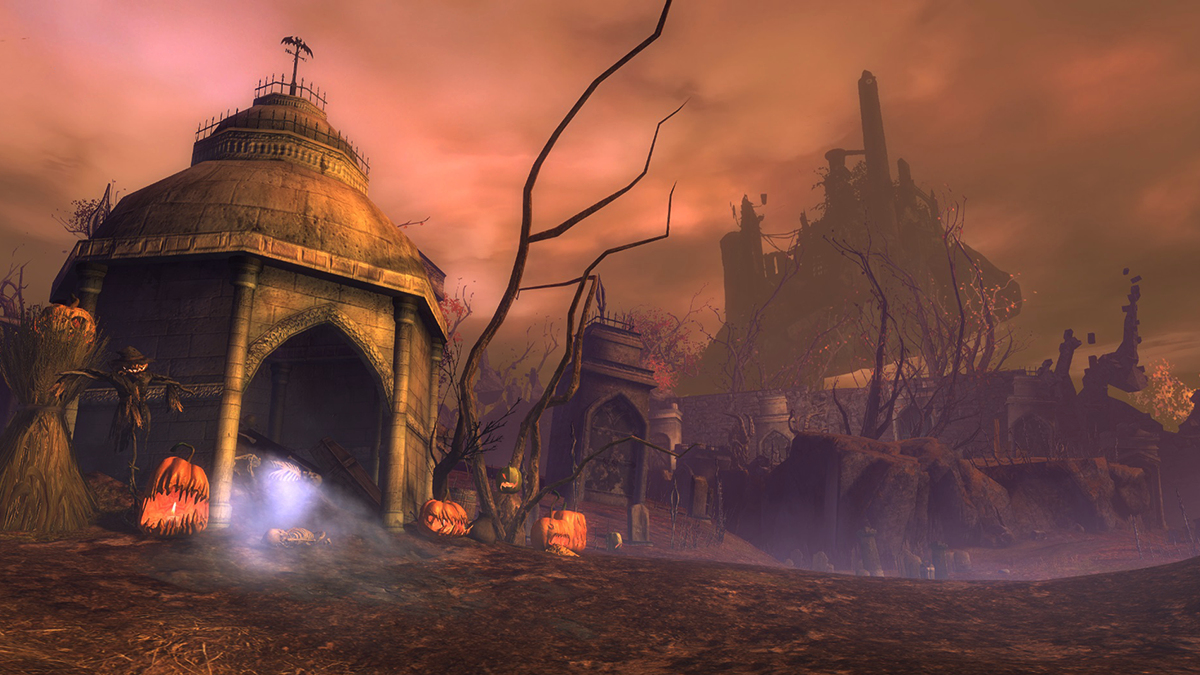 If you like your haunted houses a little less “house” and a lot more “outside” with “other people,” then you’re going to want to “step” into this “labyrinth.”

[Pause as I receive a cease-and-desist for the overuse of quotes.]

Sorry about that. In any case, the Shadow Labyrinth is drenched in delightful Halloween vibes while offering players a playground in which to romp and get all sorts of candy and treats.

Mad scientists always seem to live in giant houses all by their lonesome. You just don’t get a lot of doomsday madmen sharing a loft in Soho with three college bachelors, is all I’m saying. Happily, with the return of this MMO, we’re able to visit Dr. Kane every October and bug him by tracking in dirt and blasting all of his zombies with our radiation beams and sonic shockwaves. That makes a mess not even a haunted Roomba can clean.

Of all of the haunted houses I’ve seen in MMOs, this is by far my favorite. Why? For starters, this is Bilbo’s gift to the hobbit community in which he left a functional haunted house to freak out the locals. Plus it’s got hobbit ghosts, things that pop out at you, secret passages, and a goofy spirit that makes me think of the best funhouses of my childhood.

This does make me wonder if having superheroes wander through haunted houses are a good idea. I say this because as a non-powered individual myself, I’m prone to having all sorts of strong reactions when I’m scared, such as punching, screaming, and forehead-slamming. What happens when you scare a superhero who can melt steel with his eyes or kick through time? No insurance company is going to cover that enterprise.

A good and proper haunted house has to look the part, and the House of Thule provides a perfect example of this. It’s large, it’s somewhat decrepit, and it has arched rooftops and crumbling stones. It’s like prime real estate for the Ghostbusters’ worst nightmares. I find comfort in this familiar look because it’s almost way more scary to have a modern-looking facade be the portal to poltergeist city.

I can attest that this game has several creepy missions, although the jaunt aboard the Warwick was the worst for me. You board this ship and find several dead bodies and mysterious logs, all while coming into contact with ghost-like creatures that change the room to an eerie blue. Turns out this has to do with technobabble phasing, but it’s as close to a haunted ship in space that I’ve seen. Good thing space suits have bladder bags!