Feel free to contemplate all of that as we liveblog the panel about exactly this! With fewer deeply recursive questions, we promise. You can enjoy taking part in the running liveblog in the comments, or you can catch up on any and all major reveals summarized just below. So tell us what you want, what you really really want… wait, that’s something different. Never mind. 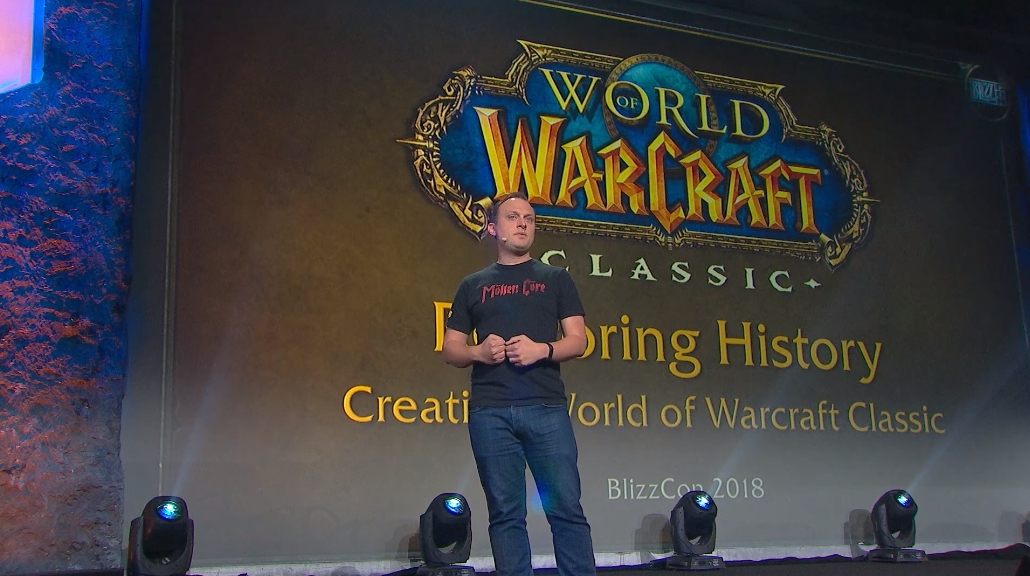 4:30 Here we go! Ion Hazzikostas introducing the panel and Omar Gonzalez up first.

4:35 So video game development is hard. Gonzalez basically is laying the foundation for explaining how WoW is put together from its component pieces, by way of explaining why truly restoring WoW (the right way) is not some simple thing. Blizzard basically spliced together a functional version of 1.12 based on old art assets and data cribbed from backups of backups of backups. 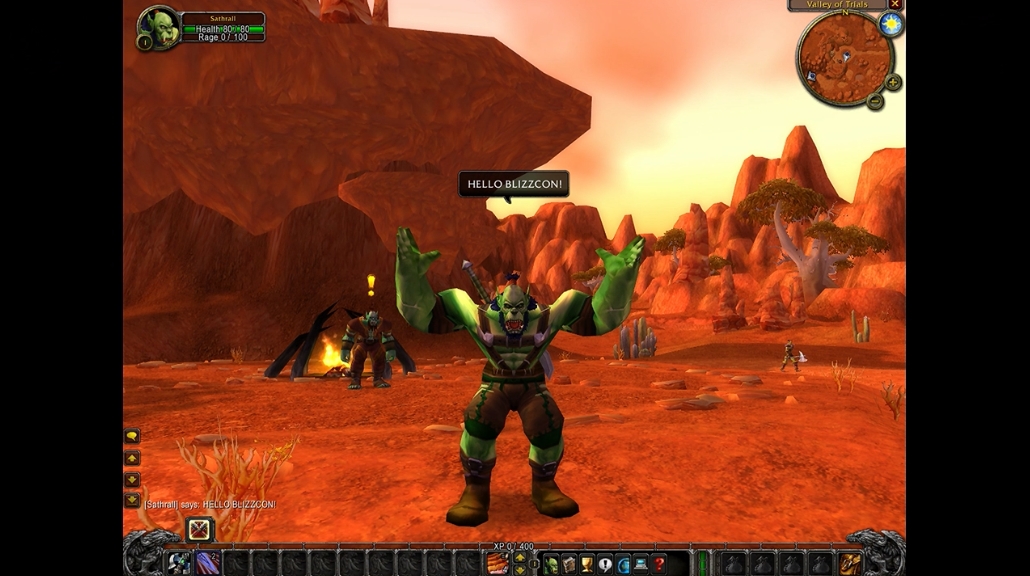 That internal version wasn’t up to snuff: It didn’t run on current cloud servers, didn’t work on Battle.net; it had no content delivery pipeline, no login servers, no customer support, and so on. That required splicing together old and new assets to make something that would function in the modern era… 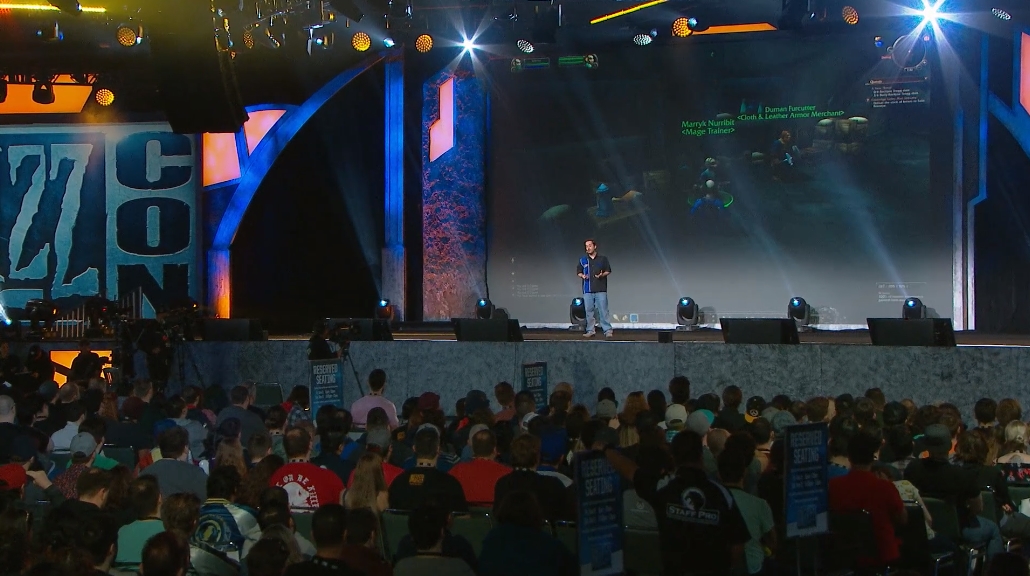 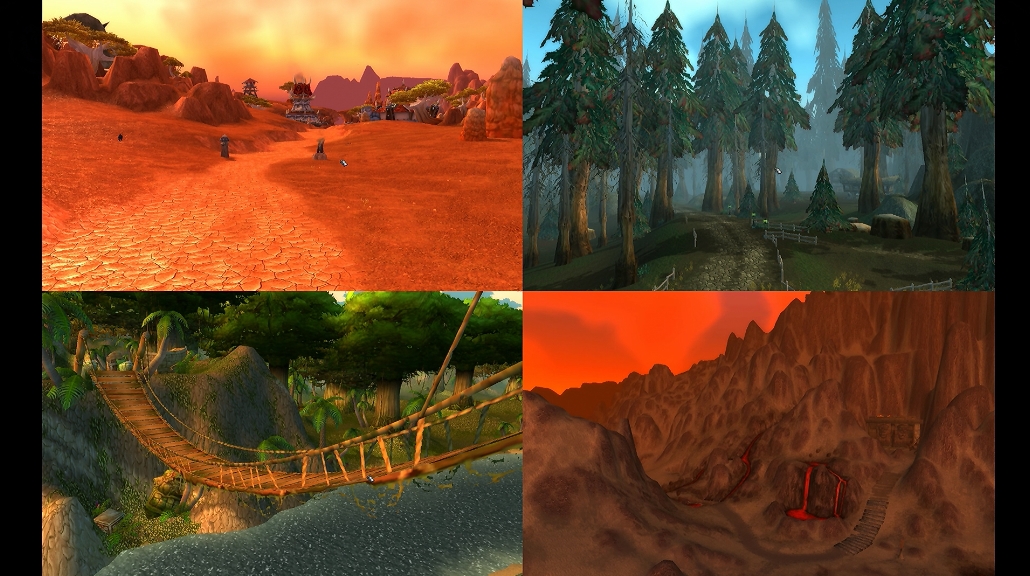 4:47 … Which isn’t exactly easy either, Brian Birmingham explains. Specific tools were needed to read the old terrain data and turn it into something modern, fixing, for example, the funky dam water. 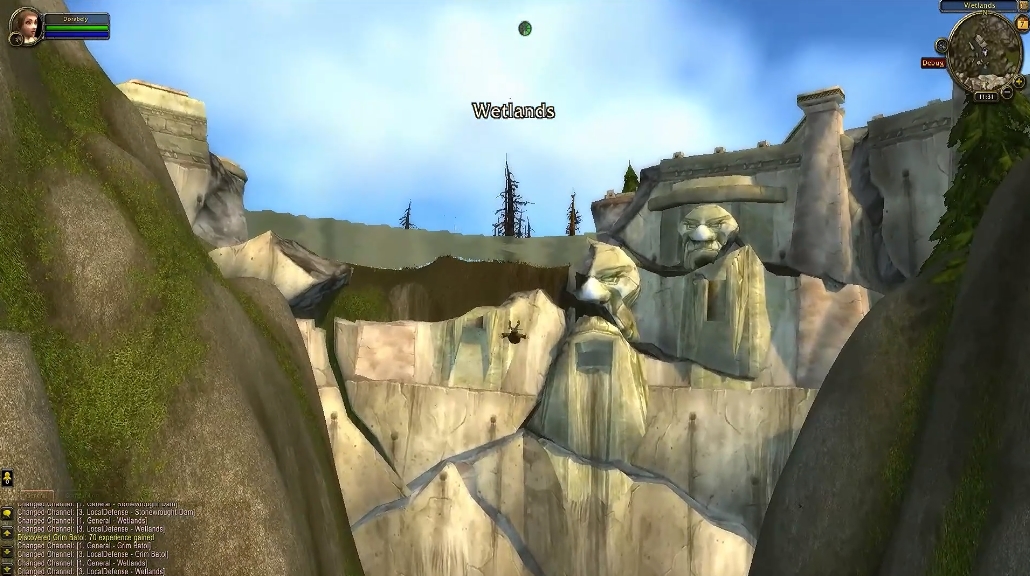 4:54 Discussion here of code that needed to be brought back specifically because it refers to mechanics that no longer exist, like hunter ammo, pet feeding, weapon skills, and so on. 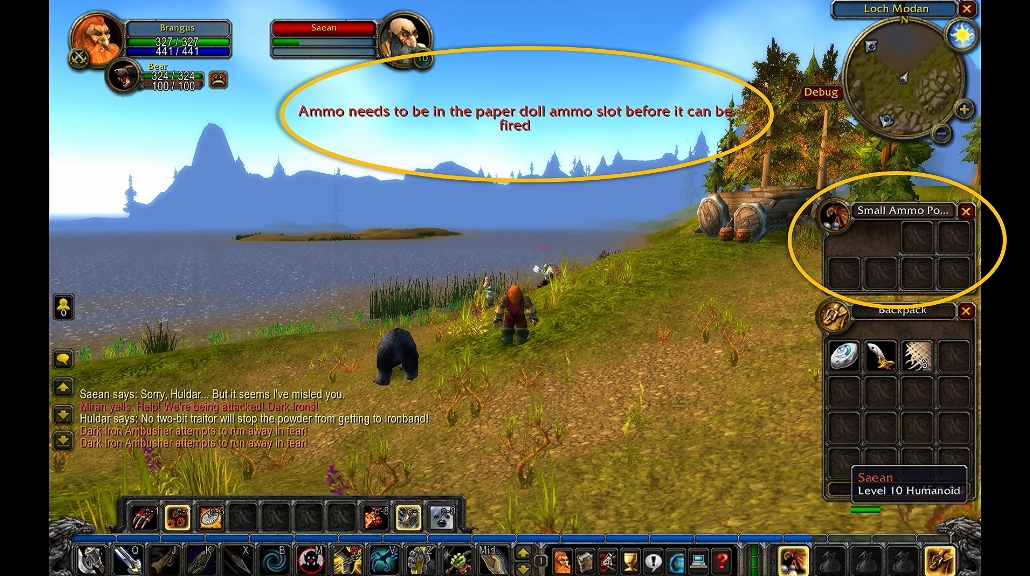 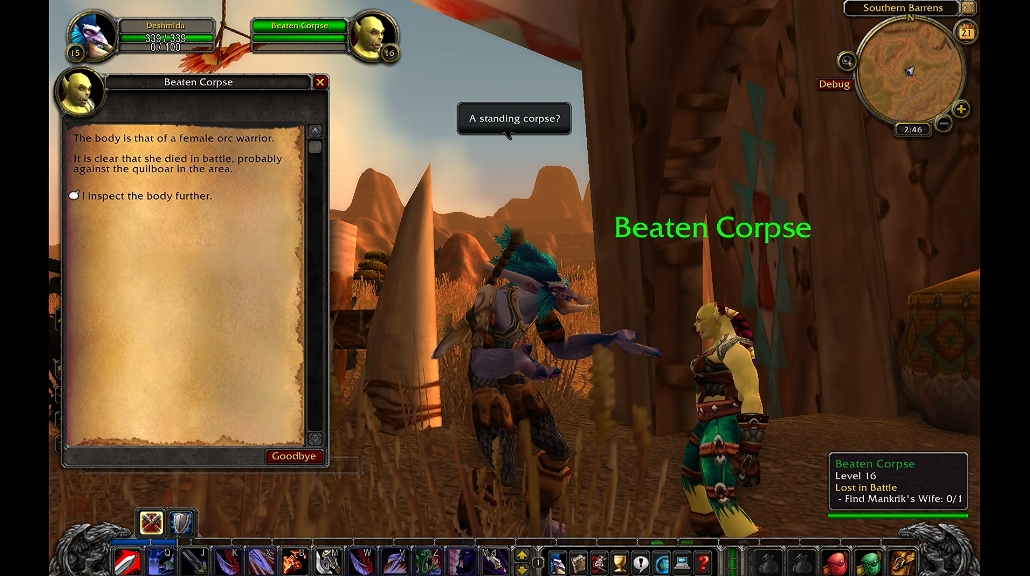 Birmingham won’t promise “pixel-perfect” replication, but he says the UI is getting pretty close. 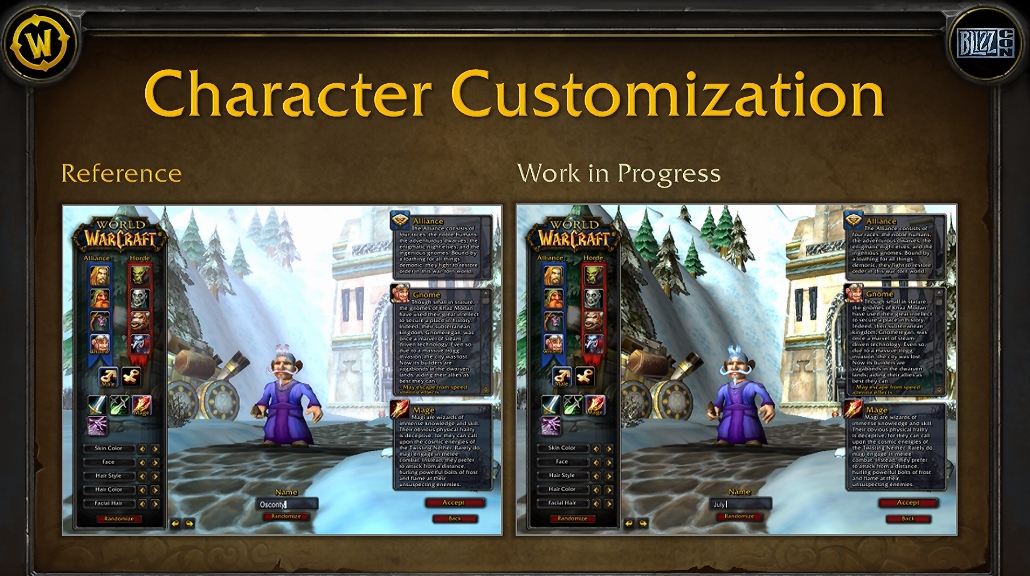 He also lays out the case for why it was easier to build WoW Classic anew based on the original rather than using the original as a base. 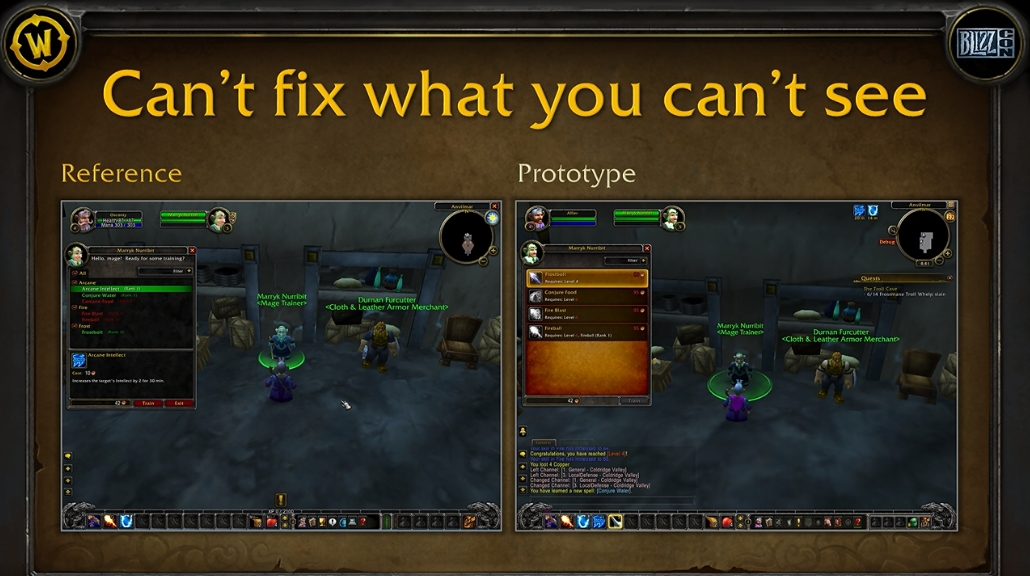 5:00 Hazzikostas is back to talk about authenticity and design philosophy, how Blizzard is focused on pure rebuilding the mechanics and social experience rather than substituting “modern judgement.” 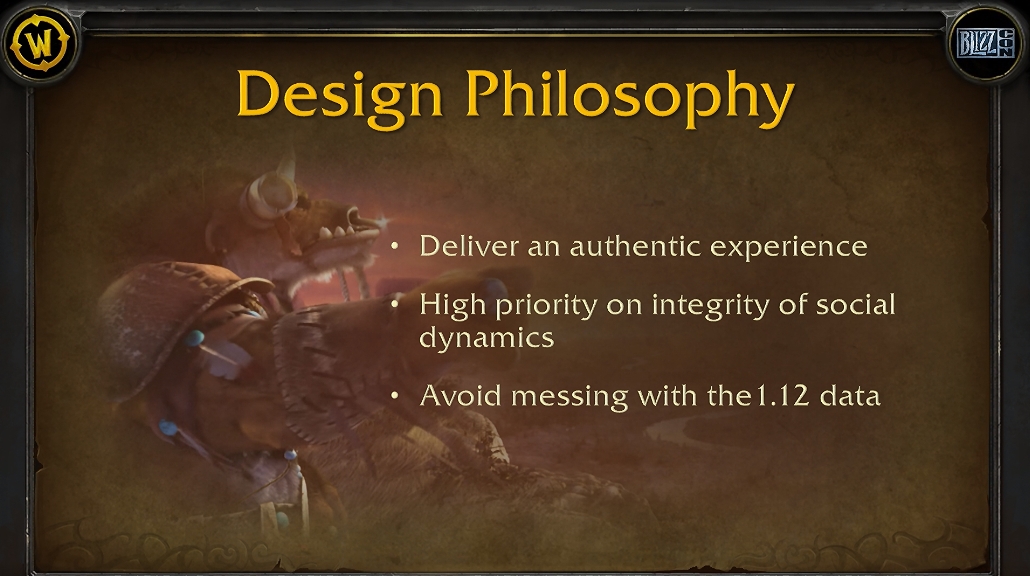 That includes things like not bringing the dungeon finder into Classic, or cross-realm grouping stuff. No flying either. And no achievements. No unified auction houses.

Those were the easy decisions. Apparently, some decisions are much harder: For example, the debuff limit. The original design, Hazzikostas says, wasn’t great game design – it was a technical limitation – but the team decided to go with the 16-debuff limit anyway to avoid having unintended effects on balance. There’s not going to be instant mail either. Old rogue energy regen is coming back too.

The UI, however, is definitely getting tweaks because it won’t have any impact on balance or social interaction. Loot trading is happening too (sorry ninja-looters). 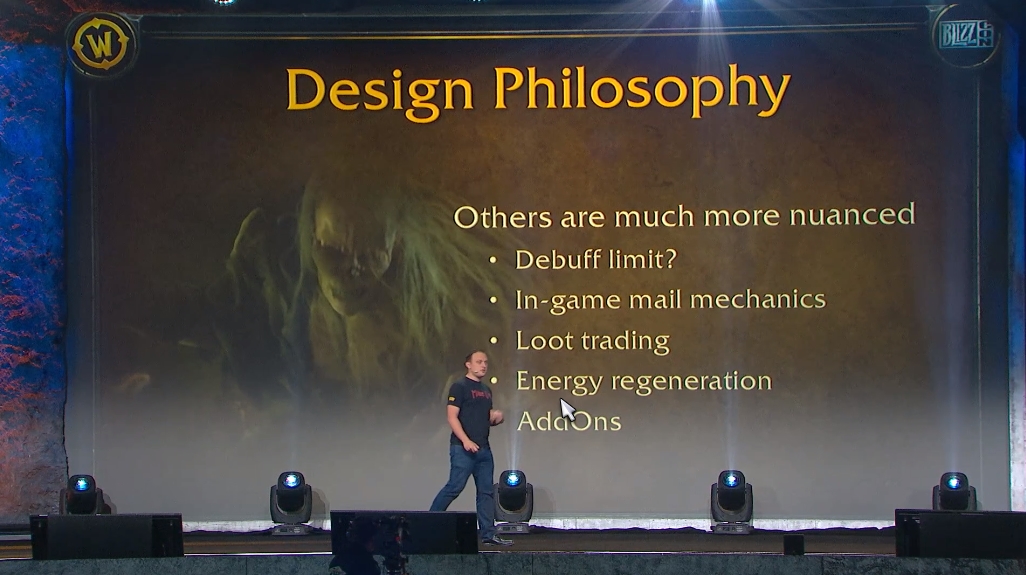 As for addons, some functions – like skill rotation addons and social addons – won’t function.

5:14 Blizzard is indeed planning staged content unlocks, starting with 1.12, roughly where WoW was in the spring 2005, with Dire Maul, Onyxia, Molten Core.

Looks to me that they know what they’re doing. Basically taking the private server experience and making it legit, which is pretty much exactly what they should do.
I’ll be there at launch!
/thumbsup

From many of the comments I have see from the author of this article in these forums I can safely say he doesn’t get why people want a classic server and what they want from it .

The lack of a dungeon finder is integral to healthy world pvp on pvp servers and on pve servers it meant if you acted in a friendly social manner you would be more likely to make friends who you could do those dungeons with . I think if I recall it also made Warlocks more important ( or was it mages ? ) because they had the skill to summon other characters with the help of two other people . Its these little things that made vanilla so interesting . A dungeon finder for me at least would be a deal breaker I would go straight back to a private server .

I am glad you can’t build new add ons for the game it would detract from the classic experience .

I am not sure if Auction houses were unified or not in vanilla WoW I has vague recollections that they were not . Anyway most people on the Alliance side used them in Iron Forge or Stormwind it wasn’t a problem all you had to do was take a short train ride .

Being a well geared character did earn respect in the vanilla game there were some well known players in the game and some well known raiding guilds on the server I was on . Personally not being a raider myself it really didn’t matter much to me one way or another but I remember friends of mine talking about them . You really had to work at getting your gear back then and people who did got noticed . Maybe you played on a very low population server ?

Perhaps these classic servers are just not for you and maybe you would be better served by staying on the live ones ? There is nothing wrong in that , personally if I am going to subscribe again for the classic servers I will probably play the live ones as well even if its just to do some pvp . I do hope people like yourself won’t convince Blizzard that it is a good idea to streamline the classic servers though by including dungeon finders because essentially that would defeat the purpose .

Overall some pretty interesting insight into how they got it all working. Hopefully they keep the content paced out long enough to where folks get plenty of time to get to 60 and do MC/etc. before feeling pressed to move onto the other stuff.

Also will be interesting to see how they handle stuff like the Ahn Qiraj Opening and first Scourge Invasion.

Loot trading …. don’t think it is an “authentic experience” at all.

I’m sure the ninjas will love no loot trading.

Looks pretty good to me.

Any word on Pandaren? Or the moose?

Did you come here just to pick a fight? ;)

I found the classic servers to be much less laggy and smother than pirate servers, no unwanted jerkyness

I loved it! I had so much fun playing, even though stuck in Westfall. The panel was great too, they really seem to “get” it.

Thanks, Eliot and Bree!

See folks back here for the Q&A.

Dauntless introduces a new cell and adjusts the reward cache in...