Did not see this one coming, but in retrospect, it makes sense: The Elder Scrolls Blades has apparently just launched into early access on Android in the middle of Bethsoft’s Morrowind anniversary celebrations.

The massive mobile not-yet-multiplayer sandbox and its first-person exploration and combat experience were announced at last year’s E3 and were intended to roll out this past fall, but the game was delayed into 2019. Just a few weeks ago, Bethsoft said it would be sending invitations on a “rolling basis,” but multiple MOP writers in the US have been able to install the game directly from the Android store as of this afternoon, although some have been unable to log in without invites. (We haven’t directly tested iOS, but it looks like the Apple Store page still has a March 28th date on it.)

Two of our writers have checked it out since the original reveal last summer: While Andrew thought the demo was fairly limited but still intriguing, Larry called it the best mobile game he’d ever played. Have fun in there, folks!

So this is insane, but Blades just launched on the Google Play store out of the blue. You may be able to play it right now #TES25:
https://t.co/pAOrcEtlgu pic.twitter.com/XFt9nMixPW

As part of our #TES25 celebration, we're excited to announce that The Elder Scrolls: #Blades is officially in Early Access!

Ready to play? We're inviting players in waves, so make sure to keep an eye on your email for the invite.

Here’s the screen that pops up if you’re not yet eligible: 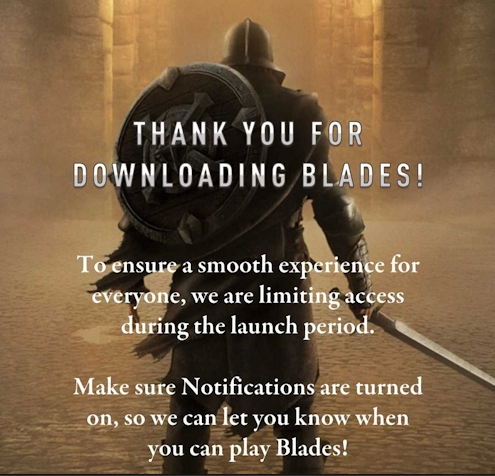