I don’t usually report on mobile games, but I do play quite a few of them. Star Wars: Galaxy of Heroes, Mario Run, and Pokemon Go currently sit on my phone. And I enjoy them to varying degrees. Pokemon Go is my current favorite. It’s not because there is awesome gameplay or innovative mechanics, but it does give me a reason to get out of my house and walk around the park every other day or so. There is one more game that I have to add to my phone when it releases later this year.

At the top of the Hard Rock Cafe in Seattle, WA, Bethesda demonstrated Elder Scrolls: Blades for the PAX West 2018 crowd. It wasn’t just developers giving a guided tour of the game. The team set up eight iPhone X’s at tables for TES fans to get the grubby paws on. I mean it: Their hands were messy; Bethesda was serving barbeque pulled pork mini-sandwiches, too.

Even on a sauce-smeared screen, I experienced what had to be the best mobile game that I’ve ever played. 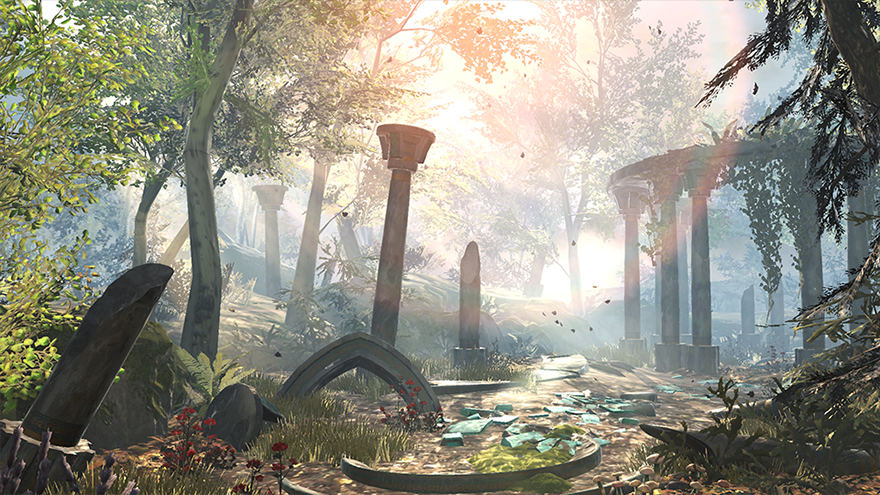 Two reasons I love it

I have never been a huge advocate for mobile games. Most of the ones that I’ve played have been clunky shovelware intended to suck your time and money. I’m looking at you, Candy Crush! I want my wife back! But Blades might actually be the mobile title that kidnaps me. Mind you, this is a game that made me groan audibly when it was announced at E3. I literally wanted nothing to do with this game. And I had to stand on the roof of the Hard Rock Cafe for a good 20 minutes before even mustering the desire to check it out.

The first thing that won me over with Blades was graphic fidelity. It wasn’t just that the scenes looked pretty, the action was smooth, and even on top of a sunny roof, I could see the heavy detail of the Tamriel dungeon. My first concern is related to this: The phones were getting very hot, so hot that the security pads on the back of the phones were melting off. Now, some of the heat was from the direct sunlight, but some was definitely from an overworked graphics processor.

The second and probably most important thing that won me over to Blades were the controls. Many mobile games that attempt to simulate an existing gameplay style the way that Blades attempts to emulate the existing Elder Scrolls games usually fail in execution because they attempt to emulate the D-pad, too. Notice the games that I have on my phone use some other kind of control scheme? Blades circumvents the D-pad trope as well. In order to move forward, you simply click the ground where you want to go. It’s first-person like most Elder Scrolls games, and to turn your head, you simply swipe left or right. 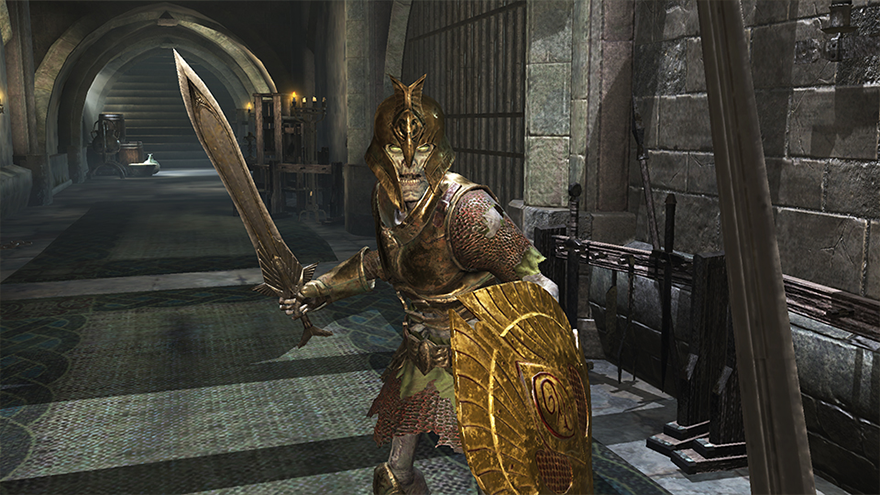 Combat controls fall in line with the fluid controls, too. When engaged in combat, you “charge up” your sword by tapping and holding it. Then releasing the screen swings the sword. You can also click and hold your sword, dragging it over the screen to hit the target from a different angle. It wouldn’t be an Elder Scrolls game, if you couldn’t block enemy attacks, too. When engaged in combat, a shield icon appears in the lower-middle of the screen. Tapping the shield pulls up your shield, or I assume, activates whatever blocking mechanic your weapon has.

There was only one thing that really tipped me off that I was playing a mobile game: I could initiate combat with only one mob at a time. In fact, when combat was initiated by me or the mob I was chasing after, the screen would pop squarely on the enemy and my only focus was him. Now, once combat started, it was smooth, and in fact, I didn’t notice this mechanic until I was attempting to fight more than one enemy at a time. I attempted to swing around to the other enemy and just couldn’t do it. 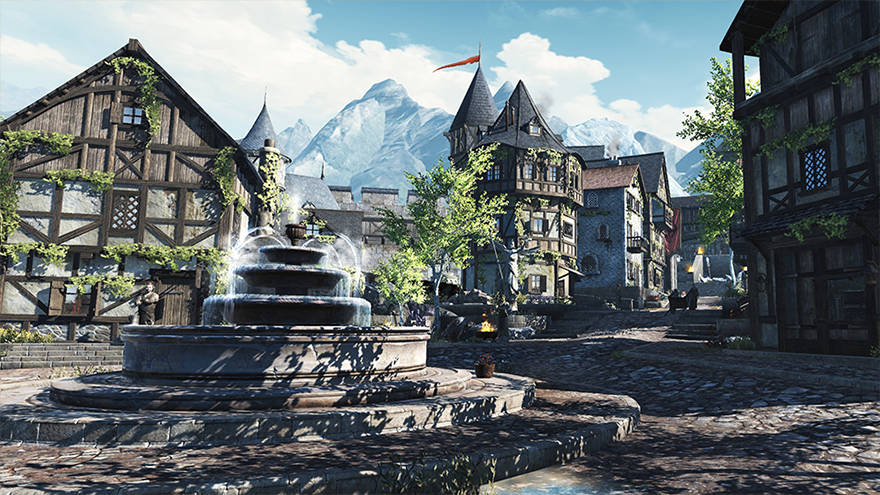 I pre-registered on the PlayStore

I had to end my session with Blades a bit early because I had another appointment to get to, but what I saw absolutely blew me away. I did not have time to finish the dungeon I was playing or experience the other features of the game, like creating my city or PvP combat. But we know that the game looks gorgeous, so even if the customization tools aren’t great, we know that the city will at least look pretty.

As for PvP, I am concerned about those people with slower graphics processors or internet connections because combat is not turn-based. However, if Fortnite can offer fluid and dynamic PvP on a mobile device, there is no reason that Blades can’t do it, too. I will withhold my judgment until I see it in action.

Unfortunately, I’m uncertain whether my Samsung Galaxy S7 can handle the processing power needed to run this game. The S7 is not on the early-access list, but I can preregister on the PlayStore. So I did. It might also be time for me to upgrade anyway. However, if you have a Samsung Galaxy S9, S9+, S8, or S8+ you can play. It’s also compatible with the Pixel 2 and 2XL. On the iPhone/iPad side, your iPhone X, 8 Plus, 8, 7 Plus, and 7 can run it, and you iPad Pro and iPad Air can run it, too.

We don’t have a definite release date; the App Store currently has it set for December 1, 2018, but Bethesda confirmed that the date was just a placeholder and that the current release window is still this fall.

What are your thoughts? Was Blades even on your radar? It really wasn’t on mine. I’d like to read your thoughts in the comments below. Also, if you’re an Elder Scrolls fan, be sure to check out my PAX West 2018 interview and playthrough of Elder Scrolls Online: Murkmire.

Glad to hear this report. I’m really hoping this turns out to be good. A proper mobile action RPG that even supports one-hand play (for the handholds on the bus, you pervs)!

Battery life will never be the same.

Not if I have to get a new device just to play it.

Wow, a positive review of something? is this the right site? right industry? I am confused and pleased! And for mobile no less. Yesterday’s black hole of Change must not be over.

After that, I will certainly check it out! Thank you.

P.S.: I tend to think of trade shows as inefficient; youtube and twitch seem more efficient. But this is an only-at-trade-show moment.

Not on my radar, and I certainly have no intention to drop twice the price of a console to get a phone that can play a game… that money can be far better spent imo. I just have absolutely no reason to need or even want that in a phone.

Now, maybe given tech upgrades I could do something about the old cheap laptop I got on sale that I have been using for years, since it is about out of the ability to play the lower end of new games. That one, though, I would actually use enough to somewhat justify the cost.

Or try NOX or Bluestacks.
Android emulator for PC.

I’m not sure why I would though. I’m pretty sure that, even though this might be an exceptional title on mobile, it won’t really compare so well to things that I can get without bothering to emulate on PC.

Don’t get me wrong, I’m all for better mobile gaming, especially if it isn’t aimed at nickel and dime tactics. I just have the correct setup that I can use a laptop instead, and at that point I have so many options that the minor issues start looking more major in context.

Better than dropping a grand, but… yeah, still don’t see why I’d bother.

I would be not at all surprised if this makes the jump to Windows before long. It’s clearly intended to be an every-platform-possible game like Legends. In fact, I wouldn’t be surprised if the main reason they’re not launching on Windows or Switch right away is just to set expectations so nobody thinks this is supposed to be a game on the same scale as TES6.