END_OF_DOCUMENT_TOKEN_TO_BE_REPLACED
I should preface this article with two things: I got to spend maybe 15 minutes in Murkmire while in a crowded, loud room at the Hard Rock Cafe in Seattle while attending PAX West 2018, and I am already a fan of Elder Scrolls Online, so I don’t have to be sold on the game itself. I already think you should buy ESO now and definitely play at least Morrowind and probably Summerset too. But all that said, I stole the Creative Director Rich Lambert for a few minutes on the roof of the Hard Rock to talk to him about Murkmire.

I have some high expectations for Murkmire because on more than one occasion I have jumped down the rabbit (lizard?) hole that is Argonian lore. I’m not sure what fascinates me so much about Argonians. I don’t play one in the main game, and I am more than a little creeped out by the tales of the Lusty Argonian Maid. However, Argonians have a rich and deep culture that very few — not even Argonians — talk about. Also, although Lambert didn’t mention this, this is an opportunity for the team at ZeniMax Online Studios to actually create much of its own lore because nothing has really been written about the Argonians. 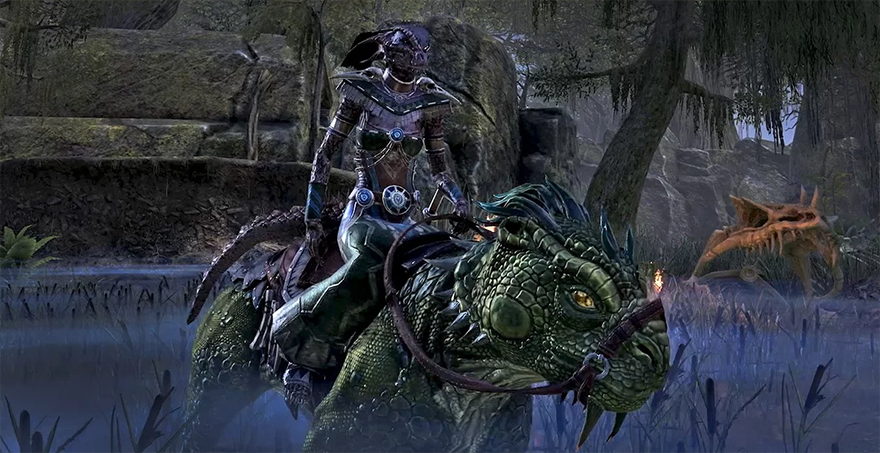 I know many in the roleplay community are not exactly pleased with how ZOS has handled some of the ESO lore because they were told different things in the other Elder Scrolls games. I’m not looking to dive into the specifics at this point, but I did get a chance to talk about lore with Lambert. He said that the lore written in the books from previous games has always been “true to the person who wrote them.” Of course, that means that the actual truth is relative. We need only go back to Elder Scrolls III and the story of how the Tribunal came to power to see how historical accuracy and consistency isn’t a strong point for the characters in the Elder Scrolls series. As a writer, I understand the necessity of keeping a narrative fluid, even if this is a bit of a cop-out.

In Argonian society, this idea of history, culture, and tradition doesn’t exactly exist in their minds. “[The Argonians] live in the now,” Lambert said to me. “They don’t live in the past. So it’s really easy to take [Argonian] relics and what not.” That’s where the Cyrodiil Collections comes in. This group of Imperials wants to preserve Argonian culture, even more so than Argonians do. So the player joins up with them to tomb raid, more or less.

If you’ve played the main game, then you know that we’ve been to Black Marsh before with the Shadowfen zone. That zone only really touches the surface of Argonian culture and lore. So I had to ask how deep do we dive into Argonian culture in Murkmire. Lambert replied, “As you’ve joined with this group, [Cyrodiil Collections], you find out about this really mythical object called the Remanent of Argon.” (At this point I made a noise similar to the noises that Tim Allen used to make in his stand up, but really the only way to express it in text is “???”) “It’s rumored to be this really powerful thing,” Lambert continued. “And the Ayleids tried to get it but failed.”

I could speculate who Argon is and what his “remanent” is, but I will turn it over to you for now. Let me know what you think that’s about in the comments, while I talk about a leaderboard dungeon.

What is a leaderboard dungeon?

Even after talking to Lambert, I still have questions about what a leaderboard dungeon is exactly, but he described like this: “If Maelstrom Arena and DragonStar had a baby – that’s kind of what it would be.” And the way I interpreted that is that the content of Murkmire leaderboard dungeon called Blackrose Prison will be highly competitive and difficult, with some kind of mechanic that will measure how fast players defeat it. I say “fast” because it’s my assumption, but it’s possible that there might be another mechanic that will be measured so that players will end up on the leaderboard.

I have always hoped that some gaming studio would embrace competitive PvE. For the longest time guilds and groups have attempted to be server firsts or speedruns of dungeons and raids. I’m glad to see that ESO is embracing that with Blackrose Prison, and I hope that we continue to see these kinds of additions to not only ESO but other MMORPGs that have this level of difficult content.

Destroying it in PvP

I’m sorry, not sorry, for the tiny pun there, but that is literally what you will be able to do in open world PvP now. I’m not a PvPer in ESO, but it is an exceptionally popular playstyle in the game. The open-world of Cyrodiil is a place or great agony and enjoyment for the PvPers there.

On more than one occasion, I have read or listened to PvPers complain about Alessia bridge. This bridge is a permanent fixture on what is essentially the border between the Aldmiri Dominion and the Ebonheart Pact. (Before someone rips me to shreds, I know that the area is contested and it doesn’t actually belong to either faction.) It’s a strategic chokepoint. And there is a lot of fighting that occurs on this overpass to the Niben River. To mix things up, the developers did something pretty ambitious: They made Alessia Bridge destructible (and reparable, but who really wants to do that?).

Of course, they couldn’t do that to Alessia and not do that to Culotte and Niben Bridges, so those can be destroyed, too. But what about the other borders? Well, as Lambert said and PvP designer Brian Wheeler reiterated later, the six milegates will also be destructible. To prevent the land on the other side of the milegates and bridges from becoming totally inaccessible, the team added goat paths and caves to help facilitate movement between the factional borders.

I watched a panel shortly after spending some time with ZeniMax and Bethesda about console MMOs. I will get into more detail about that panel another time, but what was most striking to me about that panel was that ESO was not represented. Although I was a little offended for them because I’m pretty sure someone from the team would have shown up if asked, I was struck at how influenced by and concerned about specific console things these other developers appeared to be when ESO just doesn’t seem to be worried about them at all, or at least the developers didn’t show any evidence of it, even when I talked with them one on one. ZOS kind of does its own thing and excels at it.

Real-talk time: If you like ESO and everything it has to offer, then there is no real reason to try to sell Murkmire to you; you’re going to be there anyway. If you don’t like ESO, then there is nothing that Murkmire offers that’s going to bring you back. If you are an on-again-off-again player, then there’s a chance you don’t want to come back just yet. Caveat: If you like Argonians (like me) or want to get back into open-world PvP, then maybe now’s the time to jump back it.

I’ve got more from Bethesda a little later this week, including a hands-on demo of Elder Scrolls: Blades, a mobile TES game. Don’t miss any of my other coverage from PAX West 2018 as we roll it out over the next few days!

I have to give ZOS credit. They have done a great job of turning ESO around that only seems to get better (in my eyes). Yes I have some wishes, but what is there now is impressive.

I like the idea of competitive PvE. Leaderboard dungeons sound similar to Blizzard’s Mythic Plus dungeons (in concept), and was something I ended up liking more than I thought.

The others are influenced and concerned because they are chasing the wind. This copy cat mechanic is what destroyed the genre in my eyes to begin with. The original MMORPG concept was built on community, exploration, and discovery. And it was awesome. Then the world got faster and gamers lost patience. ESO’s current trajectory seems to be going back to that concept (in a modern sense) with room for a ton of improvement.

Leaderboards for PVE are not a new thing for ESO. The original Dragonstar Arena in Craglorn has it and the single player Veteran Maelstrom Arena in Wrothgar has one for each class. Then, of course, all the Trials have them. The scoring is a combination of factors not just time taken although that does factor into the calculation.

>I know many in the roleplay community are not exactly pleased with how ZOS has handled some of the ESO lore because they were told different things in the other Elder Scrolls games.

Even their cities are moving…

Taking a break for a bit, but that might be a good time to create a new spanking Argonian Lady, always liked em. One of the most under appreciated races in the game and in eso society. Oddly enough, my character in Summerset, a Wood Elf often wonders why in tarnation she should be helping the stuck up xenophobic High Elves … except to relieve them of their valuables.

Oddly enough, my character in Summerset, a Wood Elf often wonders why in tarnation she should be helping the stuck up xenophobic High Elves … except to relieve them of their valuables.

In-frigging-deed. I am extremely wary to say this, but it gets better and better. Especially those destructible bridges. #melikesoverymuch

Loved the fire breathing lizard mount with the snakes tongue, it will be nice to take my Argonian through Murkmire he’s prepped and ready to go :)

Getting your feet murky in teso’s manure eh 💸there goes your money.