A friend of mine from one of my other hobbies recommended Tree of Savior to me a while back, but I was deep down in other games at the time, so I didn’t do much more than log in and create characters. Since then, there have been a lot of changes introduced, particularly with the Re:Build update in January that reworked the classes, which makes it the perfect destination for this latest round of MMO Cartographer.

I hadn’t been paying attention when that patch happened, so the new Scout base class was new to me. I didn’t even know until I had been playing for a couple of weeks that there was another update planned that just hit a week ago on May 14th, adding new classes and raising the level cap to 420.

This is an isometric game with a cute anime-style graphics in a more muted color palette than a lot of cute MMORPGs. I logged in and looked at my old characters, a Swordsman, an Archer, a Cleric, and a Wizard, all standing around in a room on the character selection screen, just as cute as when I last played. I added a Scout into the mix and headed in to the world for some fun. 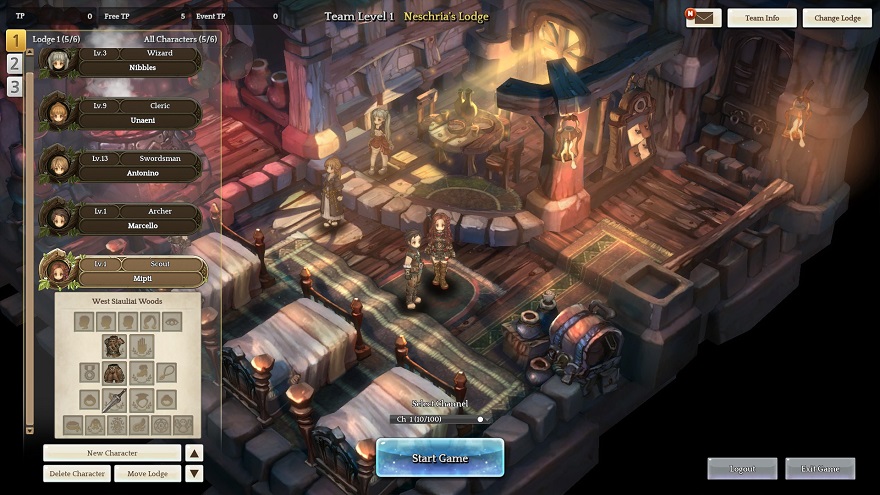 The first thing I encountered was the movement tutorial. I had forgotten that it was an arrow key movement game that makes more use of keyboard than mouse. Luckily, I had upgraded to a new computer since my previous adventure, and now I have a number pad that functions as arrow keys for the purposes of the game; my previous laptop had extra small arrow keys and no number pad, which made playing somewhat frustrating at that time. I adapted to the controls faster than I expected to. The UI isn’t too obnoxious or cluttered, but it does have some oddities – F2 to open inventory, for example.

Having mastered the skill of walking, I moved to the first quest NPC. I hit the space bar to get through the conversation and set off to give the order to assemble. (Incidentally, not reading quest text is a bad habit I picked up that I am trying to drop.) Quest areas and quest NPCs are marked on the map, so it wasn’t too hard to find them. The map also shows you how much of the current zone you have explored. Main quests are marked with gold flags over the NPC’s head, and side quests are blue flags.

My first blue flag quest sent me to go kill a giant kepa, an onion monster. It wasn’t especially impressive or intimidating, just being a large onion, but it was only the first boss I encountered. This game throws big baddies at you periodically from the very beginning, which goes a long way toward making you feel like you’re powerful and really doing something in the world. It’s nice to play a game that doesn’t have you just killing rats and wolves (or small onions and cabbages, in the case of this game) for the first several hours. After completing the quest, you can head back to the quest giver on foot, or you can ever-so-conveniently press backspace to just teleport there.

The first zone contains more tutorial material, often attached to quests. For instance, goddess statues offer your benefits and points of fast travel, depending on which goddess it is, and an NPC sends you to find one. That spawns a giant mushroom named Mushcaria, one of those low-level bosses I just mentioned. By the time you’re done with the first few zones, you’ll have a pretty good grip on what you’re doing. 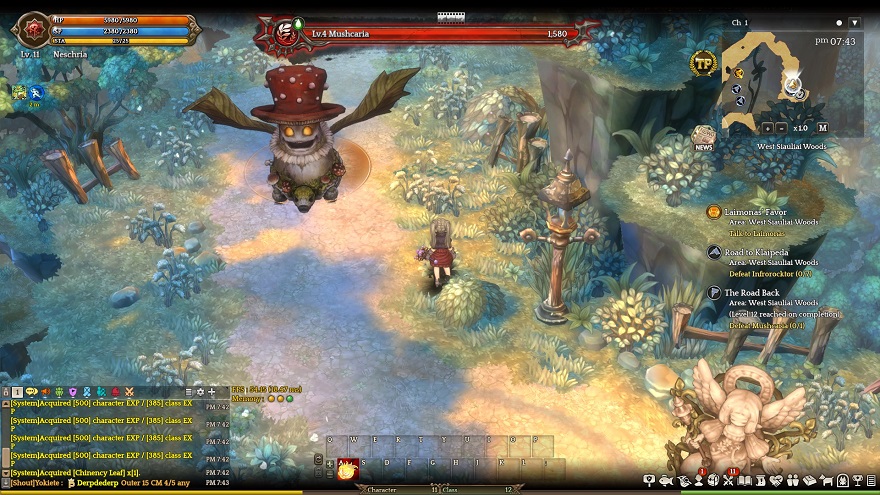 You’ll also probably find yourself ready for your first class advancement too. You have a character level and a class level, and when you reach class level 15, you get to climb onto the first limb of the class tree. You see, this is not a game with 5 classes, as you might think from what you’ve read so far. There are literally dozens of classes.

In fact, each of the base classes has over a dozen subclasses each. You also get a new appearance outfit to go with your new class. My Scout went Outlaw. And that’s only the first class you are adding to your repertoire, with the next coming at 45. You, as a normal, sane person, might want to go do a little research into these classes to see what build you want to go with. I, as a less normal and sane person, based my choice on a quick reading of the class description and the outfit I would get. I’m a no-regrets kind of girl.

You aren’t stuck with what you pick, in any case. You can earn class change points that you can spend to undo your horrible, bad, no good decisions. 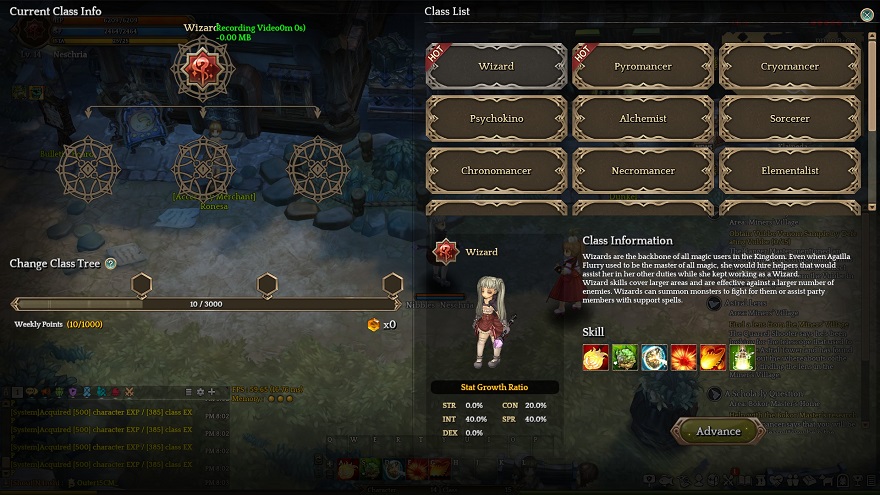 When you finish the first zone, you move onto the city zone of Klaipeda, where you will find vendors, trainers, and, of course, more quests. There are also a lot of player shops offering things like repairs and item identification. This probably won’t be the first time you’ve seen other players, though. It seems like there are plenty of people just starting right now, probably because of all the changes that have happened so far in 2019. Furthermore, people have responded to me when I speak to them, and I have seen people having actual conversations in local chat. There is a guild promotion system that lets you see what guilds are recruiting. (I may join a guild in the near future, but not currently being in one, I can’t give you a first-hand account of the guild systems.)

I wasn’t satisfied to just try out one character, so I also played a Swordsman (who went Retarius at class advancement time), an Archer (who went Ranger), and finally, a Wizard (who went Sorcerer, which is a demon summoning class). As of this writing, my Wizard-Sorcerer is my most advanced character. It’s hard to not get hooked on a class that blows stuff up so very well. I am still basically a newbie, but I am exploring new zones, and I may report back with my further adventures. I have a long way to go to get to 420, but I foresee myself giving it my best effort.