A new automaton of outrageous and awesome ability has arrived! This pint-sized power plant bears skills never seen by human eyes! A far-flung futuristic feat of science, technology, and the will of many! Don’t let its size fool you because it brings to bear abilities unlike anything the adventure reader and comics lover has seen before! Enter a world of mayhem, where the only thing standing between freedom and tyranny is a tiny robot, its powerful support cast, and the guidance of an entire group of its creators! Prepare for mischief! Thrill to its antics! And steer the very course of its fate! It’s… MOP Hunter-Killer Issue 0: First Footsteps in a Future Gone Foul!

So as you can guess, I’m probably gonna have fun writing up this series of columns because I get to pretend I can write comic books — something I haven’t attempted doing in years. Don’t ask about them; they were Rob Liefeld ’90s levels of bad idea. But now, I get to hop back in to City of Heroes with all of you! Allow me to introduce, the MOP Hunter-Killer mk1, or MOPpie for short. Feel free to click the image for a larger view. 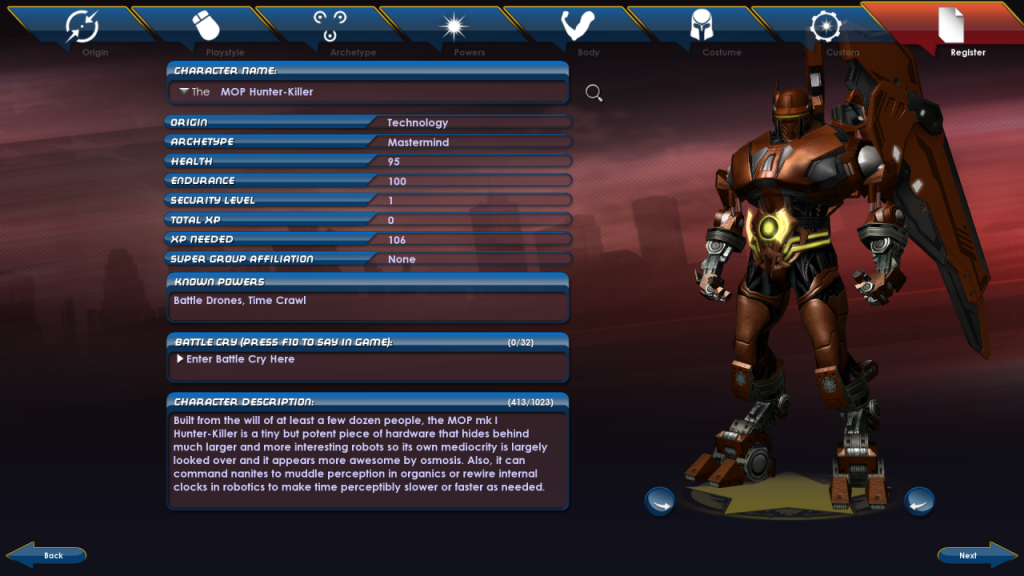 As you can see, MOPpie here is a Robots/Time Mastermind. It was also a chance in the bio for me to kind of poke fun at myself a bit, but mostly I was inspired by the idea that a single fantastical creation would be created by others, so that’s what I went with. Yes, I write headcanon for practically every MMO character I make. No, I’m not going to stop it. I’m a roleplayer, y’all; this is how my brain works.

It has been a very long time since I’ve played a Mastermind, and just about as long since i started in Praetoria. I went ahead and went with the Resistance because I just can’t really bring myself to be on the side of an iron fisted empire. Almost immediately, I was struck with just how barren this area is. I seem to remember not many people liking this starting place in the original game, and it would seem that perhaps holds true for the Homecoming rogue server players. It was a little sad, but it also meant that I could street sweep unhindered so I can get my Masterminding bearings. 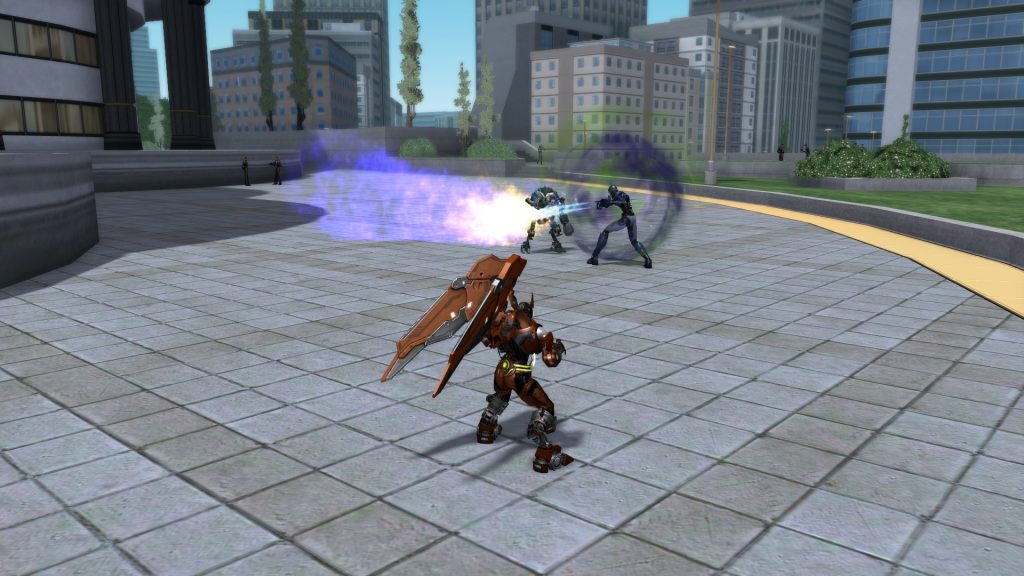 I’m electing to go pure pet control in my power selections, owing to the fact that the few attacks I’m granted in my primary powerset aren’t exactly what I’d call necessary. This also meant, however, that things are slow in terms of time-to-kill. At least in the interim, anyway. Once I got to level 6 and my second pet, things opened up for me a bit more. That also, however, made a lot of my gameplay pretty passive. Especially with the Time Manipulation secondary.

I think, overall, Time Manipulation is a good choice, with a lot of solid debuffs and buffs that will very likely carry me forward through a lot of situations. The problem I’m running in to, however, is recharge time. These powers take absolutely ages to come back online, which combined with bare little need to input commands on my robots means that I’m effectively watching the game play itself.

I’m reminded that Masterminds are a slow blooming kind of class; it takes several levels and powers for things to get going, but I seem to remember that they feel good once they come in to their own. At least, I’m hoping this will be the case. Yikes. 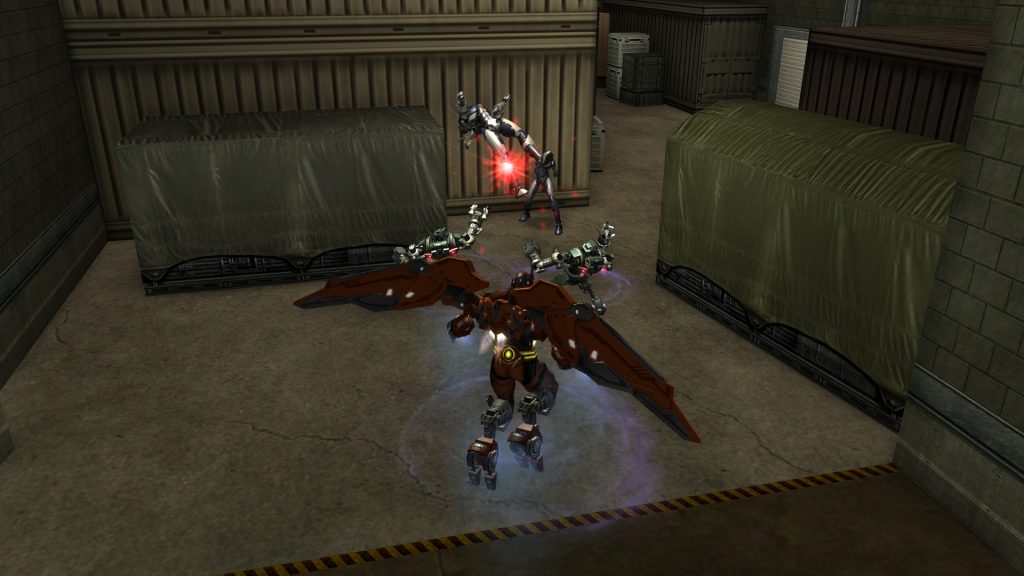 I’m not sure I feel the same way about Praetoria. I’m having a hard time coming up with glowing memories of this place and seem to only really recall ever using the Going Rogue expansion of the original City of Heroes as a means for my main to easily travel between Paragon City and the Rogue Isles where roleplay and desire needed me to. Again, though, we’ll see. I’m paying much closer attention to the story beats this time around, and maybe there will be something that sets its hooks in.

Even at its most passive, though, there’s just something so endearing and engaging about being actively back in City of Heroes once again. And not just being in the game world itself, but actually playing it and advancing and leveling a character again. The addition of the free XP boosters that can make things go by even faster is an absolute godsend as well, not just for this column’s purposes, but also for the purposes of getting to the good Mastermind stuff. “Homecoming” is an apt name indeed for this rogue server. It’s good to be back. 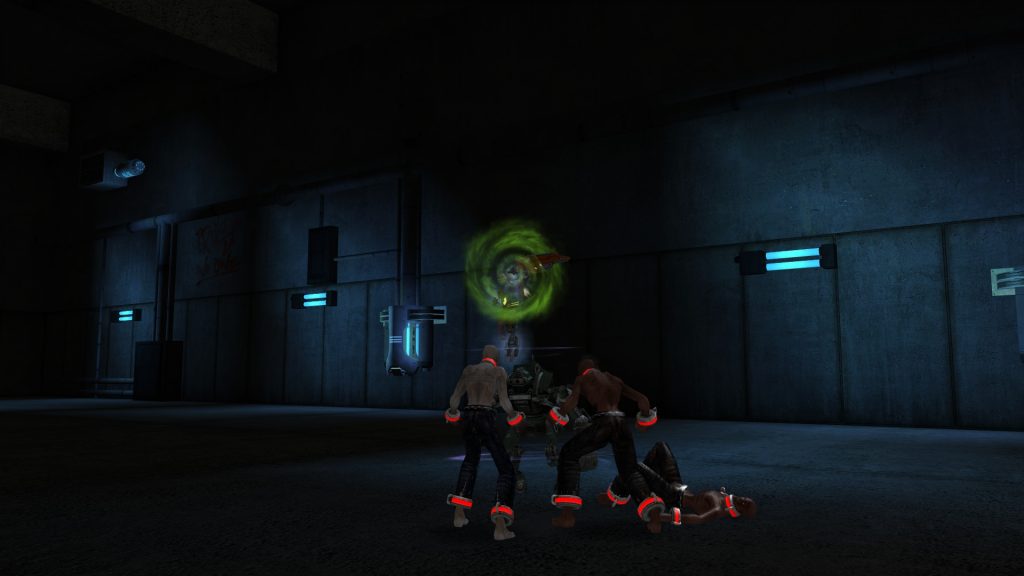 Enough of looking backwards, though, it’s time to look forward! Things are pretty much guided here in City of Heroes for the most part, but I’m inclined to ask the readers a couple of questions and steer the course of little MOPpie into next week.

First off, as I mentioned, I elected to play as the Resistance. That said, there’s still a couple of choices I can make here: namely, to join with the Wardens or the Crusaders. For those unfamiliar, these two factions effectively determine MOPpie’s alignment. The Wardens are opposed to Emperor Cole but still hold life valuable, while the Crusaders are the ones who would win freedom at any cost. So what is the will of the people?

Which side of the Praetorian Resistance should we follow?

Second is actually a poll idea I didn’t even come up with until I started writing that lede up there. While I don’t exactly hate the design I came up with for MOPpie — even trying to follow the color scheme of the site’s logo — I’m inspired by that Silver Age opening to redesign our little robotic friend into something a bit more retro-futurist. Of course, if none of that matters to anyone reading, I’ll happily drop the idea. Let’s put it to the vote!

Should MOPpie undergo a redesign? 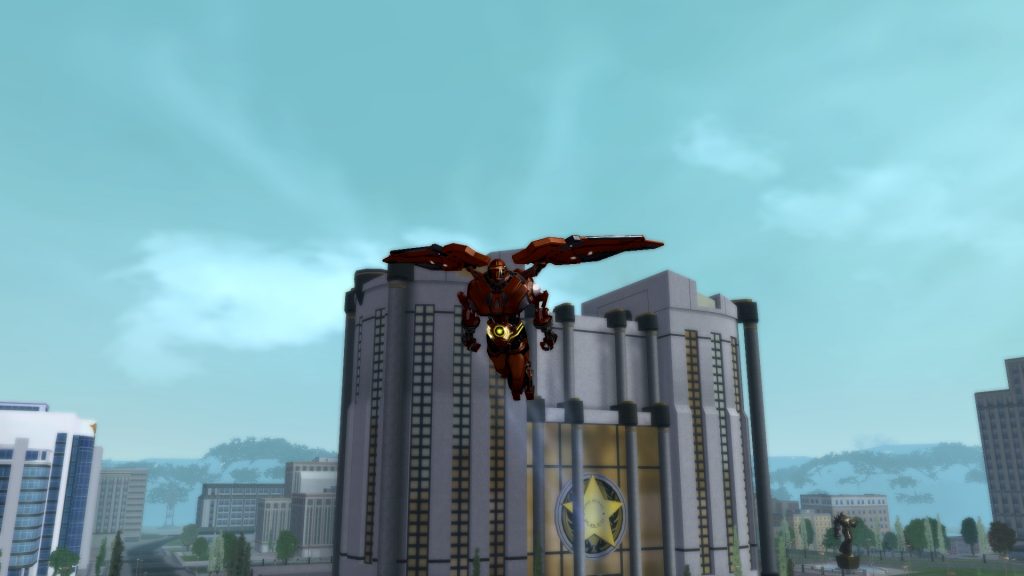 As usual, polling will wrap up at 1:00 p.m. EDT this coming Friday, July 12th. Until then, true MOP readers, here’s hoping for more thrills and less waiting on powers to cool down, and here’s hoping that MOPpie is up to everyone’s standards.