Space. The final frontier. These are the voyages of your Massively OP cartographer into Star Trek Online, to explore a 10-year-old game developed by Cryptic and currently published by Perfect World Entertainment, to seek out new game experiences and new friends, to boldly play a game that friends and family have been talking up for years.

END_OF_DOCUMENT_TOKEN_TO_BE_REPLACED
I like Star Trek well enough to have watched a fair amount of The Original Series and more than my fair share of The Next Generation and Deep Space Nine. You’d think I’d have come around to Star Trek Online a lot sooner, especially with the encouragement of the aforementioned friends and family. It’s even free-to-play. Chalk it up to “too many games, not enough time.”

Something that you’ll discover when you fire up STO is that there’s a variety of factions, which translate into a variety of starting scenarios. This will come as a breath of fresh air for anyone who has had to run multiple alts through exactly the same starting regions and quests in other games. It might be worth noting here that three of the factions are different iterations of Starfleet, with The Original Series and Discovery having been added as franchise tie-ins.

Each faction has its own races (or species) you may know from Star Trek, but for most, you also have the option of creating your own alien, a feature that I played with for quite a while. You want neck frills? They’ve got neck frills! You want a classic bumpy forehead? They’ve got you covered.

The Dominion faction is the exception to the previous two paragraphs. While it does run you through a starting scenario replete with cutscenes, it does not include any tutorial instruction and the Jem’Hadar is the only racial choice. As the pop-up warns you when you create a character, this faction is intended for advanced players. Accordingly, you start at level 60, with all the appropriate starter stuff for that level.

First, I joined Starfleet, arriving at Starfleet Academy just in time to graduate. Captain Taggart picked me for his First Officer! I was moving up in the world! After a lesson in how to shoot a gun, something you’d think I’d have picked up as an elective before graduation day, we headed off into the great dark yonder.

I don’t want this to be spoiler-laden, but about 30 seconds later, Taggart was gone and I was the captain now. Sound cheesy? Yes. Yes, it is. That’s a block of extra sharp cheddar right there. Don’t get me wrong, I love cheese. It’s just that it is so very cheesy.

I decided to skip over to check out the Klingons. There was some… I don’t know, what is the most Klingon of cheeses? Gorgonzola, maybe? Anyway, you get promoted to captain in the most Klingon way possible.

The Romulans had a beginning that was the least cheesy of the factions I tried out. It was Cheese Lite, in that it was a very typical RPG origin story. At least it was a story that made me care a little bit about my character’s backstory. 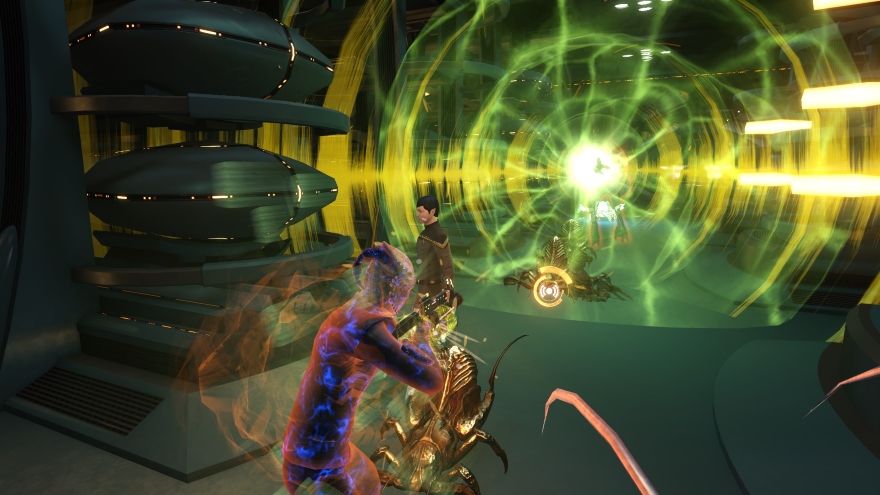 All of the tutorials (and even the Dominion scenario) involve some ground combat. Everything you’ve heard is true. Ground combat is, as multiple sources have told me, “a hot mess.” I don’t think clunky is an adequate descriptor. You’d have to try it. Nonetheless, I didn’t hate it as much as I’d feared based on what I’d heard.

After you’re finished getting command of a ship, one way or another, you get taught the basics of flight and ship combat. I’ve been told that it is better than ground combat, once you get used to it; friends have assured me that I will eventually get the hang of it.

But this is where I have to make a personal confession: I stink at navigating in three dimensions. I stunk at it in Descent (way back in the ’90s), I stunk at it in EVE Online, I stink at it in Elite Dangerous, and I continue to stink at it in Star Trek Online. That’s one of the big things that keeps me from dipping into more space games. I am only half-decent at it in No Man’s Sky because planets are too big to miss and you just need to get into the beam for it to bring you into the space station and get you landed.

Needless to say, I struggled a bit with the controls and getting pointed the right way. I did figure out STO flight and space combat eventually. Kind of. I finished the missions, anyway. I do see what people like about the game, especially if they have better spatial awareness than I do. 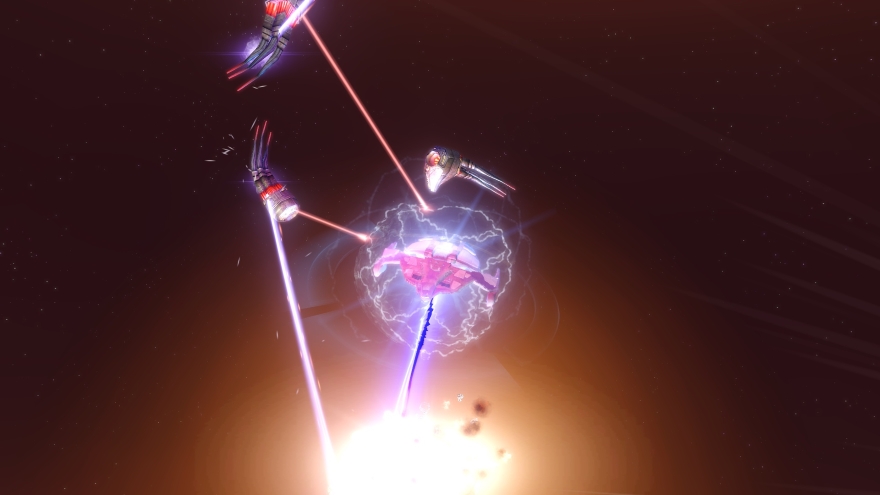 I think Cryptic did an excellent job of capturing the feel of Star Trek in its various eras and incarnations, from the look of Starfleet academy to the Original Series minidresses. There are so many delightful little details for fans of the IP.

At the same time, I don’t think you’d have to be a Star Trek fan to get into the game; even considering my criticism of ground combat and my personal difficulties with space flight, I find it a solid free-to-play offering for anyone who wants to play a game that isn’t set in the realm of swords and sorcery, with a population base still large enough to make it worth jumping into. A basic idea of the lore might come in handy (so that you are familiar with the factions, for instance), but it is definitely not necessary.

I was not sure where to put STO on the “pay-to-win” scale since that this stage of my personal play, I haven’t seen much of that. But I am well aware of the tug-of-war in the community over everything from desirable but pricey high-end ships to the welcome ability to pick up a lot of the neat things from the cash shop through playing the game. It is also possible to exchange Refinied Dilithium, an endgame in-game currency, for Zen, the cash-shop currency. Lockboxes, too, are a longstanding issue for the community, but that’s not a can of worms I am prepared to crack open. Some people spend money. Some people don’t and still do fine. As always on these more subjective points, your mileage may vary.

I like STO better than I thought I would. It is fun enough to keep me occupied for a little while. Unfortunately for me, the crew that talked me into giving it a try has recently moved on to Planetside 2. I guess I’d better learn to shoot.