How much would you pay to play a game that has been shut down as a free-to-play game and then re-released as a buy-to-play game? Your answer is probably something along the lines of, “Nothing! Why would anyone pay for that? Why does this keep happening?” And that is the correct answer.

But for me, the answer was about a dollar. That’s what I spent on Echo of Soul on Steam last December.

A couple of months ago, I thought I would go ahead and give it a try. It is the sort of game I usually write about, those games out there on the fringe. I installed it, messed around a bit with a few different classes, took some notes and some screenshots, all just in time for the announcement of the closure of the Steam version of the game on November 15th.

When they originally announced the closure, Blue Potion Games said you could play the Gamigo/Aeria Games version, with no promise of any sort of accommodation for players, but the good news is that the studio has since told players they can pick up a starter pack for the Gamigo version. The pack includes a boost-to-level-70 item, which is worth quite a lot, both in terms of the cash shop price and time saved. You have to fill out a form that includes your usernames and character names from both services, as well as a screenshot of your Steam character’s info window.

It would have been nice to know this before I uninstalled the Steam version, but I can at least tell you as time is a bit tight to apply for the migration boost package at this point. The deadline is November 8th.

In the interest of making this column useful for readers, I have since switched to the Gamigo version, which brings us to my current adventures in Echo of Soul. In short, it’s the do-over I never asked for.

We’ll start with character creation since I like to break the bad news first. It has gender-locked classes. That doesn’t bother me too much, but I have read enough of our comments around here to know that it is a dealbreaker for some of our readers. Female classes are Paladin, Guardian, Sorceress, and Archer. Male classes are Warrior, Rogue, and Warlock. Class selection provides you with basic information about each class, plus their specialization options.

The character customization is pretty typical for Korean free-to-play games. You choose features and colors. There are a few sliders. Thanks to a fair selection of options, you can get very different looks with a few clicks of the “randomize appearance” button. I picked a class I hadn’t tried before, Guardian; I named her “Mopsy,” grabbed a random appearance, and got into the game. 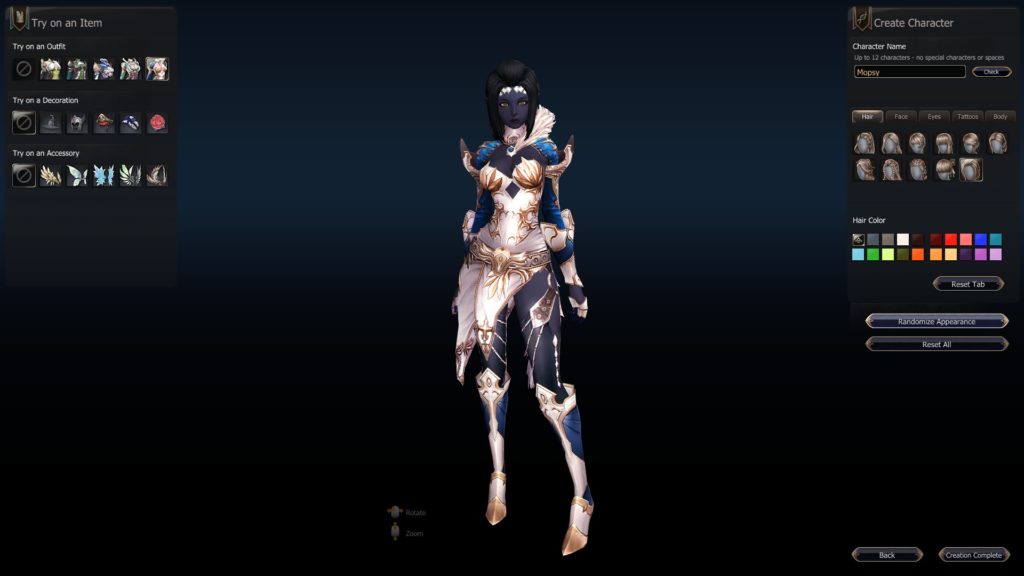 The tutorial stage is straightforward, particularly if you have ever played any kind of RPG, MMO or otherwise. Quest givers are marked with floating punctuation. Talk to a guard, kill a few goblins, go to the turn-in NPC. You know the drill. Those first levels come quickly, and each level up yields a gift, such as an inventory expansion, a pet, or a costume. Combat is acceptably smooth tab-target. It has pointers toward your objectives, but it does not have an auto-run feature, as far as I could tell.

When you first come in, you are placed into a newbie guild. There are some minor benefits to being in the starter guild, such as an experience boost. It gives notifications of logins and guild member achievements, which is the main way I knew I wasn’t completely alone in those first levels of the game. I don’t mean that to sound quite as derogatory as it might; most games that have been running for a while are quite thin on the newbie end.

The Guardian is a spear-wielding class, it turns out. The class name alone wasn’t enough to figure that out. The specializations, Stormguard and Earthguard, are area-of-effect damage and secondary tank, respectively. I thought Stormguard sounded like something I would enjoy, so a Guardian I became. I stabbed and smacked things with my spear all across the countryside until I could become a Stormguard.

The countryside is chopped up into zones with swirly portals between them. After playing so many (mostly) seamless open-world games, I found it felt like a little bit of a throwback. In fact, a lot of the game felt like a throwback to me. That’s fair enough, though, for a game that has been around since 2013.

One thing that I liked about EoS is that it keeps you moving, at least through early levels. Sometimes you return to the quest giver to complete a quest, but for the story quests, you’re frequently sent on to the next area to complete a quest and get a new one. The newbie end of the game is quite streamlined, with quests often asking you to kill about four monsters. This does set it apart from the dozens of older free-to-play games that look and play just about the same way: It isn’t a soul-destroying grind from the first moment you log in.

There was naturally a Halloween event going on during my recent tour, so I got a scroll to teleport to the city where it was taking place. It was fun to run around picking up gifts, placing pumpkins, and trick-or-treating with NPCs. There is a holiday vendor where you can spend Halloween coins on seasonal items. The Halloween display reminded me of holiday displays in bigger shopping malls, right down to the little train running around it in a circle.

It was nice to see that there were other players in the big city. It makes me sad when I go into a game and there aren’t even people congregating in the hub cities. It wasn’t packed, but it wasn’t dead either.

You might be wondering at this point what really sets this game apart from any other Asian free-to-play games from the early 2010s, and the answer, for better or worse, is not much. If you don’t like that sort of game, you won’t like this one either. If you do, you’ll find this one to be comfortably familiar.

WOW, they pull that offer out after all this time. That’s just so lame of them.

Only of those older asian games I still visit is 9 dragons really. Rest cant hold my interest long anymore