While other gaming conventions do big game reveals, the beauty of GDC is that we hear about some of the cool tech and practices going on behind the scenes. It helps devs out, for sure, but it also helps players paying attention better understand market trends and practices that guide our hobby. Oh, and there are also some ads parading as panels, but to be fair, isn’t that basically what E3 and PAX are often are for consumers anyway?

I digress. From this summer’s GDC 2021, we’ve got some news on biometrics in VR, false advertising, ad placement, and charming communities, something a few speakers really could take a lesson in.

Biometrics on the job, but not play

Virtual Reality is all over the place. While VR games weren’t a huge topic this year, the use of bioanalytics in VR got its very own panel. I’m not sold on its use in public speaking simulators, but it does sound like it could help quantify studies into PTSD or give a rough estimate of how an officer-in-training could react in a tense situation that requires de-escalation (especially after Simon Parkin’s chat on the game that decoded WWII Germany’s U-boat strategy).

Of more immediate concern to gamers, though, the tech could be used to help target where and when a game triggers motion sickness to make VR more gender inclusive. I recently had a PR person for a VR game tell me that people just need to grit and bear it, while “proving” her point with a story about a developer who spent over a month vomiting from motion sickness during development. None of the panelists was using VR for this, and one even suggested medication before doing VR. While it could work, it’s disappointing that a panel full of developers at a game developers conference didn’t seem to have this on their radar. At least one lawyer last week seemed to have people’s safety in mind!

How to (not) get new community members

Facebook and Rovio teamed up for a talk on user acquisition, but their pre-recorded panel didn’t include them or the host. Instead, Facebook’s Head of Gaming Sales (Americas) and Rovio Entertainment’s COO answered some good questions but without great answers or crowd accountability, as the GDC moderator let chat know that none of the actual speakers had bothered to show up for their panel. If they had, I’m sure people would have questioned how serious Facebook was when we were told it was supposedly cracking down on false gameplay advertisements.

The Rovio COO admitted during the recording that while this was something it had been accused of, it also wasn’t a successful tactic. While he could have stopped there, he also split hairs about how there’s a difference between “telling a story” and misleading people on gameplay. Had he actually attended, we could have told them that there’s a difference between a cutscene used for marketing and using game assets to create a vignette that includes false perspectives and flourishes of actual gameplay to wholly misrepresent the actual game. While the speakers joked about car ads, the “empty roads” on Nissan ads have nothing on advertising that dresses up the game equivalent of a beat up ’97 Corolla as a new Mustang.

Facebook’s rep did say on the recording that the company “probably” made “missteps” concerning people’s privacy and its use of data, which, of course, the audience could have confirmed. The company did, however, say it believes user acquisition uses too much data these days and should include a bit of “art,” meaning gut instincts, to which Rovio’s COO agreed. Both also noted that, going forward, they would most likely continue to use influencers to push and promote their products, as they’ve been a successful tool and effective spokespeople. 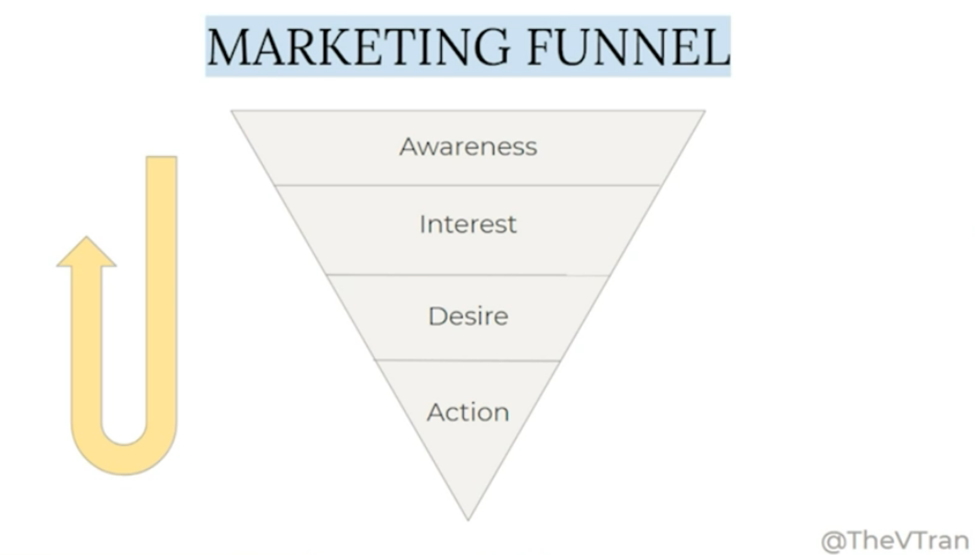 On the other end of the spectrum was Innersloth’s Community Director, Victoria Tran. While Facebook used the inverted pyramid above, Innersloth added the arrow. Traditionally, it seems FB works up the funnel, assuming people will try the game first to drive up desire, interest, and then spread awareness. The goals seemed to be getting people to play more often rather than, I dunno, enjoy the games more.

Tran, however, talked about doing things differently. By doing things such as engaging the community, their art, memes, and partners on social media, her aim was to start with awareness and work down. Once there, they were a member of the community, and so she hoped to move them back up the pyramid but also further along the “Community Journey,” from new member to regular member following the game news, to loyal supporter, and maybe even game advocate, someone who essentially does marketing for you. That is, she starts at awareness to bring players to the game, and once they’ve played, they’ve reached a point where they can really get invested and work back up the ladder, not simply as a passive audience to acquire, but as a community member who actively builds desire, interest, and even awareness for the product.

As Tran is a bit of a personality herself, I’d trust her methods more than the other companies. It seems as if the difference between playing through a WoW raid vs. doing a live GM event where the GM might actually call you out to participate in the scenario. Don’t get me wrong, raiding’s fun, but having a GM tell people to rally to you or attend your RP storytelling night is way more memorable, and the love people show Among Us is something the other two companies probably wish they could emulate.

Again, her strategies aren’t huge secrets. In fact, I’d argue they’re fairly similar to a recent community-building PAX panel we attended. Be weird. Invite people with passion. Promote good user content or remix it for new purposes. Engage the community. It’s not a huge secret, but large groups like Facebook probably can’t pull this off well enough, and considering that the no-show-apology-panel was severely male-dominated while the others actually had women does make me wonder whether the big boys couldn’t use a few big girls to help.

Game subs making a comeback, ads waiting in the wings

So that’s not something I thought I’d be writing, but here we are. While I’ve been more critical of subs lately, especially given battlepasses, in-game stores, and other monetization strategies designed to get you to part with as much money as possible, George Jijiashvili, Principal Analyst at Omdia, made some pretty valid arguments.

For a moment, we’ll ignore that 11% more GDC devs disagreed with the idea that subscriptions would devalue games, or the fact that 53% of the top-grossing mobile games have subscription options. No, his argument that payment options, scaling from F2P access all the way up to the sub, simply made sense. While I’ve seen it abused far too many times, such as the initial conversion of SWTOR to F2P or Nintendo’s greedy Mario Kart mobile title, I won’t deny the idea that a company could potentially do things right. I know I dropped a little cash on Fall Guys even though I didn’t finish the season, and I would honestly pay Niantic a little money per month if it meant a fat storage upgrade in addition to my game event ticket purchases. The issue, though, is less about “Should games bring back subs?” and more about, “What’s fair to offer when offering subs and other monetization options?”

Devs do need to make money, and one of the other options could be ads. Vungle SVP, Scott Silverman, noted that increased advertising is at least working more often. While he argues that it’s more acceptable to gamers, I worry if perhaps it might be more fair to say it’s less problematic. Calling an ad between scenes a “palette cleanser” sounds wholly disingenuous, and I say that as someone who has been commenting on ad placement in social mobile titles for a few years here.

While there are right and wrong ways to go about it, Silverman is correct that timing is everything: At the end of mission, at the death screen, between scenes… yes, these can be acceptable, if they don’t break immersion or make it feel as if we’re being nickle-and-dimed. Sure, putting an ad at the death screen to lessen my punishment may be more acceptable than during the middle of a fight, but I’m not clicking on that link because I enjoy it; it just takes the sting out of death. Given the option between ads as punishment and a small subscription fee, I’d probably choose the latter if I really enjoyed the game a lot.

But when I brought up why use ads instead of promotions, Silverman replied, “Ad placements are typically to drive incremental revenue on top of IAPs VS promotions/events often being intended to lead a user to a new action. The goal of promotional item/event is increased engagement where as ad placements the main goal is monetization, with hopefully positive engagement as well.”

Basically, the ad just gives the devs cash, the promo is for engagement. An ad can be passive, but clicking ads usually involve draining your data and time. Players should consider what kind of content they’re willing to pay for, as monetization will become more aggressive if the games we love also aren’t funded. That being said, devs also need to consider what monetization strategies and businesses to advertise that make the most sense not only for their players, but their gameworlds as well.

MOP’s Andrew Ross has been reporting from GDC’s summer digital event in 2021! You can find more of his coverage right here: