There’s a bit of a theme at GDC 2021 concerning online card games, especially TCGs, and smart tech/deep learning AI. At a panel this week, NetEase’s Yiheng Zhou noted that bots in general have a long history of use in games. Behavior trees combined with turn-based games lend themselves quite well to the realm of TCGs, but AI isn’t limited to just being your opponent or occasional ally.

By way of example, Hearthstone Lead Data Scientist Tian Ding walked us through several of the ways Blizzard’s uses the tech, but perhaps one of the most interesting (and for our readers, relevant) uses is for deck building. As a bit of a TCG fan myself, I found Ding’s discussion of how the AI makes conclusions about what to use it essentially the same as what most competent players use, except Blizzard feeds the AI data not only from the playerbase at large but from high-end players who shape the meta. One thing this can do is to help ensure that new or returning players can get help avoiding newbie pitfalls, but the same tech could be used in other genres for the same purpose.

To briefly go over what Blizzard feeds the AI, Ding noted areas such as card synergy, overall power, popularity, mana cost, win ratios, and even themes. Players can start from scratch or include a few cards that they like for the AI to build a deck around.

On the one hand, that does close the skill gap more, so mid-level players may obviously have to fight harder for wins. Theoretically, if players players are given the ability to have better decks built from them from their available resources, newer players can at least learn powerful and/or popular combos to build decks around. 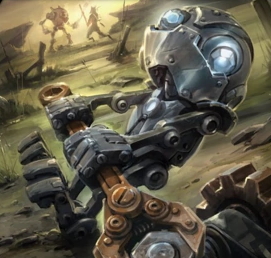 Since the AI building the deck does so based on the meta and not any preformed deck-balance notions (i.e., in Magic the Gathering, you usually want about 24 land cards per deck), players may not learn everything about building a deck, but they at least may notice some trends. This helps more people get into the game and feel successful, so even though a mid-level player may not necessarily win as much, her queues should be shorter and the community more robust.

This immediately made me think of MOBAs and ladder match PvP games, as talents/loadouts are often strong indicators of how a player can perform. For example, builds with lots of synergistic talents can excel when the right moment strikes, but a generalized build with talents that may not work in a PvP environment make the player more of a liability. When I asked Ding if Blizzard would be using the described AI for other games, like World of Craft, he noted that it was a “good suggestion.”

As MMO players, I’m sure we’ve all made those terrible builds where we noticed we missed out on a great combo or left out a few key talents that could have given our build more focus. We also, however, have probably been in groups where other people did the same thing, perhaps after reading a popular but dated article.

Using Smart Tech to build a kind of “Talent Suggestion” tool could help more new players have competitive builds in talent-based games. While skill will still be a factor, it could be one fewer hurdle in the onboarding process. Once players have a vague idea of what’s possible, they can free-form build if they choose to do so or simply enjoy the game without being quite the burden they may have been if they simply clicked a few talents and marched into a match.

Remember, the AI’s choices are guided by high-level player-driven metas. This means that high-end players are still driving how the game is played, but new/returning players at least have some clues as to what’s going on. While said players could try to game the system and “poison” what the AI learns, it also comes with the cost of their personal ranking and win/loss ration.

It also needs to be said that the AI doesn’t look at the meta as a whole, but takes into account both rank and player skill (such as matchmaking criteria). As many of us know, the meta among low-rank players who may lack a certain card/character/equippable may be completely different from that of high-end players with access to whatever their hearts desire. What this means is that having the AI suggest a deck/build isn’t a one-and-done scenario; it requires the players to recognize when they either need to learn the game better or create a new deck/build, perhaps even without the AI’s help if they reach a specific skill level.

I’m sure PvE games could also track stats and attempt the same thing for PvE talent building, which could bolster the pool of available raiders and hopefully give raid leaders less of a headache. As PhD student at UC Santa Cruz Batu Aytemiz noted in his presentation on using AI to assist players, players can feel rejected by games and communities when they fail to mesh with a game. Any system which can help move players through the learning stages in a manner with the least amount of pain can potentially help grow that game’s community, and everyone benefits from that.