You may have noticed that accessibility comes up a lot whenever we cover GDC, and GDC 2021 won’t be much different. However, while presentations often repeat some of their advice, one thing I keep noting as a player is that developers have all kinds of interesting tech and approaches but outside of certain developers, games feel like they’re stuck in a rut. Press the button, kill the mob/player. Repeat this quest 100 times for a reward. Do the jumping puzzle for the chest.

We can do better. We have the tech and people thinking outside the box. We don’t even need to go into AR or VR to do some of these things either, so let’s talk about some of the current and progressing tech devs can make use of to not only make games more accessible for a wider spectrum of players, but the gaming crowd in general.

UC Santa Cruz PhD student Batu Aystemiz noted in his presentation on using AI to assist players that the game Celeste is both quite difficult (in terms of being a platform) but also flexible, as it contains an assist mode. Think something like a “cheat code” input, where you can give yourself infinite stamina or stamina, but you can modulate some things, like the game speed or air dashes. As Aystemiz notes, these don’t just help gamers who may have a disability; they also help other players who may just want to experience the story or even have a temporary issue, like a broken hand. In fact, Aystemiz noted Mario Odyssey‘s assist mode, which points the player in direction of the goal (a feature we see in many modern MMOs) and helped him both when he broke his collar bone and when the light in his room made it difficult to read the screen.

Assist modes might be a bit tricky in competitive games, especially ranked PvP. That being said, I think the option to cut through boring content to reach your play style/level is also important. As I recently noted, Crowfall’s starter experience was awful for me. Like many of you, I am not new to the genre. I know about kill and delivery quests, vehicle combat isn’t that complicated, and is it really that important to level up if you’re doing a PvP game that seems to rely more on gear than levels?

For MMOs, a simple “Done” button could suffice, awarding XP or key quest completion to any quest that may be non-essential. By “non-essential,” I mean genre tropes that can be experienced in any other game. Quests that may explain rules of the game, like crafting experimentation or siege stages, clearly shouldn’t have this (though I’d also argue many games should just be boiled down to the essentials and stop wasting dev and player time). Players who love grinding can still go about this, and repeatable quests could simply force you to do a daily the first time, but saving players time also allows them to do the activities they want to do.

Several years ago, I had a non-MMO player try to get into ArcheAge with me. While she loved the way the game looked, it didn’t click with her. It took too long for her to get to a point where we could really team-up. Even though Mario games could be a bit much for her, having only a few moves on her hotbar just wasn’t fun, so she checked out after probably less than an hour.

Aystemiz spoke at length about using reinforcement learning (briefly, AI that learns by doing an activity for points, as opposed to a navmesh that basically acts as pathing) so that AI can tackle things in a more natural sense. This allows developers more flexibility. We know this kind of AI can be quite good at beating players, as seen through AlphaStar’s Starcraft II dominance, but we can use it for assisting as well. The AI can be tweaked to focus on macro or micro tasks, as we saw with Hearthstone’s deck builder AI assistance.

We can be as extreme as turning any game into an endless runner where the player worries only about, say, jumping over obstacles, but it can be toned down as well. The AI could act as units you send out in an RTS, or could be the commander sending players out to complete tasks. Rather than some random potentially bullying everyone in the BG, the AI could not only announce that a base is being captured but specifically ask players to do something. Imagine Thrall suddenly asking you to stealth past a player blockade to cap a base, or finding out that Malfurion told the healers to focus on your warrior since you have the most mitigation capability. This may be a bit much for competitive play, but it could come in handy for PvE as well.

Think about escort quests for a moment. Imagine reversing their normal flow. If you’re having a hard time with a quest or raid, even with your friends, you could bring some AI with you. The AI would lead and wait for you to catch up, and briefly explain what’s expected of you, like asking you to turn the dragon away from the group when tanking, or to cleanse fire when your group mates are burning. We already see simple things like this, and having AI “mercenaries” is nothing new, right Guild Wars 1 players?

Yes, this may threaten the human population, as players may potentially socialize less. But if mercenaries are limited in power, players who want to tackle content faster would seek out other players. As the AI is also acting as a coach, that could potentially free up raid leaders and class leads from doing the same live on the spot for players who have never tried that content before. It helps ensure that more of the playerbase is competent, which I know can still be a major struggle for casual raiders who are trying to catch up to current content.

We’re still thinking a little small, though. Notice how most of the content I mentioned is at least a bit violent. Yes, that’s normal in some genres and fun sometimes too. But we can turn things around a bit. Robin Hunicke, Co-Founder at Funomena, noted how tower defense games tend to be based on war or colonization. But what if we went with a kind of space colonization mission, and instead of fighting aliens, fought the elements? A true PvE situation, where players need to build defenses against asteroids, electrical storms, solar flares – whatever a developer wants to imagine.

We don’t have to stop there. In this kind of environment, direct conflict could be suicide, so perhaps the denizens of this world battle through trade. Guild leaders running towns might try to strike deals with others to grow their towns so they can raise animals, own property, build sports arenas, or even go into space and find new worlds. We could even throw in language learning and diplomacy with NPCs.

Alelo’s Tactical Iraqi, released all the way back in 2007, is a language and culture game used by the military to train soldiers for interacting with civilians, but it requires not only emotes but player voices as well. It’s not the only one of its kind; even Google’s done games using voice control. Anyone who’s tried using Rosetta Stone probably has had experience with getting stuck on proper pronunciation, which shows the higher-end of the tech can be finely tuned, though we also know from Alexa that AI can mishear things and create potential issues. That being said, the tech seems stable enough to play with, which isn’t just fun for me; it could allow players with limited hand movement or coordination to enjoy games too. I mean, if we’re saying magic words anyway, why not let people actually have the option to say the words to cast, especially in VR where headsets are already equipped with a mic?

Approaching games from a cultural aspect also opens up some deep opportunities for immersion. Game developers can create whole new cultures and ways of thinking. Even outside of games, people with different ways of thinking have innovated various industries, from animal behavior to the Pokemon franchise. 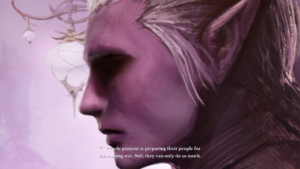 Maybe having to search for someone who can actually speak Elvish to avoid a difficult raid boss won’t be everyone’s cup of tea, but it sounds neat to me. A handful of Jackbox games could be tweaked to be features in an MMO, even if it simply had mobile users act as NPCs in various niches of a larger game. I’m sure developers can use their imaginations and newer tech to make something we can all enjoy if we can just move past the money of AAA games and look at how more innovative games bring in people from all walks of life.

After all, as Courtney Craven, founder and Editor-in-Chief of Can I Play That?, mentioned during the panel, 15% of the world’s population have some kind of disability. That’s about a billion people, making them the largest minority in the world. They have $21 billion in US discretionary income (which entertainment would fall into), and 70% will click away from content that’s not accessible to them. Accessibility could help developers not only with innovation but with catering to an audience that has extra income but perhaps few people considering their needs. And as someone who isn’t deaf but always turns on subtitles, I can tell you that accessibility tools can attract mainstream gamers as well.

These features also come with subtitles, music change, character animations, etc. to denote that something is happening. Really awesome game.

the pawn system carried over to Dragon’s Dogma Online (rest in peace) and it was super helpful when you were playing a game with a fan translation that didn’t even fully cover the mechanical parts of the game, let alone story or dialogue, so having those phrases be part of the translated stuff and getting a few pointers on how to play when there wasn’t really any guides or wikis in English was a blessing.
I hope we get an announcement for DD 2 soon.