For some people, Jackbox Games’ Party Packs were a COVID lifesaver. While many of us have a lot of virtual connections thanks to our MMO communities, others don’t have much overlap between our virtual and meatspace lives. As we struggled to keep in contact with family members who were drifting further and further into awkwardness or simply wanted to keep in touch with people we did only physical activities with, Jackbox Games provided accessible, cheap gaming that drew laughs, teased out creativity, and even showed some people why we enjoy games so much.

And apparently, some of y’all didn’t know about the series this whole time, so let me rectify that. 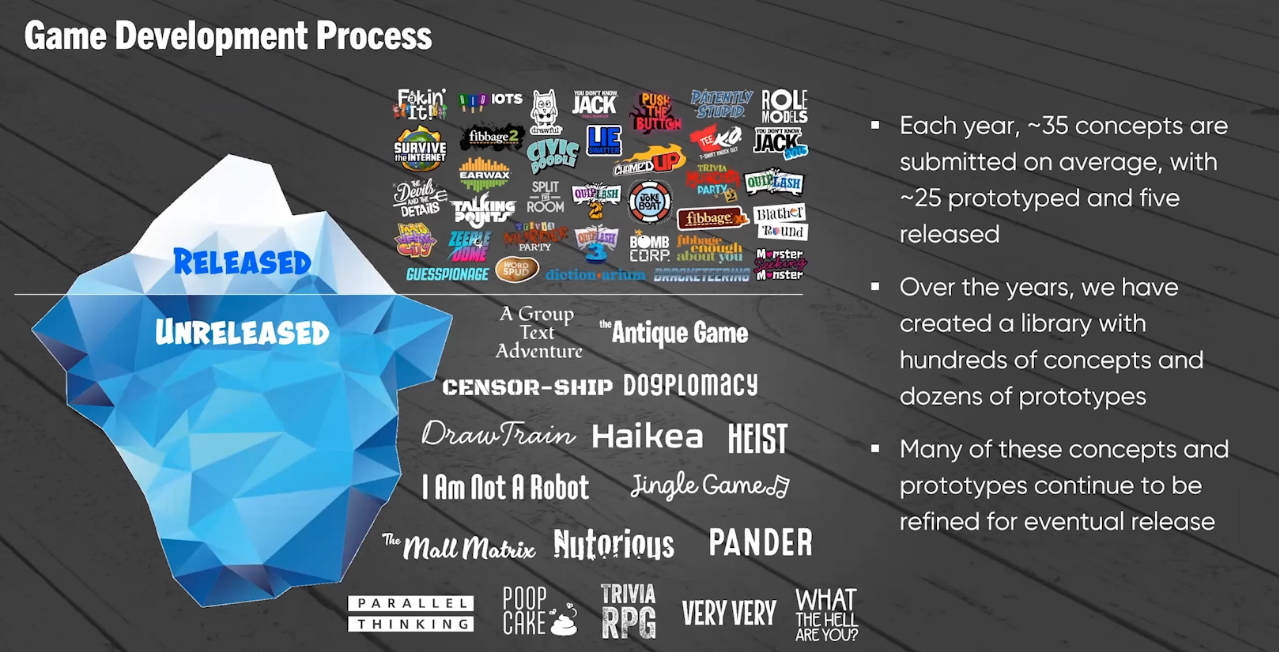 At PAX East 2021, Jackbox CEO Mike Bilder held a little storytime for attendees. He talked about playing the original You Don’t Know Jack prior to even entering the games industry, how we can actually thank the dubious Ouya system for pushing the team into Ecast tech for Jackbox.tv (the browser site that allows the series to be played on any modern platform with no additional controllers), and how many of the company’s games are initially internally demoed with pen and paper before being digitized, and then only if that will improve it. Some games actually get rejected but may get another shot at making the cut later, including the ever-popular Trivia Murder Party which we’ll discuss later.

It’s neat stuff for people who have been using the series to get non- and light-gamers back into the swing of things, but especially before COVID, Jackbox party games were usually just something I’d do maybe once a month after a hard few hours of IRL Smash Bros or other local multiplayer game sessions. Then lockdown happened, safer-at-home became a way of life, and the non-gaming populace in particular started to get… weird.

My console gaming group, for example, went virtual. While we’re all gamers, people’s tastes range from visual novels to MMOs. We may play Monster Hunter together for a bit, but then people may gravitate toward Mortal Kombat on release day. It’s why we met monthly and had a load of TVs and consoles for multiplayer. Because of COVID, though, aside from the usual, “Anyone want to join me for [this game]?” we’d have a Jackbox night.

And that’s when I started hearing about how other people had been doing the same thing with friends and family. The BBC suggested it. The Japanese Expat group I got a newsletter from set it up for a game night. It seemed as if it was becoming popular with the masses.

But recently, I learned that some of my MMO contacts hadn’t even heard of the games. While the games vary greatly, from trivia to public presentations based on your drawings, they tend to only be a 5/8 on the MMO-ness scale and certainly are not persistent games. That being said, they’re very online, multiplayer, and importantly, accessible. 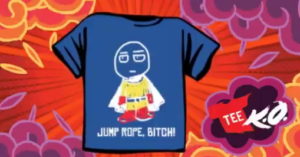 Trivia and memes with grandma

Jackbox games are both varied and rather accessible, and I say that as someone who got a relative who is hard of hearing and not a native English speaker to play several different games with moderate success – and a bit of patience.

Essentially, you launch the game on whatever platform you have on a TV/screen everyone can see (or stream it for online play), choose a game (party packs tend to run for $30 pre-sale, less than the cost of a board game), and then have people use their mobile device or PC or whatever to go to Jackbox.tv, where they enter a room code. Most games are for 3-8 people, give or take. Your device then becomes your controller and private screen.

I won’t go over all of them here, but there are a few games that I think highlight the series’ strengths. Drawful is a kind of Pictionary if Pictionary had prompts like “Pajama Fashion Show” or “Buttered Fist.” However, to speed things up a bit, players each get to secretly enter what they think the prompt is all at once, and all answers – including the right one – are displayed as a kind of multiple-choice question. Guessing correctly gets you points, but people who select your prompt also grant you points. It’s popular enough to have gotten a sequel and an upcoming animated version. (There’s also a similar, completely free browser game called Skribbl.io that is quite similar but also has custom words, so feel free to give it a spin, maybe with MMO references for your guildies.)

Artists may also like Tee-KO, a shirt-making game. A real shirt making game, as players can actually buy real t-shirts of the ones made in their game. Players enter as many slogans as they can within the time limit, then draw a few designs. The game distributes these in small batches to all the players, who then make the best t-shirt they can. The shirts then “fight” head to head, with players voting on which one they like best until only one remains. And then they do it a second time, and the winners of the two rounds fight it out. You don’t need to be an artist or very quippy to win. They help, but being able to combine the slogans and art tends to be the path to both victory and big laughs.

As you can probably guess, yes, Jackbox games can devolve into penis and poop jokes quickly. The trivia questions can get dicey too. Newer games do have a “family” setting, though, and there are mod tools for streamers to censor images/inputs they don’t think should be displayed. Newer trivia games have an option to cut out US-centric questions that might not work for other cultures, and some games, such as Fibbage, even have localized versions.

Also, not all games require drawing. The previously mentioned Fibbage is a basic trivia game, but the goal is to create a believable but fake answer to the trivia question. People who may not feel very creative can use a “Lie for me” option where the game will generate a response, though at the cost of fewer points awarded to you should you win the round.

For something a little different, there’s Trivia Murder Party. Think Saw, but PG. Get an answer wrong and you’ll cut off a finger that will correspond to one of the multiple-choice answer slots, preventing you from selecting that option when it comes up. Don’t worry; even if you’re killed off, the final round has you answering questions to virtually chase the current winner. Ghosts get bonus questions to help them “catch up,” which allows them to possess the fleshy body of the winner and potentially still make it out alive.

To be fair, not every game is a winner, and some may work better in meatspace. The Devil and the Details is a game I think MMO fans would really love due to the communication nature of the game with possible PvP-esque hijinks. Players earn points for doing virtual tasks. Single-player tasks are fine, but the big points tend to be in multiplayer co-op tasks like looking up a fake phone number and calling the in-game plumber, or reading off a list of ingredients and making the virtual dinner for the virtual family. You can also get big points for goofing off, like playing video games while others work, but being discovered by other players will cost you big time.

The problem, however, is that because it’s a communication game, chat (voice or text) can get flooded pretty fast. You know when there’s a new MMO encounter and suddenly the boss spawns a ton of mobs that get out of hand? That’s basically this game, except if people could join the mobs suddenly and need to be re-converted back into party members. Obviously just playing an MMO would be better, but if you’ve got a mixed group with people who don’t want to join you in Final Fantasy XIV, this could be a game to play.

Jackbox games are great online games you can play with people who don’t normally game period, much less online. The host will have to be able to stream or do screen share, and everyone will need both a screen they can watch and one they can use as a controller, but that’s much easier to find than getting Uncle Frank set up with a free account, downloading the game, setting up his hotbar, and telling him to press F1 then 1-5 to heal you – and the experience it’ll be much more fun for him. Plus, it’ll distract him from telling you lizard people stories until COVID is over.

Judging by the fact that they have a game called ‘Poop Cake’, I’ve got zero interest in anything they can come up with.

We’ve played this in my office a handful of times and it’s delightful. I haven’t really played these games since like…the 2000’s when you used to have to sit at the computer and everyone had to fit their arms onto the keyboard somehow, but I’m thrilled that they’re just as absurd and fun.

And I still want to know who Cookie Masterson is.

Oh god, I played so much of this with my friends during lockdown. Problem was there was always one guy who knew all the answers and won most of the games because he’d played it 10x more than everyone else, which took some of the fun out of it.

Real talk though, I think one of the few blessings of lockdown is that it has taught adults that they can have fun together without having to go to pubs/clubs and spend tons of dosh. All you need is a mic, webcam, a few friends, a crate of beer/bottle of wine and you’re golden.

Sorry. I am weird. But I saw that header picture and now suddenly I’ve got Brad Pitt in my head, and his despairing wail of “What’s in the box?!?!” And you know what’s in the box. You just don’t want it to be true. OnO

After Lonely Island’s songs, you know exactly what’s in the box. And you avoid it unless you’re into that kinda thing…