When World of Warships launched in 2015, the historical significance of the many ships researchable and purchasable within the game was taken into heavy consideration. As the years passed and new nations with smaller navies were introduced, many “paper ships” (as the community refers to them) have made their way into WoWs’ many battle modes. These are ships that were conceptualized and sometimes designed but never actually laid down.

END_OF_DOCUMENT_TOKEN_TO_BE_REPLACED
I thought it might be interesting to come up with a list of WoWs ships that are both fun to play and can boast a good amount of historical significance. One quick disclaimer: I do not play aircraft carriers, so you’ll note their exclusion. There may very well be some good carriers in the game, but my lack of experience hampers my opinion on them.

The Yamato, along with her sister ship, the Musashi, were the largest and most heavily armed battleships ever built. They were constructed to be able to counter the numerically superior US Navy during WWII, with the theory being that they could deal with multiple enemy ships at once. Her 18-inch guns were the largest ever to be mounted on a warship. She served as Admiral Isoroku Yamamoto’s fleet flagship during the Battle of Midway and was eventually sent towards Okinawa with orders to intentionally beach herself and defend the island until she was destroyed. She never made it to Okinawa, however, as she was spotted en route by the US navy and pounded repeatedly by aircraft bombers and torpedoes. Although exact numbers are disputed, historians conclude that it took at least 12 air bombs and seven torpedoes to sink the mighty warship.

Today, the Yamato rests beneath 1000 feet of water some 180 miles southwest of the island of Kyushu. 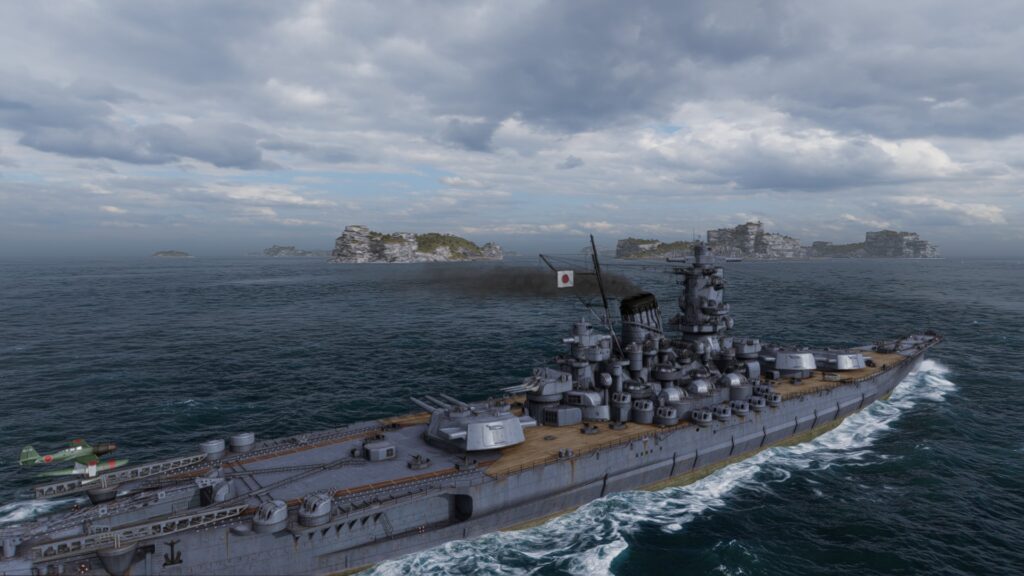 In World of Warships, Yamato sits atop the Imperial Japanese battleship tech tree and remains one of the tankiest and most dangerous ships in the game. She retains her 18” main battery that is capable of overmatching the armor of any enemy ship. The main battery reload speed is also above average for a tier 10 battleship. While her alpha damage is a force to be reckoned with, she is difficult to maneuver and has some of the slowest turret traverse speed available, making repositioning the ship or selecting varied targets a slow process.

The Massachusetts was a South Dakota-class battleship and one of the first to sport the 16-inch main battery turrets that became the US Navy standard until battleship construction ceased. Her most notable engagement in World War II was during the Battle of Casablanca, which consisted of multiple naval engagements between US warships and Vichy France, which at that point of the war had been invaded and was controlled by Nazi Germany.

The Massachusetts, along with other allied forces, attacked an anchored and incomplete French battleship named the Jean Bart. Though still under construction, the Jean Bart put up a stiff resistance with its one completed turret, but eventually it succumbed to five shell hits from the Massachusetts that disabled said turret. With the Jean Bart no longer a threat, the US contingency was able to dispatch the remaining coastal resistance until a cease-fire was called by the French defenders.

Massachusetts was decommissioned in 1947 and is currently a museum ship floating in Battleship Cove, Massachusetts. 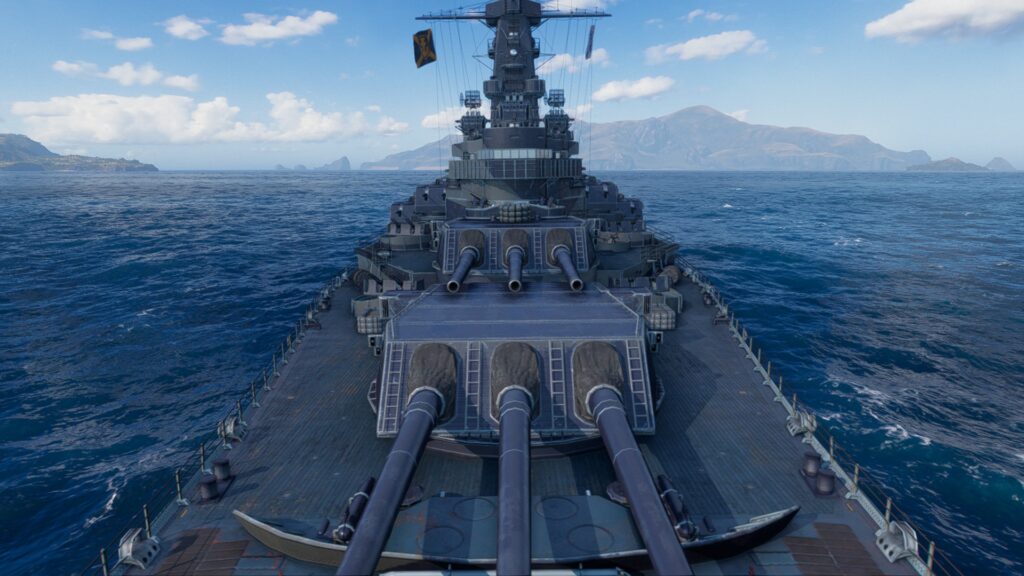 In-game, Massachusetts is a tier 8 premium American battleship known for her nasty, accurate, long-range secondary armament and hard-hitting, heavy American armor-piercing shells. She boasts decent maneuverability and average speed but very good anti-aircraft firepower. Her only weaknesses include somewhat short main battery range for her tier and slow, lofty shells that can make targets at long distances difficult to hit. However, shells that do land often do considerable damage, and if enemy cruisers or destroyers are unfortunate enough to wander into secondary battery range, they’ll get chewed apart in short order.

Fiji was a Royal Navy light cruiser constructed in 1940 and torpedoed by a submarine in her very first detachment. Once repaired, Fiji was deployed to patrol and defend the island of Crete against a rumored German invasion. That invasion force did come, mainly in the form of aircraft and paratroopers. The German air force was relentless, continuing attacks on Fiji and her group partner Gloucester until their anti-aircraft munitions stood at 30% and 18%, respectively. Even so, the two ships were not ordered to rearm and were subsequently detached (by a more senior admiral, unaware of the cruisers’ lack of munitions) to supply anti-aircraft support for a separate unit of destroyers.

After several hours of airstrikes, Fiji had exhausted her supply of AA ammunition and had been reduced to firing practice rounds. While retreating, the Fiji and Gloucester continued under heavy attack until both were eventually sunk by German air bombers. Fiji went down on May 22nd, 1941, barely a year after her initial commission. 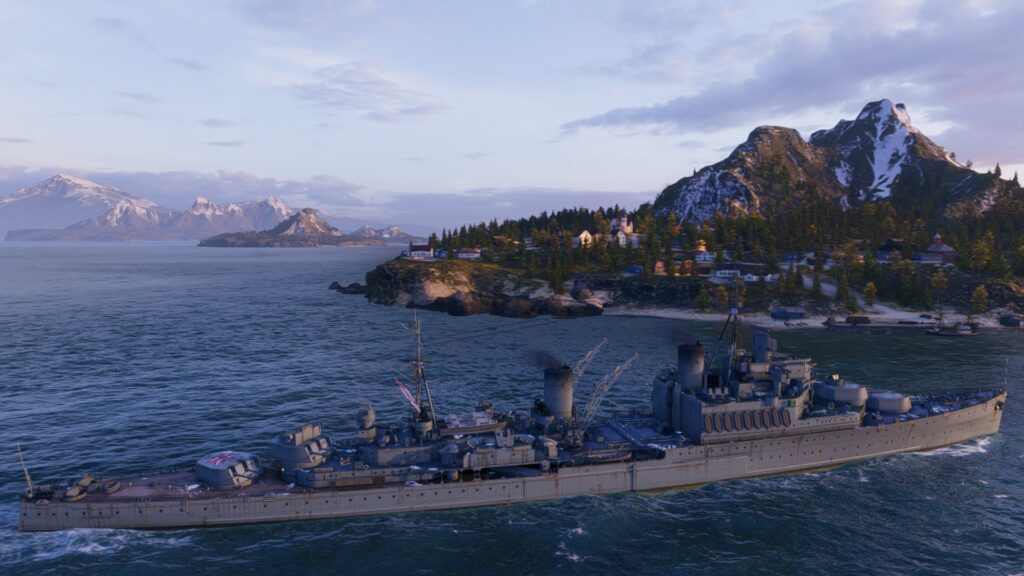 In World of Warships, Fiji is a nimble little Tier 7 in the British light cruiser tech tree. Unlike most cruisers, she fires only armor-piercing rounds but with increased penetration angles that can devastate enemy cruisers and destroyers and even surprise battleships if targeted correctly. While her armor is easily punished by larger ships, she is also equipped with torpedoes and a smokescreen that can be used to disengage, or more often, as cover from which to farm damage off enemy warships. It’s this damage farming, along with creeping around islands to surprise destroyers and fellow light cruisers, that best showcases the Fiji’s main strengths.

The most famous ship in Germany’s Kriegsmarine, the Bismarck (and his sister ship Tirpitz), was the largest warship ever built by a European power. During a time of ever-escalating warship construction, Bismarck was intended to be a powerful symbol of German aquatic domination as much as a naval deterrent. However, Bismarck did have a memorable and historic moment in her brief career.

At the Battle of Denmark Strait in 1941, Bismarck was attacked by two British warships. As he was charged by the HMS Hood, Bismarck turned aft and scored a direct hit with his rear turrets, detonating the Hood’s ammunition magazine and essentially splitting the Hood into two sinking pieces. The fall of the Hood and loss of nearly her entire crew enraged British Prime Minister Winston Churchill, who ordered all British warships in the area to pursue the Bismarck.

For a time, Bismarck was able to evade the force but was caught by torpedo bombers when British intelligence was able to decrypt a German communication indicating Bismarck’s intended port destination. When the Royal Navy eventually caught up with the decelerated battleship, the Navy pummeled him with over 400 shell hits. Simultaneously, the Bismarck crew detonated scuttling charges within the mighty beast lest he fall into enemy hands. Even so, it wasn’t until two torpedoes from HMS Dorsetshire struck the hull that he finally succumbed to his wounds and sank below the surface, a mere nine months after commission. 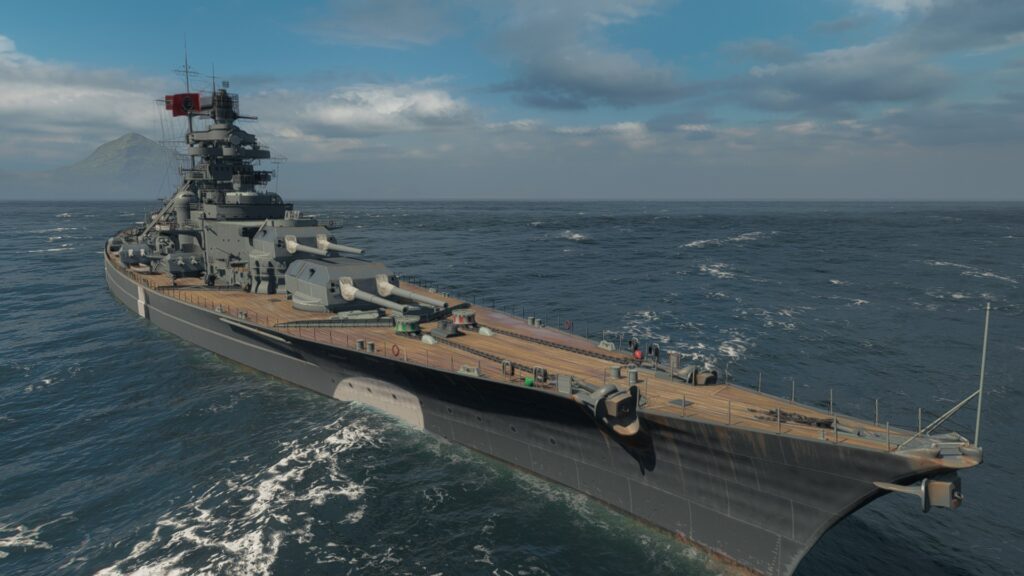 A player who helms the fabled warship can expect a fairly tanky but maneuverable battleship with dangerous long-range secondaries and powerful but inaccurate main battery guns. He’s a Tier 8 tech tree ship, meaning that players can grind to the Bismarck completely for free. This and its name recognition make the Bismarck one of the most popular ship choices in World of Warships. At one time, he was considered one of the better mid-to-close-range (on tier) brawlers in the game,but has since been powercrept by several premiums and the tech-tree German battlecruiser line. Bismarck is equipped with a robust hydroacoustic consumable, which can reveal the location of hidden enemy ships and warn the player of approaching torpedoes.

Atago was a Takao class heavy cruiser commissioned into the Japanese Navy in 1932. She – and her sister ships Takeo, Maya, and Chokai – were designed to be a part of a long-range multipurpose strike force. When built, her 10 20cm main battery guns were the largest of any cruiser in the world.

Atago did participate in many aquatic skirmishes during the war including the Battle of Midway, the Battle of Guadalcanal, and the pursuit of Task Group 16.2 after the Doolittle raid. At Guadalcanal, she scored 17 main battery hits on the USS South Dakota, but the mighty battleship would not sink. While Atago suffered damage on several occasions requiring repairs, she remained afloat until October of 1944, when as the flagship of Vice Admiral Takeo Kurita’s strike force at the Battle of Leyte Gulf, she was struck by four torpedoes launched by submarine USS Darter. In just 18 minutes, the flame-engulfed Atago made her way below the surface of the Pacific. 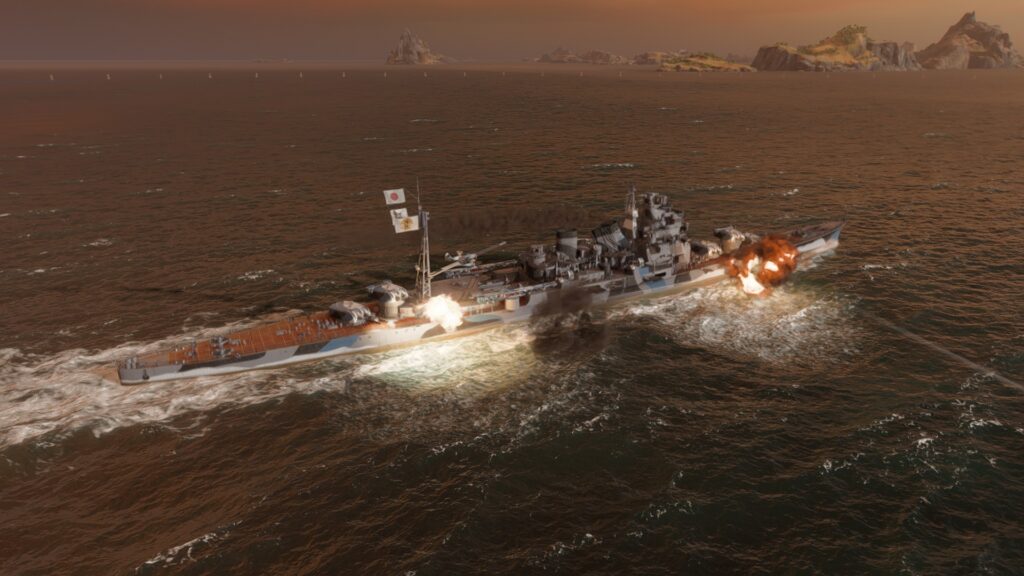 In game, the Atago is available at Tier 8 and was one of the first premium ships offered for sale. Even so, she continues to hold her own against the threat of power creep thanks to her fearful battery, high level of concealment, incredible maneuverability and hard-hitting torpedoes. Due to her stealth and firepower, Atago can fulfill the role of either large destroyer, playing close to capture points and using hydro to surprise enemy destroyers, or kiting cruiser, daring enemy battleships to chase her while she sets them ablaze with high-explosive shells and forces them to dodge her aft-facing torpedoes.

Whether you’re the captain of a historical battleship or a feisty pirate queen on the deck of a smuggling vessel, the high seas are the final frontier of many MMOs! Join the MOP team here in From the Depths for occasional voyages into all the ocean-going MMOs of the moment. Just don’t sink our boat!
Advertisement