When Funcom recently teased an upcoming forum-only event for The Secret World, my interest was immediately piqued. Though we have scant details right now, said announcement was met with equal enthusiasm by many other fans. There were those, however, who questioned why time and effort isn’t being directed toward more in-game activities and content to enhance the game itself. The reason is that this is TSW!

What I think those folks are missing is that this particular title is in fact an experience, not just a game. The Secret World draws you in like nothing else can. No where is the suspension of disbelief so masterfully created as in this game that is literally set in our world, using our very customs, myths, and folklore to weave a tale. Blurring the lines between the game and reality is what TSW is all about. That’s why things like ARGs are so perfect for it: The game is quite literally brought to life, and you are left questioning what is real and what isn’t.

Funcom wants to offer more play out of the game? Bring it on! To do anything less would be to waste one of the game’s biggest strengths. 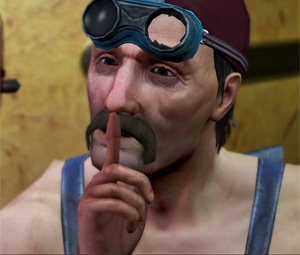 The secret sauce of TSW

It’s all about the… what? The conspiracies? The conjecture? The bone-chilling creepiness that makes you jump out of your skin when startled? What exactly is that secret sauce that makes The Secret World so delectable? It’s all of the above and more.

TSW is a classic case of being more than just the sum of its parts. Even more than the awesome NPCs made oh-so-real by talented voice acting that you want to get to know better and the spooky atmosphere with haunting sounds that have you constantly looking over your shoulder, it’s the perfectly timed scares and the jaw-dropping revelations you never saw coming. It’s the ever-present feeling that you might miss something, some minor clue, that will be vitally important later, coupled with that nagging doubt that if only you’d listened better in history class in junior high, you’d have the answer already. It’s the way answers come to you at the oddest times, like at dinner with your in-laws or in the middle of your favorite show.

With realistic I-can-actually-go-there locales, familiar tidbits of everyday life, and missions that utilize our knowledge and understanding of the real world around us, the game manages to feel like a part of life even when not logged in. It’s the way everything all combines together and worms its way into your psyche to sit there, snuggled deep down, leaving you with a slightly uneasy feeling that you can never quite pinpoint until it pops out unexpectedly and knocks your drink all over your keyboard. The game gets in your head and doesn’t go away. It’s all about the real-world connection. That is what makes TSW so compelling!

Something wicked this way comes?

Now the big question is, what on earth will this forum event be? Funcom has hinted that the event has something for everyone, from the roleplayers to the PvPers to the fashionistas. Will it be ARG-like? Will there be puzzles to solve? Honestly, half the excitement is in the anticipation. TSW has shown itself to be an innovator, coming up with new things to enthrall and entertain us. I for one can’t wait to see what it is.