Everyone needs those epic action moments in MMOs from time to time when everything comes together to deliver a pulse-pounding experience. From the looks of our first picture this week, reader Wonder Llama found exactly that in Firefall.

“So you know that scene in the action movies where the hero is running like hell to stay ahead of the shock-wave of some huge explosion, and it looks really really cool?” he asked. “Yeah… been there, done that! On a side note, I discovered Firefall has this really nice feature that I wish other MMO companies would shamelessly copy: It lets you record the events that took place in the game and then play them back inside the game engine. It’s like recording a video, but a thousand times better because you can pause it, pan around, rotate, and zoom the camera to get some fantastic screen shots!”

Trust me, this picture looks even better in full color! 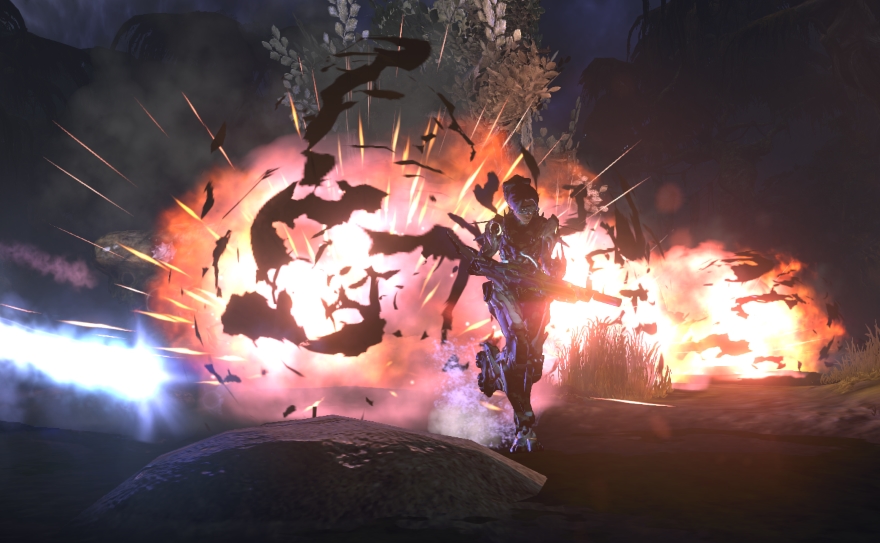 Downshifting from action to sorrow, last month’s passing of Leonard Nimoy hit a lot of players hard, but perhaps most of all the community of Star Trek Online. Players flocked to Spock’s homeworld to pay homage to both the actor and the character, as the following screenshots attest.

“I’m sure you’ll get a few, but here is one of my screenshots from Vulcan,” reader Roger submitted. “May Leonard Nimoy’s memory live long and prosper.”

“Here is a view from the gathering on Vulcan in STO to remember Leonard Nimoy,” reader Kaeli said. “There were a few quickly ignored trolls, but for the most part folks were there only to honor Mr. Nimoy’s memory. We gathered and shared a toast “to absent friends” at one of Vulcan’s temples. Tears were shed. I’m the female Vulcan in the Wrath of Khan uniform. It seemed appropriate.” 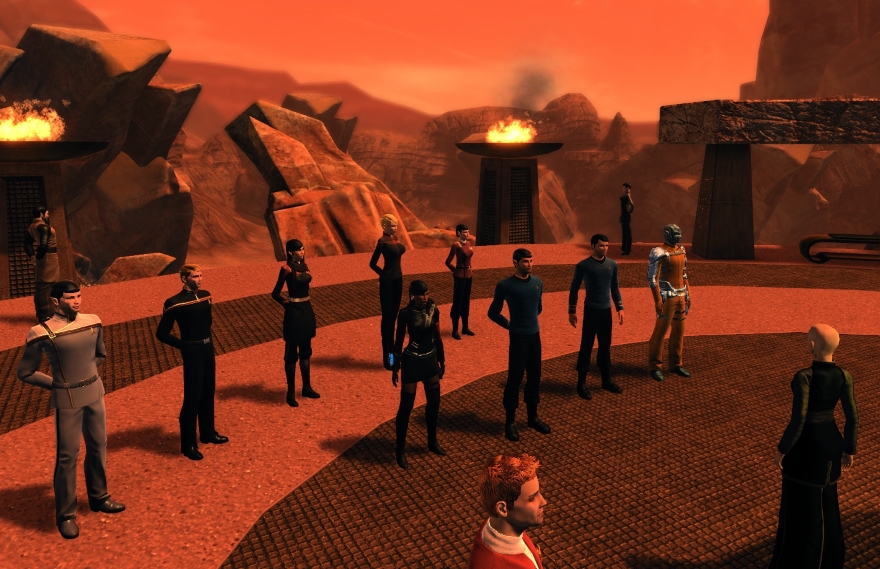 Sometimes RIFT really impresses me with its landscapes and sights, and sometimes I feel that the visuals are a little drab. It’s a mixed bag. Sticking out the bad is worth it to get to the good, as reader Zakiel proves with this incredible screenshot.

“This is where my path took me in my endless chase after Arak, Lord of Nightmares,” he said. “Don’t be mistaken; this is not him. It’s just one of the three guardians you have to defeat to see Arak escape yet again.” 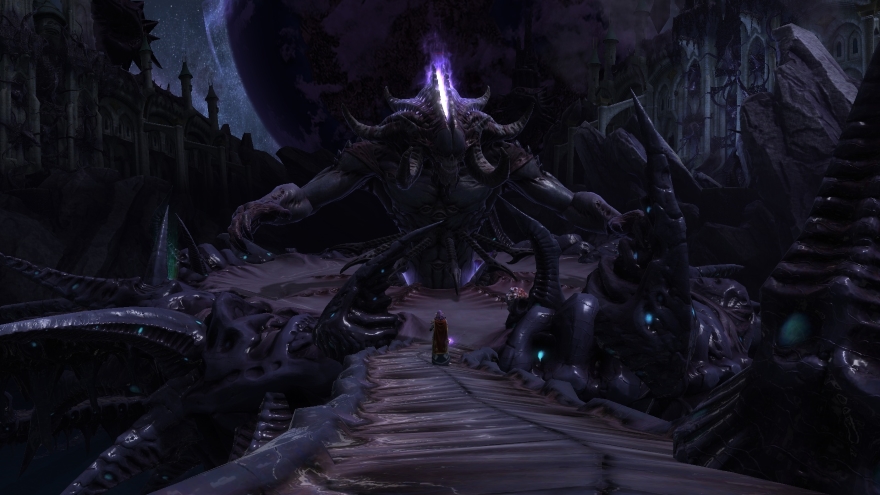 There were so many great possible It Came from the Comments Section! picks to choose from lately, and even though I recently featured a Star Wars Galaxies pic in this space, I couldn’t ignore this shot (plus, it thematically bookends our header!). So dang cool.

“One of my favorite things to do was log in really late and solo the Star Destroyer in deep space while I blared music from the Star Wars movies,” reader Misterbeefy117 wrote. “Always made me feel like a badass. On one of those nights, I just happened to get the perfect screenshot of my X-Wing escaping from the Star Destroyer right before it went kablooie.” 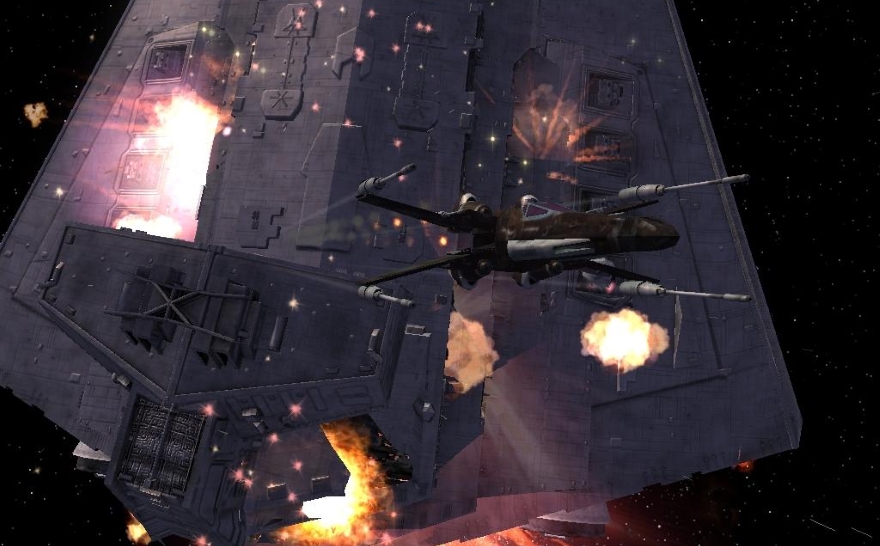 My screenshot challenge to you this week is a doozy: I want you to take four pictures in your favorite MMO, one for each season (a “spring” pic, a “winter” pic, and so on). Let’s do a seasonal column in the future!

Koshelkin JonBuck There’s a different pool of fish to fish from that’s dependent on the weather and the time of day the player goes fishing in XIV.

I’ve wondered that since 2004 or so. If many/most interactions are logged on the server (for debug/exploit purposes), it would theoretically be possible to save the logs and rerun them through the game engine to recreate the events.
If you gave everyone some space to save recent logs to, you would have the ability to replay moments of glory, or have objective records of disputes that too frequently turn into he said / she said.
But I’m not an engineer. It’s very possible this would give servers or databases an aneurysm.

Koshelkin I don’t think the weather makes a difference in this game, but I could be wrong.

Annnd a few more, including one really mean-looking cat.  I also like the angle of the first shot. Lyn squads are nice.

Arcsine The most “regular person” in the game is the Smuggler. Just think of it. The opposite of the IA. No special training, just a guy/girl with a ship and a blaster or two. Mows down Sith Lords.

JonBuck In FFXI your fishing chances were increased with rainy weather iirc.
So this seems to me more like a lucky coincidence.

I completely forgot to submit my screenshot for this week’s movie challenge, but here’s my Imperial Agent Operative facing off against one of those wretched Jedi. Despite all of the game’s problems, my IA is probably my second favorite MMO character ever. I know a lot of people were upset that non-Force classes were made to be equal with the Jedi and Sith, but if you think about it, the IA was a top-of-the-line operative, with the best gadgets and training capable of a multi-system Empire. It’s like Jason Bourne and James Bond rolled into one, with the tools and training (not to mention, in my case, cybernetic implants) of a massive, futuristic government. If that’s not a match for a Jedi, I don’t know what is.

I feel like i really missed out on something when i didnt play Star Wars Galaxy :(

Have some shots of other folks’ player characters. My character is the absolute tallest a Lyn can possibly be in the game (scaling up height, calf length (yes, this is a slider), thigh length, and waist length to the maximum size), so that’s your reference. Also included is a shot of one seriously frightened-looking Lyn, much to my character’s amusement.
The breadth of variety possible with the character creation is truly astonishing at times, though unfortunately a large number of folks like to use it to make generically sexy ladies. Not that there’s anything wrong with that, mind you. They just tend to blend together in my mind after awhile.

I was wanting a good screenshot of my custom plates and noticed the sign lights matched my car lights perfectly. Unfortunately, while trying to get up close I ran over one of the bar customers and now a bunch of men in drag want to throw down. So GTA.

The feds are now investigating Activision-Blizzard as the SEC subpoenas execs...