Those ex-ArenaNet folks won’t be going to waste at Amazon Game Studios after all: One of the three games the company is working on is indeed an MMORPG sandbox game called New World, and it sounds goddamn epic. 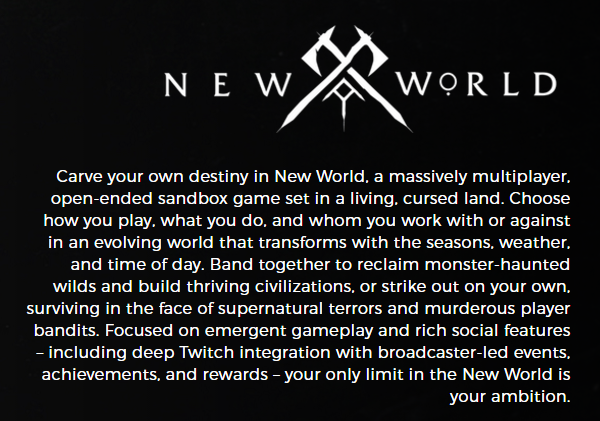 So that kind takes the sting out of the 2016 loss of EverQuest Next, though it’s clearly a very long way from ready.

The studio is also working on “mythological sport brawler” Breakaway, which already has a button for alpha signups and dominated the reveals. It’s basically a four-player, third-person MOBA-lite built squarely for livestreamed e-sports. Those teases over the last week or so? Yep, those were for Breakaway.

And then there’s Crucible, which looks a lot more like a survival sandbox with a Twitch-centric mini-multiplayer mode.

The Daily Grind: What was the most important innovation in MMOs...

The Stream Team: Grouping up for more Zariman missions in Warframe