You know that moment when you’re playing a new MMORPG class and there’s this kind of epiphany? That feeling like a switch has been flipped and all of the originally obtuse mechanics of a class suddenly become crystal clear? Like Neo seeing through the program and into the code, I have had that moment in Torchlight Frontiers with the Railmaster class.

I don’t really know what it was that triggered this moment of realization, but this past week saw all of the weird things I was wondering about last week fall beautifully into place and make sense. I’m not saying I’m the master of the Railmaster, but I have suddenly gotten a lot of confidence in how to make this class work. 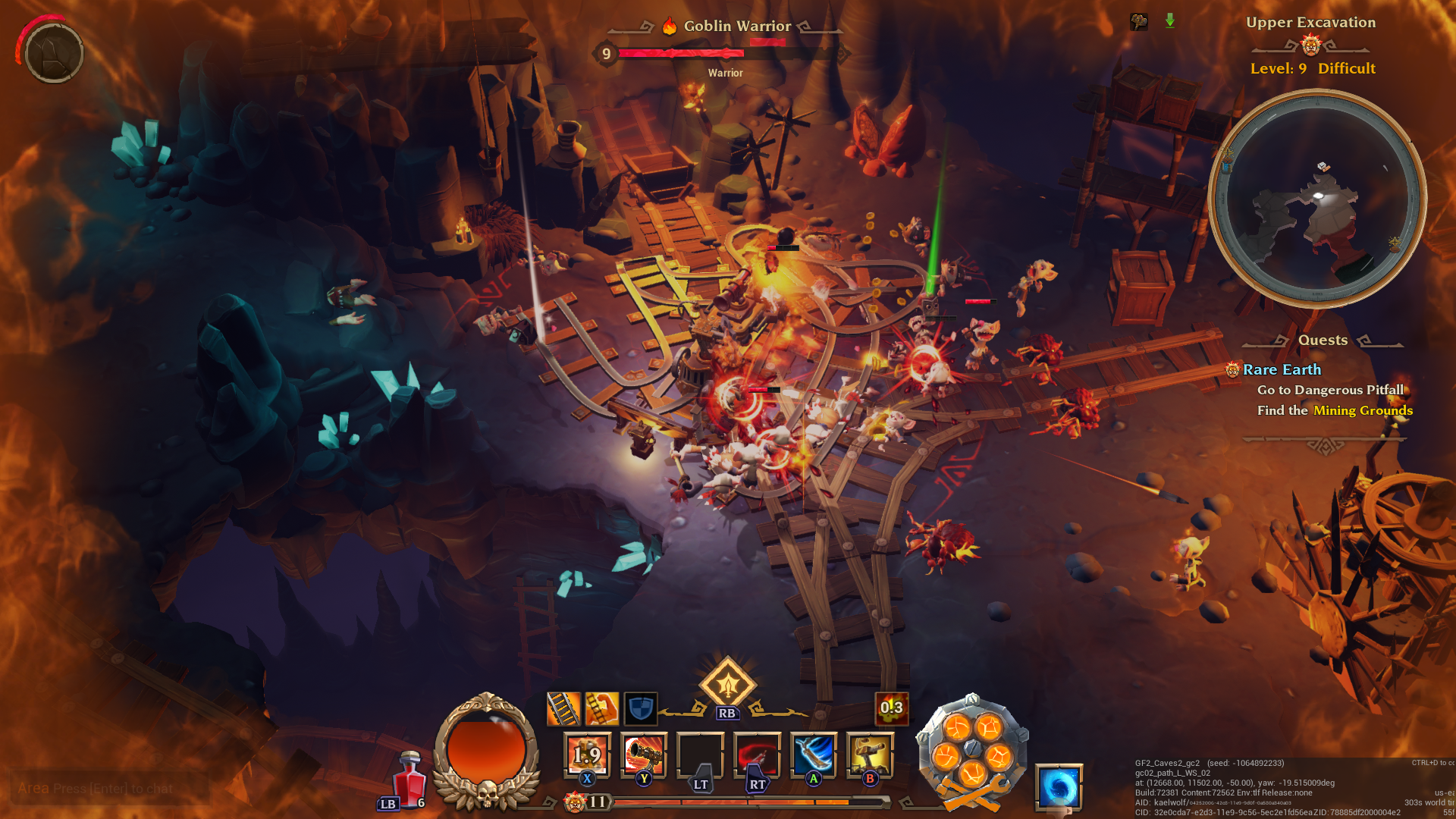 It wasn’t always like this, of course. Once I booted up the game again, I was back to my old weird ways, setting my train and letting it chug along behind me, following the insane paths I was laying down for it while it tried to figure out where to aim its Shotgonne. Poor silly thing.

This was exacerbated initially by the poll’s decision to ramp up the difficulty. For a fair while, things were starting to hurt me pretty handily, but I also kept up my stock of healing potions. I would simply press forward until I noticed my health potions were running low, use my teleport skill to go back to the main town, refill my healing potion stock, then head back and trudge on. I was starting to get worried that Torchlight Frontiers was conflating “difficulty” with “inconvenience,” forcing me to constantly port to town in order to strongarm my way through content by simply making sure I had potions to drink.

At a certain point, I got to the boss of the cavern I was rumbling around in, where I planted my train in place and simply orbited it to avoid taking the massively painful hits that these stone golem creatures were laying into me. It wasn’t terribly exciting, but it was effective. This is how it is, I thought to myself. Cheese strategies and knocking back potions like a vacationer at a bar. 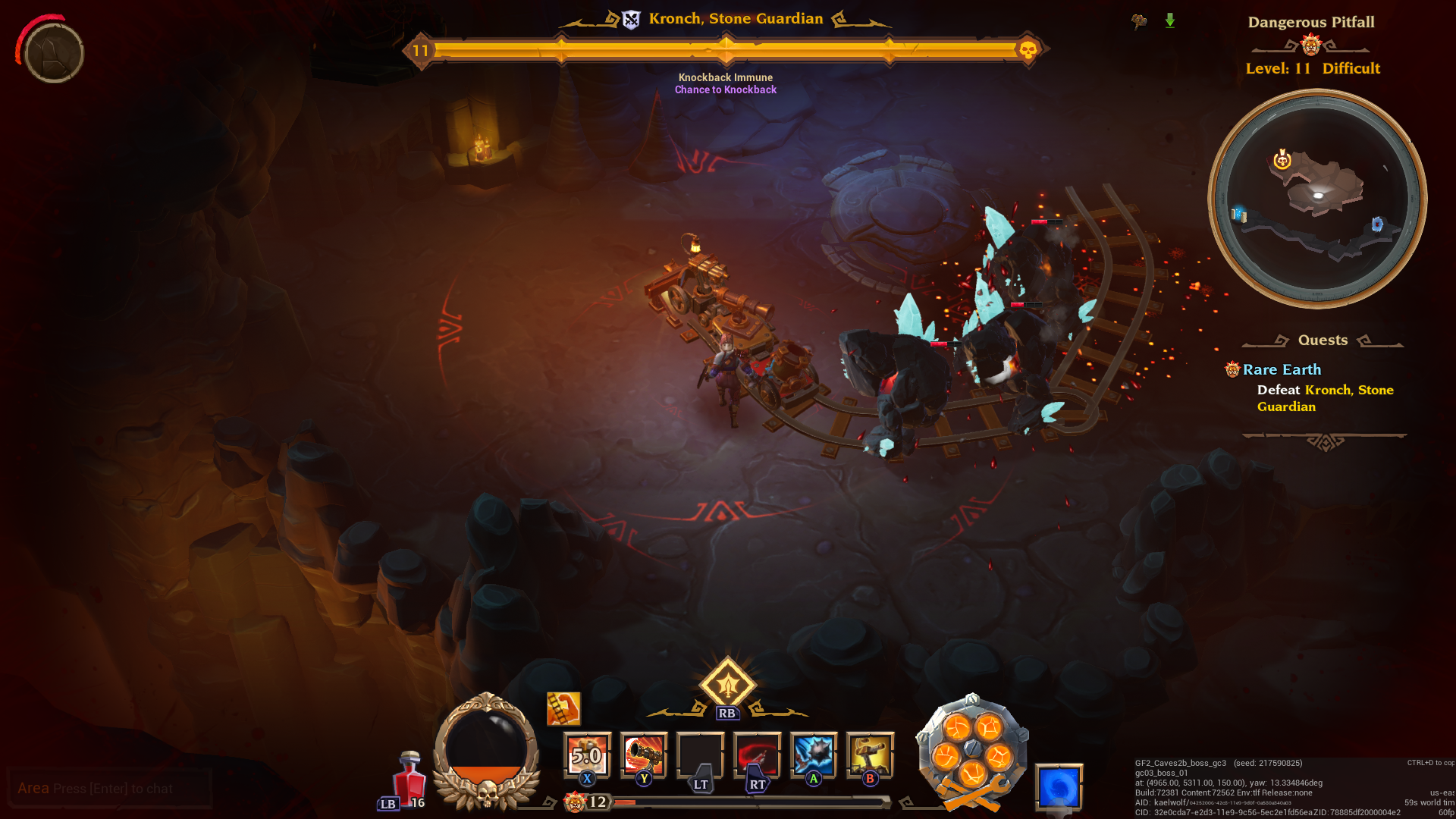 Then, something changed. The difficulty spike caused me to rethink and adapt. The strategy of planting my train while I ran around taking out mobs and commanding it to fire skills may have meant boss fights would be boring, but it worked perfectly for regular skirmishes. Soon, I was making sure I walked in straight lines to be sure my train would be in the best position when mobs jumped out at me. I regularly stopped and started the train. I started to slowly figure out where the Mortar Car’s cannonball shot and Shotgonne Car’s piercing shot would go. It all just started to work. And best of all, I was starting to enjoy myself.

I also think that the latest update to Torchlight Frontiers helped. Before, when I started and stopped my train, there was no real obvious indicator that I had done what I wanted to do, so I had to generally pay attention to whether I hit the B button or not. Now, there’s a hard-to-miss audio and visual alert that I’ve told my train to stop and go, making setting it up where I want it a lot more obvious. The update also added the Luck Tree, which I’m pretty sure is what got me some of the tasty pieces of loot I got. Naturally, this encouraged me to feed the heck out of the tree.

Area after area, fight after fight, quest after quest, I started morphing into a better Railmaster. I still ended up using the cheese strategy for boss fights, but with the added mobs that were piling into those encounters (this game still uses cheap tricks and calls it “difficult”), I at least felt less like I was exploiting stupid AI and more like I was using the tools I had at my disposal properly. 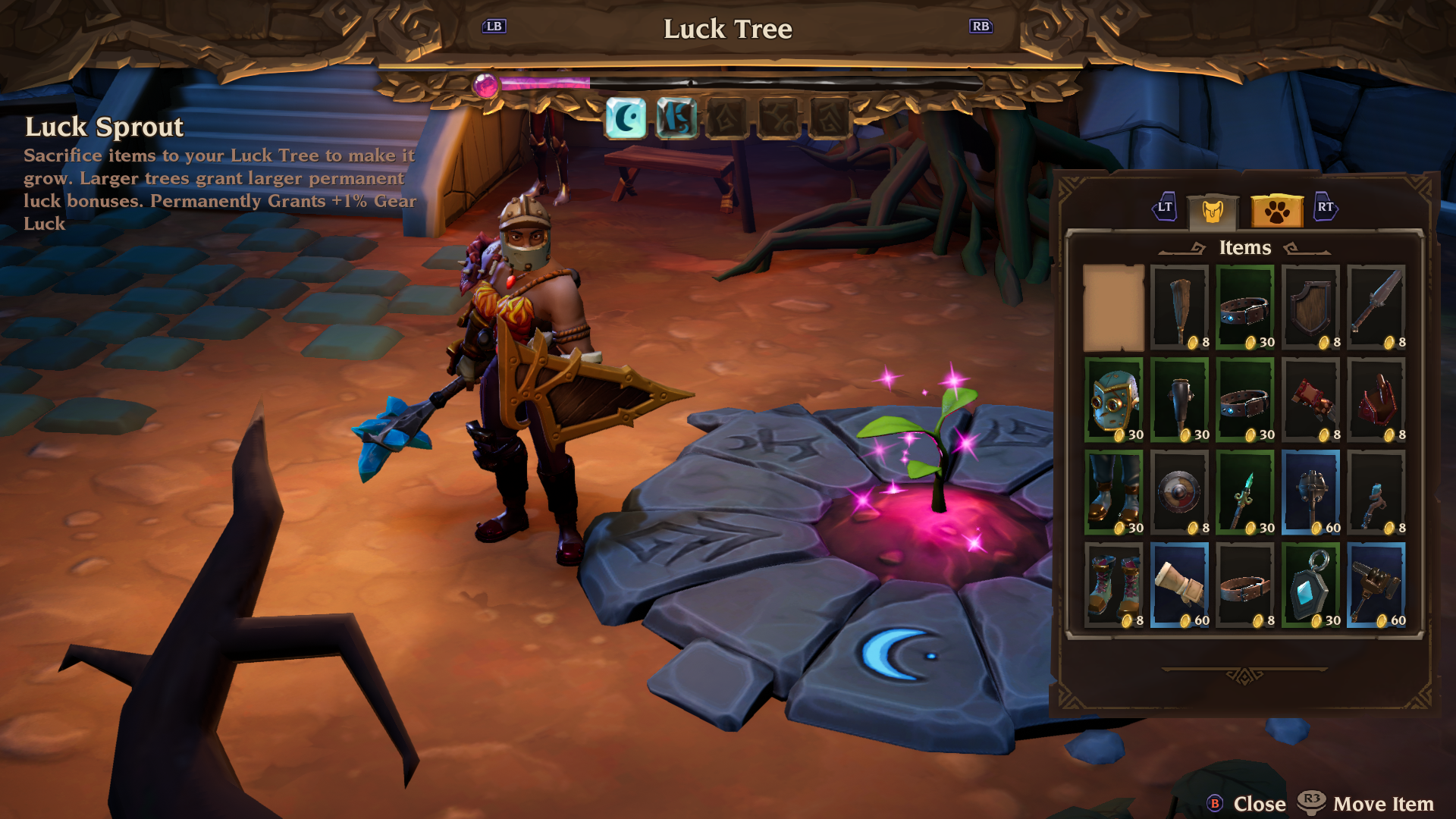 The Railmaster is a lot more tactical than other ARPG classes I’ve played, let along MMORPG classes. It’s not exactly chess, but it is a whole lot more involved than the absent-minded strategies I was using before, which makes it one of the more involved pet classes I’ve played. I really wish that the train’s skills had a little more impact to them, but I have to admit that seeing my proper positioning and accurate skillshots unfold made me feel good. Or, to put it another way, I love it when a plan comes together.

For once in my MMO gaming life, I finally feel like I’m in control of the pet, not the other way around. All of the things that I thought were just weird ended up coalescing into a class that made sense and really made me play the game differently. This sudden sense of control combined with those beefy loot drops to make the raised difficulty less of an ardor and more of a challenge to meet. 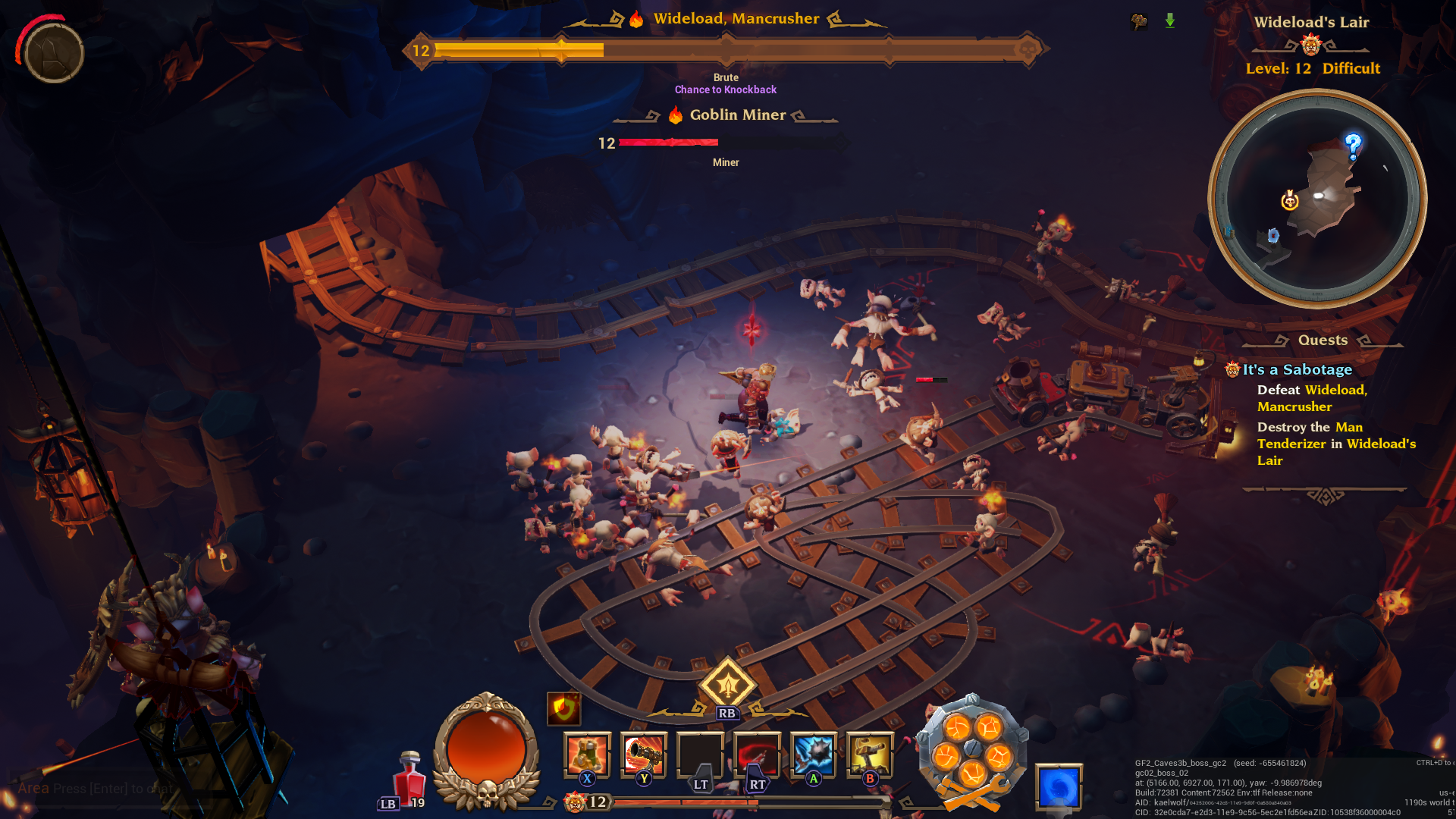 On the subject of meeting those challenges, it’s time to see where my pet train and I will coast along to next. Over the course of my questing, I’ve opened up the Hyvid Frontier, which apparently will have me facing off with some new nasties. That said, I still have lots of areas and questing waiting for me here in the Goblin Frontier, so that makes prime fodder for our first poll!

Which Frontier should I focus on?

Secondly, the update also added the Fame and Reputation systems, with boards full of mini-quests and goodies to unlock. I didn’t bother to follow up on this extra system while I played this week, but I’m open to adding them in to my laundry list of activities if people care to see what that’s all about. So that’s poll two: To quest on, or to follow the Fame as well.

Should I pick up some Contracts and improve my Fame? 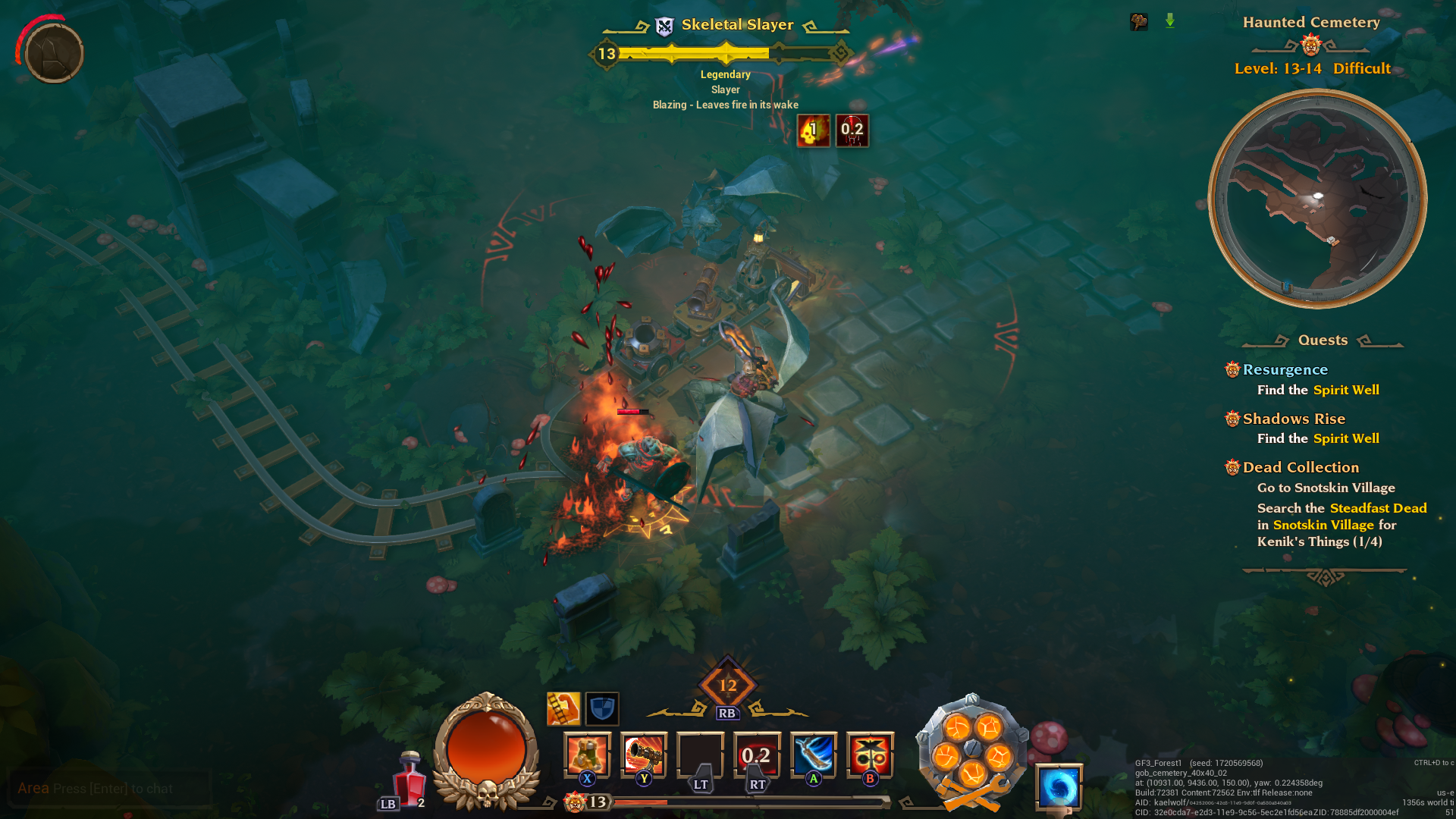 Like usual, polls will close at 1:00 p.m. EDT this coming Friday, October 18th. I’m legitimately looking forward to more. I thought I was going to love the Forged class the best, but I have to admit that I’m starting to fall harder for the Railmaster.

Grab a Eudemons Online lucky media pack in honor of the...