The Goblin Frontier of Torchlight Frontiers isn’t exactly boring per se so much as just… blasé, I guess is the word I want to use. It’s pretty typical stuff in terms of its setting and its enemies. The Hyvid Frontier, then, didn’t really have a high bar to clear, but it still was a breath of fresh air.

In fact, the moment I stepped in to the new frontier, I was greeted by a warning message about it being a tougher region and spoke with an NPC who dropped a load of low-level gear that increased my character’s poison resistance. That definitely set the stage for the rest of my Hyvid Frontier adventure. 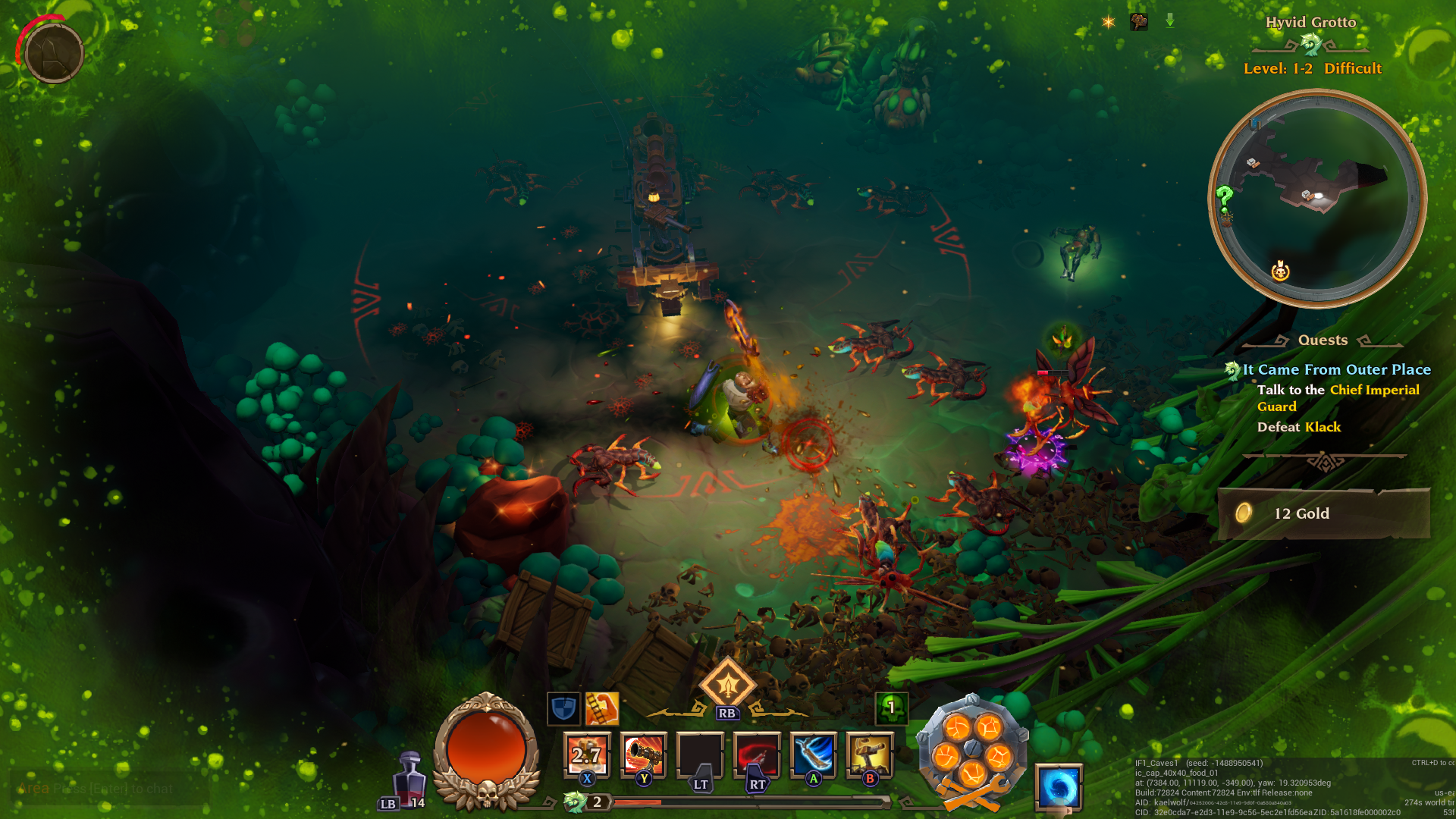 Where the Goblin Frontier was a standard green grassy area with underground caves, the Hyvid Frontier has this sort of thin veil of green fog over everything and most of the plantlife appears to be polluted or affected in some way. Chitinous tendrils and strange, alien-looking plants permeated the area. Interspersed around the maps I explored were poisonous gas vents. Even the goblins in the open world maps were infected.

Of course, the featured creature is the titular Hyvids, which don’t really provide too much difference in terms of enemy variance other than the obvious visual differences and their prodigious use of poison instead of fire in their attacks. Oh, and they also blew up and drop loot real good. 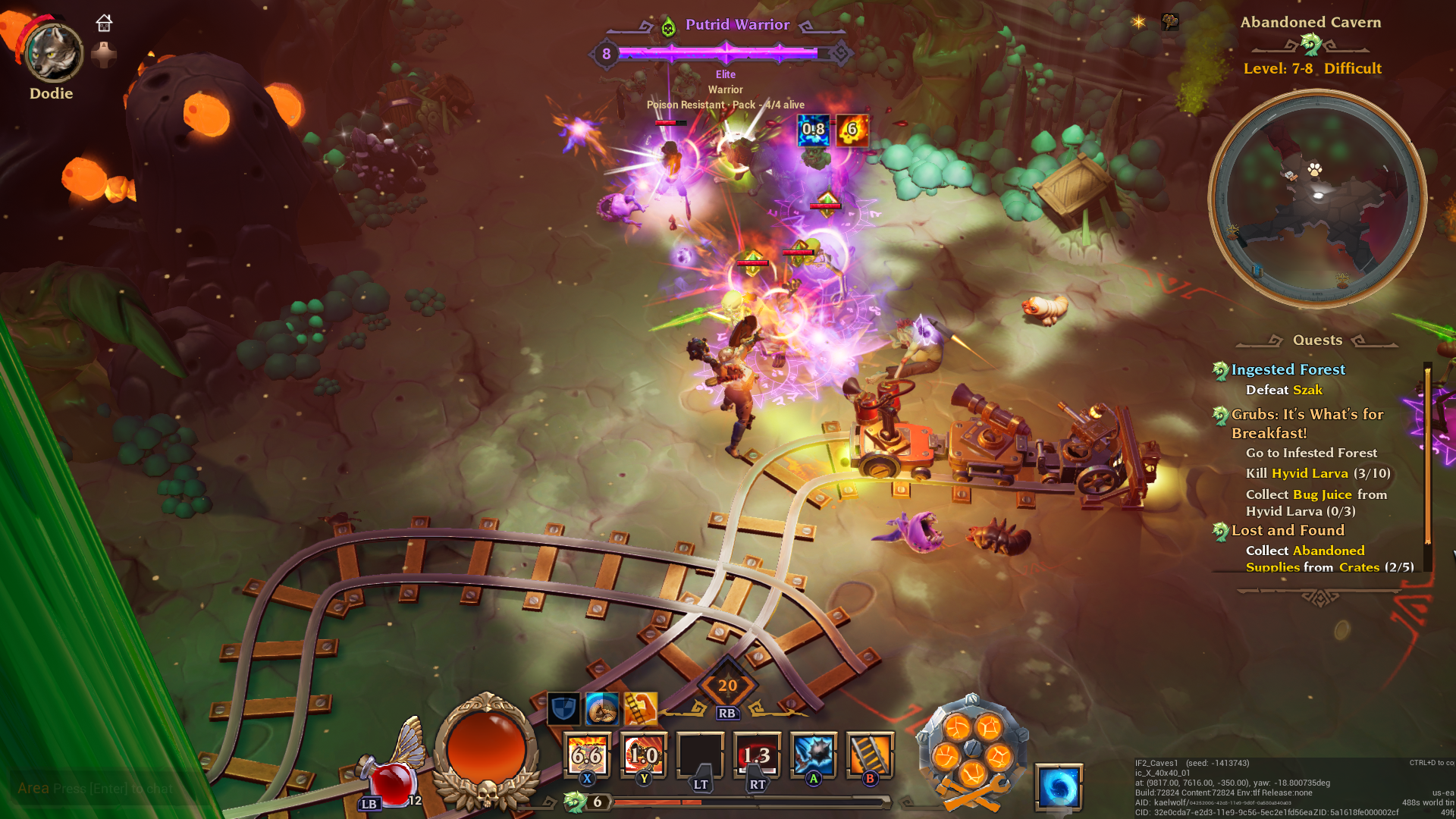 Yep, though the location was visually striking, the second verse was the same as the first when it came to gameplay. Which, of course, isn’t really that surprising and still felt good regardless. Even so, the first cavern I entered provided a new ramp-up in challenge. My very first fight saw me immediately overwhelmed and killed, whittled down by poison and ripped to shreds by Hyvids. Guess the warning window wasn’t an empty threat.

This, of course, meant I had to play a little smarter, but I also had a bit of extra help in the form of the Flamethrower Car. Surely burning things is going to be useful and satisfying, right? Well… sort of.

As with the Mortar Car, it’s going to take some getting used to understand how this particularly attachment operates. See, the Flamethrower Car doesn’t pour a gout of flames in a big wide cone like I was expecting, but in a big long line like… well, actually, just like a real flamethrower does. This either happens on its own volition in a short burst, or on command with a longer, more sustained burn. 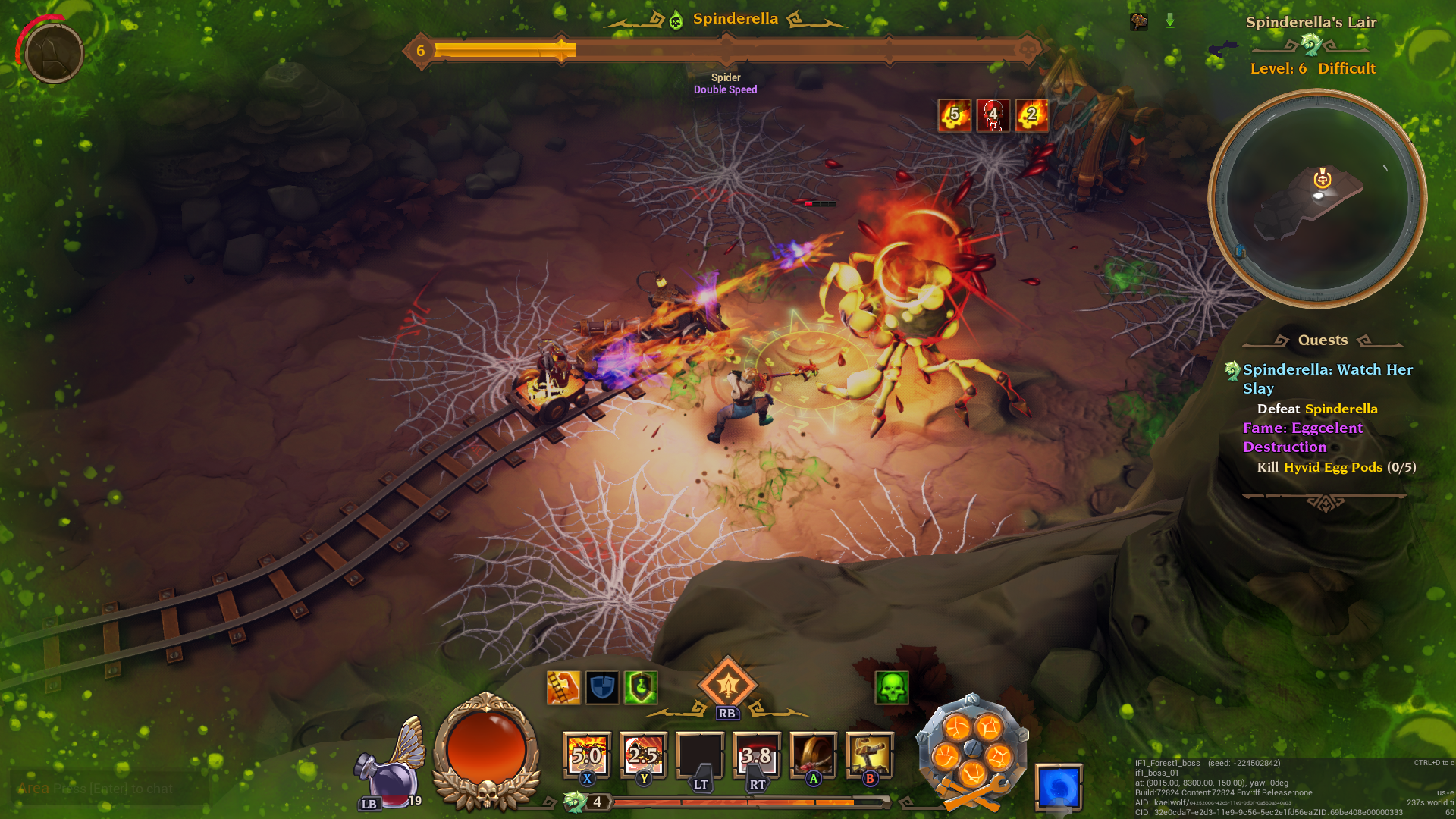 Setting it up should feel great, except once again the lack of any sort of targeting system to tell the car just where to throw its flames very frequently got in the way. Much like the command attack of every other car on my train, the Flamethrower Car’s command attack only fires in the direction you’re facing. This became a little bit frustrating, especially when I had to turn around to run from a wave of enemies, which also had the side effect of making the car uselessly spit fire in the utterly wrong direction.

I was able to adapt for the most part, however. It’s still going to take some time to really get a handle on, but I think I’m slowly understanding how this new attachment is working, and I’ve been focusing my levels on beefing it up further.

Speaking of levels, the way levels work in different Frontiers is a little different than what I expected. I had assumed that, looking at the Hyvid Frontier map, I was going to have to start from level 1 all over again. Instead, the Frontier Level is at level 1, but my character level persisted, as did all of the skills and abilities I had unlocked. This effectively meant that I had to keep an eye on the level range of the areas I moved to but didn’t have to start over in terms of the buttons I was hitting. It’s a nice touch and was greatly appreciated, especially as I seemed to be climbing the Frontier Levels quickly. 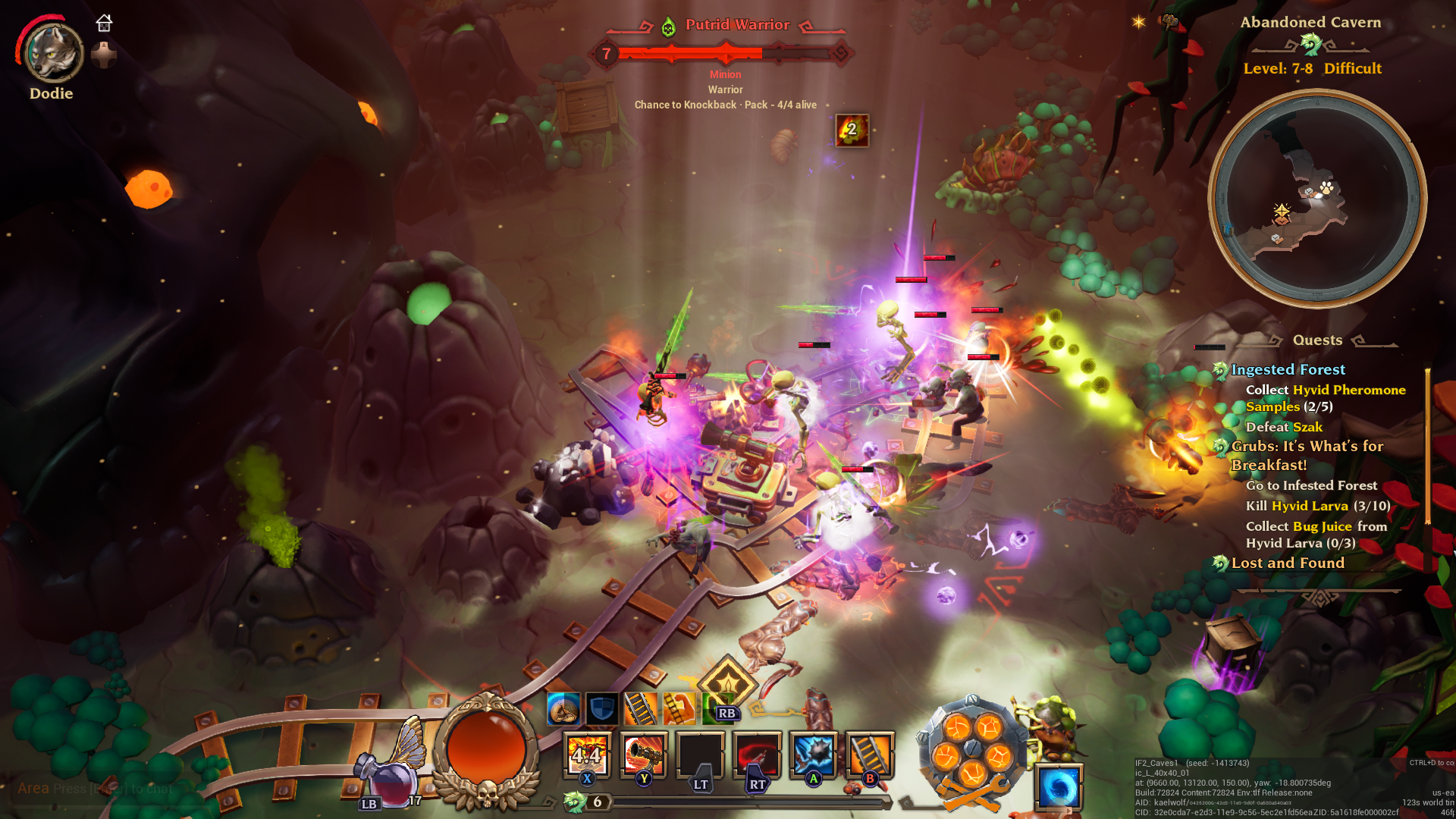 That leveling speed was likely helped out a bit by the Fame Contracts that I was taking up. These little extra tasks to do seemed to work in parallel with the story quests I was already doing, meaning I didn’t exactly have to go out of my way to complete their objectives. Additionally, the rewards track for rising in Fame looked pretty enticing, such as crafting materials, Personal Fort items, and unique pets like this bird-faced dinosaur…thing. I don’t know what it is, but if I ever unlock it, I will name it Whut.

Getting those unlocks seems to be a bit of a slog, however. Gaining Fame via these Contracts doesn’t really seem to move at great speeds, and a lot of the really shiny rewards were further down the track. Ideally, this will be tuned a bit to make taking up these extra quests more rewarding, but the (perceptual) added XP gains and the way they wove in to what I was already doing is certainly convenient. And who knows, perhaps those goodies are a tasty enough carrot for folks to chase. 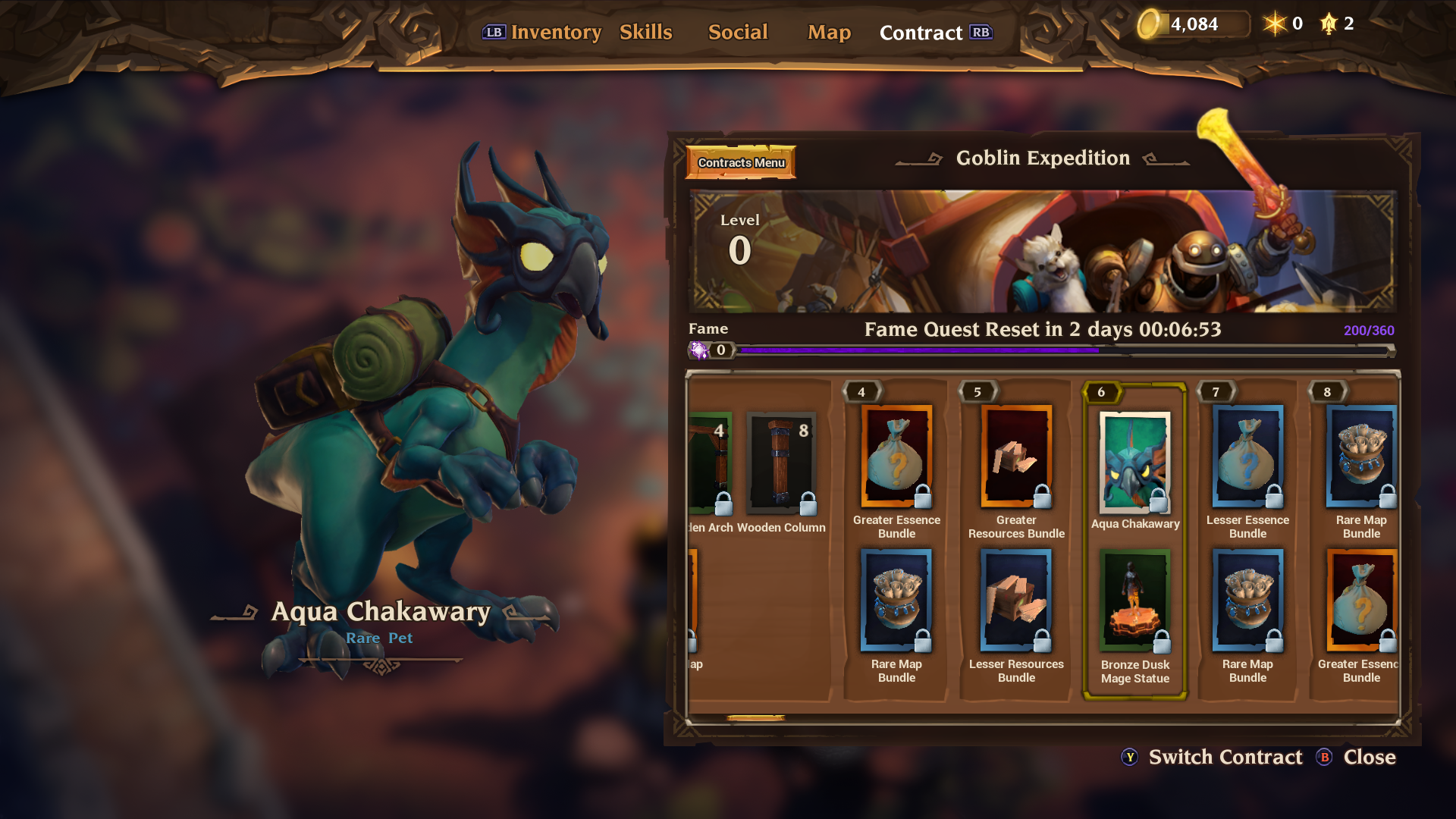 Ultimately, I’m glad I made my way to the Hyvid Frontier, but with one more week left, I think it’s time to settle up our final leg of our CMA journey here. Yep, it’s polls time!

The first poll idea is, admittedly, a bit of a cop-out: It’s the same question I asked last week. That said, knowing that I can basically blip between the Hyvid and Goblin Frontiers, doing Contracts and Quests, while still getting character levels means we have some choices here. So…choose!

Which Frontier should I continue to focus on?

The second poll is maybe a bit more interesting. Now that I’ve unlocked every available skill the Railmaster Train has to offer, I’m kind of considering a couple of build ideas. Here’s what I have in mind:

Which Railmaster build should I use? 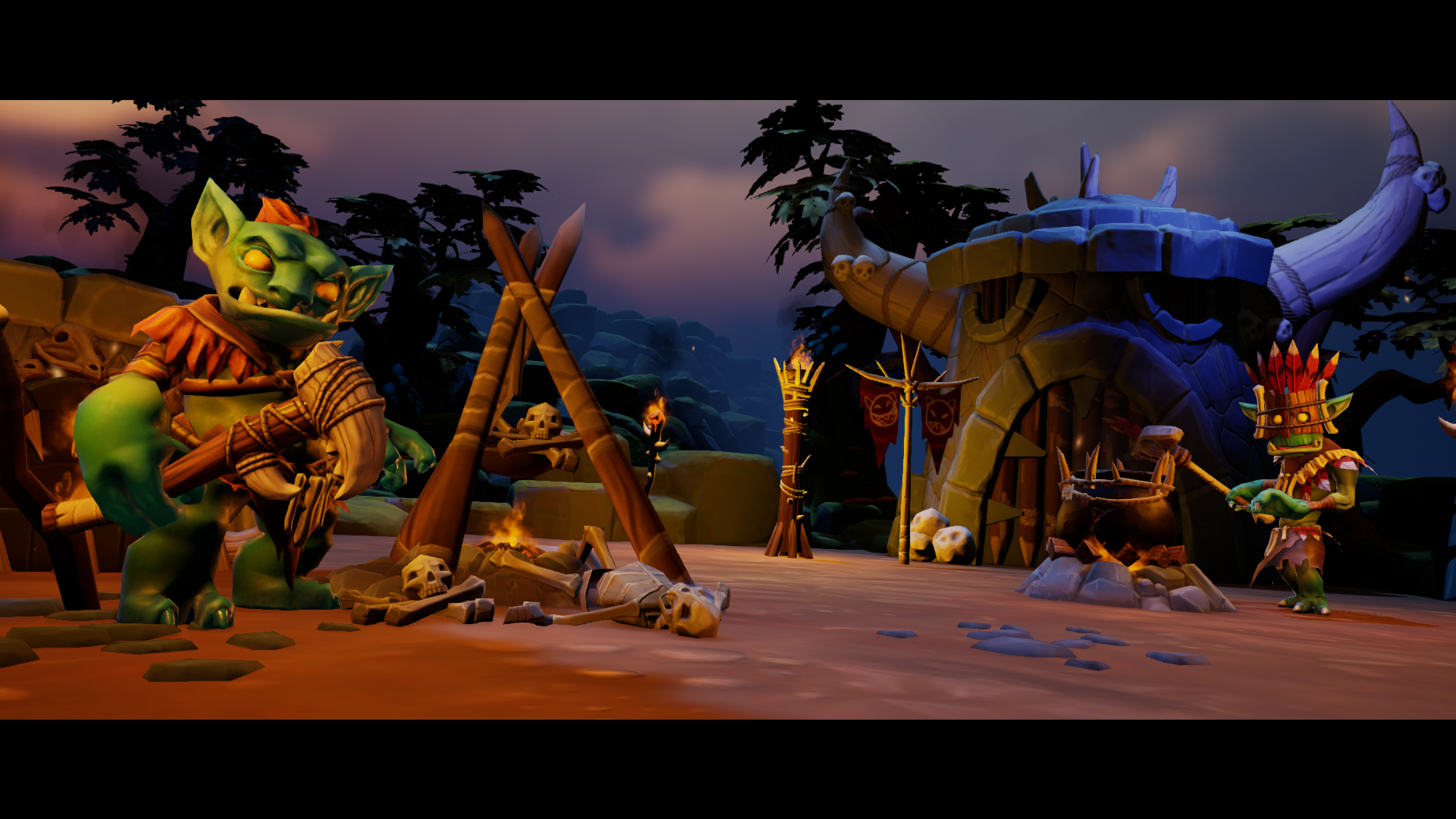 Bree Royce - August 6, 2020
140
NOW STREAMING LIVE ON TWITCH
OFFLINE - SEE YOU NEXT STREAM!
NEXT MOP STREAM
No events to display.

The Daily Grind: What MMO offered the best beta experience?

The Stream Team: The Shroud of SWTOR