(We’re continuing to update this piece on the latest at the end!)

If I had told you last year that GameStop, the retail business that was already struggling even before COVID hampered its plans for rescue, would make headlines in 2021 for a massive stock surge involving Elon Musk, Reddit shitposters, and hedge fund villains, you would’ve laughed at me, and rightly so. But here we are and it’s happening.

Let’s recap a bit. The internet daytraders over on the Wall Street Bets subreddit apparently got a burr up their butts to start pumping money into the flailing GameStop stock, driving it from around $17 at the beginning of the month to over $340 as of this afternoon as I write this. The immediate effect has been to devastate the hedge funds that were short-selling GameStop. 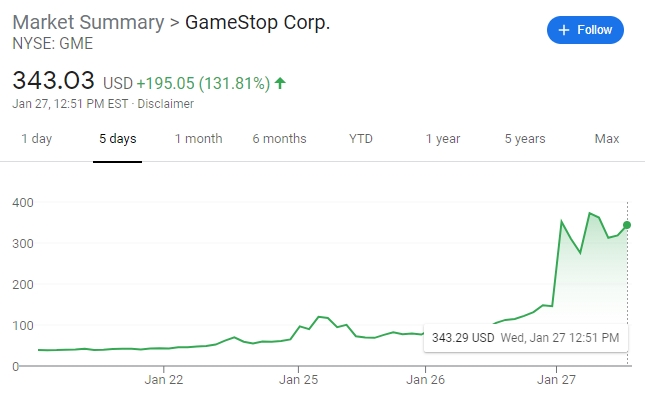 The funds most deeply affected, like Melvin Capital Management, were likely writing uncovered calls for GameStop stock, which is to say, they were betting they’d be able to buy GameStop stock cheaply in the future to cover those calls, which they cannot do without losses now. Melvin’s $12.5B in managed funds was down almost a third and provoked additional rescue investment to combat the short crunch, all seen as a sign by the Reddit daytraders that their guerilla trading is working to defeat whom they see as the bad guys. The situation was compounded today when two of the main hedge funds announced they had covered their calls, which might be true, or it might be an attempt to dissuade continuing buys.

None of this is illegal, mind you, and yes it’s how the stock market has always worked – it’s just some people are just now figuring it out. And they’re currently on Reddit trying to convince each other not to sell or let it all come crashing down. Worth noting is that even if GameStop were a great company to begin with (and it’s not), it isn’t actually benefiting from any of this, since it’s unlikely to have any lasting impact – except for some of the investors who happened to jump in and out at the right time and are now sitting on piles of real money, again egged on by no less than Elon Musk and people on Reddit who’ve been advocating a short squeeze of GameStop since at least 2019.

I am not a professional investment broker, so you should probably not listen to my advice on stock trading. But that also goes for pretty much every other non-expert on the internet, especially anons on a Reddit who may or may not be finding new ways to dupe newbie investors and pump stocks for their own profit. It’s fun to stick it to the worst scum on Wall Street, but do make sure you’re not the dupe left holding the bag when the pump is inevitably over. 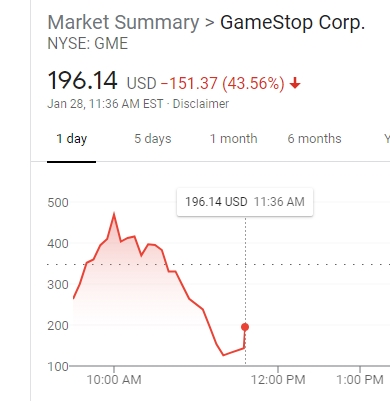 The WSB subreddit is on fire, talking class-action lawsuits and begging Canadians to help.

Politicians are getting pissed too. 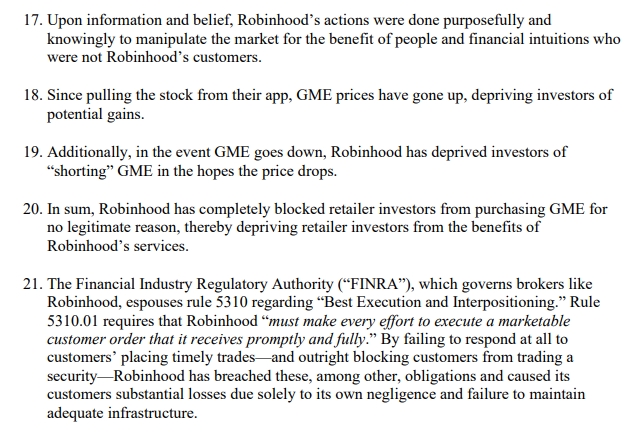 Let’s note also that Robinhood – suspending activity on gme trades – also happens to have Citadel as a major investor.

Citadel has/ had major short positions on gme.

But I’m sure that’s coincidence.

Note: For anyone speculating that congress will make this sort of thing illegal, they don’t have to because it (subject to some interpretations) probably already is under section 9 of the Securities Exchange Act of 1934.

Actually tracking down and prosecuting people who put a couple thousand bucks in this isn’t going to be worth the SEC’s time and effort. But any large transactions are probably going to be looked at very closely. And I hope the mods of WSB (for their own sake) were very careful in wording any posts they made regarding the situation.

Conspiracy to buy stocks?
Honestly, Id rather they go after the shorters.
More shorts than shares outstanding is just asking for volatility.

No, conspiracy to manipulate stock prices per section 9(a)(6)
————-
(a) Transactions relating to purchase or sale of security

On the side though: AOC telling Ted Cruz to go stuff himself kinda made my day over this… <3

Class action lawsuit has been filed against RobinHood for restricting buys but not sells. And while those restrictions are helping shorts, the shorts are doubling down.

I like how yesterday it was all about reddit manipulating the market and how awful that was and today Robinhood pulls out the hold my beer line and some of those same people think its fine.

BTW, i don’t recommend anyone to check Twitter about this. At least on my TL, most of the people ( who tend to be left-minded ) are cheering on this like it’s some sort of victory, and saying “i will not sell” with pride. So many of them poor people with good intentions not realizing they’re being manipulated by trust fund babies and malicious assholes.

It’s really sad and i felt myt heart break at this. Manipulating outrage became this easy.

As a Brokerage I would think it would be a good idea to continue the trading of these stocks. I can only assume A LOT of people are looking for a service that will allow them to get into $AMC or $GME

Yep. Fundamentally, these stocks have about as much actual value as a BitCoin at this point, i.e. functionally zero, but worth whatever someone else is willing to pay for it.

This has been so interesting to watch. Gamestop is done for regardless of this stock war, but I love seeing these hedge fund jerks get some comeuppance from the Redditors involved with this. This is laying bare underlying issues with the entire system that many of us have been complaining about for years.

If you got in, now may be the time to get out. Most of the brokerages are flat out stopping retail investors from buying shares, which naturally caused a panic and the price to plummet. So basically they manipulated the market, the same thing they’re accusing a bunch of reddit trolls of doing. As always, rules for thee and not for me.

This is so fundamentally unfair I can feel it in my bones.

There is nothing I have ever known in my entire life other than the establishment always wins.

You’re not wrong – I just expected it to win by outlasting, not by cheating.

You and I came to very different expectations then.

I expect the “establishment” or “system” or whatever people want to call it will always do whatever moves it can (rewrite rules, come down hard on people, pressure other organizations, etc) in order to protect itself.

Edit: To also clarify I don’t glorify or enjoy that aspect, it’s simply a fact to me. I’d love for it to change much in the way I’d prefer unpleasant weather to change.

I guess I’m more surprised about the blatant cheating in context. Usually the cheating is subtle or oblique. If the billionaire class wanted to enflame the smoldering class war and enrage Xennials, this was a good way to do it. I guess I should be grateful they’re turning a bajillion stockbros away from worshipping naked capitalism.

I prefer the capitalism I worship to be really well dressed.

And I prefer the socialism I oft toot to be several degrees above this. Time to put the dog back to wagging the tail, I’d say. >.<

Usually the cheating is subtle or oblique.

Usually it doesn’t have to be overt, but if directly challenged I never doubted for a second they would just blatantly outright cheat, change rules or rig the system. The only reason this even occurred in the first place was because the place fucked up and didn’t buy it over the counter and so they had to register it for other people to find it.

My current thoughts these days is that much of the way companies hold power over their areas is by creating rules they selectively enforce. Wouldn’t surprise me if they create some sort of new rule over all this that they enforce for the lowly plebs but just kinda overlook or don’t enforce for the billionaire class.

It’s not overt but it’s not hidden either. It’s just tolerated as normal because it’s normalized by decades of growing the populace accomodated. The way the wealthy behave and grow wealthier should be met with outrage that would put the French Revolution to shame, but it’s not.

I think it’s possible that the cheating in this case may have some unintended consequences for the billionaire class down the road.

Heh, I had to look up “Xennials” — good thing I am just a few years too old to qualify or my Milennial daughter would have a label to drop on me.

According to the article Melvin Capital has exited Gamestop – which means that establishment lost. So its not really true that they always win.

I was using this whole thing as a way to try out investing (closer to gambling in this case), and I came out very well ahead for what I put in, but I have such a foul taste in my mouth now that I’m just taking my money and walking away.

im probably wrong but it feels like once the smoke clears somebody is gonna get in some sec type whitecollar paperwork shenanigans trouble for this.

hopefully the kids that bandwagoned had the disposable to ride it out.
buncha cats are gonna get glassed.