As readers may notice in our Pokemon Go coverage, we frequently ask PR for clarity on various announcements. While we can all appreciate not wanting too many spoilers, many of the requests are to clarify news and contest rules that can affect the community in ways Niantic hasn’t clearly communicated.

However, a recent Russian promotion to add more points of interest to Niantic games was one such area that many people missed. This isn’t the first time Niantic has run this sort of event, as the India region previously held a similar one. One addition, however, was that the company allowed people to modify their “home” or “bonus” location to contribute to the target area for people living abroad. While the company made its target, many players noticed their efforts didn’t result in rewards. While the company looked into it, players were told that there was a non-communicated additional rule and that the company would not honor the original ruleset, which could have legal ramifications at least in the UK.

The original promotional post gave players until June 16th to review submitted points of interests on Niantic’s Wayfarer site, which is used to assist the game maker in populating the game world (which may create legal problems for the company and/or users). As you can see, while the goal was to get more Wayspots accepted, nowhere does it say that the participants need to have the Wayspot they contributed accepted. It’s a collective group effort, much like many advertised goals in Pokemon Go and Ingress. 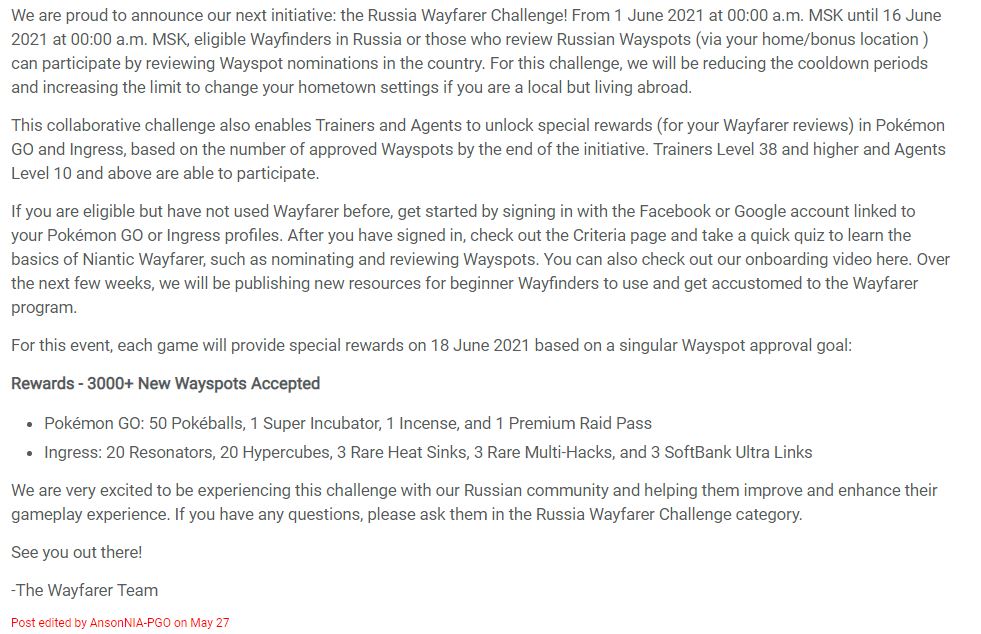 However, NianticGiffard eventually clarified this stipulation – five days after the event has ended.

This effectively gave participants who were unknowingly left out no time to rectify the error. While I had personally seen the promotion, I had not passed it on to readers as it was aimed at Russian players, as Niantic specified that it was allowing players to change their home/bonus location if they were “a local but living abroad.” As certain groups’ fans were pushing for participation by non-Russians, it seemed best to leave this promotion out, but readers reached out to us with complaints about Niantic reneging on the rewards. Niantic at this point has closed the thread, which contains players’ personal evidence of having participated in addition to Giffard’s noted that while he was personally disappointed about the results, he could not “promise the addition of further rewards” for those the company left out.

In addition, the sudden requirement that the point of interest had to be accepted during the campaign for individual rewards is unique to this event. The India campaign rewarded players as a whole, except for those outside the country who got minor rewards, and we were unable to find complaints of them not receiving rewards. Poland had a similar campaign, but the complaints didn’t make many waves, possibly since there were also public rewards (which apparently weren’t limited to participants).

As the Russia event gave out private rewards, not receiving said reward stands out, as does Niantic not honoring it. While we’ve asked PR for comments from the company, we have yet to receive anything as of this writing.

It should be noted that as per the UK’s Advertising Standards Authority (ASA), “Promoters cannot change terms and conditions part way through the promotion, or create and enforce T&Cs retrospectively.” As this change came after the promotion, it really seems outside the safety zone, especially as Niantic offered digital rewards which should fall outside the normal rules for handling unexpected events.

7/27 Update: Niantic has posted a review of the event. We’ve reached out to several sources who complained about their results prior to Niantic locking the complaint thread, in search of contrary evidence and will update this piece should we find anything.

7/28 Update: As you can see in the above link, many players are saying they already showed or simply do not have evidence of their participation. We followed up with several people who had complained in the original thread and had picture evidence via the unofficial Wayfarer+ extension (which you may want to grab if you intend on giving Niantic more free work). The thread has many examples, but here is one we received:

Thus far, two people we reached out to directly confirmed they had not received rewards as of now, and one sent us review logs matching their screenshot. We’ve reached out to Niantic PR for further clarification and will update this piece should we learn more details.

With thanks to Vishal and Steff for the tips!
Advertisement