I’ve been struggling to come up with a succinct way to describe Eco. The game was recently the subject of a Whatever Happened To entry on this very site, an article that coincidently went live the same day I purchased and started playing the game with an established online community. My initial impression of the game was that it’s Minecraft on steroids, but after more playtime, I feel that term doesn’t do justice to this little-known gem. I’ve been trying to come up with a better description ever since.

A little backstory: In 2015, Eco doubled its Kickstarter goal of $100,000, and while this sum is a far cry from the totals raised by more famous personalities, it was enough to get the project going. And it’s still pushing ahead today as an early-access title on Steam.

So what is it, exactly? It’s a building game. It’s also a sandbox, but not exactly. It’s a survival game, but you need to work together with other players to do so. It’s an ecology simulator. It’s a civics lesson. It’s a study of human behavior. It’s a player-run economy. It’s a classroom tool. It’s an addiction. Oh, and did I mention the world you’re creating will be struck by a meteor? Unless you progress to the point that you can counteract it and don’t destroy the environment in the process, of course. And while it’s not exactly a traditional MMORPG, it does allow for the use of small-to-mid-size private servers (like Minecraft) with a one-time purchase price. 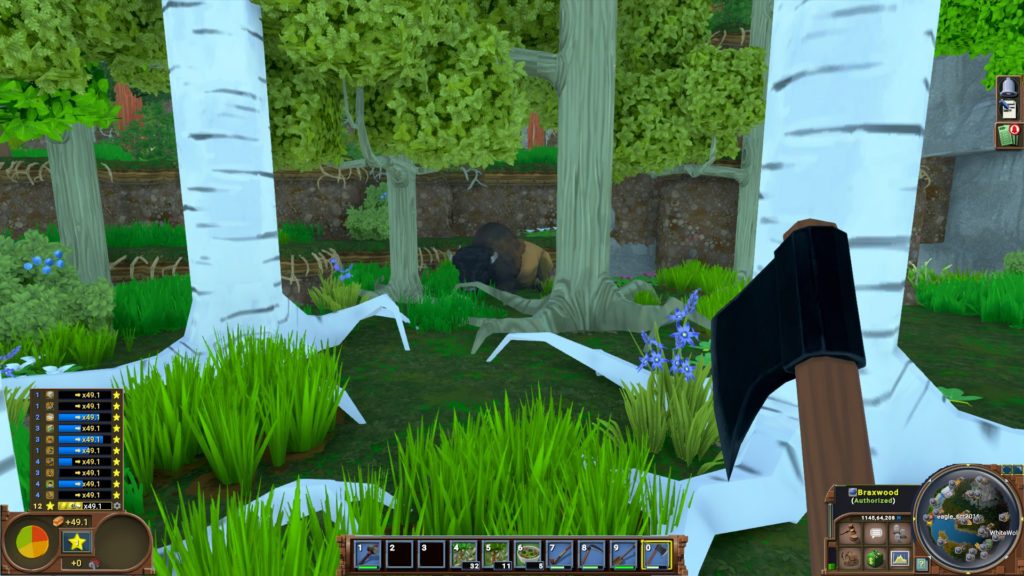 Eco was originally envisioned as a tool to teach kids about the impact human actions have on the environment. In fact, for a time developer Strange Loop partnered with the University of Illinois for prototyping, project direction, and ecosystem design. This influence is still clearly seen within Eco, as the environment is the key component around which all other systems revolve. Actions have ecological consequences. Chopping down trees and building factories increase CO2 and cause the sea level to rise. Over-hunting a certain species can have ripple effects on other animals and biomes throughout the planet. Even trampling around or leaving logging debris lying on the ground can change the presentation of the environment. All of these implications can be tracked with charts and graphs made available via a web service that runs on the same server as the game world.

It’s with this delicate balance in mind that players set forth building a civilization with one another, using the natural resources of the planet to advance both individually and collectively. The negative effects of progress can be combated somewhat. Logging yields seeds that can be used to re-plant trees. Organic material that might otherwise be considered waste can be composted and used to make fertilizer. Laws can be proposed and enacted to protect plant and animal life.

But while the balance of life must be preserved, at its heart Eco is a cooperative game about progress. 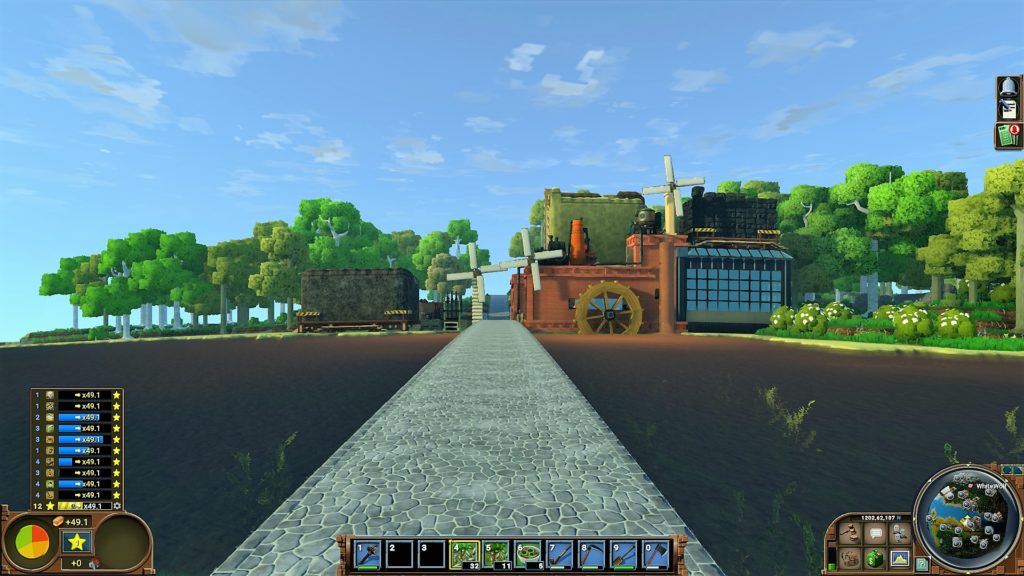 Indeed, if everybody on the server decides to remain isolated, chances are that society will not be able to progress to the point of becoming technologically advanced enough to shoot down the approaching meteor. Therefore, the game is equipped with a complex economics model that is easily accessible to low-level players (the “store” counter can be crafted at the very first workbench) and can progress from a barter system to a global currency-based model as players advance. That is, of course, if someone builds a bank.

One system that was recently added to Eco involves the creation of laws and government. Players can collectively decide on a constitution that determines how laws are proposed and approved. Once we had our constitution drafted, I proposed an experimental law that would protect a certain species of tree from being harvested for wood. Depending on the laws proposed, players can change how the game rules work on the fly, so once my law passed, any player who attempted to chop at one of the protected trees was met with the system message this tree is protected by the old-growth redwood protection act. The game no longer allowed any harm to come to the tree. Other enforcements, such as fines, are also possible. Laws can also be used for such things as creating districts (where laws specific to those districts can then be created) and official government positions (with pay!). 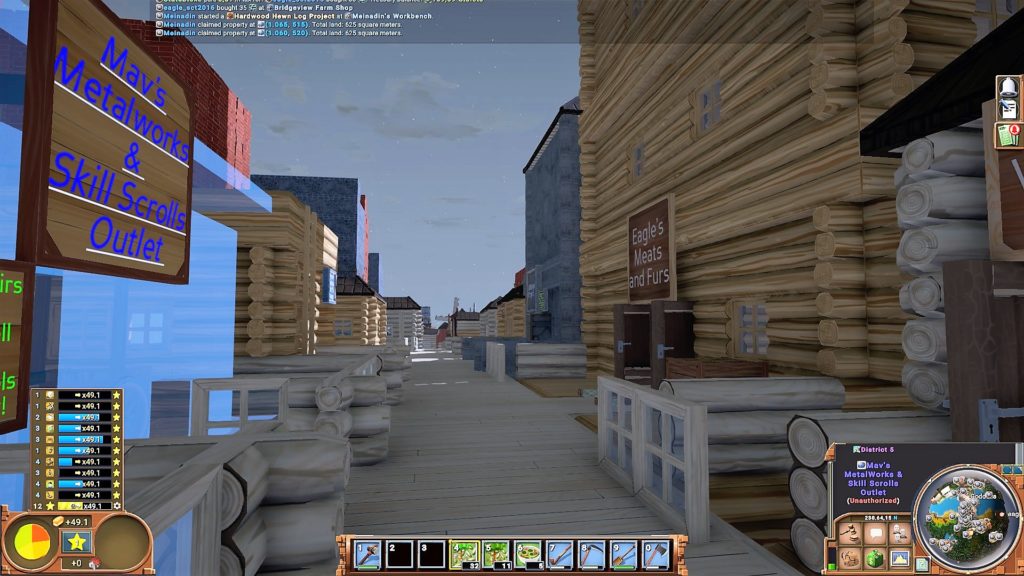 It seems strange that I’ve gotten this far into the column without even mentioning building or crafting since, at first glance, you could be easily fooled into thinking that Eco is a Minecraft clone. While they’re certainly an important aspect of the game, crafting and building are more a means to an end, not the end-goal of the game itself. Early on, you craft to survive. In the mid-game, you craft to make money and build infrastructure. Later, you craft in an attempt to counteract the meteor. But while building and crafting are typically the day-to-day tasks you do to propel the game forward, they seem to get lost in the larger purpose at times, and that’s a good thing in my mind. One of the reasons I never played Minecraft was that I could never get my head around the “crafting for the sake of crafting” mentality.

The crafting system in Eco is all about specializations. Anybody can do the basics of a profession (hunting, gathering, farming, logging, campfire cooking), but XP stars must be spent in order to specialize in one or more of these skills. Skill lines do not progress unless a player has chosen to specialize in that specific line. The further a player progresses within a skill line, the greater the variety of things that are craftable within that line and the less effort it takes to craft them.

Since I lived in the woods, I specialized in logging and carpentry. I can craft a load of lumber or a birchwood bench with the best of ‘em, but my cooking is pretty much limited to charred campfire beets. Therefore, it’s important to get the economy going early. Players will collectively progress more quickly if they’re trading their specialty goods for other players’ specialty goods. 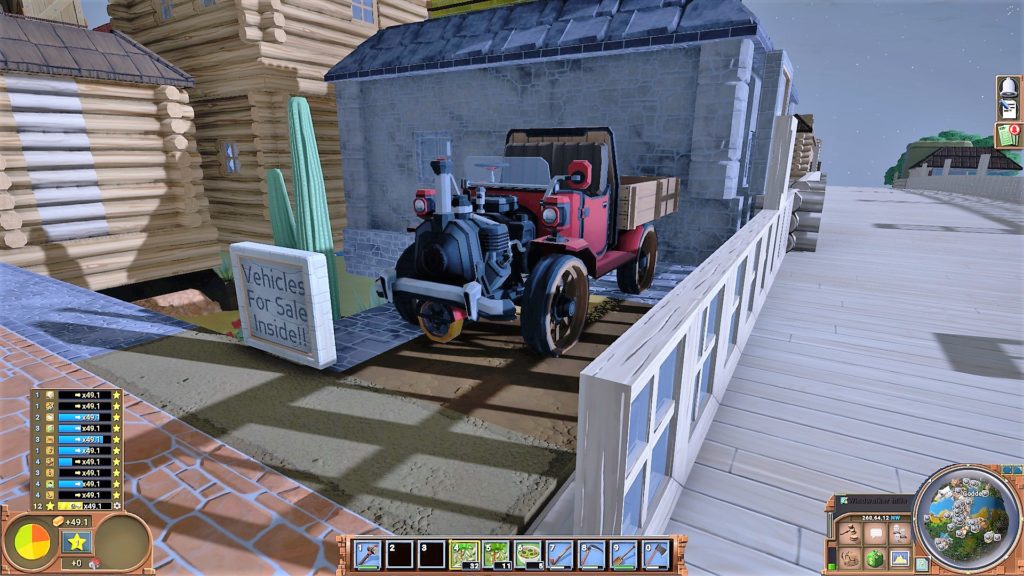 While Eco has impressed me with its overall vision and the level of detail to which it’s gone in developing systems to enhance the realism of cultivating a society of individuals, there are a few negatives. For one, it’s very GPU intensive. I had no issues running it on my Nvidia 2080 Super, but my son wasn’t as lucky with his 3-year-old Dell laptop. He experienced several crashes prior to manually tweaking the graphics settings downward.

Also, the behavior of the animals is wonky. Deer roam the streets in town. One animal occasionally inexplicably multiplies into three. At one point, I witnessed an alligator flopping on the beach. Its final flop was a transformative one, as the alligator mutated into a turtle before my eyes!

In one of the more humorous episodes, one of the farmers on our server logged in to notice that his tractor was missing. With object permissions, stealing someone’s tractor wasn’t a possibility, so the mods ran a command to track the object and found it at the bottom of the ocean, without any explanation of how it got there. The game just transported it there for no reason! I’m hoping that these issues, especially the performance issues, are mostly a symptom of the game being early access and will be tuned as time goes on.

While your mileage with Eco will depend largely on how well the group of people on your server try to work together, I found the game to be a charming little surprise. It’s so different than most multiplayer sandbox games in what it’s trying to accomplish, and you can tell that the educational foundation is still there. But Eco has long since outgrown simply teaching us about the environment. It has branched into economic and legal systems that tap into how groups of people interact with each other, work together, and try to accomplish goals. I look forward to watching this one grow up!