A while back, we did a Daily Grind on which MMORPGs we played most excessively, and one thing that I pointed out was that I didn’t keep data for some games; I relied on those games to tell me how many hours I’d sunk into them, and if they sunsetted, they took that information with them. 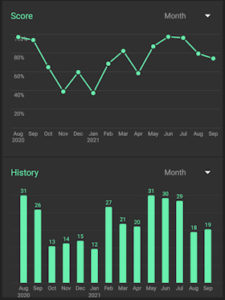 But the last few years, I have been tracking my gaming time more generally, along with a lot of other things, partly to keep myself accountable for habits I wanted to harden and partly out of curiosity to see where the patterns in my life existed. For example, I found out that while I’m super busy on Mondays, I am actually in a pretty good mood on that day because I like this job and I like getting to hang out with the people who do it and who comment here! Thursday turns out to be my worst day of the week, every single week.

More on point, the tracker I use makes it really easy to see which days I made my personal gaming quota. I can look at my tracker and see which months I was spending less time in games, like last fall and winter, when I was spending most of my time working on buying and moving into our first house and everything that entailed. I can also see spikes in playtime, such as the couple of months right after Bespin came out and I was obsessed and played basically every single day.

Do you keep track of your MMO gaming time, and if so, how? Or is this just information you don’t care about and don’t need to know because you play when you want and aren’t going to let a mental quota get in your way?