END_OF_DOCUMENT_TOKEN_TO_BE_REPLACED
I might be a little tardy in doing this, but every spring since I started to write about Lord of the Rings Online, I’ve done a column in honor of the game’s anniversary. When I began, LOTRO was only a few years old; now it’s two years shy of a full decade.

In the past I’ve discussed the history of the game and some of the grander milestones, but today I’d like to engage LOTRO’s anniversary on a smaller, more personal level. As with many of you, I have a screenshot folder that is practically bulging with pictures taken of my adventures over the years. While some of those are just pretty vistas, others have significant stories attached.

So I’m going to share eight of those pictures with you, starting with the header up there. Back in the first few years, there was nothing as breathtaking — or screenshotted — as the descent into Rivendell. It’s definitely long in the tooth today, but I’m still impressed with the tranquility, beauty, and design that the devs conveyed in this remote outpost. 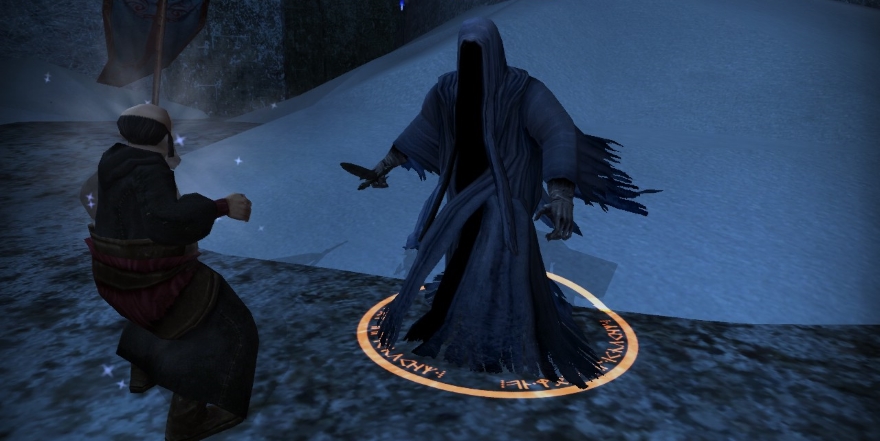 I’ve been playing a Captain ever since I picked up the game. It was such as awesome hybrid class that got a pet to boot. Standards? Get those things out of my face; I always had and will always have a follower out to assist me.

As such, I’ve gotten attached to my heralds over the years. This guy, who I always called Friar John, was one of my first — a brave, dumpy, balding man who nevertheless stood up to some of the greatest evils that Middle-earth has ever known. He got replaced with an Oath-breaker (because how cool is it to have a ghost follow you?), which in turn got replaced with a Shield-maiden when I couldn’t take the ghost’s heavy breathing any longer.

When I see this picture, I can’t help but think of the zillions of times that I ran through the Archet tutorial zone back before it got streamlined. On a good day, I could blitz through the quests in about 45 minutes, having memorized every step of the way. Oh, the newer version is objectively better, but I have nostalgic pangs for the longer version of yesteryear.

The epic story has had its highs and lows, but one part that will always stick out to me was this wake in Evendim. Listening to the NPCs tell stories of the fallen and helping to construct the cairns left an impression upon me. This was more than a game right then; it was a living, breathing, groaning world.

One little detail about LOTRO that always impressed me is that the enemy groups aren’t always portrayed as purely evil doombots waiting to ambush you. Some of them, particularly the human camps, have little moments like in the above picture where you can see them as people living lives, just perhaps on the wrong side of the line. After all, how many other MMOs will show you the bad guys crooning a ballad over a campfire?

LOTRO’s haunted burrow will forever be one of my all-time favorite Halloween instances. It might have been small, but the sheer detail and creativity on display in this space made me spend days upon days fooling around in it. Yeah, it was probably bending lore to even exist, but it was pure Hobbity fun, so nuts to that.

I’ve had many odd experiences in LOTRO, perhaps none stranger than being transformed into a chicken and challenged to go on an epic journey that would rival Frodo. When you’re a critter with no attack, a handful of hit points, and only a couple of useful skills, the entire world becomes a much more scary place.

I had good intentions of beating the entire chicken questline but got pretty frustrated toward the end during some of those marathon runs. Oh well, at least I got a taste of the poultry life. 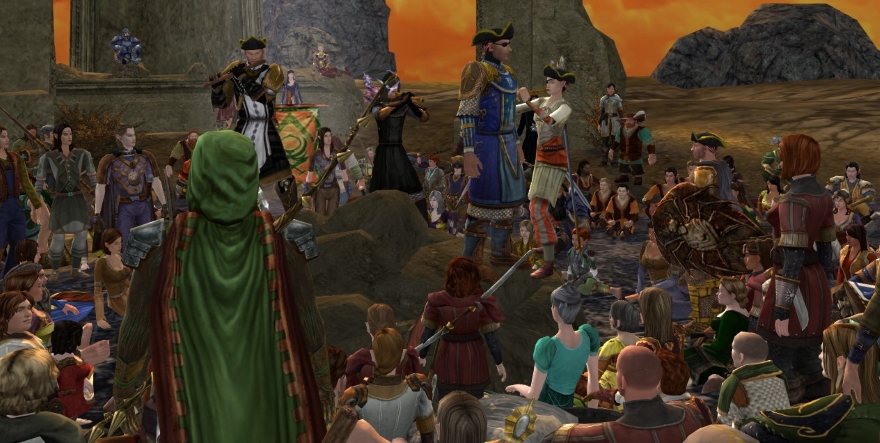 Lord of the Rings Online has been one of the most social games that I’ve experienced with not only a vibrant roleplaying community, but a talented musical one too. Getting together with hundreds of other players to listen to Weatherstock on a yearly basis has become one of my annual highlights in the game. I’m always amazed at the inventiveness that’s on display with what few tools players have with which to work.

Eight years, eight pictures, but by no means everything that I have to share. What are some of your favorite memories?

cromahr Forochel blew my mind.   They really amaze me with how well they realize things you’ve only seen on Tolkien’s map of middle earth.   They made those places real !!

Still a great game, started a new character on Brandywine, which is decently populated.   I will worry about moving my level 65 when it becomes free, or they merge me off of Silverlode.
Enjoying some of the new changes and little efficiencies, like the easier looting.

shayneary Which server are you on? The more populated ones (Gladden, Evernight, Landroval, Brandywine) should make it easier. Running instances solo is not the same :)

Cambruin Bango leixicon Indeed. I’m hoping that when the server closures happen it will be much easier to do group content. There are loads of instances (and all the raids) that I haven’t done yet that I want to do at or near level, not solo at 100.

Bango leixicon Cambruin Thought the “not impossible to get people together” part was the important thing there :) Which is ofcourse correct; one can still get groups together. My point however is that it’s nowhere near as ‘easy’ as it used to be and nowhere near as fun either.

Bango leixicon Cambruin Yeah. The instance finder can’t be used to match instances because nobody uses it. That’s Turbine’s fault, they don’t make people want to use it by providing decent bonuses, feedback, etc. The only real option to get group content at level if you’re not in a kin is through world chat, but if the instance finder actually worked it’d be so much easier.

leixicon Cambruin I think Teppic’s point was regarding the instance finder, how it is poorly designed and almost unused as a means to find a PUG, rather than advertising in /world.

The music in bree land always makes me remember fondly my time in LOTRO, which slowly turns to butthurt when I think of what they’ve done to it.

Konuvis shayneary I’m around level 31, I’ll try soloing them now then. Even if it’s slow, it’s better than not doing the quests at all.

leixicon Cambruin Or perhaps we can just acknowledge the fact that the game has been at it’s lowest population-wise, which is a shame, especially given the progress U16 and the team behind it have made. I just hope the damage caused by Paiz (and in part by Sapience) wasn’t too severe…