You know what sucks about getting old? Apart from the adult diapers and the dying? Yeah, it’s the seeing things you love retconned into things that you don’t love. That’s basically the opposite of fun, and so it goes here lately with me and MMORPGs.

Don’t get me wrong; I’m still playing them in the hope that they’ll dial back the casino stylings in favor of fun gameplay and ambitious feature sets.

But really, why would any for-profit development studio do that when a generation of gamers thinks that gamble boxes, cash shops, triple-dipping business models, and pay-to-win are not only acceptable but preferable?

ArcheAge is, of course, one of the genre’s most notorious pay-to-win games. It’s not relative or debatable, either, since XLGAMES and Trion are literally making money from whales who think that spending thousands of dollars acquiring top-grade armor and weapons via the game’s RNG-powered equipment treadmill is a good idea. Unfortunately for me, ArcheAge is also one of the MMORPG genre’s most feature-rich games, which means that every few weeks, I think about returning to it even though I know that all such attempts will end badly.

Distressingly, some (most?) of ArcheAge’s population is OK with its pay-to-win nature! How do I know? Well, the game still has players, for one thing. For another — and admittedly it’s anecdotal evidence — but a quick perusal of the ArcheAge forums invariably turns up posts by thirtysomething I’m-too-busy-to-play types admonishing their anti-P2W counterparts for daring to suggest that games should be played through instead of paid through.

From my perspective, paying for your gear or any sort of character advancement is an extremely short-sighted way of approaching MMORPGs. But I’m seeing it accepted more and more often in games, on forums, and in the blogosphere, and it boggles my mind to see just how many people are falling in line.

You can’t lay the albatross of P2W fully at the feet of players, though. The monetization-before-gameplay culture currently infecting the MMORPG space started with developers.

Look, I’m going to say this as delicately as I can: Most game developers are not your friends. I don’t care how personable they are on Twitter, how many drinks they had with you at that PAX open bar, or how much they purportedly value your forum feedback. You are a number to most of them (or if you’re a journo, they think you’re an unpaid extension of their PR department). And you’re a potential exploding piggy bank to the ones who have sold their souls in the midst of the ongoing monetization revolution.

Few if any of them will tell you the truth unless it benefits their bottom line in some fashion, and it certainly doesn’t benefit a developer to admit that his game is principally designed to drive its users to the item mall. But don’t take my word on developer duplicity. Take a look at what a former Turbine staffer had to say about his experience working on F2P pioneer Lord of the Rings Online.

“There’s a very strong culture of secrecy there that becomes ingrained, especially amongst the rank and file […] This same culture extends to marketing and community relations: never tell the truth, never admit a mistake, silence criticism, contort the facts even if it means blatantly insulting the intelligence of your customers.

The take-it-as-you-can-get-it nature of the industry means that frequently people aren’t necessarily working on the games they would ideally want to. If I were to say a fair number of LoTRO devs and QA would have preferred to have been working on something else, this wouldn’t be some attempt to malign them. It would be a simple statement of fact. Generally you take the work where you can find it, finish the title, and then move on.”

In other words, gamemaking is just a job to a lot of these guys. Some of them may be genuinely passionate about it, but it’s becoming harder to tell given the incessant focus on business model innovation and metrics. Some of us have been saying as much since the start of the whole F2P thing, which inarguably incentivizes publishers to prioritize monetization design over gameplay design. I mean, “convenience” items? Really? What could be more inconvenient than paying extra to sidestep mindless grindbot mechanics that shouldn’t be there in the first place? But we’ve been drowned out by the contingent of MMO players and MMO bloggers who love free shitaki mushrooms and who believe that all progress is forward progress. 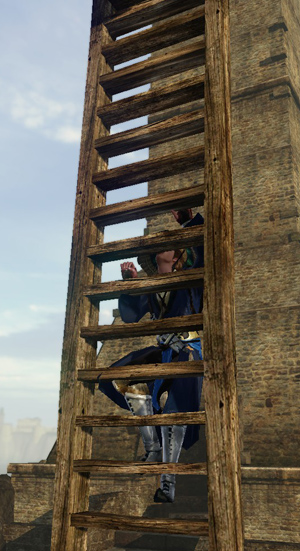 While the MMO industry’s move toward pay-to-win saddens me, I can at least understand the motivations behind it. For developers who make less on average in the game industry than their skills command elsewhere, it’s about putting food on the table.

And gamers are OK with P2W in large part because they’re getting older and they’ve outgrown gaming. They have mortgages, multiple jobs, kids, and a dozen other excuses for circumventing game mechanics with real money.

It’s no longer about the fun or the escapism of gaming; it’s about capturing a bite-sized piece of those bygone days when they had time to play, and of course it’s also about satisfying those psychological skinner box urges that MMOs so expertly and insidiously trigger. The need for that next level ding or that next piece of gear supercedes the need for a balanced, immersive virtual world where acquiring those things take time, effort, and cooperation, and this leads directly to the acceptance of P2W.

A while back, MOP reader CazCore posted one of the most insightful comments in Massively’s long history. I’m going to reproduce it in part here both because truer words have never been written about the MMO genre and because it helps explain why pay-to-win is becoming the rule rather than the exception.

“A fun game is its own reward. Having fun is sticky for healthy individuals. The problem MMOs have is that they have lots of unhealthy addicts who don’t play for fun. They get satisfaction from their virtual work ethic, and doing virtual chores, and amassing virtual collections, because it’s so much easier to do than real life chores/work and amassing real life valuables.

Just stop taking advantage of unhealthy people. That’s all MMOs need to do. Quit targeting that audience and contributing to their problems. What those people need is real progression in their real lives to be proud of. Not some easily quantifiable dings and number increases and virtual item collecting, which gives them a hollow sense of reward for wasting their life away doing mindless busywork.”

When you combine this joyless, exploitative design ethos with an aging playerbase that has more disposable income and less time to engage, you get an environment that’s ripe for pay-to-win. When dinging is the only goal, and when players have demonstrated an obsessive willingness to slog through months or years of repetitive grinding in order to get that ding, of course devs are going to monetize it and in effect sell virtual bridges over the virtual river of crap that they designed in the first place!

So what’s to be done about all this? Nothing much, I suspect. The first step in correcting a problem is admitting that you have one. And MMO players, by and large, are firmly in denial about the long-term benefits and drawbacks of both pay-to-win and F2P. Hell, most people can’t even agree on the definition of the former, so good luck building any sort of consensus for eradicating it.