While Heroes of the Storm just released, Blizzard is not resting on its laurels. The Eternal Conflict is coming, first on the public test realm June 23rd, then in a hoped-for release on June 30th, but the overall push will last a few months.

This expansion has had a quick cadence, especially after Technical Director Alan Dabiri and Senior Artist Phill Gonzales admit that the game’s basically been released in all but name for awhile now. I spoke to the pair at this year’s E3 2015. Read on!

Naturally, the first thing we discussed was the game’s upcoming content. Players will be seeing a special event helping to kick off the conflict: Treasure goblins will spawn in your starting area at the beginning of the match if you have a daily quest. Your team needs to coordinate to kill him as he runs wild and tries to escape. Killing him grants 100 gold per day, making it easier for players to unlock additional heroes, mounts, and skins. 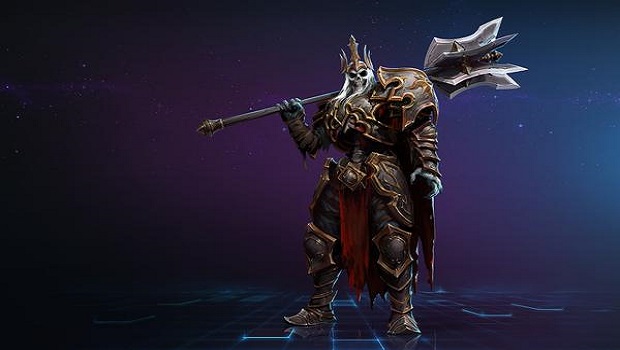 As we’ve previously seen, The Butcher will be the first new hero from Diablo, but the second one will be King Leoric, a warrior who never has to leave the battlefield. Leoric’s trait allows him to become a wraith upon death. He can stay on the battlefield and use his abilities but cannot deal damage. Only his secondary effects, such as slows, will be applied. However, his resurrection timer is displayed for all to see, and when it runs out, he’ll respawn wherever he is standing. Furthermore, any healing Leoric receives from his abilities as a wraith lowers his timer. Note that no other healing effects can be applied to Leoric, such as healing globes or player abilities, so don’t worry about his reappearing too often.

His moves include damage arcing slow, a guidable “spirit walk” that will teleport the physical Leoric through walls and even heroes to wherever the wraith form ends up, and a single target healing “chain” skill shot, which slows Leoric, channeling health from the enemy to the undead king, but can be prematurely canceled if the victim puts enough distance between himself and Leoric. As to ultimates, his first ability creates a U-shaped wall that can be used to either trap enemies or protect allies/chokepoints. His second ultimate takes a moment to begin before Leoric marches forward, dealing high damage in a short march in one direction while in an unstoppable state (stuns and roots, won’t affect him).

While I am personally drawn to the skeletal king and his playstyle, the monk reveal may be more important. The Diablo franchise currently lacks a support class, which the monk will fill after Leoric’s July release. However, the monk’s level 1 talent is actually trait choice: Depending on what your team’s composition is, the monk can shift to fill certain gaps. Need a dedicated support? Trait it. Need a bit more damage? Trait it. The monk is support, but his traits allow him more flexibility in his role. 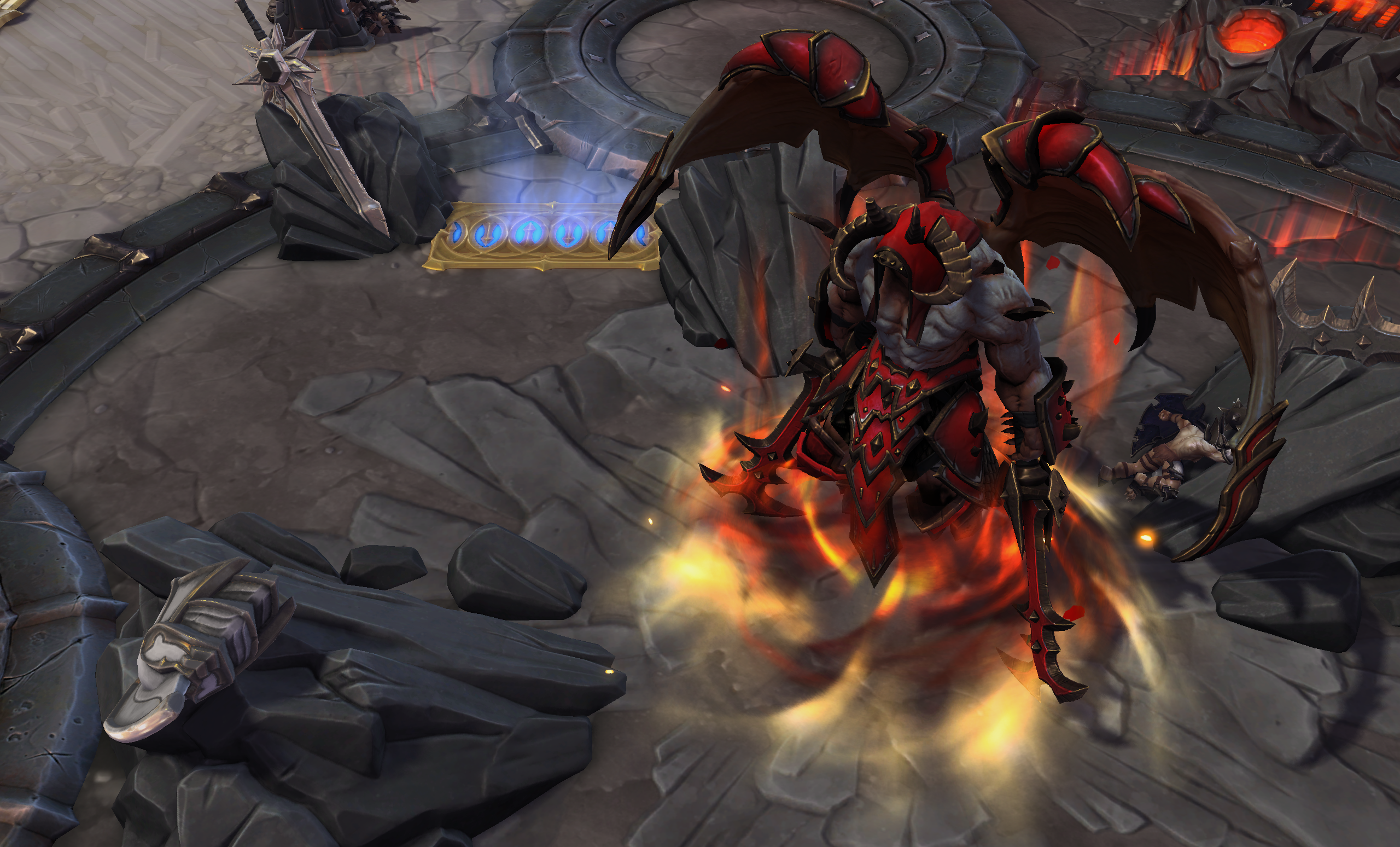 Blizzard’s reps agreed that there is an abundance of Warcraft on the roster, and Eternal Conflict is just the first push towards balancing out franchise representations. No current Blizzard franchise is off the table at the moment — not even Rock n’ Roll Racing.

However, in terms of the upcoming Overwatch, Blizzard plans to wait six months after releases before including characters from the franchise in HotS, though it’s unclear whether that means six months before planning begins or six months before an actual hero is in. I was told, “It would be six months staggered from their release. A lot of these things get worked on early behind the scenes ’cause the hero production pipeline is pretty involved now, so anything we’re planning is super deliberate and months in advanced.” Take that however you wish. The devs do feel their IP and fans make it easier for them to develop heroes than their competitors with unique IPs since there’s already lore and hype to build upon.

I asked about a few rumors swirling around the game. For example, with Diablo 3 being on console now, I was curious about HotS‘s potential to see console play. It is something the team has on its wish list for when the game feels sturdy enough on PC, but there’s obvious concern about how certain things, like the lack of a mouse, may affect the game. Premade loadouts, on the other hand, were in an early version of the game but weren’t polished enough to keep in. And custom maps made by players are still a possibility. Gonzales told me he began his career making his own StarCraft maps just for fun. It’s part of Blizzard’s heritage, but it’s not clear how or to what extent we’ll see it. 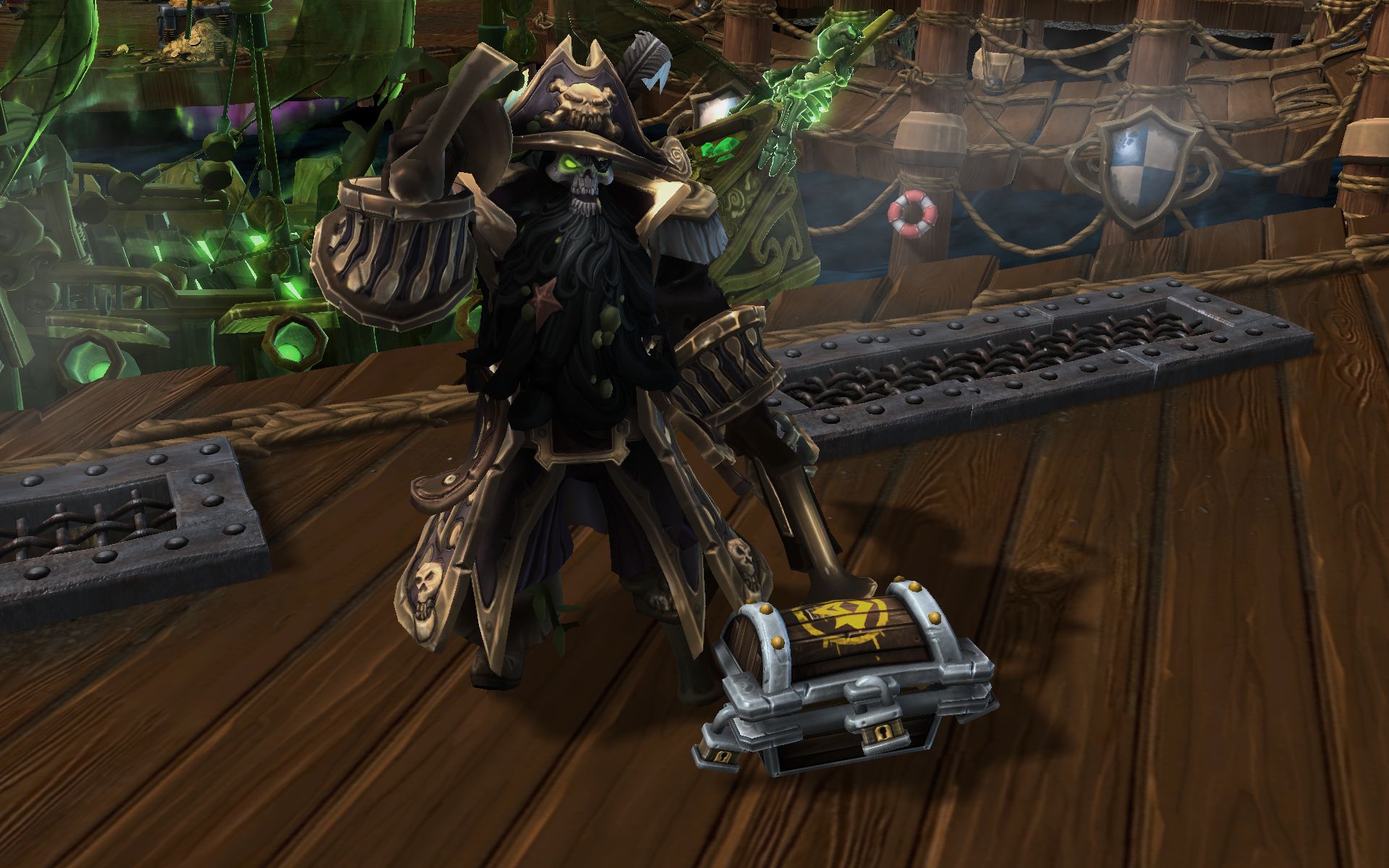 I also asked about battlefields. I’ve never loved Blizzard lore because it often gets ignored in favor of mechanics and is filled with constant pop-culture references. The upcoming Battlefield of Eternity is sensible enough, as is Sky Temple. However, Blackheart’s Bay and Garden of Terror mystify players. Why does the pirate tell us where his gold is, and then ask us to give it back to him? Why does the plant mistress tell us to “take back [her] seeds” from the plants she calls her children? Maybe worrying about lore in a MOBA is silly, but my interviewees promised to pass on the complaint. In fact, Gonzales told me, “I think there could be a really cool opportunity here to now create the entire backstory of those battlegrounds and make full on stories about them.” Lore might not provide much gameplay benefit for most players, but it does create stickiness, and if it works well enough, maybe HotS might get its own cross promotion with one of its original battlefields included in another IP (Blackheart’s Bay for an Overwatch or Diablo Halloween event map, perhaps?).

Finally, I had to ask about the free skins. Not every MOBA just gives away customization; in fact, selling cosmetics is generally a key way MOBAs make money. However, both Blizzard reps told me they wanted to give players some options. Skins that are easier to make have value but are easier to hand out freely to players, especially reskins and color variations. As fighting game fans, they feel it’s the least they can offer, and they enjoy it too. Plus, they’re a cool progression reward.

There’s a lot coming to Heroes of the Storm in the immediate future, and Blizzard seems to have quite a list of things to do to not only balance out the franchise roster but grow the MOBA in ways that the genre as a whole hasn’t yet touched.